With Monster Hunter Rise’s first, major content update, Capcom has brought down upon us all the ultimate mark of dedication: Hunter Rank.

Previously, playing through Rise’s Gathering Hub story would guide you along to HR7. This involved taking on a number of hunts from a certain set before moving on to an Urgent Quest and ranking up. It’s standard fair for the series, as is this process of unlocking it.

Once you begin playing through Rise’s 2.0 content, things will work a little bit differently. While Rise is still growing, there’s a new endgame that will see the Hunter Rank cap climb from 7 all the way to 40 and beyond. This both shows your dedication to the grind and could be the barrier of entry to future content as well. Read on to see what this roadmap is, some helpful tips for the returning Elder Dragons, and how to keep raising your rank once you’re fully uncapped. 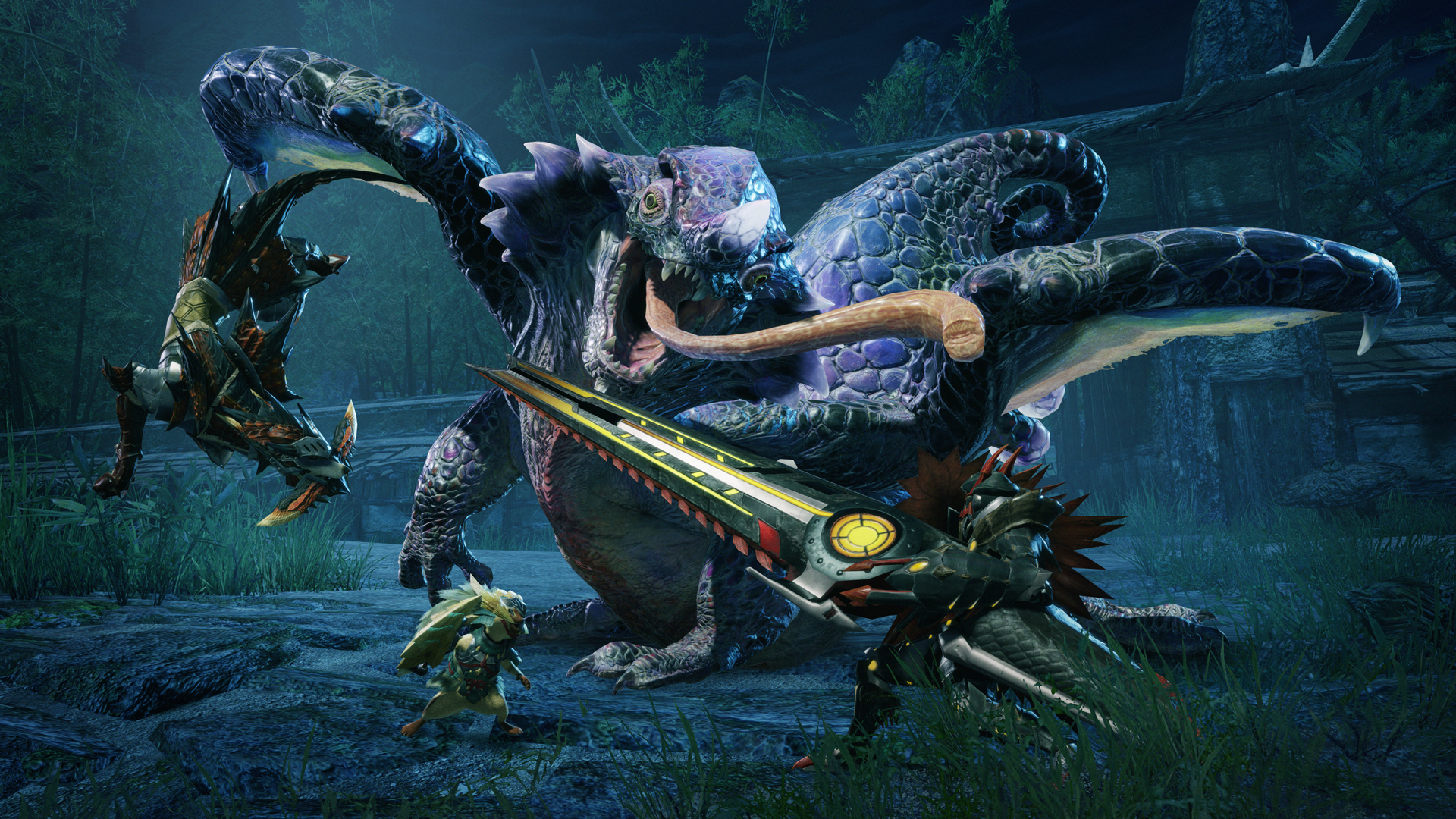 There are two steps to playing the newly added content. The first is to slay the base game’s final boss monster to get to HR7. The other is to simply download the latest update, which should be Ver.2.0 or higher. Once both these conditions are met, you should be prompted to speak to Guild Master Hojo at the Gathering Hub for the first of multiple HR unlocks and your new assignment!

Rise’s version 2.0 additions are in one, clean line of progression. You’ll complete the following in this order:

This represents the necessary steps of this rollout, though there are a few other notable additions. If you’re already HR7 you’ll be able to take on new High Rank quests. The majority of these feature new combinations of monsters as targets (including quests that unlock two new Petalaces) and the addition of Event Quests, but the following represent new monsters and their requirements.

The most significant roadblocks in the game now are the trio of Elder Dragons that have been added. Each one is a benchmark on your road to fully uncapping your Hunter Rank, and have some unique qualities when compared to other monsters (and each other).

For one, Elder Dragons cannot be captured. These forces of nature need to be put down, and are completely immune to both Shock and Pitfall Traps. This does have the benefit of facing them online being a little clearer – everyone will be on the same page because slaying is the only option.

Despite this (and unlike Apex Monsters), Elder Dragons can be mounted and ridden. That means your Silkbind attacks can and should be put to use along with other Wyvern Riding tools to let you control them for a limited time. You should also take advantage of riding other monsters on the map during an Elder Dragon quest in order to grab those extra materials!

Lastly, the three Elder Dragons all share a decent weakness to Dragon element damage. If you’re the type of hunter that enjoys having an all-purpose weapon, that’ll be your best bet for the whole set. Each has more severe weaknesses to other elements or notable issues with statuses, though, that will be touched on further down.

How to fight Chameleos 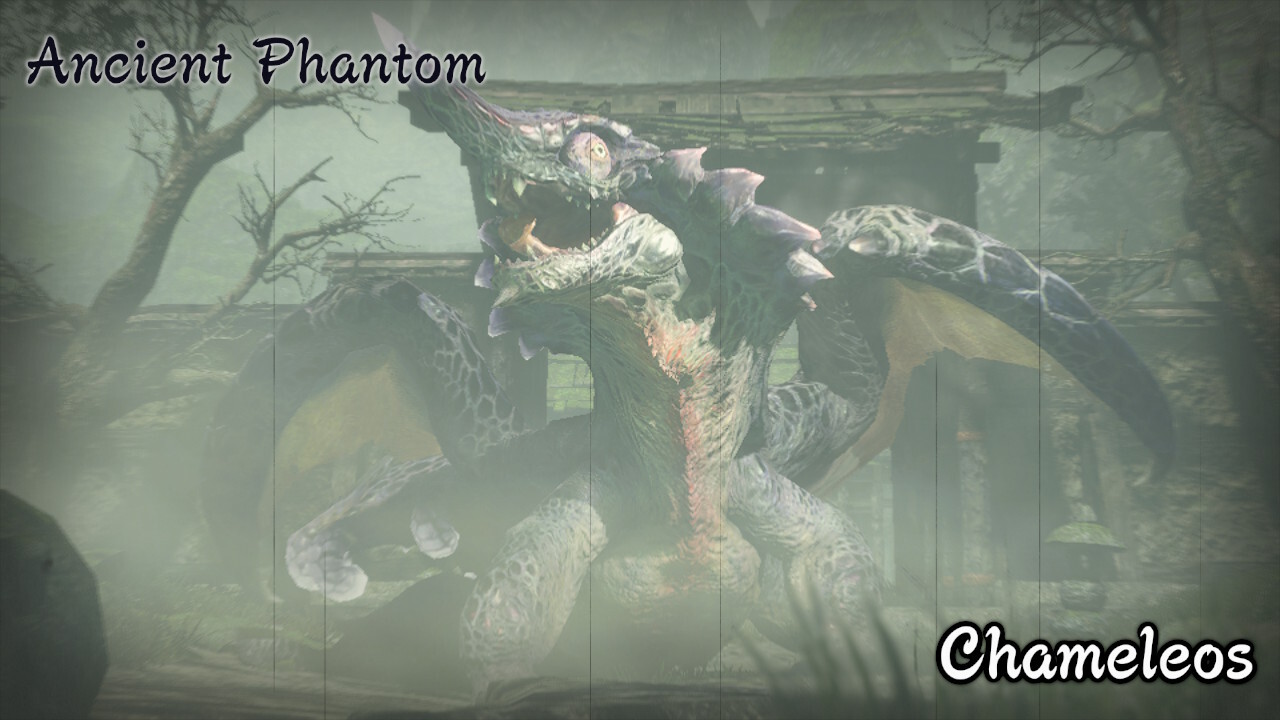 The first of the three new Elder Dragons you’ll encounter is Chameleos, in the Shrine Ruins. As the name implies, it’s heavily based on the chameleon in its design and capabilities. Its main, distinguishing trait is its ability to become invisible. It uses this to try and confuse hunters and pull off sneak attacks, though most of these are from it suddenly repositioning and then attacking rather than fighting while concealed. Inflicting it with various blights will keep it a little more visible at these times as well, with fire being Chameleos’ main elemental weakness.

There’s no gear that prevents this element of the fight, but by breaking its horn you can hinder this trait and more easily keep tabs on it. Its other abilities include a reliance on poison, and the ability to steal from hunters using its tongue. Unlike past games it won’t be able to steal items, but instead will take away your Spiribird buffs/pollen. Its main poison attacks are also the faster acting venom (similar to Apex Rathian), making antidotes of poison resistance important.

How to fight Kushala Daora 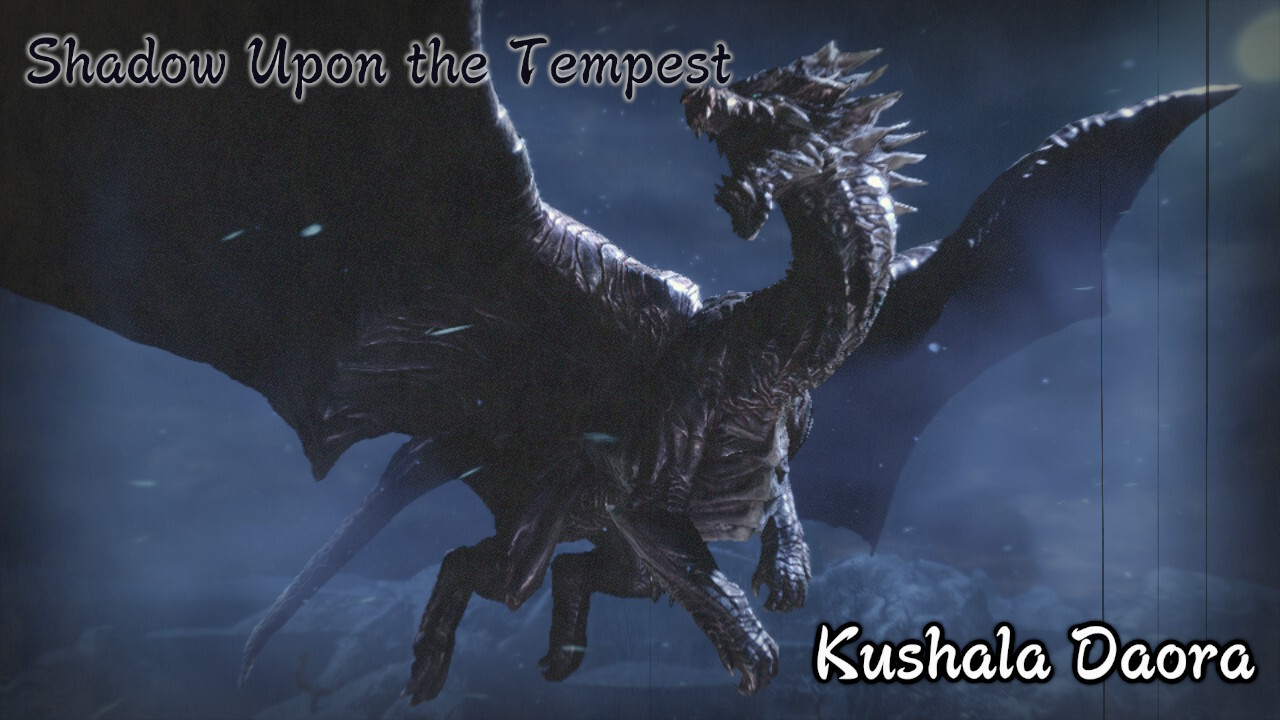 After beating Chameleos and raising your Hunter Rank higher you’ll be able to fight Kushala Daora in the Frost Islands. Of the three it spends the most time airborne, and uniquely among most monsters utilizes powerful winds to attack. These include whipping up whirlwinds with its wings, and a devastating tornado fired from its mouth. You’ll likely find yourself airborne multiple times from its gusts, so be sure to use Wirefalls well to avoid follow up attacks and land more comfortably.

Kushala Daora’s hide is also quite hard, being metallic in nature. You’ll want a weapon with high sharpness or Mind’s Eye to help with that. Even those won’t help when it veils itself in black wind, which gives it a barrier against both ranged and close attacks. This can be dispelled by poisoning it, so be sure to grab Poison Kunai from the supply box or come with a proper weapon to take advantage of that. Likewise, its airborne nature makes it susceptible to Flash Pods, which will cause it to crash down to the ground if used while it’s flying. This leaves it vulnerable for a bit, though it’ll build up resistance to this over time. 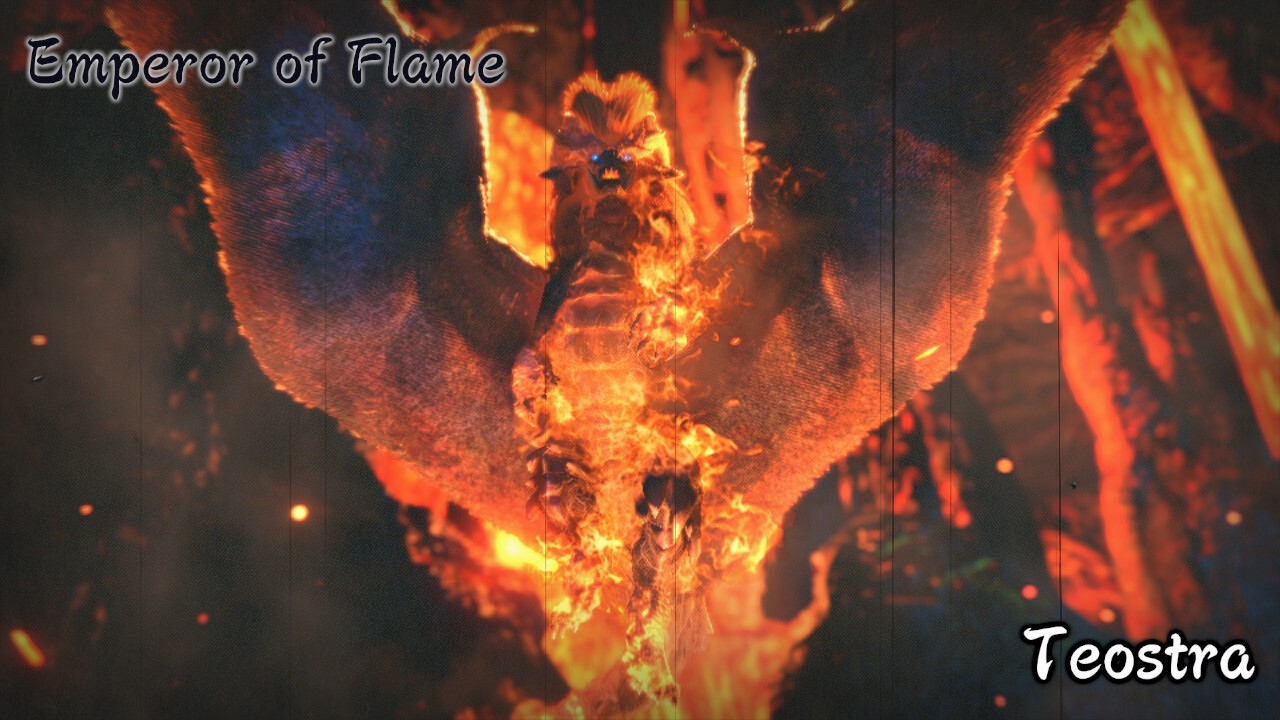 The final challenge (for now) is Teostra, lord of flames who’s made its home in the Lava Caverns. While it does bring considerable fire power, it’s more notably from Blast attacks rather than direct flames. Teostra’s defining ability is to scatter particles around itself that it’ll then ignite in large scale explosions. Avoiding these clouds of dust is your first priority throughout the fight, though it has some other tricks to contend with. Come ready with Deodorants for Blastblight, and take advantage of its Ice and Water weaknesses.

For one, being too close to it will damage you over time thanks to heat that it emanates. Don’t hesitate to back off for a bit to heal up, but be sure you’re doing so clear of any potential explosions. There’s one attack you’ll need to watch out for in particular, where Teostra hovers and draws power into itself, before triggering a massive Supernova in the surrounding area. Learn to recognize this behavior and make as much distance as you can when you see it! Similarly to Chameleos’ horn, breaking Teostra’s head will weaken these natural abilities.

One last, interesting element of these three Elder Dragons is that in Rise they’re designed as counters to each other. Think like Pokemon types, or the Fire Emblem weapon triangle. You won’t fully be able to take advantage of this when you first encounter Chameleos, but if you find yourself struggling once you unlock Kushala Daora (and likewise for Teostra) you can grind the weapon and armor set of the previous Elder Dragon in this trio to help.

With respect to weapons this is fairly clear. Chameleos weapons are poisonous, letting it more easily block and dispel Kushala Daora’s black wind veil. Kushala Daora weapons are of the Ice element, giving them an edge against Teostra. Teostra weapons break this pattern somewhat, as while Chameleos is reasonably susceptible to Blastblight it isn’t its prime weakness. That said, the Teostra armor is definitely worth wearing when you take on Chameleos, as are the armors of the other Elder Dragons.

Each of their three armor sets has a skill known as a Blessing. These have been seen on other sets in Rise, such as the armor from the final boss, but each of these three Blessings is a hard counter to a specific Elder Dragon, increasing in potency with each skill level. You can also access these skills via Ramp Up skills on their associated weapons.

Kushala Blessing gives percentage based buffs to ice and water damage, though its third level is notable for extending the amount of natural healing (the red portion of your health bar after getting attacked), letting you exceed this and continue healing so long as you aren’t struck. Lastly, at max level it negates passive damage from heat, most notably that from Teostra.

Teostra Blessing brings things full circle. It starts with buffs to fire and blast buildup before getting into specifics. This will make you immune to poison and venom, while at full it’ll prevent theft. This makes it the perfect protection against Chameleos.

The full benefit of this triangle can’t be utilized until you’ve already slayn all three of these Elder Dragons at least once, but for anyone interested in grinding their parts with a little extra protection would benefit from utilizing these skills.

How to grind Hunter Rank in Monster Hunter Rise 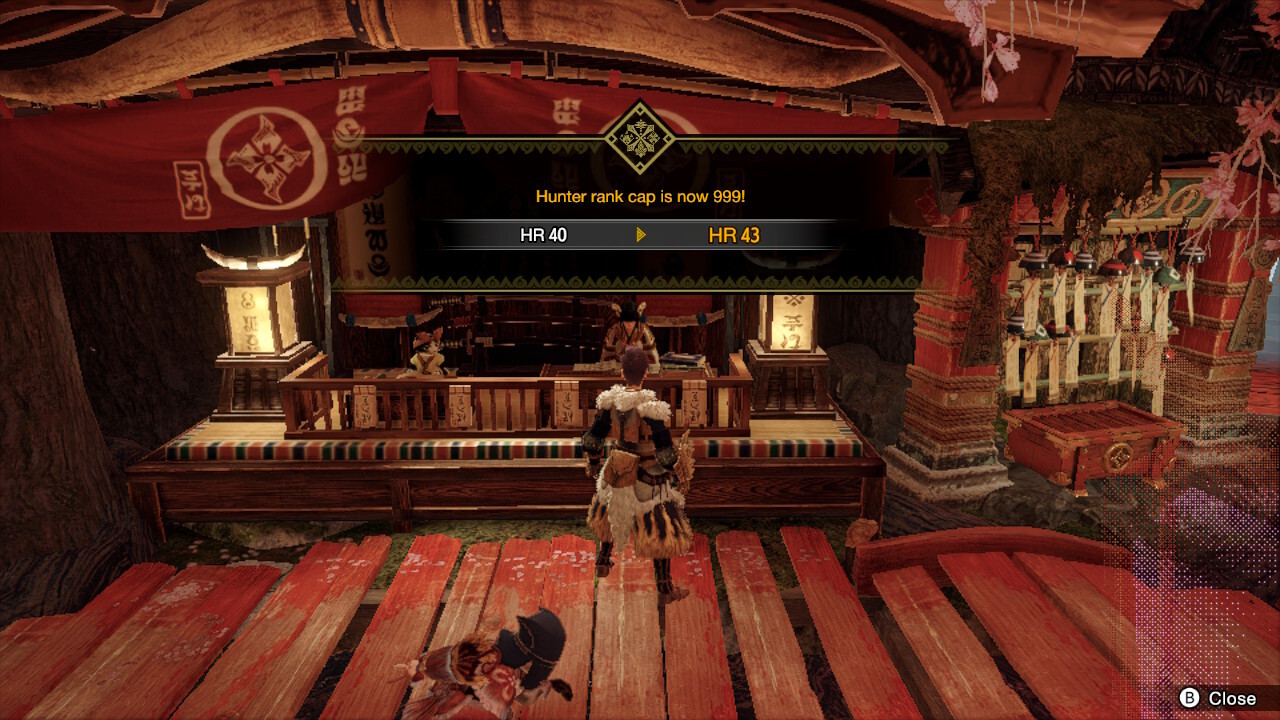 As a rule of thumb, the higher rank a quest or Rampage is, the more HR it will grant. That means taking on High Rank quests with multiple monsters, Apex Monsters, and Elder Dragons are usually the best way to push your Hunter Rank higher. For Rampages, the better you perform (in terms of subquests and final ranking) can alter the amount you receive.

With that in mind, the highest yield appears to come from Rampages with Apex Monsters where you manage to get an S+ ranking. That said, these might be difficult or time consuming so they may not be the most efficient. They do help with grinding Talismans simultaneously, though, so depending on your needs it could be the best option.

Once you’ve hunted Teostra and fully uncapped HR, you can theoretically reach the maximum of HR999. At present there’s no incentive to do so, and will likely never be for grinding that high. That said, you will want to keep moving forward with it in the interest of future content. Apex Mizutsune hunts only open once you’re HR45, so it’s reasonable to assume Apex Rathalos, Apex Diablos, and any completely new additions to Rise would also be gated behind HR threshold. 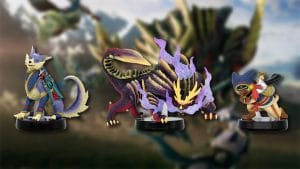 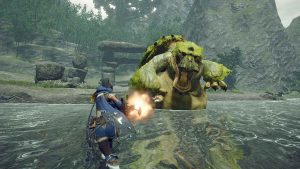 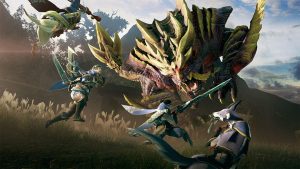 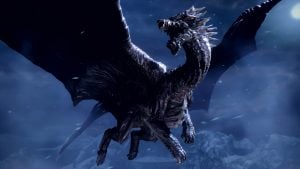 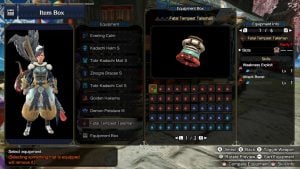 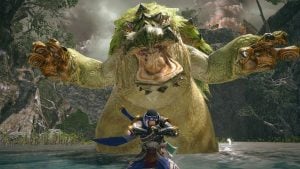