People live and die for their favorite Pokémon starter, and I would die for Sobble

Which team are you siding with for Pokémon Sword & Shield? All three starters have just been announced, and each fighter is waiting for you to choose! Read below if you’re on board with Team Sobble. And check out our Team Grookey and Team Scorbunny articles if you want to check out the competition!

Well Trainers, we’re well on our way to yet another adventure in the Pokémon world. Pokémon Sword and Pokémon Shield were announced this morning, and along with the announcement, we were introduced to all three of Galar’s Starter Pokémon: Grookey, Scorbunny, and Sobble.

Try as he might to hide from view, I managed to spot little Sobble in that fountain and knew that he was going to be my new best friend. When it comes to starters, amphibious Water-type Pokémon can do no wrong — there’s a reason that Mudkip and Froakie are among my overall favorite Starter Pokémon. Sobble, the Water Lizard Pokémon, is going to fit right in. 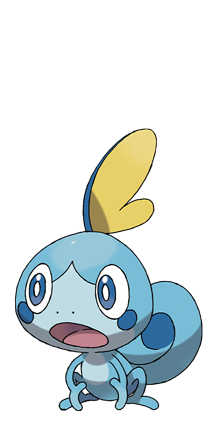 He’s a little timid, sure, but a Timid Nature is hardly a bad thing for a water Pokémon; the boost in Speed is helpful for running away from any big, scary Grass-type Pokémon he might stumble across. That whole hiding-in-the-water bit that Sobble pulled off so well in the trailer? It’s a great strategy for keeping yourself safe while attacking from a distance — provided he’s not fighting any Electric-types, but sometimes you’ve gotta learn the hard way. Plus, as a Starter Pokémon, Sobble has two evolutions ahead of him. Plenty of time to grow out of that timidness by his final stage.

Perhaps Sobble will come out of all this as a strong and confident Komodo dragon Pokémon? Or maybe he’ll double down and get more timid as time goes on, and learn to use it to his advantage, fighting opponents by hiding and attacking from the shadows. Only time will tell what Sobble is going to be, but for right now the poor little guy just looks like he needs a hug, and I’m going to give it to him.

See what others are saying about Grookey and Scorbunny, and let us know what your favorite is! Be on the lookout for more Pokémon Sword & Shield news as we set out towards its release later this year.