People live and die for their favorite Pokémon starter, and I would die for Grookey

Which team are you siding with for Pokémon Sword & Shield? All three starters have just been announced, and each fighter is waiting for you to choose! Read below if you’re on board with Team Grookey. And check out our Team Scorbunny and Team Sobble articles if you want to check out the competition!

A new Pokémon generation is always packaged with tough decisions. Which version to get and which starter to choose? Sometimes we only have split seconds to choose and others opportunities can let us plot out our path months ahead of the games’ release. With this morning’s announcement of Pokémon Sword & Pokémon Shield for the Nintendo Switch, we were treated to a glimpse of our Galar region companions.

Your candidates for Generation VIII are Scorbunny (the speedy fire rabbit), Sobble (a timid water salamander), and Grookey (cheeky grass chimp). Who will you choose? By all means, join me and proclaim Team Grookey!

Ever so curious and resourceful, Grookey was the Pokémon to close out the trailer for Pokémon Sword & Shield. A leader, the little chimp reversed the damage Scorbunny did to the lush grass. I do appreciate Sobble’s aid in putting Scorbunny’s embers out, but Grookey took it one step further thanks to a dose of growth magic. Taking the initiative, Grookey has already proven why it should be number one in your party from the get-go. 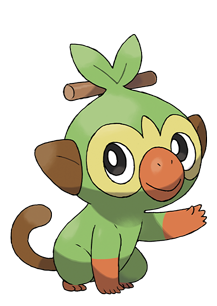 Plus, if you’re a longtime Grass starter supporter, you may notice that Grookey is taking a few nods from the previous Grass-type starters. Taking “hair style” cues from Chikorita, Turtwig, and Chespin, Grookey is changing it up ever so slightly with a stick-turned-hair-accessory. Thank you Rowlet, for inspiring the next generation to dress up and learn to accessorize their wardrobe! Throw in Bulbasaur’s determination and kindness, Snivy’s calm attitude, and Treecko’s protective nature — and we have a stellar representative for Grass-type Pokémon family.

I’m already smitten with today’s glimpse of Grookey’s personality. While trying not to get too ahead of myself, I do wonder what the complete evolution chain will look like. The stick that Grookey used to call attention must be incorporated somehow — jokingly a staff in this sword and shield generation. Its ability to climb heights and the chimp classification may mean we can possibly see a powerful Pokémon battle tank as its final form, yet it’ll probably be agile enough to scout in the treetops.

Regardless of Grookey’s evolution chain, Shiny version, and other forms, I already know that later this year I’ll be picking this starter Pokémon as I explore Galar. Will you do the same, too?

See what others are saying about Sobble and Scorbunny, and let us know what your favorite is! Be on the lookout for more Pokémon Sword & Shield news as we set out towards its release later this year.