The latest issue of Japanese magazine CoroCoro has leaked, and in it comes details of an Ash Hat Pikachu distribution slated for Japanese copies of Pokémon Sun and Moon.

The distribution involves special Pikachu wearing hats based on the hats worn by Pokémon anime series protagonist Ash Ketchum during his adventures across the franchise’s numerous regions. 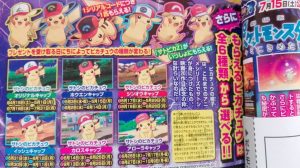 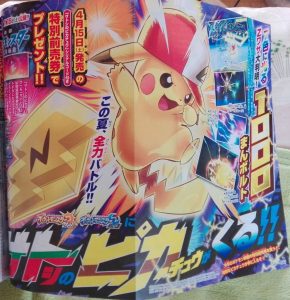 Serebii.net reports that Ash Hat Pikachu can be obtained by pre-booking tickets to the upcoming film Pocket Monsters the Movie: I Choose You!.

Those who pre-book their tickets will receive a one-time redemption serial code that will allow them to receive a Pikachushumium Z-Crystal within the games, as well as the ability to download the various Ash Hat Pikachu throughout the rest of the year:

Pocket Monsters the Movie: I Choose You! will be released in Japan on July 17th.

There has been no announcement made regarding a release for the film in other regions, but stay connected to Nintendo Wire for more news as it drops!