No Man Is an Island: How Animal Crossing: New Horizons brought us together over the last year

March of 2020 simultaneously seems like it happened only yesterday and a lifetime ago. Many of us had been looking forward to it for months in anticipation of the next title in the Animal Crossing series after a release date delay pushed the launch out of 2019. Animal Crossing: New Horizons was set to arrive on March 20th with plenty of brand new features offering players more control over their game than ever before. Eager fans made plans to attend midnight releases and gather together to play with one another, and it was a reasonable expectation that the launch would make waves, thanks to hype for the series reaching an all-time-high. After all, we hadn’t seen a mainline Animal Crossing entry in nearly eight years. 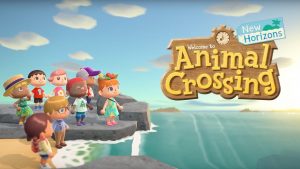 What we weren’t expecting, however, were the circumstances that would help the easy-going life-sim have a launch that was larger-than-life and go on to take the world by storm. Early 2020 ended up having more in store than just Animal Crossing: New Horizons, however, and by March the COVID-19 pandemic had made its way to nearly every country on earth, prompting stay-at-home orders and quarantines across large parts of the globe in hopes of keeping as many people as possible healthy and alive. As timing would have it, while the COVID-19 pandemic forced the world to hunker down in their homes, Tom Nook was inviting players to get away from the turmoil with his Deserted Island Getaway package.

Animal Crossing: New Horizons quickly became a cultural touchpoint not just for fans of the series, but for the entire world. Friends who I had never imagined touching a video game were suddenly raving about it; celebrities were using it to interact with their fans and create content; brands, political campaigns, and protests all found some way to take part; and the Metropolitan Museum of Art even got in on the action by releasing a tool that allowed players to access its entire digital collection as downloadable designs. As social distance mandates were enforced and people began to quarantine, sales of Animal Crossing: New Horizons and Nintendo Switch systems skyrocketed to unseen heights thanks to people searching for any way they could connect with one another. 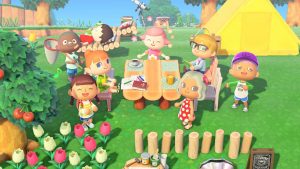 More than simply a tool to connect with one another, however, Animal Crossing became a way to escape the uncertainty and isolation of the COVID-19 pandemic. Sure, plenty of people were still able to connect on social media, and Zoom hangouts absolutely exploded in 2020, but when the world came to a grinding halt, Animal Crossing gave us more than a way to connect with our friends and family. What it gave us was a way to actually do something with them.

Early on, in order to have some semblance of a normal life, my wife and I went on a virtual-date to my island’s museum.

When you can't go out, you go on an #AnimalCrossing date instead. #ACNH #NintendoSwitch pic.twitter.com/B2SFyyLNFi

We also spent many evenings on the phone with family members, often for hours, while touring each other’s islands, fishing, catching bugs, and racing around, and those times were some of the best memories I made last year. What I, and hundreds of thousands of other people, had discovered was that Animal Crossing was giving people a way to hang out and interact in a way that felt more authentic and engaging than any Zoom call by giving people a way to actively play together rather than simply highlight the fact that you couldn’t physically be together. Players designed intricate games of tag, obstacle courses, mazes, and even their own minigames. This many people coming together thanks to the pandemic pushed the game to evolve within its own boundaries, even outside of officially sanctioned seasonal updates, providing a sense of community during a time when no one could really go out and be a part of their own communities. 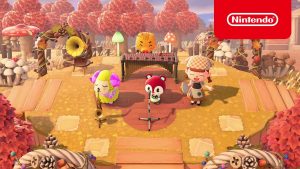 Besides the inventions and evolutions provided solely by the players, there were also seasonal updates that helped keep the game fresh. As more content was introduced, players were provided with more to bond over. Last April’s update brought us Crazy Redd and his not-always-authentic, and sometimes haunted art, and players went wild trying to collect all they could for their museum’s galleries. Summer brought us swimming and diving, and players even found inventive ways to play with that new feature, with many creating diving boards off the sides of their islands using the new landscaping tools offered by New Horizons. Summer also brought the Dream Suite, allowing players to easily show off their islands to the world without having to take the time to actually host anyone. These seasonal updates continued to drop as we moved into the holiday season, allowing players to gather in Animal Crossing to celebrate holidays like Halloween, Thanksgiving, and Christmas when they couldn’t gather in person.

Even now at the one year mark, players are getting creative with new content. The Super Mario Bros. 35th Anniversary update brought Warp Pipes, Mario’s iconic blocks, and more to the game, and players are using them to create fun transitions, new randomized minigames, and transform their islands in new ways. The party didn’t stop there, with the latest free content update releasing on March 18th, bringing with it the characters and items from the Sanrio amiibo card set, more design slots and design types for players to share with one another, and the return of everyone’s favorite egg-monger, Zipper T. Bunny. 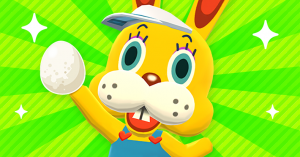 There were, of course, benefits to individual players as a result of taking part in this massive community, and one of the most prevalent was dealing with the in-game Stalk Market. In the early days it seemed that everywhere I looked on the internet, somebody was talking about Turnips and their prices. Players flocked to each other’s islands in hopes of both buying from Daisy Mae at the lowest price and selling for massive gains. Entire subreddits and websites were set up to help players connect with one another to sell Turnips or to track their own prices. It was obvious that some people were also looking to take advantage of the Turnip boom by charging exorbitantly high entrance fees on their islands or harassing players who refused to leave sizeable (or even outrageous) tips for the trouble of opening up their islands to Turnip sellers, but the large majority of the online interactions I’ve seen in regards to Turnips were easy-going and friendly even if islands got a little crowded at times. I got out of the Turnip game relatively early, but I’ve still got a few million Bells sitting in savings thanks to some high-priced Turnip sales.

First day of work from home went surprisingly well. I only opened up #AnimalCrossing once to check turnip prices during lunch.

Whether you found a community of Turnip traders, built island-spanning obstacle courses, or simply used it to spend more time with your family, Animal Crossing: New Horizons brought a lot of good to a world in turmoil over the last year as a result of what can only be described as the world’s most impeccable release timing. It gave people a way to celebrate birthday parties, weddings, and graduations despite the inability to gather in person. It gave players a way to feel productive and build a perfect little life on an island away from the world, molding it to their wants or needs with new landscaping tools. Looking back on the last year, Animal Crossing might have been just the thing a lot of us needed to get through the pandemic, because the active interaction that it offered was something that a lot of other communication options didn’t have, and it helped people forget that we couldn’t be together. COVID-19 has impacted the world in a big way, but the impact that Animal Crossing: New Horizons was able to make in spite of the pandemic made being stuck at home a lot more bearable, and it’s going to be remembered as something incredibly special because of that.