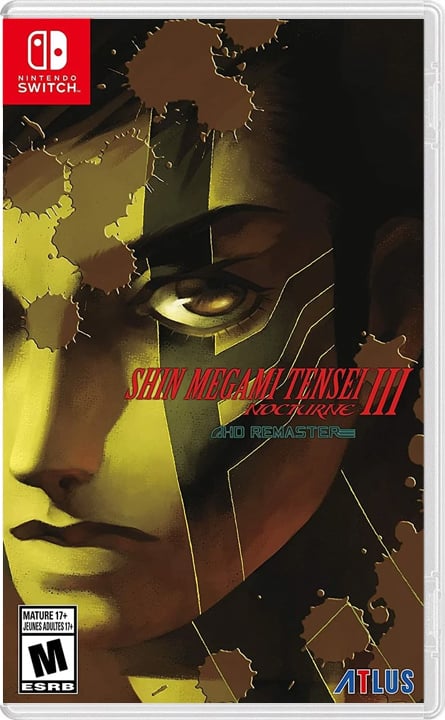 The PlayStation 2 brought the world several top class RPGs. Many either started new franchises on the system or saw older classics take massive leaps thanks to the new hardware, with Atlus coming out in full with some of their best. The Persona series began its break out into the mainstream on the PS2, but much of the groundwork had been laid first by its parent franchise a few years earlier.

Shin Megami Tensei III Nocturne was the entry point for many into this world of demon negotiation and apocalyptic happenings, and it still comes up as a gold standard of dungeon crawling and monster capturing. Now it’s gotten another chance to change the world via this HD Remaster, putting its gameplay to the test with some stiff competition from the very games it influenced. Read on to learn what to expect after the end, how you’ll be putting the powers of a demon to use, and if it still holds up today. 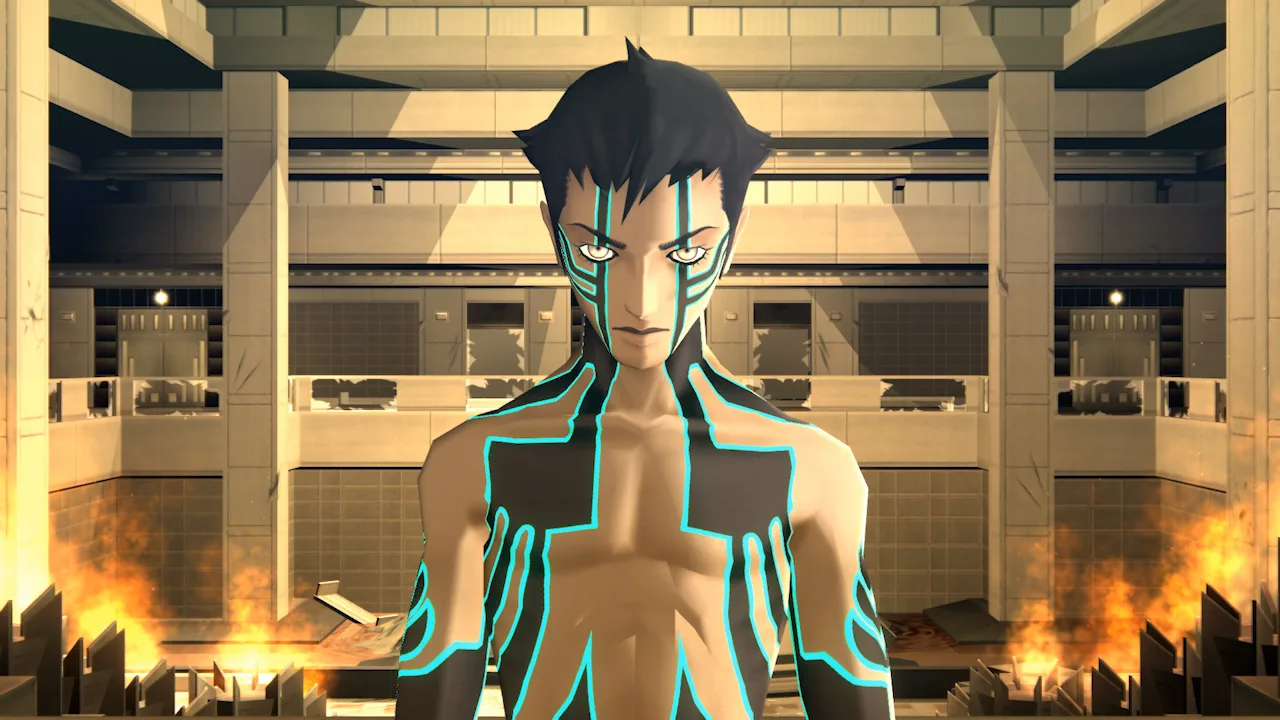 If there’s one thing Shin Megami Tensei III (and really, the whole series) has in spades, it’s atmosphere. No other series presents the end of the world and the diametric tug of war that often results from it quite like MegaTen. That world building and plot progression is enhanced by spectacular character designs and music, bringing these demons and the encounters with them to life flawlessly. From the mascot-like Jack Frost all the way to archangels and high fiends, there’s a reason these varied creatures are still being used in the games to this day.

For this HD Remaster, Atlus has also brought on a redone localization and a voice cast for the first time. The new script keeps things to more contemporary standards, and having main characters speaking to each other adds to the experience. That also goes for redone textures, with most work going into character models. Environments can still show their age, though it’s more often the occasional framerate drop that risks pulling me out of the Conception’s immersion.

I challenge you to a duel

The vast majority of your time in Nocturne is spent navigating its various dungeons. Fittingly, these range from dilapidated remnants of old Tokyo to technospiritual anomalies, and blend well with the established vibe of the game. Exploring them is fairly typical for the genre, but props up the real selling point of the series – its battle system and demon summoning mechanic. 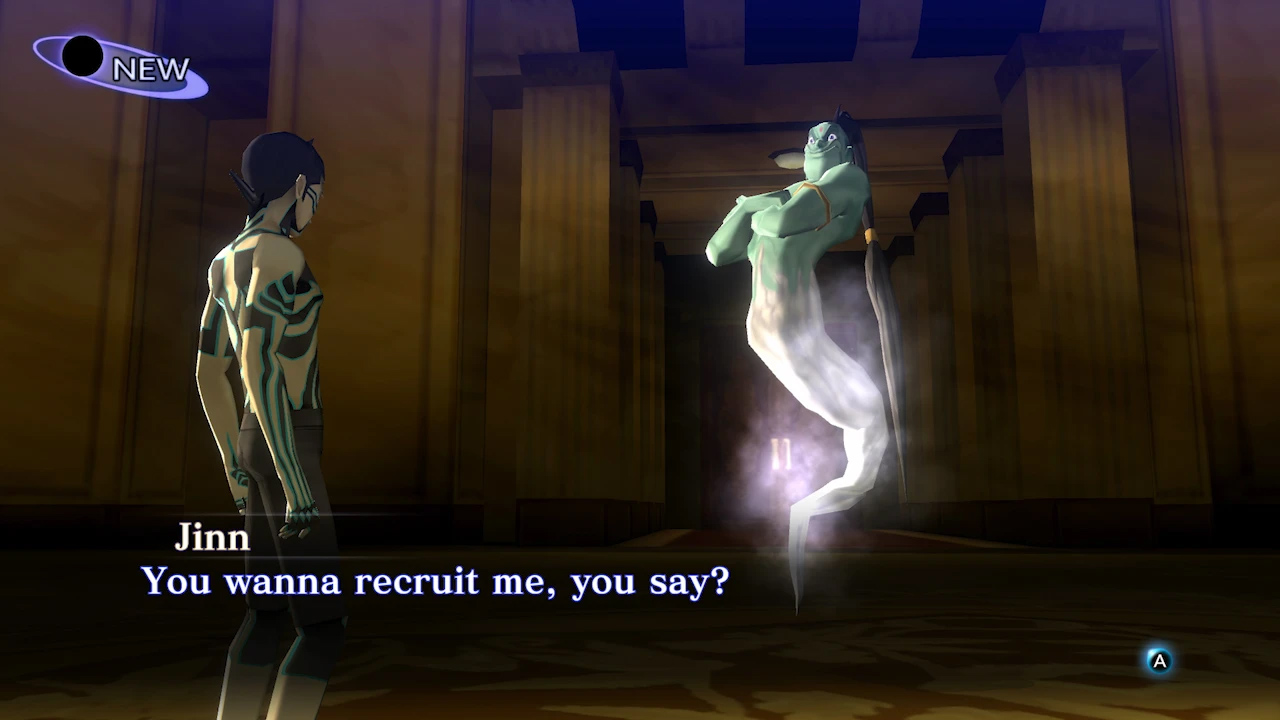 Nocturne originated the Press Turn system, which would grow and adapt to the “One More” mechanic of the Persona series. By exploiting enemy elemental weaknesses or triggering critical hits you’ll gain extra actions on your turn, letting you continue to attack or affect enemies before they have a chance to retaliate. Good thing too, as if you ever let a mob of even lower-level demons get the jump on you it’s going to be felt.

MegaTen games are known for their difficulty, and Nocturne is no exception. While a new Merciful option has been added for anyone that just wants to experience the story and world, I highly suggest playing at least on the standard difficulty to see why fans are still terrified of a skeleton dressed as a bullfighter all these years later. Whether its a boss you weren’t prepared for or a surprise encounter with a new demon, Nocturne will be trying to kill you every step of the way. 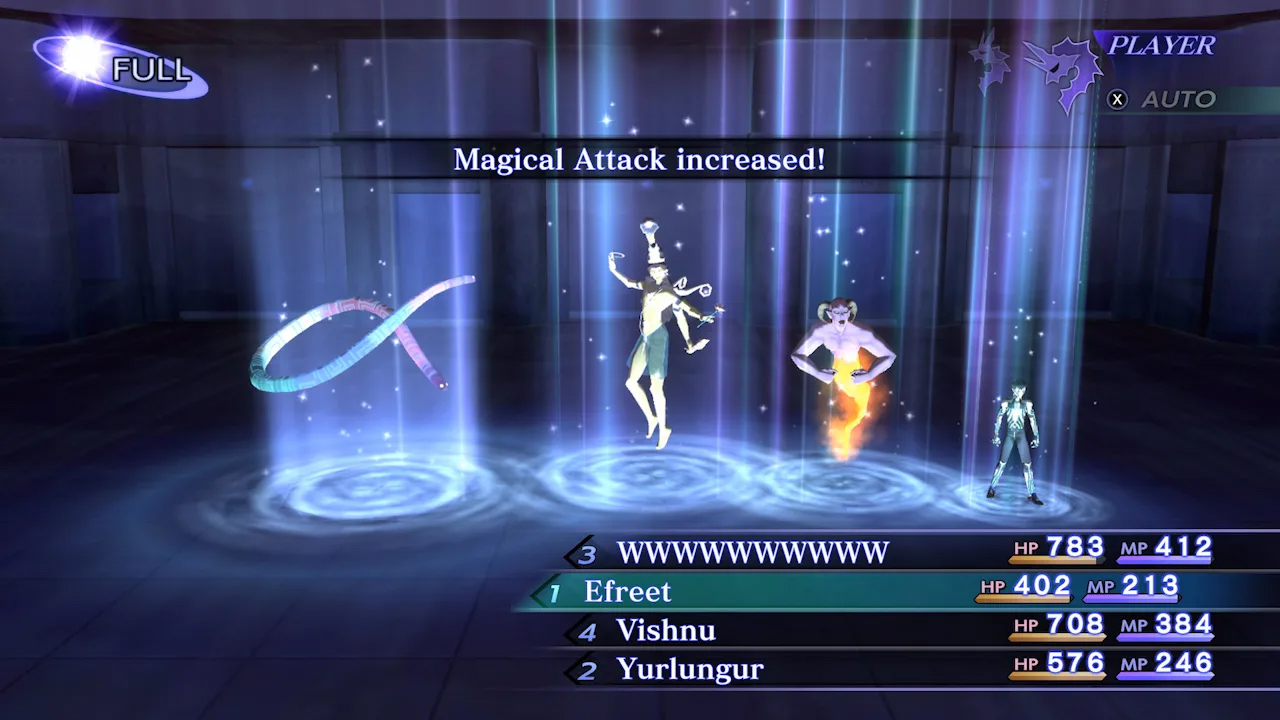 By playing smart and maintaining a balanced party of your own demons, you can make things a whole lot easier throughout the game’s entirety. I’ve always felt that comprehension and attention to your party is the real “game” in Shin Megami Tensei and Nocturne’s take on it manages to be particularly rewarding and investible. This mostly comes courtesy of the Demi-fiend being both in on the action and highly customizable himself via key items called Magatama.

These parasitic creatures are the progenitors of your powers, with dozens found or purchased throughout the game. Each Magatama alters your stats towards its focus, perhaps granting you bonus strength or magic abilities. These would leave them as simple equipment if not for how they impart skills as you level up the Demi-fiend.

All the Magatama have a set of skills that you’ll learn once you reach the appropriate level while having one within you. By changing your Magatama regularly you’ll quickly make the Demi-fiend into an even more potent force, with tons of potential. If you want to be completely focused on physical attacks, you can absolutely do so. On the same note, you can spend some time leveling up with a magic focused Magatama to gain extra SP, then pivot into buffs and debuffs to make him a dedicated support character. These ample possibilities make seeking out Magatama and figuring out your Demi-fiend one of the most engrossing aspects of Nocturne. 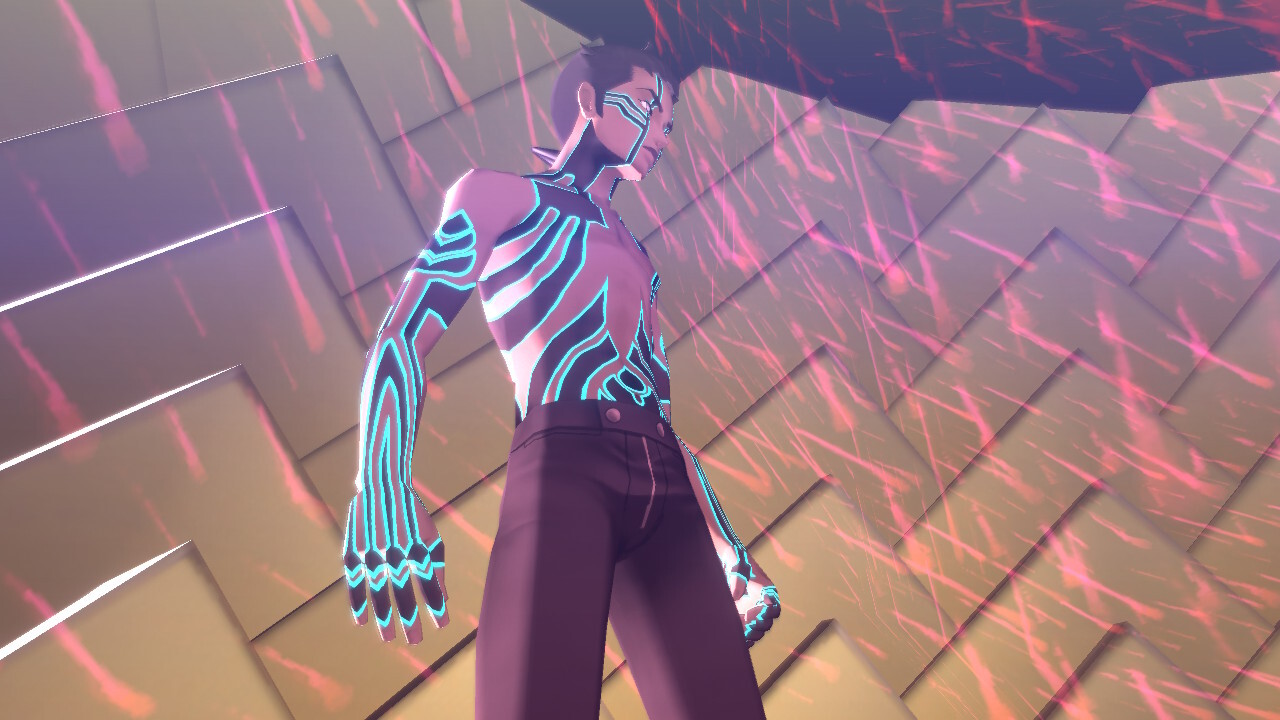 Where skills and such become slightly more tedious is in just how much random chance there can be. Negotiating with demons, another mainstay of MegaTen, is here and while there is a logic behind conversation and action choices it still takes a lot of trial and error to recognize it. There are other things to consider, like demons that are only recruitable during a specific frame in a constantly cycling phase tracker in the top left corner, or demons that utterly refuse to talk to you only to suddenly beg to join you sometime later. These range from flavorful to frustrating, but is such a core part of the experience that it’s eventually warmed up to.

Nitpicks and random chance (and random encounters) aside, I put hours into my party at various points of this playthrough. It’s easy to lose track of time when you see you’re so close to a skill you know will be a big help or because you want to test your latest Magatama. Even when a skill would transmute into something less than ideal or my level up would backfire, these systems never felt like they needed to be removed – just weighed as potential outcomes. It’s no stretch to say Shin Megami Tensei has one of the most involved and addictive battle and character raising systems in all of RPGs, and Nocturne’s maintains its legacy even now. 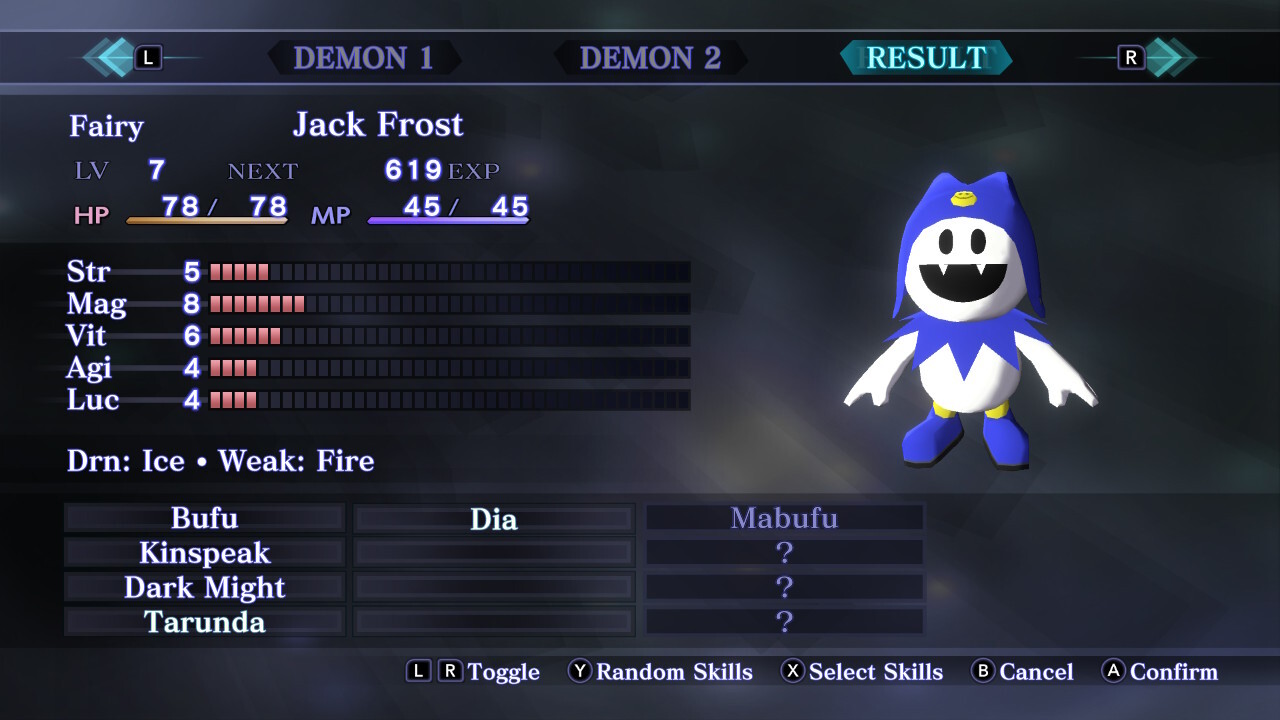 Of course, recruiting and raising your demon hoard will only get you so far. It’s by fusing demons at the Cathedral of Shadows that you’re able to push your collective power (and collection) further. This has its own suite of mechanics and possibilities, though it is now possible to select which specific skills are passed on to the resulting demon. Considering how much time and effort can go into tailor making an ideal ally, this is welcome and appreciated and marks the biggest step forward for Nocturne HD from a gameplay perspective.

Outside of shaping the skills of you and your demons, the main choice with Nocturne is how you’ll influence the birth of a new world. The apocalypse happens within the game’s opening hours, and though you (being part demon now) can’t actively shape this genesis you can support multiple key characters’ visions of how things should be. These Reasons replace the more MegaTen typical Law vs. Chaos alignments but do align with them in some ways. 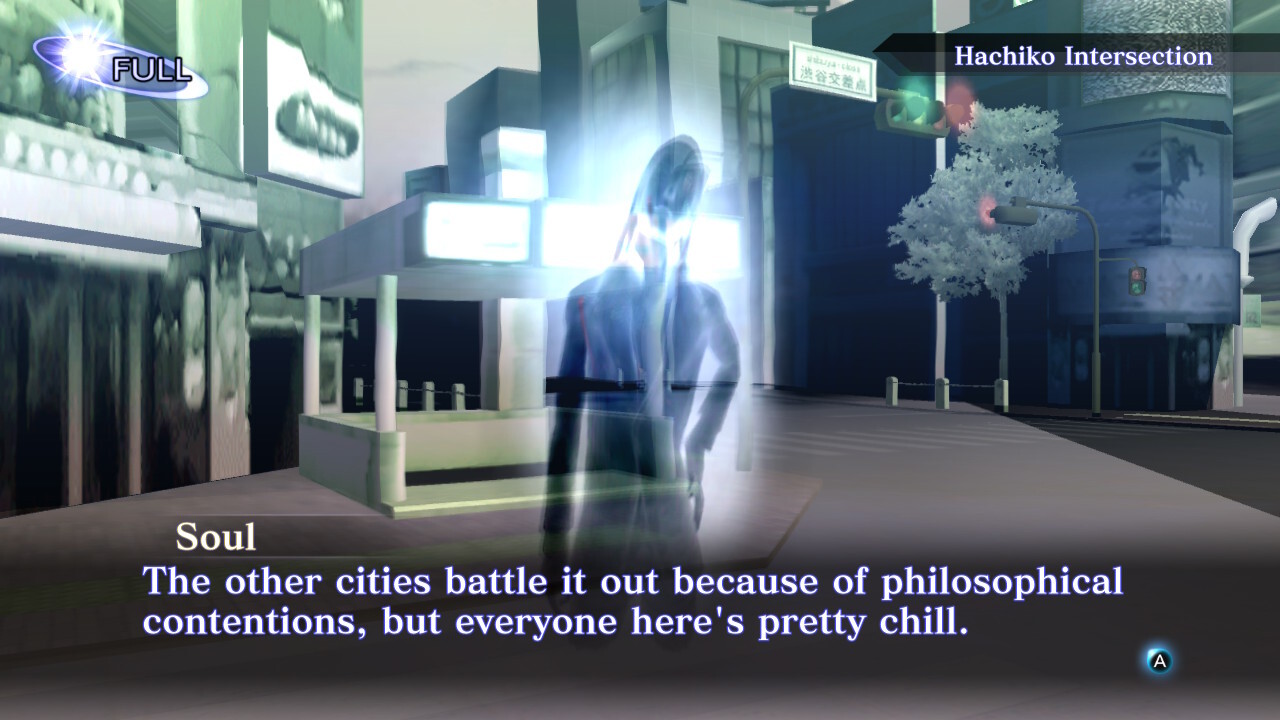 As an approach it works – the idea of your backing being the deciding factor was always an appealing one. While you as a player will have your own views on how an ideal world should be or which character is the most appealing option, the multiple endings all have the potential to be satisfying in their own way. This includes some more difficult to access ones based on optional content, giving Nocturne a grand total of six. This, and the heavy variability in demon acquisition and their skills, gives the game hundreds of hours of replayability for those willing to end the world again and again.

While the following is nothing new to anyone familiar with the Megami Tensei series compared to the Persona series, I do feel it worth mentioning. Compared to its stylish spinoff successor, MegaTen is a much slower and introspective narrative. There is a plot and cast here, but generally it’s about how you reflect on them that shapes your time with the game. The themes rather than the characters are often the star of a given entry. Anyone looking for Social Links or shared experiences should be aware those aren’t here. It’s instead a thought provoking and solitary journey, with your demons the only set company. This helps make MegaTen what it is, and if you haven’t experienced the series then I highly recommend Nocturne as a gateway.

Perhaps the only real shortcomings of note from Nocturne HD is that it really isn’t that extensive a retouch. Several PS2 era games have come along on Switch (such as the Devil May Cry series, that one from the sticker), and even when they also didn’t add much they usually came at a more affordable price point. I don’t mean to short-sell the added voice cast or those who worked on the new localization, as those are welcome and appreciated and carry the nearly two decades old story well. I also love my RPGs in portable/handheld form, so the Switch port is worth it for me on that merit alone. There’s just a sense that as far as quality of life improvements, more could have been done.

Ultimately, there isn’t much that improves the gameplay itself here. One of the most notable additions, being able to select skills when fusing demons, only came about post release in Japan via an update. This is definitely a good thing, but begs the question of what else could’ve been added (a mini-map, please) to further bolster a game that occasionally shows its age despite being timeless in so many others. A new quick save option has been added as well, but it’s of the “one time use” suspend style, perhaps to better maintain the game’s difficulty while still allowing you to bookmark on the go. As it stands, you’re still getting a PS2 game on a modern system. How “worth it” that is will be up to you, but I’d say that when the game is this particular one it’s more than worth considering. 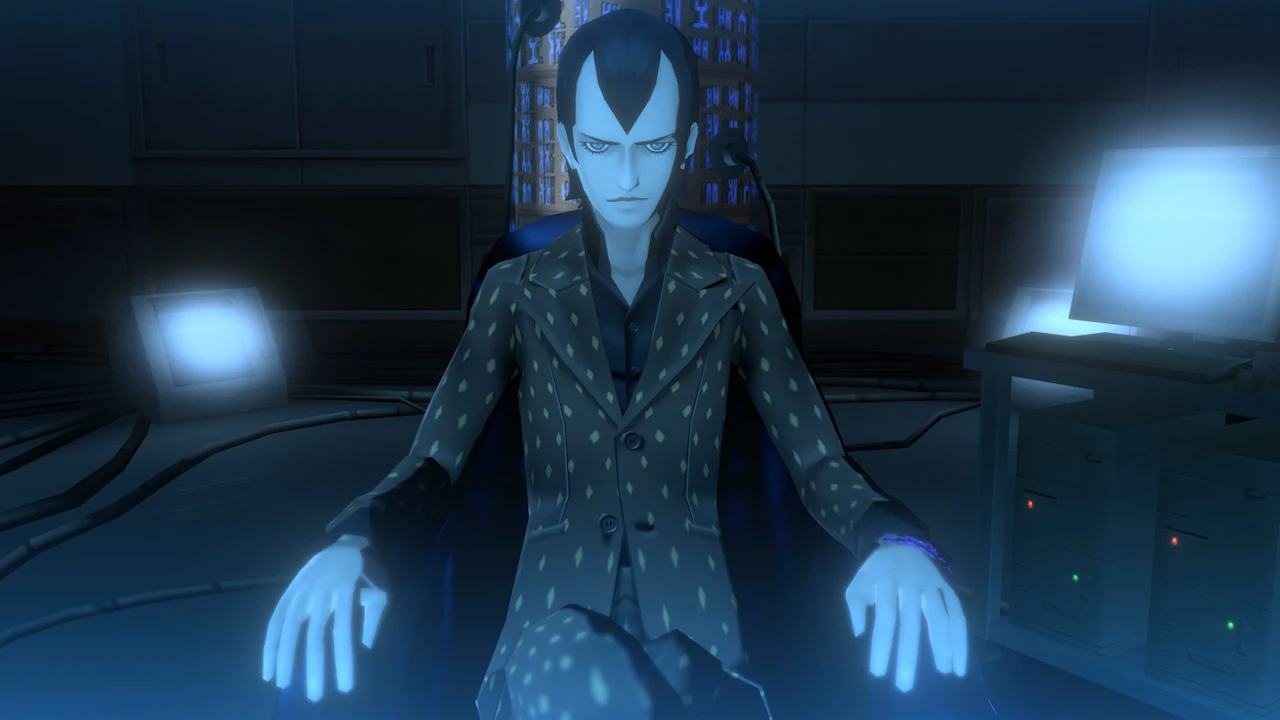 When taken with its various DLC, you do get the content of every Shin Megami Tensei III release in one place, including access to both Dante and Raidou cross-over characters. This is a great get for diehard fans, and with additions being minimal, the overall intent behind this and the earlier mentioned decisions may’ve been more towards preserving the original versus “enhancing” it. It’s also worth noting a brand new Shin Megami Tensei is due on Switch before the end of this year, Shin Megami Tensei V, and I’m eager to see their contrast once it arrives. In the end I’d call this adherence to the original a compliment towards Nocturne, a game that (along with Persona 3) helped push MegaTen’s appeal outside of Japan and is rightfully held up as a pillar of its series and genre.

When judged outside the context of being a remake, what makes Shin Megami Tensei III Nocturne so beloved absolutely holds up. Its combat system is foundational, and even without the modern flourishes of its descendants all the way up to Persona 5 it’s engaging and addictive. Developing demons is engrossing, with the added elements of improving the Demi-fiend himself and fighting alongside them making you feel more involved throughout the entirety of a playthrough. That, paired with its unique setting and heavy themes make for a journey as compelling as the philosophies that inspire it. For the core Shin Megami Tensei games, Nocturne is still the finest the series has to offer.