The Legend of Zelda: Tri Force Heroes is now 5 years old, and I still haven’t beaten the damn game

Be completely honest. You forgot all about The Legend of Zelda: Tri Force Heroes, didn’t you?

It’s OK, I get it. We’re in a golden age of Zelda right now, with fans still making discoveries in Breath of the Wild over three years after its release, the fantastic 2019 remake of Link’s Awakening being a dream (get it?) come true for nostalgics, and Cadence of Hyrule making history as the first-ever indie-developed Zelda title. That’s to say nothing of what’s on the horizon, with Hyrule Warriors: Age of Calamity a mere month away, the highly secretive Breath of the Wild sequel (hopefully) coming soon, and The Legend of Zelda’s 35th anniversary in February 2021 — and after all the surprises from Mario’s 35th, expectations are high.

Among all that excitement, it’s easy to forget about poor little Tri Force Heroes, which launched five years ago last week in the U.S. and Europe. 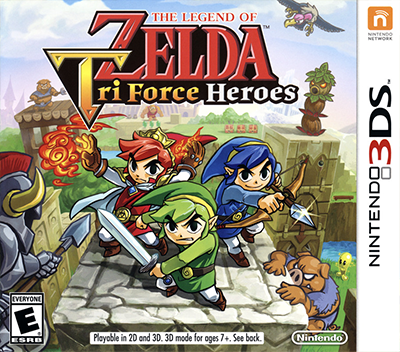 It was by no means generally received as a bad game. We gave it a fair score of 7.5 in our review, and most critics gave the game similar ratings. This is The Legend of Zelda we’re talking about, however, a landmark series which routinely pulls in nines and tens for its game reviews. Tri Force Heroes has a Metacritic score of 73, which is the lowest score awarded to a mainline Zelda game on the site.

Again, I get it. I wouldn’t even blame anyone for saying it’s their least favorite Zelda. Me? I never even finished the game.

That said, not seeing the game through to the end wasn’t an active choice on my part, or a form of protest. I love Tri Force Heroes. The challenge is getting others to love it too.

Tri Forcing your friends to play this one

If you’re not familiar with the game, Tri Force Heroes is very different compared to most other Zelda games. This time, the adventure demands three legendary heroes instead of one, with the gameplay revolving around co-operative multiplayer. It felt very much like a successor of sorts to the Four Swords games, and as a Four Swords Adventures fanatic, seeing another co-op Zelda finally emerge in 2015 was incredibly exciting to me.

It all started off well: I got the game at launch, as did two people I knew. If you’re keeping up with the math, that makes three players! Perfect. Sure enough, we played through a great portion of the game. There were some lagging issues along the way, but the puzzles were top notch, the bosses were a blast, and accidentally throwing each other into the abyss never got old. To top it all off, spamming those adorable little in-game emotes was both hilarious and a surprisingly effective way to communicate with each other. 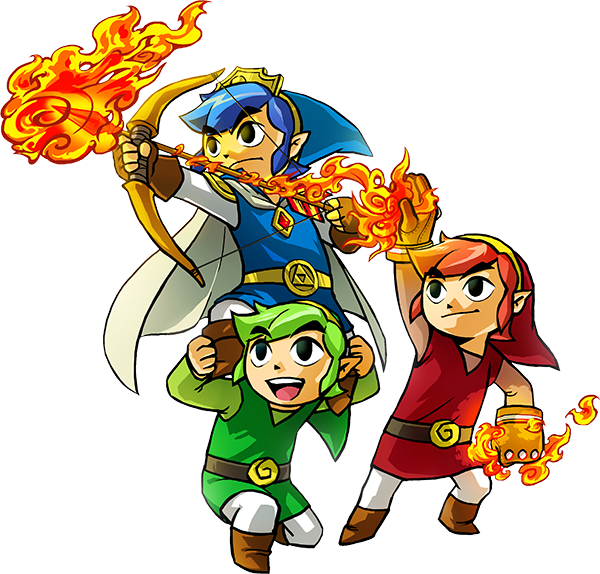 However, as we reached The Dunes, the sixth of the eight areas in the game, the difficulty began to spike. Falls and deaths became more frequent and less funny, and restarting each stage started to feel more like a chore than a challenge. Around the fifth-or-so “Game Over” screen, we agreed, “Let’s try this again another time.” But we never did.

Getting friends together to play through an entire game’s story mode can be difficult enough when you need to rely on people with their own 3DS and a copy of the game, let alone making time to play when you’re a group of adults with conflicting schedules. Throw in boredom and a lack of motivation among said players, and that pretty much spells the end of a playthrough.

This didn’t seem like a big deal at first. I’m a longtime staff member at Zelda Universe, and as you can imagine at a Zelda fansite, all of the staff were also playing Tri Force Heroes. The game supported online play, and having many online friends who were enthusiastic about the game, I was in luck — or so I thought.

The problem was that there were limits on who you could play online with, as Nintendo imposed region locking on the multiplayer. As a Brit, this made it impossible for me to play with my fellow colleagues, who were almost all based in the U.S. 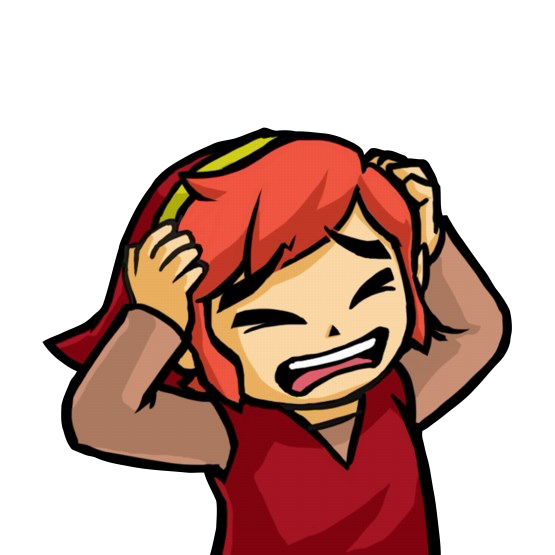 It was frustrating to say the least. Why on earth would Nintendo do this? As far as I can tell, the company has never given an official explanation. If I were to guess, I’d say that Nintendo were most likely concerned with keeping lag to a minimum by preventing people playing across regions, allowing for a smooth gameplay experience for as many people as possible. It would make sense for a co-operative and communication-heavy game such as Tri Force Heroes, though I wish Nintendo had taken a risk in this case and at least made international play an option.

It’s funny and kind of tragic that, in a game that lets you venture across many fantasy lands, it firmly places borders in the real world.

Solo is a no-go

Of course, Tri Force Heroes does have a single-player mode, and with only two worlds left to conquer in order to beat the game, I decided to give it a try, given that it was my only remaining option. The thing is, the game is optimized for and centered around cooperative play, and the single-player mode doesn’t do much to deviate from that style of gameplay.

When going solo, you alternate control between the three Links. When controlling one, the other two stand in place as “Doppels,” creepy, wooden-doll figures that wait for Link’s soul to possess them. They have no artificial intelligence, which is a blessing in some sense, as they can’t wander off into danger or take danger — but it also means that you’ll be doing all the work in a three-hero job. 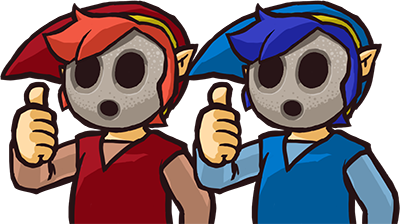 I finished a few levels this way. It’s a clever mechanic and it works just fine, but it does mean that gameplay slows to a crawl as you have to navigate all three heroes through each level yourself. It can be tedious getting each Link into position when solving puzzles, and fighting all of the game’s enemies and bosses on your own. It’s nowhere near as fun as playing with others, where the experience feels much more natural and exciting.

That’s where I put down Tri Force Heroes. It pained me so much to leave a Zelda game incomplete, but it seemed right to walk away before I soured the experience. There was no point ruining all of the fun I’d had up to that point by grinding through the remainder of the adventure with the inferior play style.

Surprised that five years had already passed since Tri Force Heroes and I parted ways, I dusted off my 3DS the other day and booted up the game. I mainly wanted to remind myself just how far I had progressed in the story, but I must admit I got sucked into playing for a while. I had missed those gorgeous, A Link Between Worlds-style graphics popping in 3D, the smooth combat and satisfying sword swipes, and the charm of the game’s kooky characters. It was bittersweet remembering how fun this game was, but realizing I’ll likely never have that optimal co-op experience again.

I would love to see the game ported to Nintendo Switch with a less restrictive online multiplayer mode, just to have another chance. Of course, I don’t think it’s likely; when it comes to remakes and remasters, I can almost guarantee that Tri Force Heroes is at the very bottom of Nintendo’s priority list, and buried under all of the brand new Zelda projects undoubtedly in the works. Hopefully, however, Nintendo will consider a sequel or a successor in the future.

Abandoning Tri Force Heroes was like ending a relationship on good terms: We had a great time together, and while it didn’t work out in the long run, there’s no bitterness and now I can reflect on the good times. After some time apart, I’m even entertaining the idea that maybe we could make it work again. In any case, I still love you, Tri Force Heroes — even if no one else does, and even when you make it hard to. 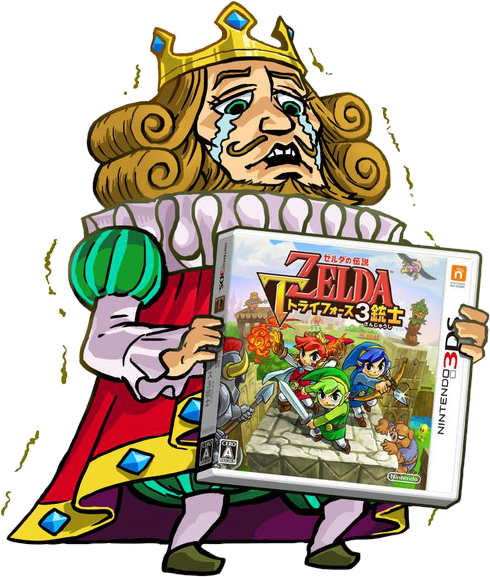