From Mario invading Rabbids to Star Fox barrel rolling through Atlas, Nintendo’s no slouch when it comes to licensing out their franchises to third-party developers. The Legend of Zelda in particular has been around the block a few times, having three mainline entries — Oracle of Ages, Oracle of Seasons, and Minish Cap — developed in collaboration with Capcom. Never before, however, has the Big N lent out the keys to the Kingdom of Hyrule to smaller independent developers… until now.

The lucky cuccos who landed the gig were Brace Yourself Games — famed developers of the rhythm roguelike dungeon-crawler, Crypt of the Necrodancer. I know what you’re thinking. “Da heck’s a rhythm roguelike? And why would I want that anywhere near my precious Zelda?” Fortunately, I’m here to tell you to chill and shut your Octorok hole, because as it turns out the game’s absolutely mind-blowing. In fact, I’d go so far as to say Cadence of Hyrule is a must-play for fans of rhythm games and Zelda alike, whether a seasoned veteran or your first time dabbling in the dark arts of Necrodancy. 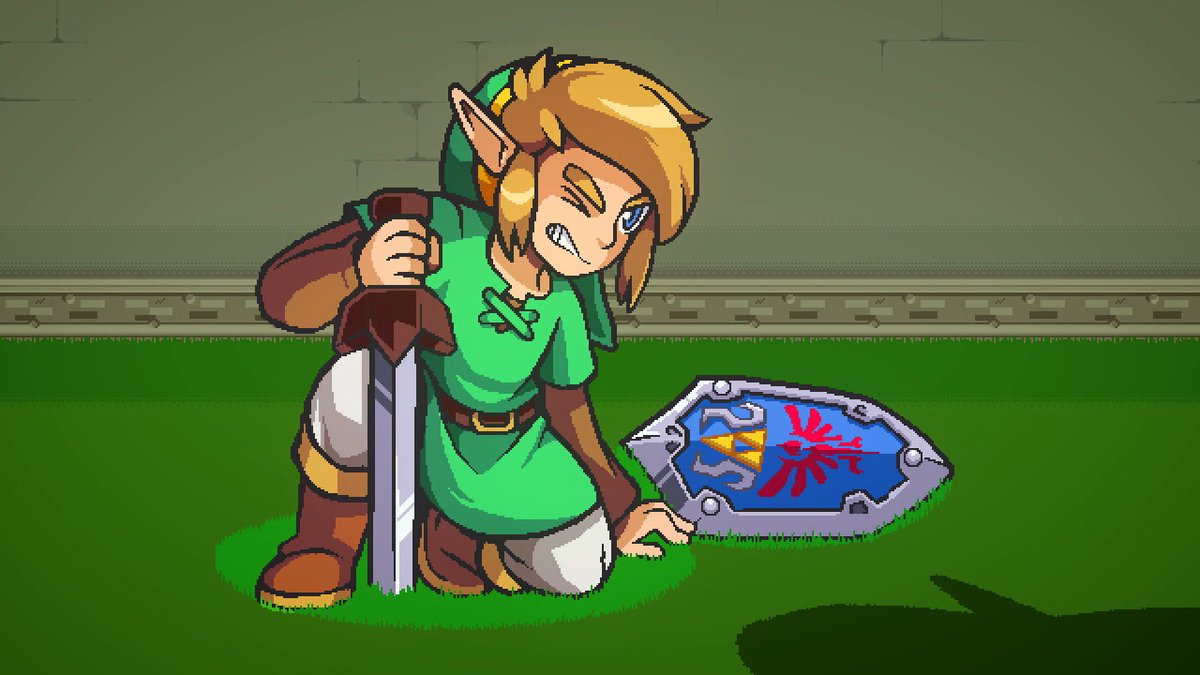 THE HERO OF RHYME (AND RHYTHM)

As alluded to just above, Cadence of Hyrule combines the rhythm roguelike gameplay of Crypt of the Necrodancer with characters, settings, and music from The Legend of Zelda. Using the D-pad (or thumbstick if you feel so inclined), players hop in harmony along a grid-based world while fighting baddies, all in search of four enchanted instruments with the power to save Hyrule.

It’s important to note that this is just as much a sequel to Crypt than it is a spinoff for Zelda. When it comes to gameplay, everything from movement and combat to the very weapons you wield scream Necrodancer, albeit in a much more polished art style. That said, classic Zelda elements seep into every nook and cranny of Cadence’s design. From the onset of your adventure players choose between Link or Zelda, each possessing exclusive abilities, and are then free to explore a massive overworld reminiscent of A Link to the Past — complete with towns, shopkeeps, hidden caves, and dungeons.

With the exception of Hyrule Castle, and because the overworld is randomized after starting your adventure, dungeons can be tackled in any order the player pleases. Classic items like Bombs, Bows, and Boomerangs are also found randomly throughout the world, making each playthrough slightly more unique than the last. Unlike most of Link’s adventures, they’re never needed for progression, used instead purely as sub-weapons or to solve optional puzzles hiding loot. Think of it a little like Ravio’s rental shop in A Link Between Worlds, only here you never know quite what you’re gonna get (or when). 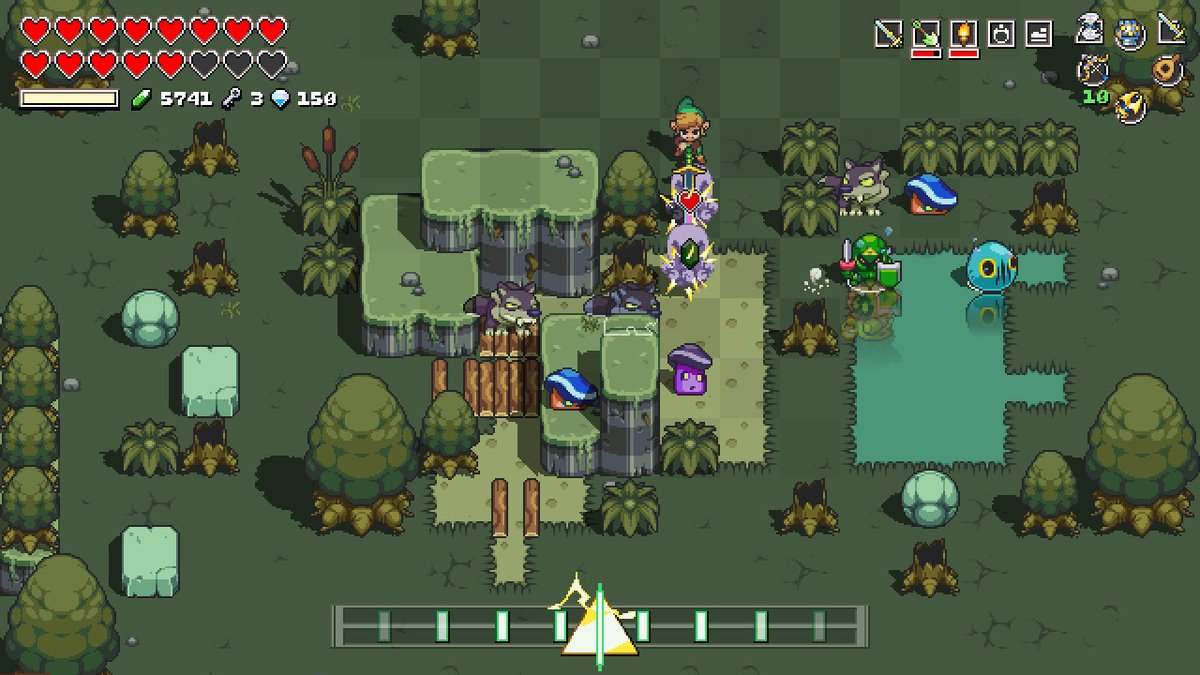 DANCING WITH THE D-PAD

Being a roguelike, few would fault you for assuming the game’s ill-designed for the faint of heart. You’ll be happy to learn Cadence of Hyrule is much more forgiving than its cryptic predecessor. For one, staple mechanics of the genre, like permadeath, are now completely optional. You can also tackle the entire campaign alongside another player because, you know, it’s dangerous to go alone. Still, the early hours of the game can provide difficult while you learn the ropes and gain your bearings, but once you’ve found a few Heart Pieces, Fairy Fountains, and bottled potions staying alive becomes much more manageable.

Should Dampé dig you an early grave, you’re simply forced to drop minor items (rings, boots, torches, and shovels) and any Rupees you may be hoarding. Thankfully, all these trinkets can easily be obtained again, with any important items like weapons, power-ups, and bottles remaining in your inventory. As a bonus, clearing an area of all its enemies will net you Diamonds — a currency used to both imbue weapons with special abilities at Fairy Fountains and replenish lost stock in a special shop upon death. That’s all to say dying isn’t really a big deal, but just know it does comes with the territory of the genre. 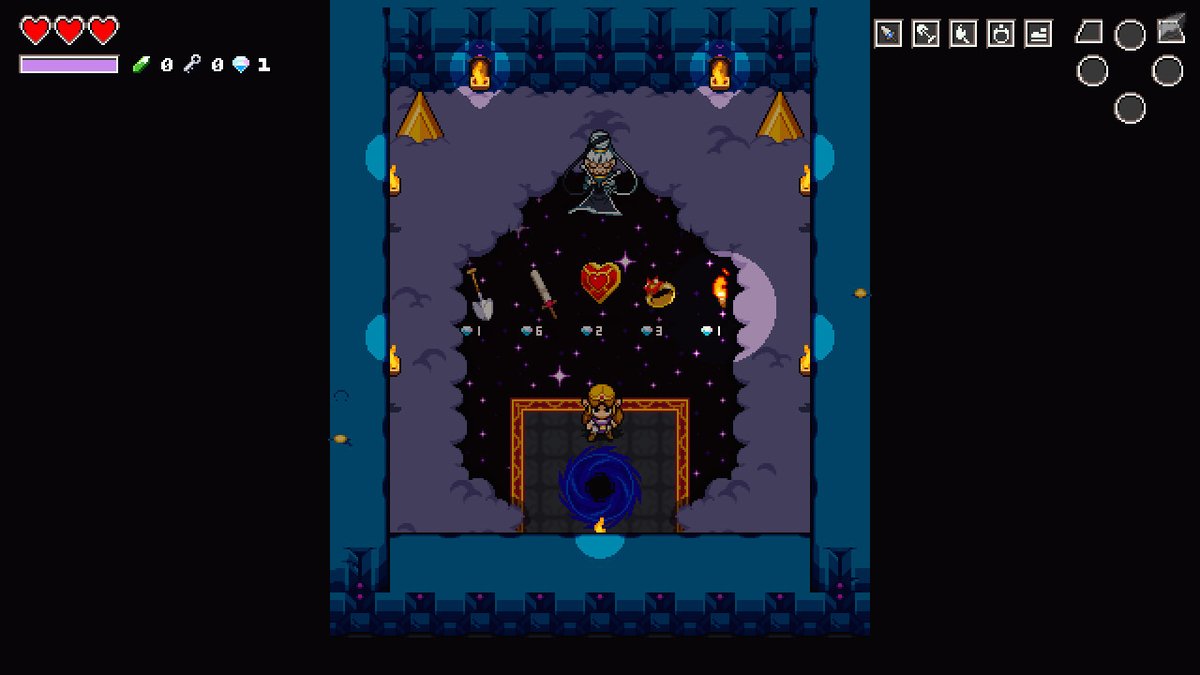 A lot of love went into adapting Crypt’s many minions into the monsters of Hyrule — all of which are actually quite clever! Slimes, skeletons, ghosts, and bats have been appropriately reskinned to Chuchus, Stalfos, Poes, and Keese — all while retaining their respective behavioral patterns. It’s impressive just how much enemy variety is crammed into this gem of a game — from common lackeys Lizalfos, Leevers, and Lynels to more obscure goons like ReDead or Gidhbo. Whether they move erratically, zigzag diagonally, or only on every other beat, each one presents a mini puzzle that’s fun to solve. Though, if you get a variety of ‘em piled together in close quarters — well, let’s just say even the Song of Time couldn’t save ya.

That creativity in enemy design extends to the bosses as well. Many classic big bads throughout the Zelda universe are given melodic makeovers, along with delightfully punny nicknames befitting their rockin’ new getup. Gleeokenspiel and Gohmaracas are by far my favorite of the bunch — the former sporting metallic keys as its scales while the latter gleefully rattles in the air like it just don’t care.

Their newfound acoustics are more than just pretty pixels, too, accompanied thematically by a bevy of beats implementing their instrument of choice. Listening carefully provides audio cues for some of their stronger attacks, like when Gleeokenspiel is charging up its lightning breath or Gohmaracas gets its booty shakin’ for some web slingin’. All that’s to say each battle is cleverly crafted to match the music, resulting in some of the most memorable boss fights you won’t soon forget. 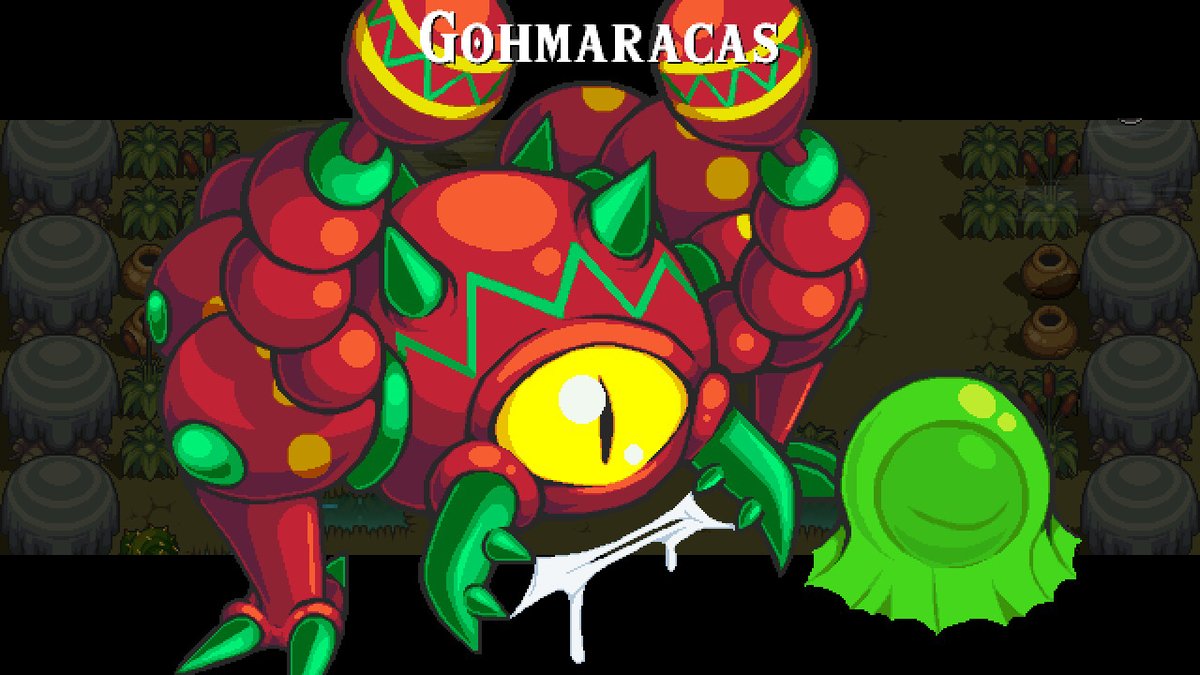 Unlike Link when he’s down to his last heart, there’s no need to beat around the bush: Cadence of Hyrule is phenomenally scored. The passion poured into each track, from the mesmerizing medley of overworld music spanning 30+ years of the franchise to something as simple as the nostalgic jingle when opening a chest, is inspiring to say the least. Composer Danny Baranowsky truly outdid himself with this one, creating what could be considered his greatest musical achievement to date.

Most of the soundtrack takes influence from A Link to the Past’s treasure trove of tunes, though there’s plenty to love for heroes of all eras of Hyrule. The Gerudo Valley combat mix in particular really slaps, and I could listen to the lofi beats of both Kakariko Village and the Ocarina of Time theme looped for days. There are even a few callbacks to classic Crypt songs sprinkled about for fans with a sharp ear. Bottom line, the soundtrack alone makes Cadence worth a pickup, especially for longtime fans of the franchise.

HALF MEASURES AND MODES

Dig the music, but can’t quite grasp the controls? If you’re feeling rhythmically challenged, there’s an option to toggle on “Fixed-Beat Mode” — which removes the need to groove to the music. While I wouldn’t recommend playing the entire game this way, it provides a great opportunity to learn enemy attack patterns and ease yourself into more accurately boppin’ to the beat.

On the complete other end of the spectrum, those who wish to get all masochistic with the melody can play in double-time. To call the mode challenging would be an understatement, on par with something along the lines of professional speed chess where players have fractions of a second to anticipate and react to an opponent’s moves. At the very least, it’s sure to be popular with the speedrunning community and worth trying should you truly wish to put your mettle to the test. 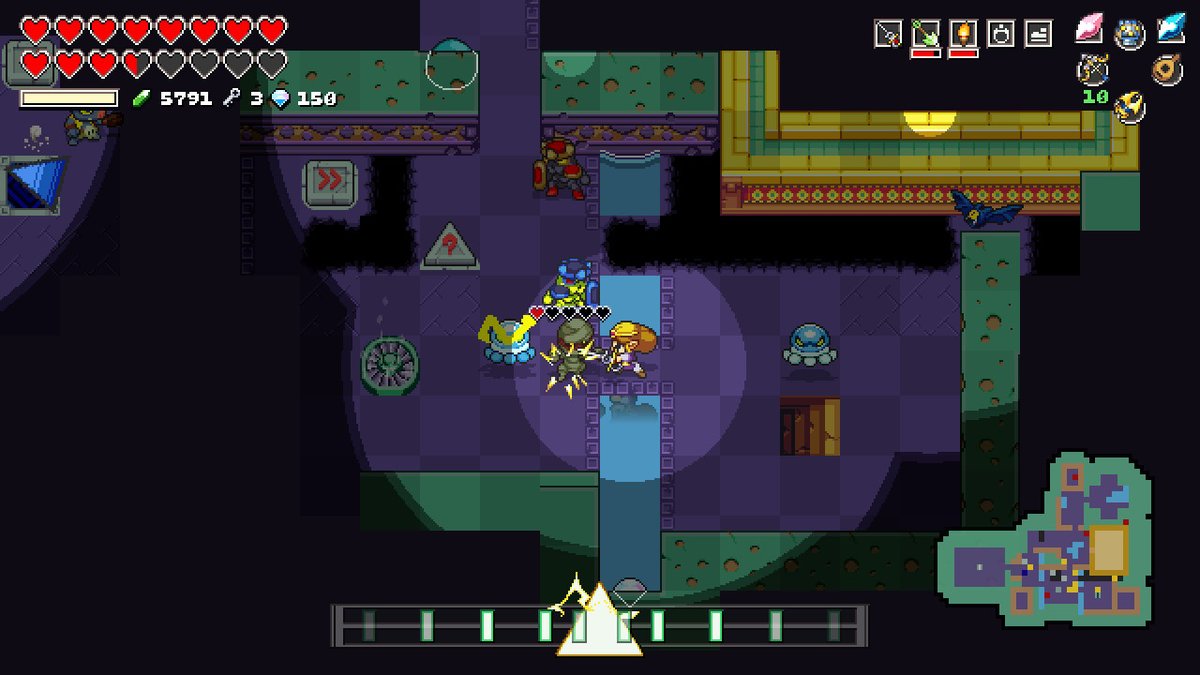 Speaking of speedruns, that’s pretty much the bulk of bonus content left after you’ve liberated Hyrule from every last Heart Piece. Daily challenge runs can be attempted once per day, which give players worldwide the same map layout, items and character. Custom runs, on the other hand, can be played infinitely and let you pick your own parameters, from your choice of Hylian hero and beat speed to dealing with the agony of permadeath.

That’s about it! It really is just about the rush of the run. Granted there’s a secret unlockable character that provides a unique (and very difficult) way to play, though I still found myself wishing there were more options. Imagine a mode that removed the overworld and compiled all the dungeons back-to-back, mimicking a more classic Crypt experience? Or how about one that lets you play as Tingle, asking you to be a pacifist and slip by enemies without killing them? Even more easily implemented options like a practice mode or all characters run would do wonders in bulking up replayability. Again, it’s nothing egregious, but noticeable given the original Crypt’s abundance of content. 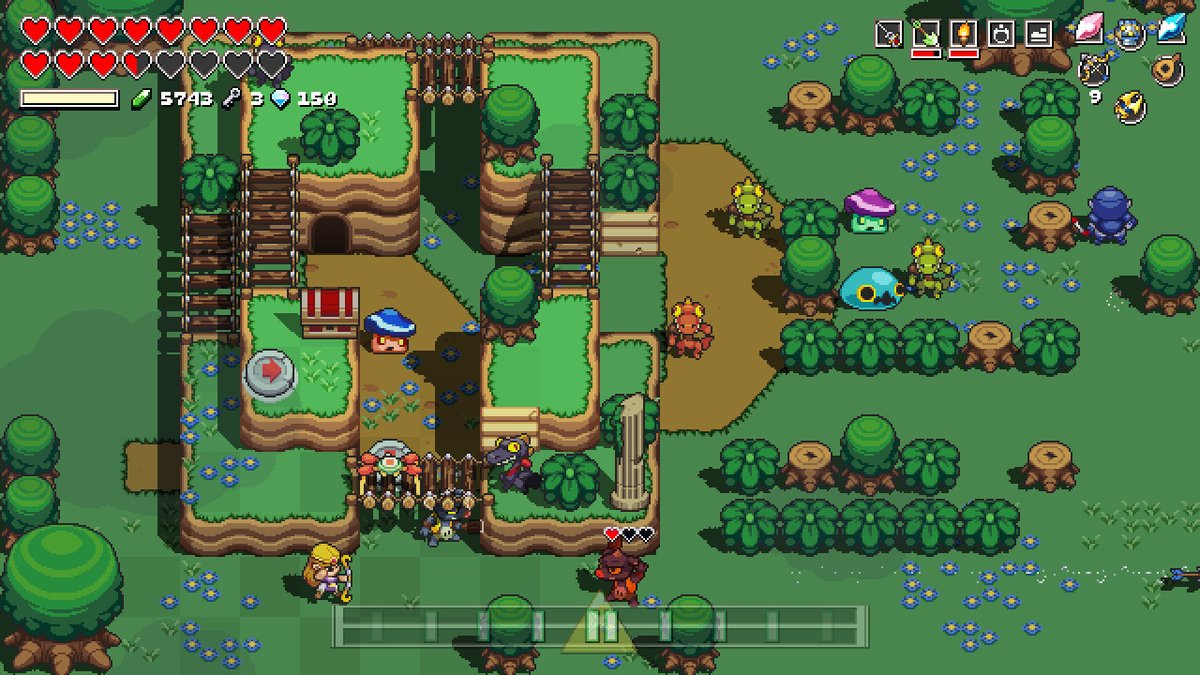 In a (Deku) nutshell, Cadence of Hyrule is a melodic masterpiece from intro to outro, proving the perfect encore to Crypt of the Necrodancer’s seductive symphony. It’s everything a Zelda spinoff demands: wisdom in design, courage in concept, and power in music — culminating in the one of the most epic video game crossovers this side of Hyrule. 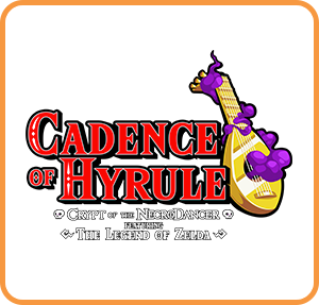