It’s been eight years since Mega Man’s graced us with his presence. Fans have since looked longingly toward the indie space to fill that Buster shaped hole in our hearts. While some failed to reach our Mighty expectations, others proved gallant feats of shovelry well worth unearthing. Yet still the question lingered, “Just when the heck in the year 20XX is my man Mega going to make a comeback?”

Fortunately for you, dear reader, that year has come to pass, as Capcom finally saw fit to end our suffering and give us the fix for super fighting robot action we’ve all been craving. Or has it?

Mega Man’s eleventh go ‘round the block is a bit like catching up with an old friend: He’s older and wiser, sure, yet still the same pellet-popping powerhouse you remember and love from when you were kids. That’s not necessarily a bad thing, though I found myself wishing he had matured just a tad more, especially over the course of a decade. The result is a game that feels wonderfully nostalgic, but hardly innovative — a flash in the pan for what could have been a much more bold return. 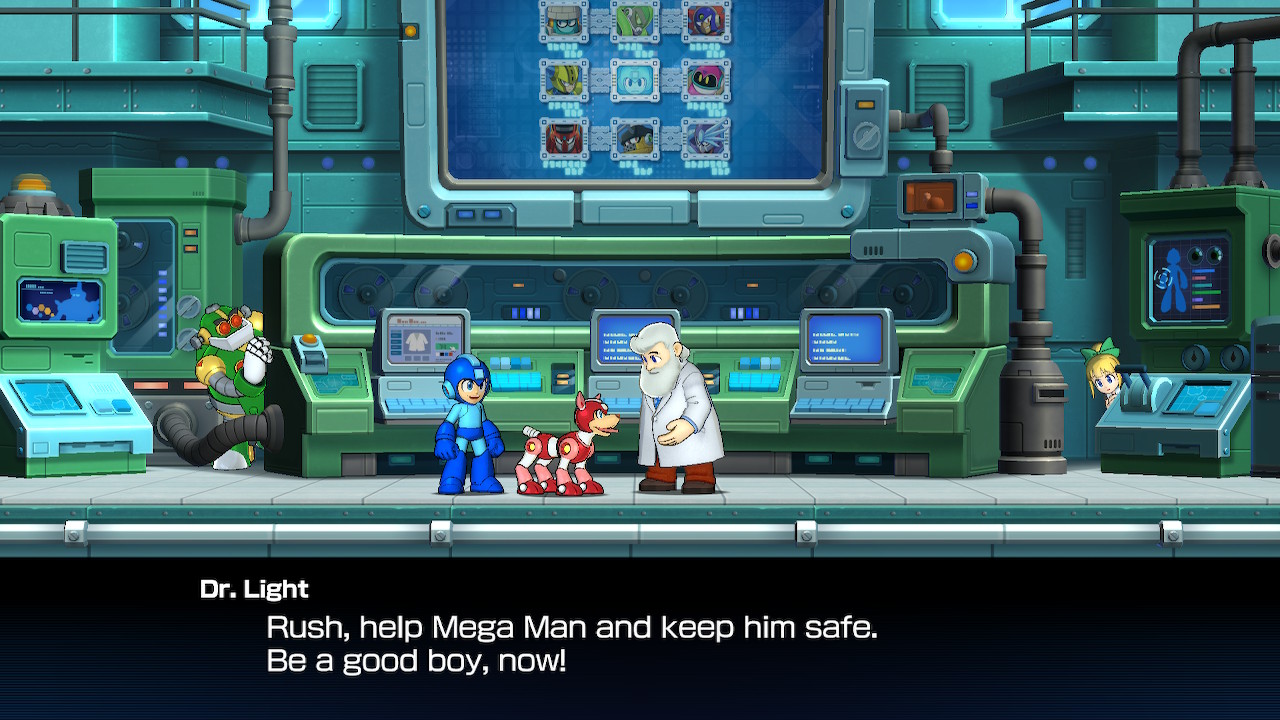 The year is 20XX. Mad scientist Dr. Wily is back with a vengeance and it’s up to everyone’s favorite boy in blue to once again bust him and eight robots gone rogue into submission. Surprise! Only this time the mustached maniac’s got a new trick up his sleeve, namely his (patent pending) Double Gear system — a dangerous device designed to push not only plot, but also a robot’s abilities well beyond their limits.

This marvel of modern technology is Eleven’s big new twist on the series’ familiar formula, giving Mega Man brief boosts in speed or fire power at the tap of a button. Whether the platforming’s too tricky or you just need a breather from a boss’ barrage of bullets, being able to slow down time or deal damage quickly can often mean the difference between life and death. Platforming purists will be happy to learn its use is completely optional too, outside grabbing the occasional out-of-reach E-Tank, Extra Life, or other coveted collectible.

Speaking of old school design, those trained in the ways of 8-bit busting will feel right at home adapting to Mega Man 11’s circuitry. The controls are responsive and physics faithful to platformers past, right down to series staple slide mechanics and knockback effects. Charge shots return as well, making quick work of any mechanical monstrosities Wily throws your way.

The most badass of the bunch being this generation’s new slew of renegade Robot Masters. Each one comes with Wily’s double gear system installed, resulting in fast-paced, multi-phased fights atypical of previous series entries. Blasting Block Man only to eventually have him hulk out into a towering tour de force, or whittling away at Acid Man’s shield while avoiding a flurry of corrosive tidal waves are just a few examples of the craziness you’ll encounter.

These fights are easily the most exciting part of the game, and discovering each boss’ weakness for the first time took me back to more youthful years penning progress to paper in my parents’ basement. The powers themselves range from arctic cyclones and ricocheting spread shots to a barrage of blocks raining high from the sky — each one fun to use even beyond their respective boss matchups. Bonus points for also being a fashion statement that alters not only the color, but appearance of Mega’s helmet and Buster. 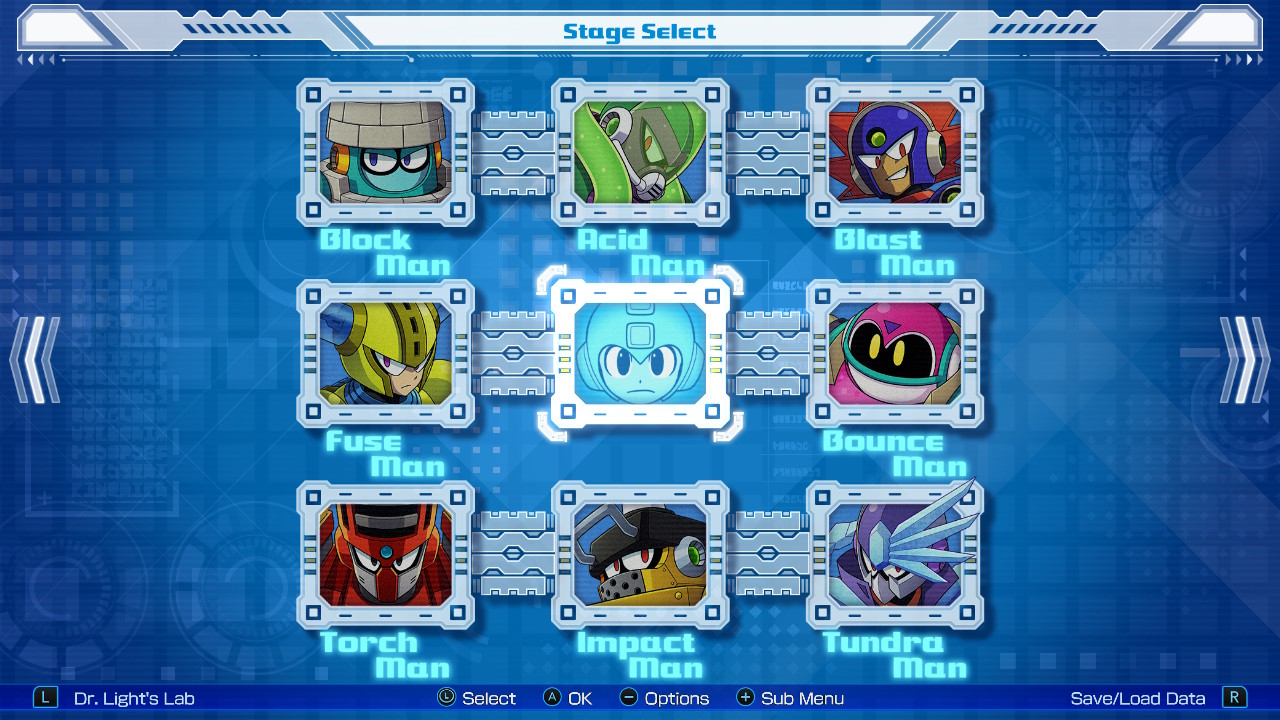 Unfortunately, the level design doesn’t quite live up to the Blue Bomber’s legacy. While appropriately themed to Robot Masters in both aesthetic and unique platforming mechanics, stages have a tendency to recycle content around the halfway mark. Escaping Torch Man’s screen scrolling inferno, pinballing around Bounce Man’s funhouse from hell, or skating through Tundra Man’s slippery snowstorm make for thrilling moments and surprising set pieces… the first time around. It’s typically once you’ve gotten around to beating mini bosses that déjà vu sets in, almost like the first set of rooms were copy and pasted with slightly tweaked hazards and enemy spawns to differentiate the two. Heck, even mini bosses reappear multiple times in a single stage!

To be fair, it’s a common problem found in most of Mega Man’s history, though felt particularly egregious here given the series’ almost decade-long hiatus. This extends well beyond just level design, too, and more directed towards Mega Man 11 as a whole. Yes, its great Charge Shots can be set to automatic or Rush button mapped to specific triggers. Minor tweaks like these are welcome additions to the franchise and oftentimes difficult to believe we ever lived without. 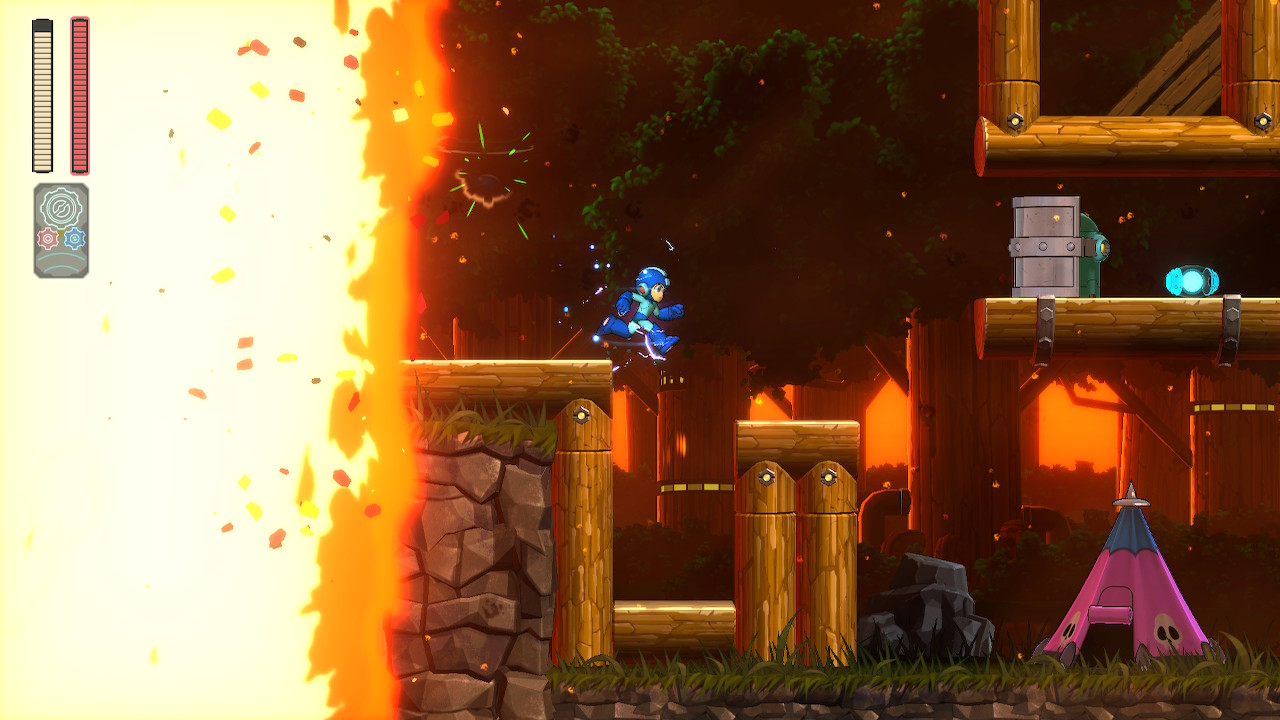 Though with Eleven’s development Capcom seems to forget we live in a post-Shovel Knight world, one where indies have been carrying the Blue Bomber’s torch for years and working tirelessly to evolve the genre in new and innovative ways. As it stands now, Capcom took the safe route, which is a shame given they practically pioneered some of the best platformers I’ve ever had the pleasure of playing.

FROM PIXELS TO PELLETS

Without a doubt, Mega Man 11’s fanciest new feature is its colorful coat of paint. Our robo rebel is still just as blue as ever, only now he’s parted ways with pixels in favor of more modern flair. It’s a bold and refreshing new look for the series, and one that will undoubtedly take veterans some time to warm up to. Personally, I’m glad Capcom chose to shake things up, though would have preferred a more flat, hand-drawn style similar to the Shantae series than the 2.5D look implemented here. It’s weird to admit, but I’d also take Mega Man 8’s animated cutscenes, bad voice acting and all, over Eleven’s generically drawn, single frame story beats any day.

Chasers of the chiptune know they don’t call him Rock Man for nothing! Yet while the franchise is synonymous with some of the most memorable beats in gaming, the same sadly can’t be said for Eleven. The entire OST drops the blues scale for a more EDM vibe, resulting in generic sounding melodies that are indistinguishable from the last. With the sole exception of Fuse Man’s Stage and the Main Theme, I cannot for the life of me recall a single song’s chorus — that’s after having looped the soundtrack in its entirety for hours while writing this review. 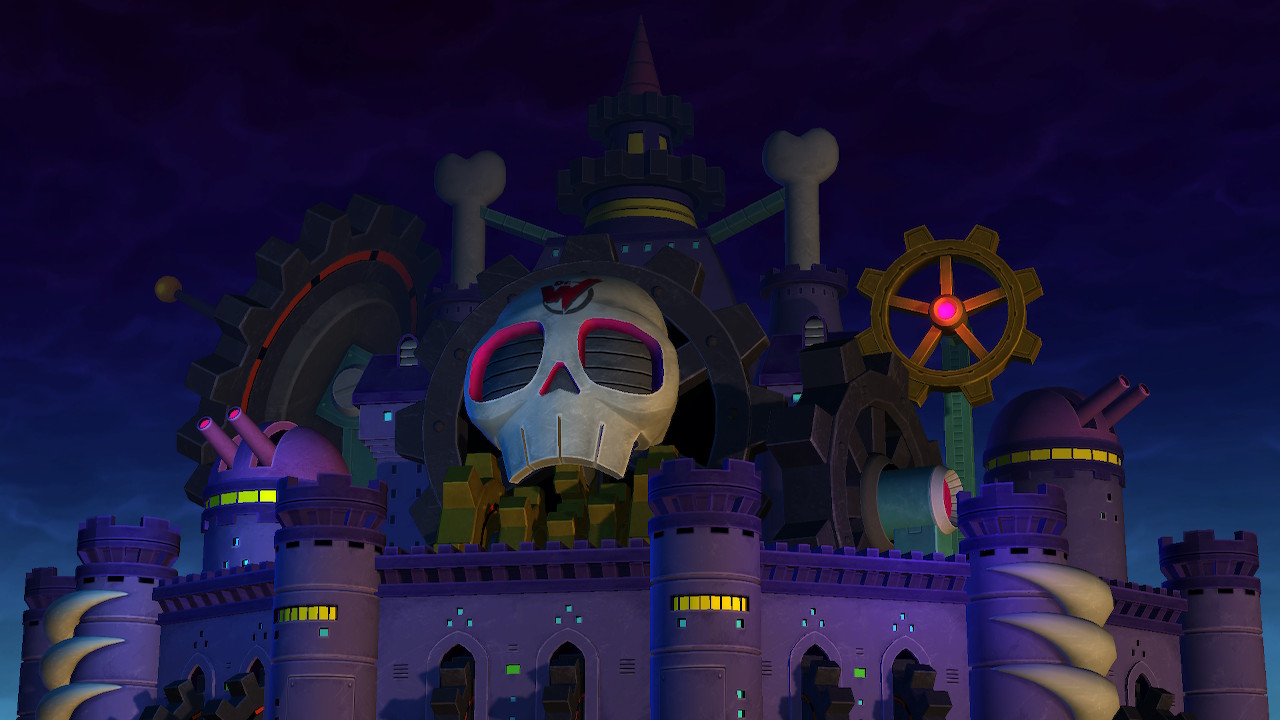 It was especially heart-wrenching to hear Wily’s Castle recycle the same track with relentless aplomb. Some of the series’ most iconic songs are usually found during the homestretch, making the absence of variety here particularly noticeable. Again, maybe games like Shovel Knight and its phenomenal score spoiled me, but it just feels like another instance where Capcom could have stepped up its game.

Taking a page out of Legacy Collection’s book, Mega Man 11’s bursting at the bolts with with extras, most notably a variety of timed challenges to complete. Beyond classic boss rush and time attacks for each and every stage are feats of strength only the most skilled of super fighting robots will endure — from beating levels in a limited number of jumps or shots to chaining together enemy kills. Best of all are online leaderboards for sharing each fanciful speedrun. Eat my dust (man), IGN’s Mitch Dyer! 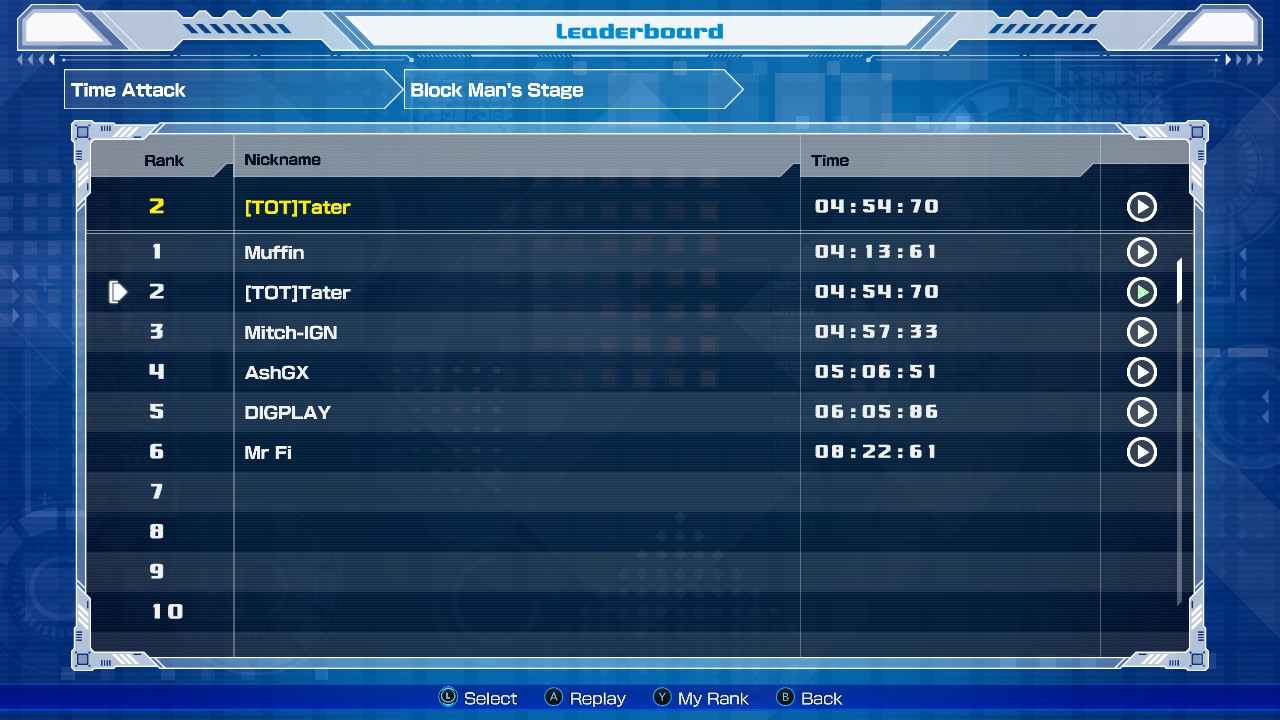 Both a gallery and achievement system round out the game’s special features. History buffs will definitely want to check out the former, which provides insight into Wily’s many mechanical minions, not to mention the lives of all eight stolen Robot Masters. Achievement hunters, on the other hand, will definitely want to beeline towards the Rewards section, where you can view every quest needed to snag that coveted 100% complete save file. Think you can beat the game on Normal or higher in just under an hour? By Dr. Light’s beard, godspeed!

(Oddly, there’s no jukebox for listening to the game’s soundtrack, though given its less than stellar reception maybe that’s not such a bad thing…) 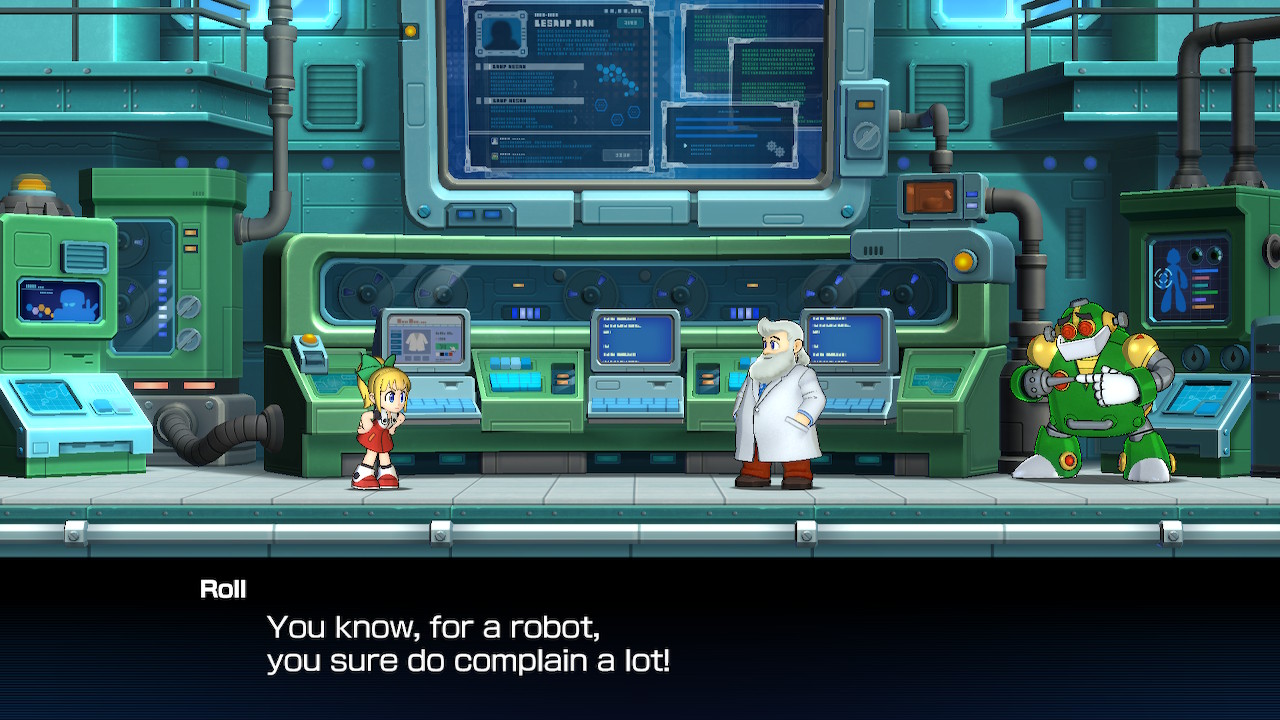 Beaming back after nearly a decade of hypersleep, Mega Man 11 continues the Blue Bomber’s legacy without skipping a beat. It doesn’t do anything particularly innovative with the series, instead recycling the nuts and bolts of its predecessors under a new coat of paint. Yet what it lacks in ambition is made up by tight platforming and riveting boss fights — a homage to its more pixelated past Mega fans are sure to enjoy.

Seriously, though. That soundtrack. Such disappoint. 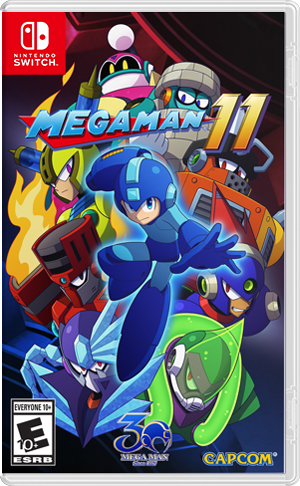