As Simon Belmont’s illegitimate son and lifelong protégé of Dr. Light, to say I’m a mega fan of the blue burrower would be a gross understatement. A love letter to many of the 8-bit classics near and dear to my heart, Shovel Knight proved a massive feat of gaming ingenuity when it first released back in 2014.

Sure enough, Specter of Torment proudly continues this tradition of timeless retro retreads in spectacularly grim fashion. An engaging story, incredible level design, and stunning soundtrack culminate into one of the best platformers to ever grace the mortal realm, let alone these early days of the Nintendo Switch. For those thinking of retiring their shovels for sickles, prepare for a slice of platforming heaven the likes of which you’ve never seen. This is the sorrowful tale of Specter Knight!

While platformers aren’t typically known for their harrowing themes and compelling narratives, Torment’s sense of storytelling proves nothing short of fantastic. A tragic prequel to the cobalt crusader’s hope-fueled quest, players don the tattered garbs of Specter Knight as he assembles the Order of No Quarter: the Enchantress’ newly recruited roundtable of ne’er-do-weller knights.

The word ‘tragic’ isn’t to be taken lightly, either. More than just a cool sounding subtitle, Specter’s torment is profoundly felt throughout his misadventures in corporate recruitment. Playable glimpses into the sorrowful specter’s past and scenes of brooding introspection while perched up top the wicked witch’s tower reap a dramatic tale of anguish and regret that’s leaps and bounds beyond Plague of Shadows’ more comical musings. This is a man haunted by the demons of his past, literally in search of one final shred of his humanity. In fear of entering spoiler territory, suffice it to say this is Yacht Club’s most dramatic adaptation to date and you won’t find it difficult to sympathize with Specter Knight’s eternal plight.

Of course, the writing itself is just as spectacular, ranging from humorous gags to heartfelt moments. I’ll refrain from delving into the latter, but just know the Order continues to ooze personality and charm, best witnessed again through their pre-battle banter. I found myself particularly fond of each Knight’s snarky, pun-filled remarks towards our anti-hero’s cadaverous appearance, not to mention Mole Knight’s fervent insistence on being the better burrower – lovable egomaniac that he is. (He’s clearly got self esteem issues.)

Engrossing story aside, what truly sets Specter of Torment apart from its predecessors is the uniquely tailored combat style of our scythe savvy anti-hero. In stark contrast to Plague Knight’s practically puzzle-like potion mechanics, Specter Knight favors technique through reflex driven, precision platforming. Wielding a sickle rather than spade, the floating phantom absolutely relishes in aerial combat. Beyond the basic controls for running and jumping, he’s magnetically drawn to enemies when striking while airborne, the momentum of which can propel him forward to new heights.

This simple mechanic, when used in tandem with an ability to run up walls NES Batman style, allows for some truly creative level design. It’s not uncommon to find yourself leaping on walls, ricocheting off foes, and slashing through obstacles in frantic fashion without ever planting your feet on the ground. It’s an extremely rewarding system oftentimes requiring fast fingers and twitchy timing, which may be difficult to grasp for newbies lacking a retro degree in NES-ology. Though anyone who does manage to master the choreography of this deadly dance will surely find one of the most gratifying platformers this side of the Mushroom Kingdom.

Fans disappointed by Plague of Shadows’ largely recycled level design will be happy to know Specter of Torment doesn’t fall into the same pitfalls. (He can fly, after all.) Each stage has been painstakingly reworked to complement the phantom reaper’s unique abilities and versatile movement style, featuring plenty of hidden collectibles to discover and brand new areas to sink your scythe into. The levels themselves are also beautifully balanced: just difficult enough to never feel actively discouraging. Boss battles are cut from a similar cloth, featuring entirely new twists to enemy attack patterns. Black Knight, for example, comes riding into the very first battle on a giant armored turtle, requiring players to rethink their tried-and-true strategies from prior adventures.

Thanks to a new hub world that takes great inspiration from a certain super fighting robot, players are free to tackle stages in any order they please. This gives rookie reapers the option to acclimate to Specter’s more floaty control scheme in easier stages, while connoisseurs of the cloth can immediately put their skills to the test in some of the game’s more tricky scenarios. It’s a return to form that fits well with Specter’s simplistic roots and streamlined focus on the platforming experience.

Bolstering the spectral spirit’s arsenal are a slew of Castlevania inspired sub-weapons ripe for the reaping. By collecting enough red skulls scattered throughout each stage, players can trade their hollowed husks for magical artifacts called Curios. Since variety is the spice of life (er… death?), weapons range from boomeranging sickles and shadowed doppelgängers to projectile deflecting barriers and self-healing skulls. Fueling these supernatural abilities is Specter Knight’s inner Darkness — cheeky nomenclature for your depletable magic meter. Health is also reclassified as your Will to push on: another welcome touch that falls in line with the sorrowful themes and general tone of Specter’s endless torment.

Exclusive to Nintendo platforms, speaking to new character Madame Meeber in the Enchantress’ fortress will let you scan your Shovel Knight amiibo and summon the Fairy of Shovelry. This miniature version of the azure adventurer adorably flits around your character, collecting treasure that’s just barely within your grasp. It’s charming, sure, but not terribly useful. It’s bare bones at best, and I personally wish Torment received something more custom tailored to its grim sensibilities.

Like both preceding campaigns, Specter of Torment boasts a New Game + mode after slashing through its roughly five hour campaign. Beyond expected features, such as harder hitting enemies and fewer checkpoints, Specter adds a unique touch (of death) for the truly masochistic among you. Slightly similar to how boost power works in the F-Zero series, both your Will and Darkness become one shared meter that slowly drains with time. Not only does this morbid mechanic force speedier playthroughs, but also means the use of Curios comes at a price: the sacrifice of health. As someone who revels at the opportunity for unique challenges, it’s a welcome addition to an already robust package that’s sure to give speedrunners and thrill seekers alike a run for their money.

I’d be committing an act of shovel injustice if I didn’t mention chiptune champion Jake Kaufman and his masterfully composed soundtrack. Every bit as astounding as the original, familiar anthems are re-envisioned to perfectly complement Torment’s gameplay tweaks and macabre atmosphere. Dethroning King Knight’s majestic melodies as one of my all time favorite tracks in the series is the double-time, Baroque-inspired stylings echoed throughout the Lich Yard. Personally speaking, all of Specter’s serenades outshine their sources of inspiration: a true testament to Kaufman’s passion for the medium and immense growth as an artist.

Specter of Torment is much more than just another labor of love from the passionate team of retro enthusiasts helming Yacht Club Games. Built from the ground up and sharpened to perfection, Specter’s plight is a beautiful marriage of old school charm meets modern flair that digs deep into Shovel Knight’s foundation. The masterful sense of storytelling and incredibly fluid platforming elements culminate in the saga’s finest offering to date, setting a new bar for the genre I’m skeptical even the pompous King Knight himself could succeed. Whether purchased independently or together in Treasure Trove’s bundle, the harrowing tale of Specter Knight absolutely deserves a plot in your digital Switch libraries. 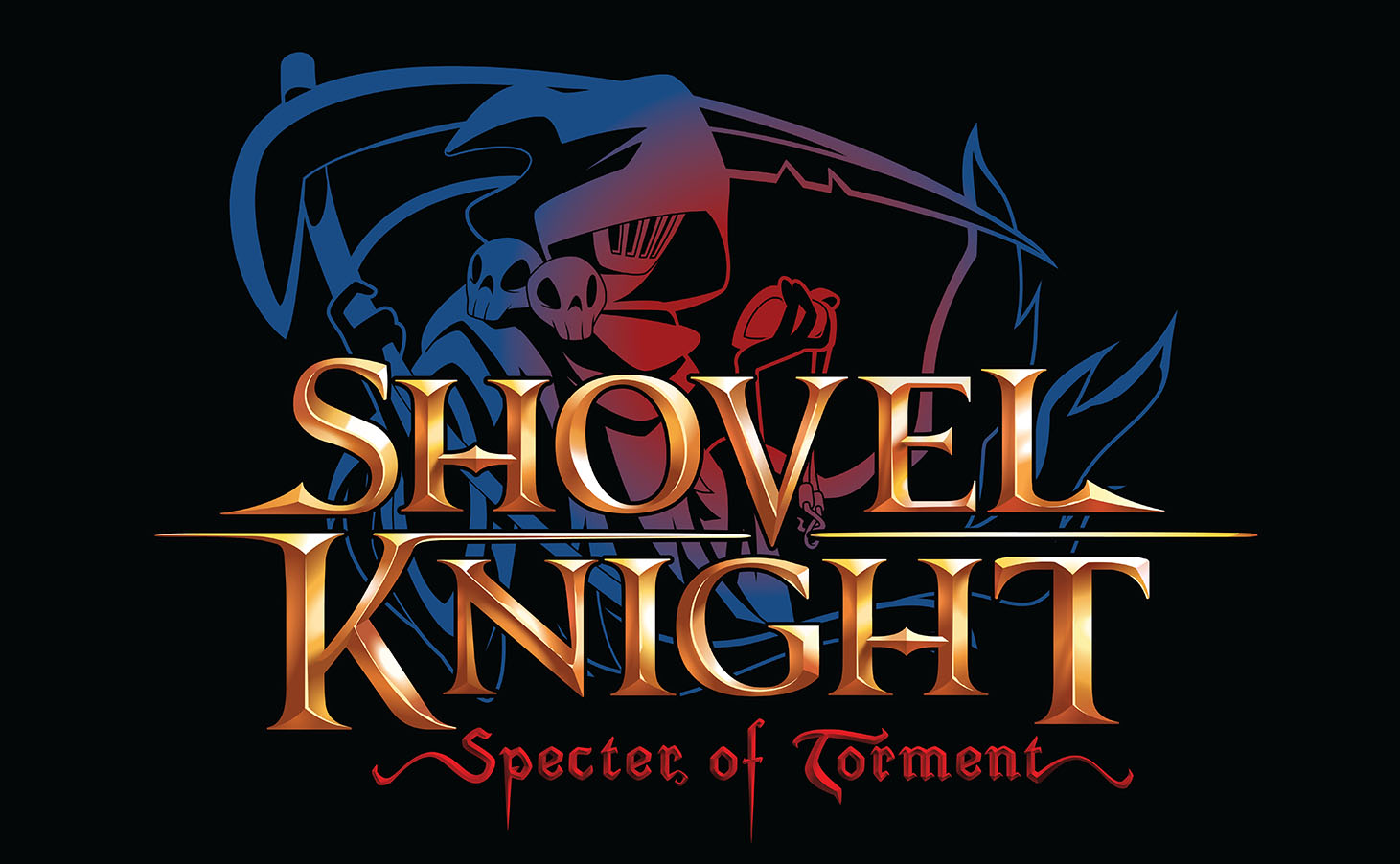