Born with a can-do attitude and the patience of a saint, I’ve always had a strong penchant for playing challenging video games. It all traces back to those early childhood days mastering the 8-bit adventures of Mega Man in my parents’ basement. As fans of the series well know, defeating Dr. Wily and his assortment of robot masters was no easy feat, especially during a time when save states didn’t exist. Since then, I’ve braved through the soul crushing abyss that is Dark Souls, the maniacally devious dark worlds of Super Meat Boy, and the relentlessly unforgiving second quest of Super Ghouls ‘n Ghosts.

Nothing, however, could prepare me for the infuriatingly difficult challenge that is playing Mega Man’s spiritual successor, Mighty No. 9. Not the fun type of challenge where every loss is a learning experience. No, I’m talking about the rage inducing kind triggered by reluctantly trudging through a broken game that ends in crying oneself to sleep and stalking eBay listings for replacement controllers. There’s no sugar coating it: Mighty No. 9 is a lifeless, unpolished and unattractive mess that doesn’t begin to do Mega Man’s iconic legacy justice.

Beck to the future

You play as Beck, one of nine Mighty androids created by robotics genius Dr. White to duke it out gladiator-style in the Battle Colosseum for the sole purpose of entertainment. Sometime in the year 20XX, an act of cyber terrorism causes machines all around the world to become crazed and rampant, not to mention our once Mighty allies. It falls on Beck’s shoulders to beat the eight rogue robots back into submission and discover the villainous mastermind threatening the fate of the planet. So far, a fairly typical and easily digestible setup befitting the platforming genre and the blue bomber himself.

However, while most players would have been content with the plot being delegated to a small paragraph hidden deep in the annals of the game’s manual, Comcept instead decided to supplement gameplay with an ongoing cohesive narrative – which in all honesty would have been fine, had the end result been anything more than a smattering of poorly animated cutscenes, unbearably exposition-heavy dialogue, and horrendously tacky voice acting that makes Mega Man 8’s Dr. Wahwee performance Oscar-worthy by comparison. (Pro tip: Be sure change the voice track to the marginally better Japanese version to avoid physical injuries caused by intense eye rolling.) Seriously, it was hard to believe at times that this was a finished product and not some early build knee-deep in development.

None of this is made any better by the game’s art direction, which is unapologetically ugly and unattractive: a massive understatement considering how well its source material manages to hold up, despite having been built on a toaster by today’s hardware standards. The 2.5D polygonal art style is nothing short of bland, barren and devoid of any sense of character. Backgrounds lack any meaningful detail to make them pop and look less generic, character models look stiff, and visual effects are in serious need of refinement (smoke particles and explosions being the biggest eyesores). It’s somewhat ironic that the game’s concept art is so stunningly gorgeous, leaving one to wonder why the decision wasn’t made to follow a more traditional 2D aesthetic in the first place. Just one look at the box art the game came in serves a constant, infuriating reminder of what could have been.

One of the biggest disappointments for me personally would be the repetitive, uninspired soundtrack. All the stage music simply blends together and isn’t nearly as memorable as anything found in Mega Man’s adrenaline fueled beats. I wouldn’t go so far as to call it terrible, but the mere fact I can’t recall a single tune off the top of my head doesn’t bode well in its favor. I wasn’t even able to recognize the boss theme music upon looking it up for this review: a track I must have listened to over a dozen times during my five hours spent playing the game. With games like Shovel Knight breaking new ground and setting the standard for retro-inspired ear candy, it’s very difficult to forgive Mighty No. 9 for its musical shortcomings.

Unfortunately, these imperfections are not solely delegated to the game’s presentation. Despite gameplay mechanics being so prominently reminiscent of both classic Mega Man and the subsequent X series, Mighty No. 9 never quite manages to live up to their iconic standards. While there are occasional morsels of ingenuity sprinkled throughout, the limited use of special boss weapons, insistence on destabilizing enemies, sloppy controls and poorly designed levels sully what could have otherwise been an enjoyable platforming romp.

As one would expect, players are free to tackle stages in any order they please. Beck starts out equipped with his standard three pellet attack, though his arsenal can be greatly expanded upon by defeating and absorbing the powers of Mighty Numbers at the end of each level. Each Mighty Number is extremely vulnerable to one of these special weapons, and the level select screen is kind enough to prompt players of each one’s specific weakness. Fortunately boss battles are exciting and varied, and I probably had the most fun memorizing their patterns and figuring out the most efficient way to take them out. Once cured of the virus corrupting their circuits, allied Mighty Numbers make brief cameo appearances in stages whose bosses they pair with best, aiding in battle by eliminating enemies and dangerous hazards at various scripted points. Surprisingly, I found this worked really well, providing a welcome and much appreciated tweak to the usual Mega Man formula.

The special weapons themselves, however, don’t serve much function outside of boss battles, and even then are sometimes easier to take down using Beck’s default state of being. Mighty No. 1 and Mighty No. 7 in particular have a tendency to wreck Beck in close quarters combat: a problem, considering the abilities used against them are melee-based with limited to no range. Their functionality in the stages themselves is perhaps the most disappointing though, at best utilized to access alternate routes that do nothing more than bypass a small portion of obstacles (with the exception of the Mighty No. 2’s cryosphere, which I’ll get to in a moment). Unlike Dr. Wily’s many fortresses, I was particularly peeved that the final stage barely even tried to use Beck’s robust toolset for light puzzle solving and progressions during the final push to Mighty No. 9’s big bad. This would all be well and good if their main purpose – providing options for defeating enemies – was properly balanced, but thanks to the newly introduced dash mechanic, this rarely, if ever, comes to fruition.

Mighty No. 9 plays slightly different from everyone’s favorite super fighting robot. A twist on the classic formula, shooting enemies enough times causes them to destabilize, allowing Beck to air dash through their weakened state, absorbing their “Xel” energy in the process. Chaining together these “aXelerate” kills quickly racks up a combo meter that provides a small boost to Beck’s health, damage, speed and attack. It’s a fun idea that’s deeply cemented into every strand of Mighty No. 9’s DNA, meant to encourage swift reflex driven platforming and addictive high score chasing. In reality though, stringing together combos proves quite difficult, as you only have a split second between depleting an enemy’s life force and zipping through their mechanical husk of a body before the streak is considered broken. More often than not, getting the timing just right requires players to be dangerously up close and personal with foes, risking unnecessary damage and disrupting Beck’s forward momentum.

If you happen to have the Cryosphere from Mighty No. 2 handy, freezing enemies extends the combo timer for an ungodly length of time. While it may sound helpful on paper, it effectively renders the use of other weapons obsolete, and I personally felt it undermined the entire purpose of the combo system’s existence. By using it, I never felt like I was improving my skills or learning how to play the game as it was intended, which completely negated any sense of accomplishment that comes with mastering the system’s intricacies and nuances. At the same time, not using the Cryosphere is a disheartening experience that makes stringing together long combos exponentially more difficult. The disparity between these two extremes ensures that the dash mechanic never feels necessary from a gameplay standpoint, despite being the intended focal point. In this way it feels shoddily concocted – tacked on as a desperate attempt to help differentiate Mighty No. 9 from the Mega Man series in any way it can muster.

Simply put, Beck lacks the tight control scheme needed to successfully pull off the game’s many obstacles and platforming challenges. Death rarely feels earned, more often than not the result of sluggish movement, miscalculated air dashes and imprecise enemy hitboxes. Fortunately on Wii U, each death comes coupled with a roughly 12 second load screen, giving frustrated players ample time to pull their GamePads back out of the wall and contemplate why anymore time should be wasted playing through this discouragingly sloppy mess of an adventure.

Many of these deaths are made worse thanks in large part to the game’s abysmally poor level design. Instant-kill environmental hazards are peppered throughout each and every stage, and in some cases not always prominently displayed on screen or made apparent. Liberal use of pink energy fields, crumbling towers and hulking baddies are just a few of these one-hit wonders begging to kick you back to distant checkpoints, and are almost solely relied on to artificially make stages more difficult than they actually are. This is only made more frustrating given the game’s emphasis on speed and racking up combos in quick succession. It’s a contradictory design choice that unnecessarily punishes players for playing by the rules instead of rewarding them for flawlessly honing their skills. When not trying to diligently chip away at your extra lives, stages mostly comprise of thoughtlessly cobbled together concepts sapped directly from Mega Man’s vast collection of titles, adding absolutely nothing new or substantial to the gameplay experience.

Beck to the drawing board

Mighty No. 9 is chock-full of empty promises and missed potential. On the surface, it seems to capture the spirit of classic Mega Man games pretty well, though scratch at it just a tiny bit and you’ll start to see its many cracks and imperfections hidden below. In its attempt to both adopt and evolve the tried-and-true formula and mechanics of one of gamings most iconic mascots, it somehow forgets to build a quality game to support it. Bland art direction, poor level design and sluggish controls plague what could have been a worthy successor to Mega Man’s everlasting legacy.

Leave a Comment
Buy at Amazon Buy at GameStop
4.5 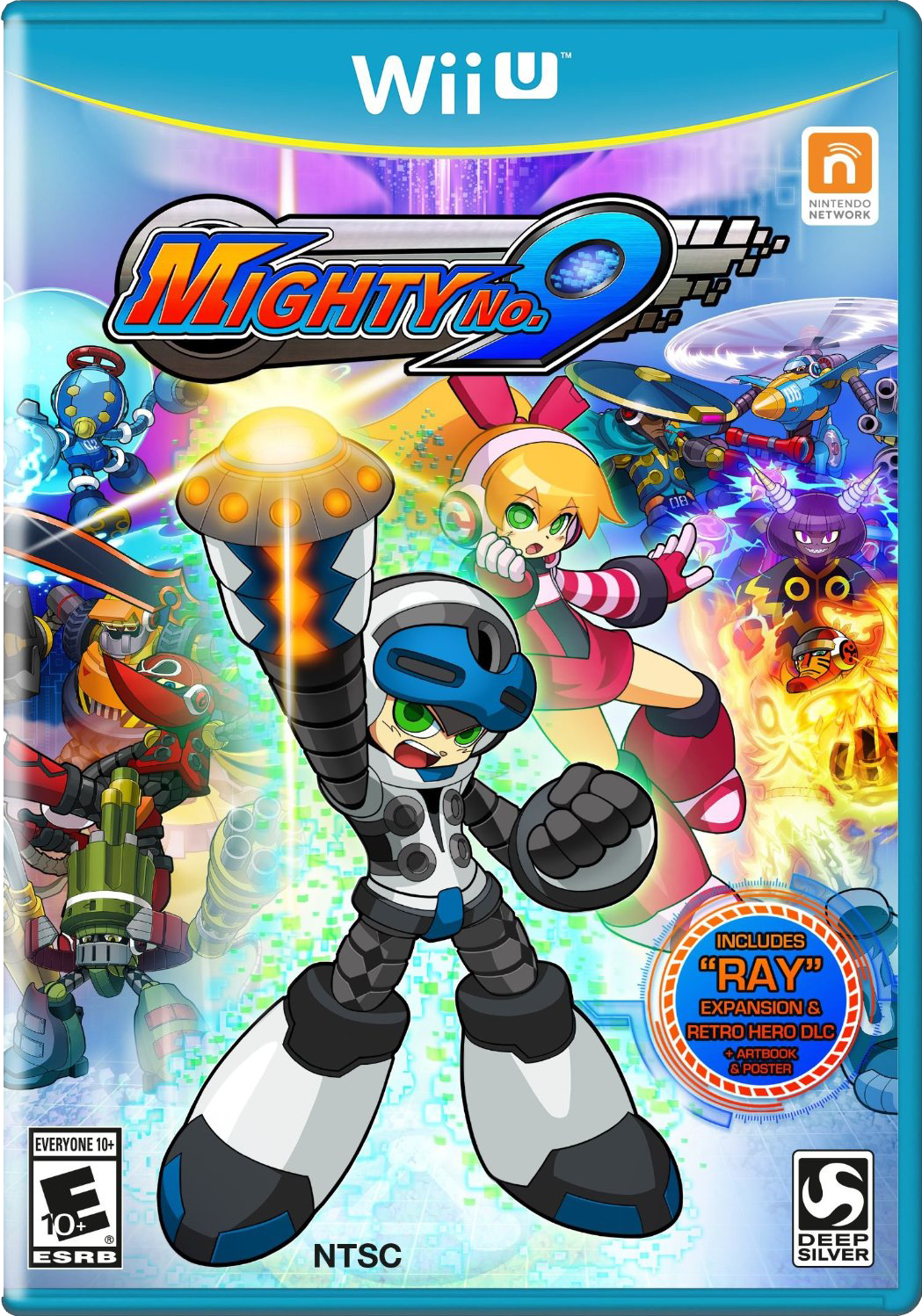