Full disclosure: I fell head over heels in love for the plucky platformer Celeste earlier this year. In fact, we here at Nintendo Wire gave it a perfect 10, praising its strong sense of storytelling and firm grasp of platformers past. So imagine my elation when approached to cobble together some thoughts on one of developer Matt Makes Games’ older works, namely the multiplayer phenomenon known as TowerFall.

While I’ve never typically been drawn to arena based fighters before, I was initially captivated by the game’s charming aesthetic and brisk controls, even spotting a few parallels between Madeline’s own adventure. What I didn’t expect was just how balls to the wall fun it would be, assuming you can rope a couple willing warriors into the fray.

So strap on your tassels and tighten those bowstrings as I walk you through how TowerFall’s addictive couch multiplayer mayhem hits the bullseye. 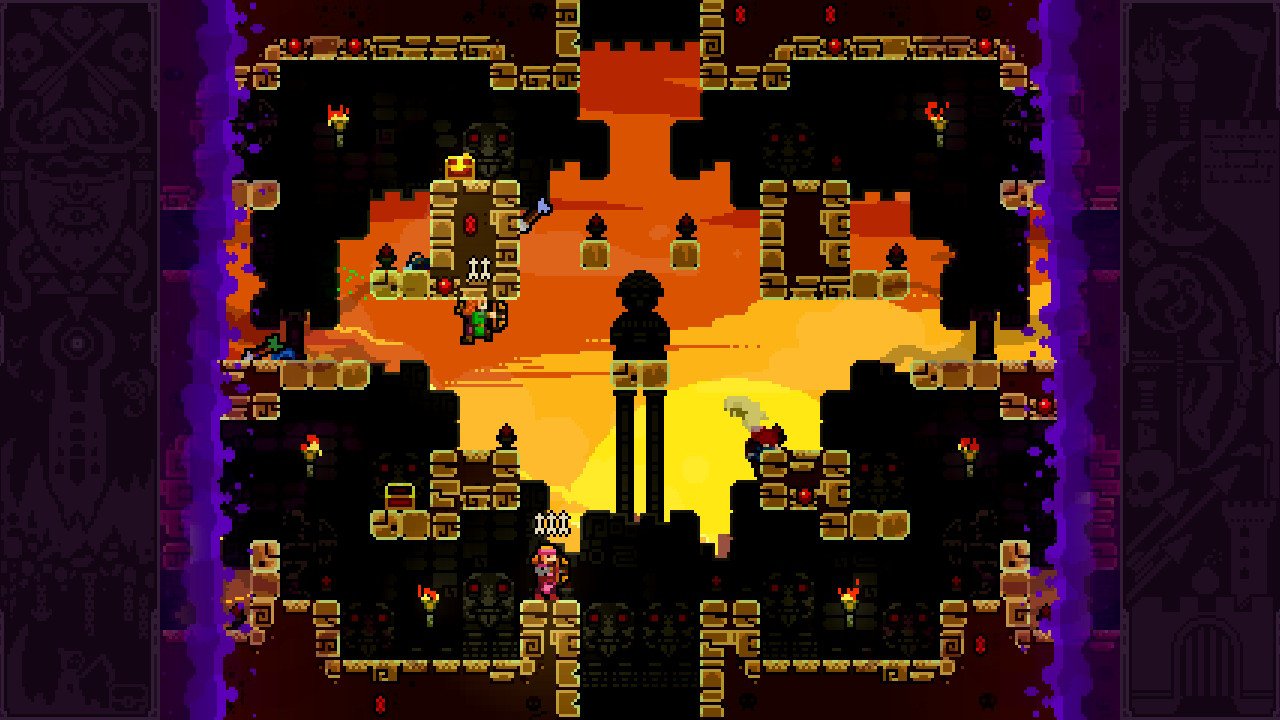 For those not in the know (and typically avoid taking arrows to the knee), TowerFall is a fast and furious multiplayer based arena game that’s been pushing friendships to their limits since 2013. Bow in hand, up to four players drape on the cloaks of archers out for each other’s blood. The kicker? Arrow stock is limited, meaning you’ll have to collect any and all misfires should your aim prove untrue — assuming others don’t stick it to ya first, of course.

Fortunately, as anyone who’s ever passed through the Mushroom Kingdom knows, there’s more than one way to gut a Goomba. When the chips are down and your quiver’s low, sometimes a good, old-fashioned headstomp’s just what the doctor ordered. Archers also come equipped with a dash mechanic for dodging incoming projectiles. When perfectly timed, skillful players can even yank arrows midair and place ‘em straight in their pockets! Knowing how to capitalize on these risk-reward opportunities forms the crux of TowerFall’s seductively simple gameplay loop, especially when challenging your more competitive friends.

Beyond these innate abilities are dozens of power-ups to keep brawls equal parts fresh and frenzied. Everything from shields for taking extra hits and wings for endless jumps to arrows coated with explosives has the potential to turn the tide of battle in your favor. My favorite is the Prism Arrow, which when caught by an opposing player traps them in a suspended animation for a brief period of time. Granted, they can still strike back, but it’s a hilarious sight to behold. 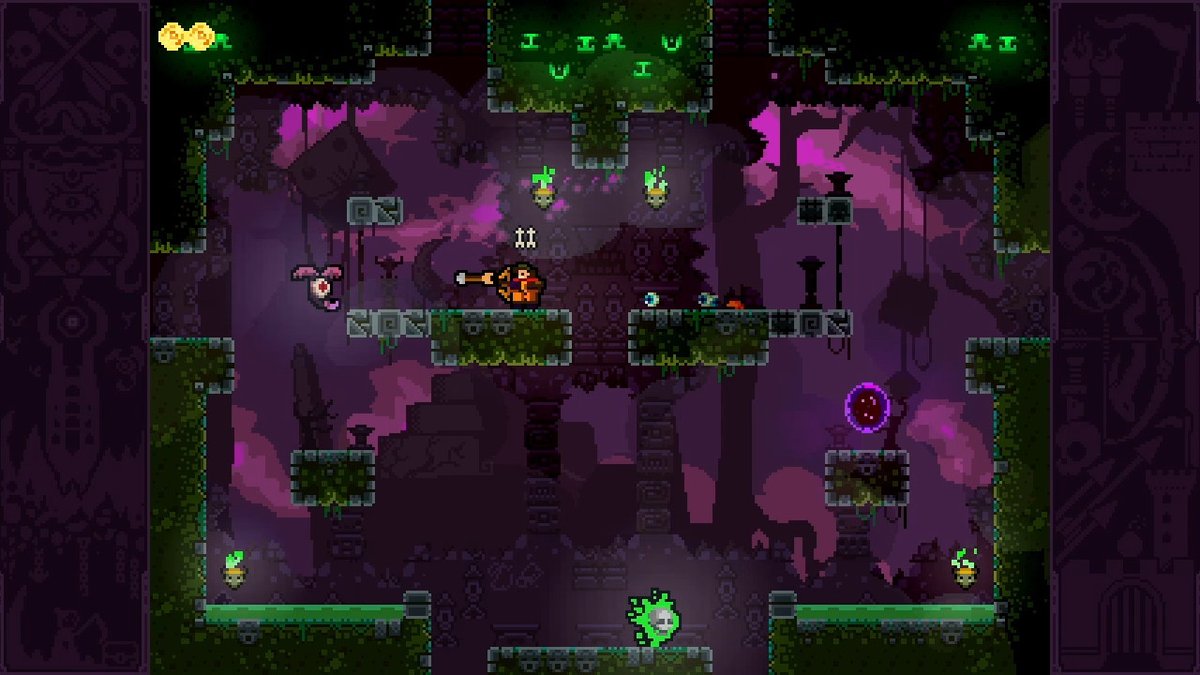 Prefer gallantry over gimmicks? With the power of customization players are given full freedom to adjust the variables of any match to their liking. Weapons, stage hazards, handicaps, buffs — each element of gameplay can be toggled on or off at will. Want to remove arrows completely in favor of a butt-stomping romp while walls of lava slowly engulf the stage? Feel the burn. What about reducing stock to a single arrow while turning everyone invisible? May your arrow fly straight and your aim be true. The number of possible combinations easily ranges in the hundreds, which should keep you and your friends sniping each other and shouting for a rematch long into the night.

And shout you shall, as the majority of your time spent TowerFallin’ will be piercing and punching friends from across room — quite literally, matter of fact. That’s because there’s no online multiplayer to speak of, its chaotic combat instead confined to the couch. Admittedly, it’s not the news most were hoping for, especially given the Switch version’s “definitive” feel. Though as someone who’s most treasured gaming memories involve three friends, a Mana tree, and a Multitap, it’s easier to both understand and accept why TowerFall remains so adamant in its offline convictions.

My main gripe lies with the fact Versus can’t be battled solo alongside computer controlled bots. Locking TowerFall’s most exciting mode behind a friend wall is beyond baffling, especially considering AI Archers do occasionally pop in as enemies in the game’s cooperative modes. Other indie party games, like Crawl or SpiritSphere DX, prove there’s still plenty of fun to be had pummeling CPUs into submission, if nothing more for practice before the real deal with friends. Why it’s missing here is beyond me — a significant blemish on an otherwise superb package. 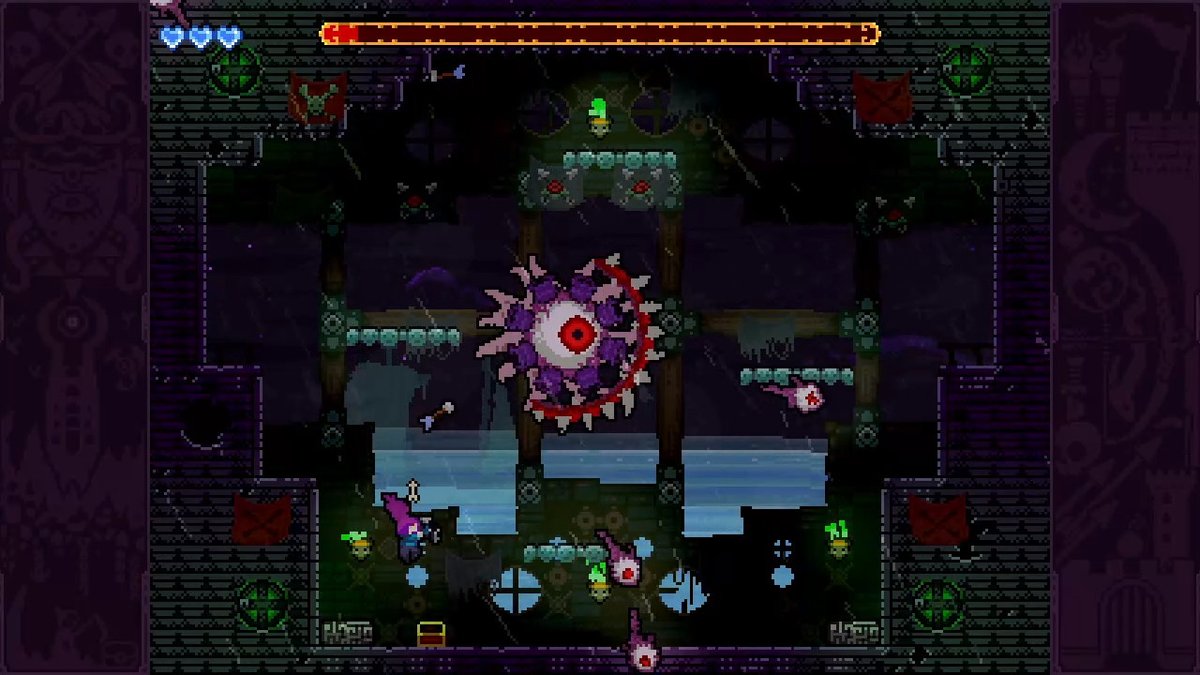 Thankfully, the portability offered by the Nintendo Switch helps compensate for the lack of online play and Versus mode mishaps. TowerFall’s simple controls and quick-fire pacing work well for encouraging random chance encounters, propelling itself to the top of my go-to games for showcasing the Switch out in the real world. I personally had a blast skewering strangers between drinks and roping bystanders into just “one more round” at my local watering hole. All in the name of writing a more thorough and honest review, I assure you.

A MOUNTAIN OF MODES

That said, there’s plenty of other modes to enjoy if you’re the lone wolf type, courtesy of TowerFall’s two included expansion packs: Ascension and Dark World. Beyond the inclusion of new maps and archers comes a trio of challenges perfect for when you can’t form a fellowship. First up is Trials, a collection of pint-sized puzzle stages that tasks players with striking a set number of mannequins in just a few seconds. (Think “Break The Targets” in Super Smash Bros.). Mostly it serves as a great tutorial for learning the ropes and understanding certain power ups better, though also hides a hefty high score chase for those who seek it.

The other two modes, Quest and Dark World, prove much more enticing, transforming many of the game’s Versus stages into a hord-esque fight for survival. There isn’t too much of a difference between them, as both feature one or more players staving off waves of increasingly deadly enemies. Personally, Dark World gets bonus points for each of its gauntlets ending with boss fights. While there are only four of ‘em, each big bad’s a fearsome force to be reckoned with, increasing in difficulty and attack patterns the more buddies you have in tow.

Like many indie ports before it, TowerFall’s debut on Switch doesn’t come without a few extra perks and surprises. For those of you with a couple extra Joy-Cons handy, six player battles make their debut alongside new widescreen levels and additional gameplay variants. Also, fans of Matt Thorson’s mountain climbing masterpiece Celeste will be happy to learn Madeline and her more ruthless reflection Badeline join the fray. Like all archers her inclusion is purely aesthetic, but that didn’t stop me from tearing up when snippets of Lena Raine’s majestic OST triggered upon routing my rivals. Seriously, go play Celeste right now if you haven’t already. You’ll thank me later. 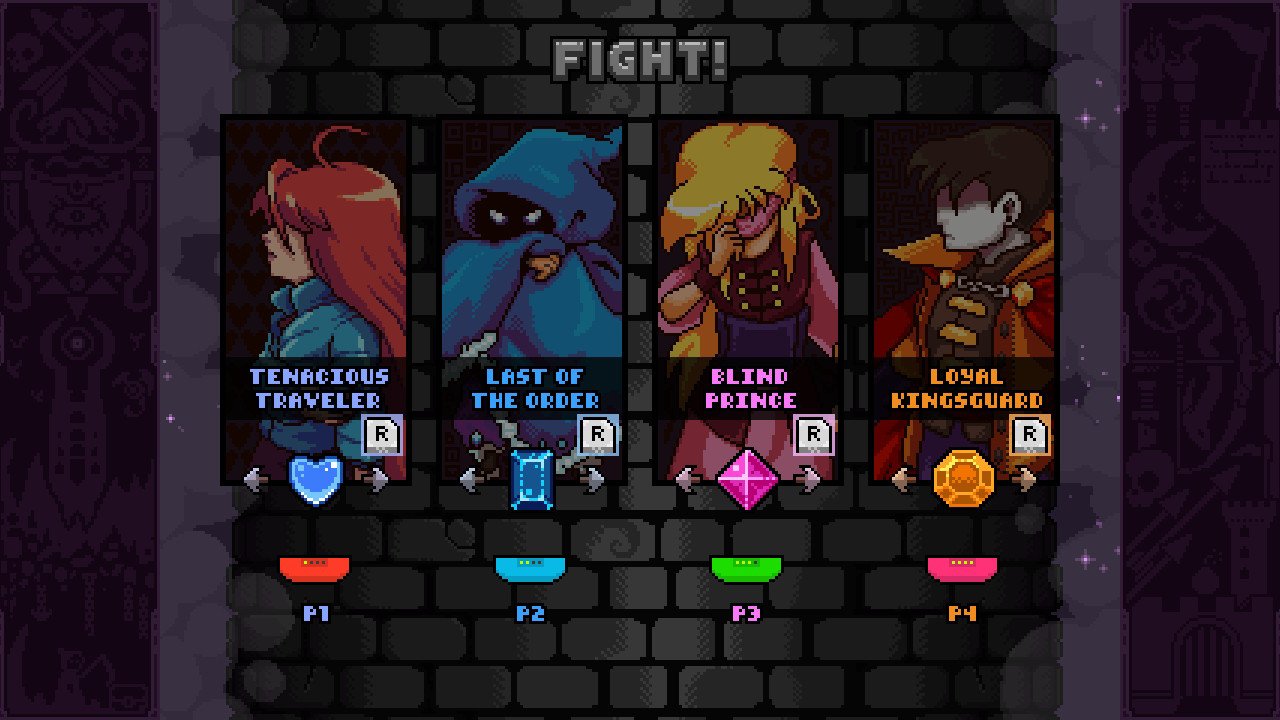 With grogs of mead in hand and a band of buddies by your side, TowerFall proves to be the pinnacle of arena based brawlers. The combat is simple, customization plentiful, and action frantic, giving Nintendo’s own flagship fighting franchise a run for its Rupees. Whether by comfort of couch or tables of tavern, TowerFall deserves to be played by gamers of all skillsets and sizes — for the good of the realm. 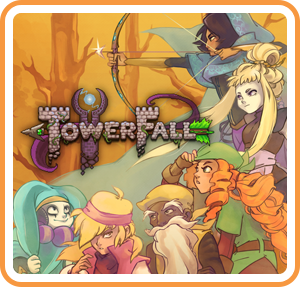