Platformers aren’t known for their riveting narratives. Push start, watch a brief introductory cinematic of nefarious ne’er-do-wells threatening the status quo, and it’s off to saving princesses, staking vampire lords and (Mega) busting up twirly mustached scientists. “Gameplay is king!” we shout, pledging our allegiance to the gods of gaming lest our beloved hop ‘n bops become corrupt by senseless exposition and poor pacing.

This mountain of misguided thinking has regrettably been shaping the platforming scene since the dawn of the arcade, and as such would take an incredible force to move. Fortunately, moving mountains is a certain red-haired heroine’s specialty, smashing the old gaming gospels into dust and ushering in a new age of platforming prosperity.

On the surface, the latest game by Towerfall creator Matt Thorson, Celeste, is a super hard 2D platformer cut from the same slab as Super Meat Boy. The controls are fluid, levels cleverly designed, and difficulty maddeningly satisfying. Though buried beneath its familiar exterior is a touching story about dealing with anxiety, depression, and a whole heap of real issues many of us often face in life, yet rarely talk about openly.

And guess what? It manages to tell its tale seamlessly in a way that actually enhances gameplay rather than hinder it — just one of many reasons Celeste warmed this curmudgeon’s heart and proved itself one of the best platformers I’ve had the pleasure of playing to date. 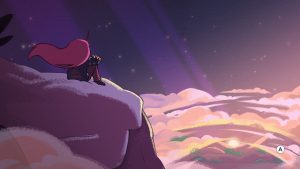 YOU SHOULD SEEK HELP, LADY

Players slip into the super-powered snow boots of Madeline — a troubled youth in desperate need of a hug — as she approaches the eponymous mountain’s base. Held prisoner by her emotions and seeking an escape from the pressures of modern life, our crimson climber sets her sights on the summit in hopes of feeling something, anything that can give her life meaning. Though this is no ordinary rock, making manifest all her deepest, darkest fears in the form of a demonic doppelgänger hell-bent on chipping away her self-esteem at every opportunity.

It’s a fairly straightforward and highly relatable tale of accepting who you are, warts and all, though what’s most intriguing is how its themes of self-worth and loneliness aren’t simply explained in dialogue, but also explored visually and through gameplay within the levels themselves — usually during story centered segments bookending each chapter. Fleeing fearfully from Madeline’s more loathsome self during one of the earlier levels, only to later stand her ground and accept those less desirable qualities as an important part of her being was a powerful punch in my heart hole I won’t soon be forgetting. These story moments never feel heavy handed or tacked on either, blending beautifully with the fast and furious platforming throughout your arduous ascent. 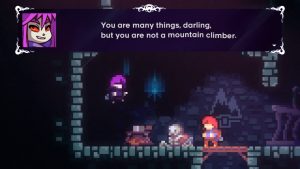 The pixel-powered art style is charming to say the least, bursting with colorful chasms and retro flair. The same can be said for Celeste’s handful of charismatic characters, from guffawing grannies and spirited hotel managers to a selfie snapping hitchhiker with a heart of gold. Dialogue is delivered alongside expressive character portraits and adorable gibberish speak, providing a surprising amount of inflection and personality to each friendly face. Little details — like shifts in Madeline’s hair color to denote whether her dash attack is ready, flowing waterfalls in the foreground, or twinkling stars lit up by an aurora swept sky — breathes life and polish into Madeline’s majestic world.

A crisp high five goes to Celeste’s memorable and moody music, written and performed by the amazingly talented Lena Raine. Each seductive track ties together beautifully with the action playing out on screen — from uplifting synths during those first few optimistic steps exploring an abandoned city to sombre piano strokes echoing in the background of reflective ruins. The grand finale is particularly praiseworthy: a musical medley of each chapter’s themes that slowly builds up to a crashing crescendo of ethereal bliss. Beat for beat, it’s one of the most impressive soundtracks to grace the airwaves and more than deserving of a top spot in your digital album collections. (Fingers crossed that a vinyl release is in the cards).

At the bleeding heart of Celeste’s charming presentation and compelling story lies one of the most satisfying expeditions in pixel-perfect platforming since Super Meat Boy clogged up its players’ arteries back in 2010. Not unlike the mountain’s many crevasses, control over Madeline is blissfully tight and easy to grasp, with mastery over her three basic maneuvers — jumping, dashing, and climbing — becoming second nature within moments of gripping the controller.

Most incredible, though, is the mileage gained from this simplistic moveset, courtesy of the mighty mountain’s expertly crafted courses. There’s little time to look before you leap on Mount Celeste, with each screen serving miniature puzzles to be solved that demand quick wits and fast fingers, lest you become skewered by spikes or tossed into the encroaching abyss below. Whether exploring forsaken cities, creeping around haunted hotels, or pushing through windswept valleys, each locale comes packing its own set of unique ideas and environmental hazards to master. Some of my favorites involve avoiding ghostly apparitions, bouncing off frozen fireballs, and dashing through blobs of celestial jelly.

Despair’s not only used as a narrative motif, mind you, instead brimming from every crack and crevice of Celeste’s perilous peak. Video game or not, scaling a mountain is no walk in the park, and you can expect the Grim Reaper to come a-knocking at least a few hundred times before reaching the top. Fortunately, death is earned rather than forced, and never at the mercy of factors beyond the player’s control. In fact, the frustration that comes with each misguided leap juxtaposes beautifully with Madeline’s own inner turmoil and feelings of inadequacy, which only served to better motivate and push me forward to die and try again until I was finally standing high among the snow-capped clouds.

Therein lies the beauty in Celeste’s phenomenal design; that eternal struggle to learn from past mistakes and push through insurmountable odds no matter how stacked the odds. Failure runs rampant throughout Celeste’s fissured veins, with each death-defying misstep igniting a beacon of hope for the next seemingly suicidal attempt.

While the beaten path will surely get you to the summit sooner, those who opt for the more scenic route will find the game’s chock-full of more hidden pathways and secret rooms than an 8-bit Metroidvania. You’ll spend most your time plucking floating strawberries from their nestled nooks and crannies: a fruitful endeavor for these craving some of Celeste’s more juicy platforming perils. Occasionally a false wall or two can lead to even greater treasures, not to mention a handful of easter eggs I won’t dream of spoiling here.

Budding backpackers might want to hold onto their receipts, as the most prized collectible of them all will have you second guessing your recent investment in midlife mountaineering. Each chapter has a hidden B-side cassette tape to unwind, the magnetic strips of which hold the most daunting challenges the mountain has to offer. These alternate stages call back a euphoric symphony of remixed obstacles and tunes from the main adventure that will leave you equal parts mesmerized and tearing your hair out with rage. Some require the use of advanced techniques not needed in the main campaign, like harnessing momentum in creative ways or boosting off walls to reach greater heights. Granted, they won’t appeal to everyone, but those with a more masochistic mindset like myself will surely appreciate these optional obstacle courses for the rewarding sense of accomplishment they provide. 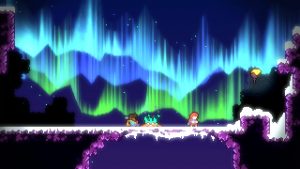 For those worried their platforming prowess isn’t up to snuff, Celeste does offer options for catering the level of challenge to a difficulty that’s much more accessible. At any point in your adventure, a robust Assist Mode can be accessed for toggling on various tweaks to gameplay — from adjusting the game’s speed, stamina, and dash attacks to making Madeline completely impervious to damage. Whether used when struggling through a single screen or zipping through the entire game unscathed is up to you, though I’d personally argue for using the feature as little as possible given the many thematic ties gameplay holds to Celeste’s story (at least for your first playthrough). 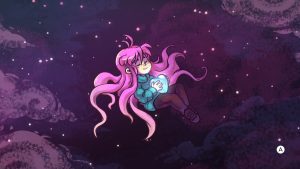 LEAVE ‘EM ON A CLIFFHANGER

Every time I put my Switch down and wait for my frostbitten fingers to thaw, I find myself seduced by Celeste’s siren call, itching for just one more run up its mystical mountain.

From start to summit, Celeste is a joyous journey brimming with heartfelt moments that will sink their heel hooks in you long after the closing credits roll. Strong storytelling and a firm grasp of platformers past slowly snowball into an emotional avalanche worth riding, cementing its place as one of the most compelling video games to ever grace the medium. 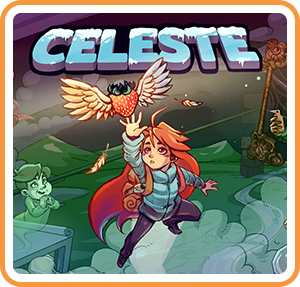