The old gaming gods are dead. Once worshipped in ancient arcade altars and offered countless quarters by a loyal congregation of followers, these dark deities preaching scriptures of local competitive play have long since been snuffed out by the celestial light of modern technology. Replaced by the almighty Internet and computed in the clouds, we rarely pay pittance to the rituals of gaming’s past as we blindly follow our online overlord deep into the ever encroaching abyss.

Yet buried in the dark beneath the smoldering ash of what once was lies a cursed crypt crawling with fetid beasts dripped in pixels and thirsting for a sacrifice of both friendship and humanity. Possessed by couch competitive spirits and bonded in an unholy sanctimony between roguelikes, bullet hells and brawlers, one game creeps forth from the primordial ooze to feed off the fringes of this new world order.

That game is none other than Crawl, and it’s frickin’ awesome. 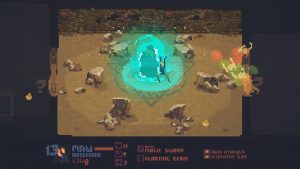 Stripped of its flesh and boiled down to the barest of bones, Crawl is an arcade inspired, multiplayer dungeon crawler where you and your friends take turns swapping between the hero and swarms of murderous monsters. Under narration of a curmudgeonly wizard spouting enough B-movie nonsense to script an entire feature franchise, each dungeon dive begins with four human players shanking each other Battle Royale style, the last of which left standing gets to wander its dangerous depths alone.

As the hero, you’ll slice ‘n dice through all manner of dungeon crawling mainstays. You explore rooms, dodge traps and loot chests, the spoils of which are used to purchase new weapons, items and spells forged by blacksmiths foolish enough to set up shop on each and every floor. Fell enough fiends and you might just level up enough to desecrate the dungeon’s altar, confront its big bad and barely escape with your life by the skin of your teeth. 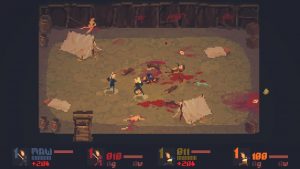 But what of the wretched souls betrayed and backstabbed during the onset of our hero’s quest? Left to rot and burdened with unfinished business, they now haunt hallowed halls as vengeful spirits, flinging furniture and triggering traps as any poltergeist worth its weight in ectoplasm should. Most importantly, they can possess pentagrams scribbled throughout the dungeon’s many bloodstained surfaces and reincarnate as a random monster to fulfill their evil bidding — from rabid rats and rotting ghouls to beaked abominations itching to peck your guts out. Kill the hero and you’ll be resurrected in their stead — but only if you’re fortunate enough to land the final blow.

This gameplay loop lies at the bleeding heart of Crawl’s special sauce, not to mention what kept me and my mates shoving shoulders, cursing each other’s names and knocking over drinks long through the night. What starts out a respectable display of camaraderie as monsties band together to strike down the hero quickly devolves into a self serving free-for-all to get that last rejuvenating hit, only to then repeat itself ad infinitum until a single victor stands proud atop a mountain of tattered skulls. In this way, the line between cooperative and competitive play are constantly being thrown into flux — something fans of Nintendo’s own friendship killing franchise, Mario Party, are all too familiar with. 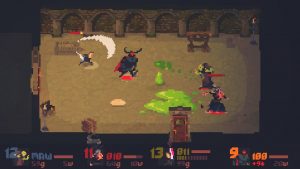 Speaking of friendship, and to keep those bonds relatively shackled in place, Crawl employs some creative checks and balances to ensure no single player can easily steamroll to victory off a strong start. Just like our hero, the dungeon’s many sigil summoned minions can also be leveled up, shapeshifting from the teensiest of terrors to full-blown, bellowing behemoths. Wrath — the ensuing hatred accrued towards the living that doubles as currency for evolving your hellspawns into horrors — is elegantly distributed based on the the XP levels of other players earned as heroes, meaning the spook resurrected the least simply gains access to the strongest monsters sooner. It’s a clever system that keeps the action fast and playing field fair, assuring even the most unforgiving of runs could still end in anybody’s favor.

It’s difficult not to hemorrhage endless pools of love and affection for Crawl’s breathtaking presentation. The crude pixel art style is ridiculously retro, endearingly modeled after arcade cabinet crawlers of yore — warts, software glitches and all. The aforementioned narrator, with his cackling monologues and twisted sense of humor, perfectly straddles the line between campy and tongue-in-cheek, never once failing to slice a smile on my face. It’s all drenched in a blood-curdling soundtrack of energetic chiptune blips and modern synths that perfectly harmonize with the macabre mood the game’s going for.

Of course, the real stars of the show are the some-sixty creative creepy crawlies to slip your specters into. From bomb-lobbing hobgoblins to sludge-spewing fishmen, each one is a grotesque cesspool of terror that’s both fun to play and more unique than the last. While some clearly overshadow others in the power department, mastering each malicious move-set is a cinch thanks to Crawl’s inclusion of a simple, two-button control scheme made easy for newcomers to wrap their tentacles around.

The last point is especially crucial considering without a tactical understanding of secondary abilities, most monsters are incapable of tangoing alone against even the most hopeless of heroes. Nay, fellow human hunters: I’m afraid it will take a combination of skill and careful coordination with your temporary teammates to craft that perfect gauntlet of gloom and doom. Fortunately for the former, a series of challenge rooms lets players practice as their favored fiends for as long as they like. 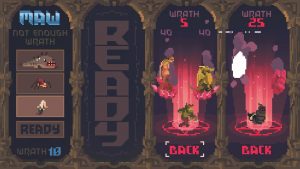 EVEN DEATH IS NO ESCAPE DOWN HERE

That’s not to say heroes are completely helpless. Despite the odds being stacked 3:1 against them, a veritable armory of medieval munitions and sorcery give their squishy meat sacks more than just a snowball’s chance of survival. The bludgeons of battle axes, while slow, pack enough raw power to wallop the beefiest of beasts, while swift striking scimitars make mincemeat out of monsters in the blink of an eye. Fancy yourself a colossal claymore imbued in flames, poison tipped crossbow or magic dagger that can summon a storm of blades from the sky? Crawl’s got you covered.

You’ll want to snag the best equipment possible, too, if you plan to escape each calamitous confrontation intact. Every floor comes packing a portal for conjuring one of Crawl’s brooding bosses, though you’ll have to slay your way to level ten heroics first to activate them. Piloted piecemeal by the souls of fallen friends, these malevolent Megazords serve the final bastion in the hero’s search for salvation. Extra unlocks and accolades await those whose blade strikes true and with little mercy. Slip up three times, however, and they’ll be stripped of their humanity, doomed to an eternity fraught with agony and despair as the Elder Gods rise to wreak havoc upon the world once more. 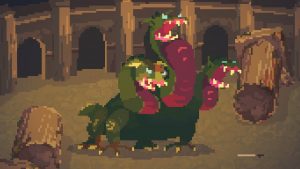 Playing Hot Potato with one’s humanity alone has its merits, but the real bloodbath begins when you can seduce up to three friends to join the occult. Thankfully, the Nintendo Switch is custom-tailored to the task, requiring as few as two pair of Joy-Cons to get this monster mash cooking. While the lack of online multiplayer will likely turn off a portion of the gaming community from giving it a chance, it’s an understandable sacrifice given the intended nod to nostalgic days past pumping loose change for the privilege of laying the beatdown in person. Crawl wants you to look your friends in the eye when you stake a knife through their hearts, and it’s all the better for it.

Of course, the game’s perfectly playable alone should you find you’ve already burned your buddies’ bridges during party games in the past. The A.I. is surprisingly competent at mimicking the ensuing multiplayer mayhem, with bots set on Hard proving particularly stimulating affairs. Challenge rooms, achievements and a treasure trove of grimoire entries to uncover provide more than enough incentive to keep players crawling solo for hours on end. At the very least, it’s perfect practice for when you inevitably start summoning friends over for sleepless nights spent endlessly stabbing each other in the dark. 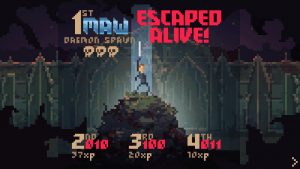 As foretold by the gospel of Ghidraak, Crawl is a cross-genre gem and welcome resurrection of arcade games of yore. Fraught with betrayal and murderous intent, its unique gameplay concept of possessing both man and monster couples beautifully with its retro stylings and cryptic soundtrack, serving up a sacrificial smorgasbord of multiplayer madness that will be passed down in scripture for eons.

What are you waiting for? Give in to the void, sign away your soul and get crawling with one of the most devilishly delightful party games to shamble onto Switch. 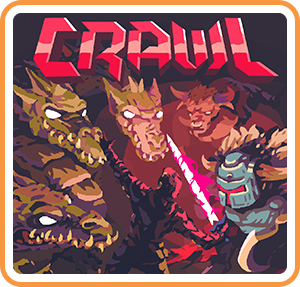