Five things that drew me into Mario + Rabbids Kingdom Battle

Consider me a convert with respect to Mario + Rabbids. I remember exactly where I was when the game was leaked and how little attention I gave it. Fast forward to E3 and I’m sitting in on Ubisoft’s press conference, Shigeru Miyamoto is on stage and I see the game in motion. When I managed to play it later that week I was surprised at just how much fun I ended up having, how I wanted to see more weapons and skills within this mashed up world. Now that I’ve put several hours into the game, I’ve come up with five things that really sold me on the experience and made this yet another crossover joy on the Switch.

I don’t know how many times I’ve traversed through the Mushroom Kingdom. Even with it changing from game to game, there are several design motifs and ideas that recur in the side-scrollers, and even some non-standard adventures. Mario + Rabbids twists the familiar into something more comedic, but I was surprised at just how many times I stopped to take it all in. Battles carry the game, but the scenery makes getting from fight to fight a joy in its own right. The Rabbid themed additions and changes shift from blending in and needing a good eye to spot to BWAH-ing in your face and relishing in their own absurdity. As you go through the game, all of it flows together to become a cohesive world worth wandering in.

When I say humor I’m not talking about the tone and mayhem the Rabbids bring by default. Rather, it’s the wit and fun that’s woven into the game’s writing. Your guide, Beep-O, has things to say the whole game through to make up for the rest of the cast’s more silent status. This extends to things like the character profiles and weapon descriptions as well. Not everything is perfect, but when my earliest expectations were fueled by what I knew about the Rabbids in passing, I became pleasantly surprised with how often I started laughing along with the game.

Going into the game, I knew I’d enjoy the battles, but being able to see more and more added to the formula over time made for a surprisingly tactical experience. I developed go-to strategies, switched around preferred characters and dreaded certain enemy types. Most of my strategy game experience has been with Fire Emblem, so to have something familiar in design but different in execution was exciting. Once you hit a stride and feel well equipped you, too, can be a Badass Princess just like Peach. 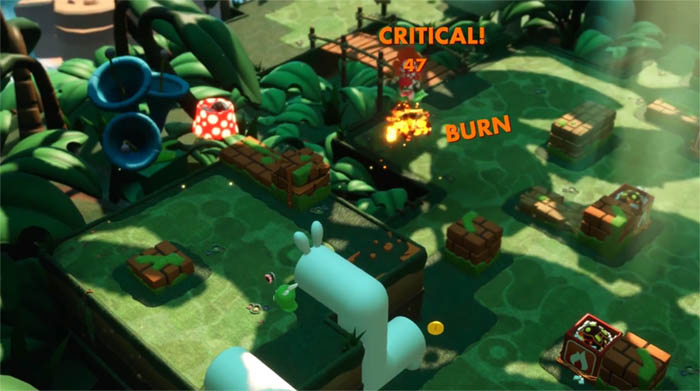 I’m ashamed to say I had, in time, forgotten just who was composing the score for this one. Chalk it up to how I felt about the game when it first came to light, but most details were going in one ear and out the other. Those same ears would be reunited with an old friend once the game got going though, as the unmistakable work of one Grant Kirkhope made its way out of my speakers. I’d played enough Banjo-Kazooie to be able to hum my way through every key tune on command and there’s a definitely familiar vibe in this game’s score. This is the toughest of these reasons to describe but maybe the one that spoke to me on the most personal of levels. Plus, I hear he’s a nice guy, too!

Mario! Seriously, while the Mushroom Kingdom theming is the ingredients and the Rabbids are what spice it up, Mario’s the one taste-testing this whole adventure right alongside you. He doesn’t speak, but seeing his reactions and how he handles this whole mess was a treat in itself. Being the standup hero he is, he makes friends easily, but it’s clear with how many times he facepalms that this isn’t exactly the best of times for him. Still, his heroics and inherent likability shine through in his poses, voice work and animations. Every new face — in the group and those against it — meant a few new interactions via cutscenes to sit back and enjoy before jumping in to duke it out in another battle.

Plenty more to see and say

This is just the beginning when it comes to my thoughts on Mario + Rabbids. Our full review will be coming closer to launch, but in the meantime you can check out a host of videos we’ve put out of the early stages of the game. Hopefully, you enjoy what you see as much as I did — and look forward to the game’s release this coming Tuesday.

Check out our Mario + Rabbids videos: