Here we are at last, to what I consider the pinnacle of the Kirby series, and my personal favorite.

Kirby Super Star saw the return of Masahiro Sakurai as director, and in the time between Kirby’s Adventure and this he managed to find a way to make a larger, more diverse game. Super Star wasn’t just a single game either, but eight distinct games of varying length and complexity that showed Kirby at his finest multiple times over. With the exception of a pair of sub-games amongst the collection, Kirby retained his standard array of default abilities, which just goes to show how well the hero’s simplified nature can lend itself to several modes. This flexibility of the character would go on to be a hallmark, shown in the frequent addition of extra modes in future games as well as his tendency to find his way into sub-games, ranging from falling block puzzles to a unique sort of golf to an entirely yarn-crafted adventure. 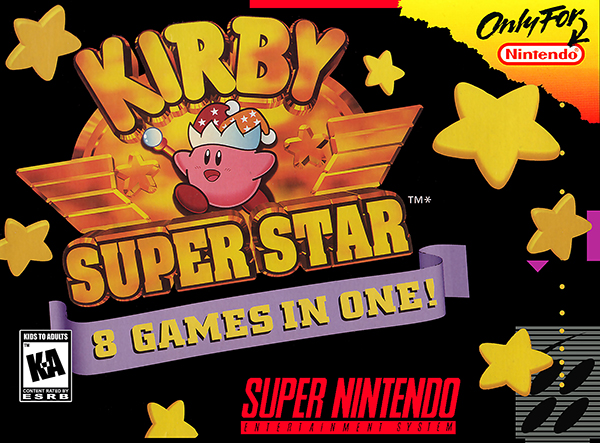 Though lets not get ahead of ourselves; Super Star deserves our full attention. Before delving into the individual entries of its gallery of games, the universal improvements at its core are more than worth a look.

Kirby’s Copy Ability received another universal upgrade in the form of hats. While functionally they did nothing, the hats became a recurring aesthetic choice – and an adorable one at that. Seeing Kirby don headgear befitting the techniques he’d absorbed is the definition of charming and allowed a great visual shorthand to know exactly what you were capable of doing without having to glance to the bottom of the screen. The magic number was 24 once again, though a few of the abilities from Adventure had rotated out for new ones. Among these were the high flying Wing, the highly skilled and strong Fighter, the mach-speed Jet, the tricky and versatile Ninja, the magical Mirror, and the oh-so-90’s Yo-yo. All of these are some of my absolute favorite abilities in the series, with Yo-yo standing out in particular. 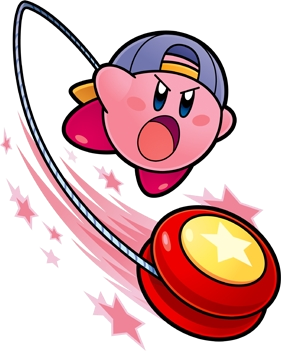 It wasn’t just the number of abilities that allowed for variance. Each of ability now had an assortment of attacks and techniques that allowed for multiple means of traversing stages and approaching enemies. This also allowed for a sense of personal achievement, sort of like learning a character in a fighting game but much more simplified. Alongside this was the addition of helpers. By discarding copy abilities Kirby could spawn allied versions of its representative enemy, like summoning Waddle Doo by sacrificing his own ability to fire beams. This also opened the series to multiplayer for the first time, allowing a friend to join you on your adventures and adding to the already impressive amount of content within the cartridge.

The game looked and sounded gorgeous as well. In the transition from NES to SNES, a more vibrant color palette was available along with larger, more detailed sprites. While Kirby games had always had noted differences in its worlds, each sub-game can easily be told apart by what’s on the screen, as well as the individual worlds and stages within each. The soundtrack is another highlight, with songs such as the downtempo groove of Mallow Castle, the jazzy Meta Knight’s Revenge, and the ever popular Clash! Gourmet Race! making their way to players’ ears for the first time.

As stated before, the eight sub-games within Kirby Super Star are a mixed pack in terms of length, but all share a level of memorability that make this the most fully featured game in the series, even if others would go on to showcase longer core adventures. First on the list is Spring Breeze, a remake of the original Kirby’s Dream Land, with a few alterations. While it condensed some of the stages and removed a boss, it also added copy abilities and gave it a visual makeover to suit the platform. To feature a predecessor within the game was an interesting choice and allowed the story of King Dedede’s kingdom-wide food theft to live on through another console generation. 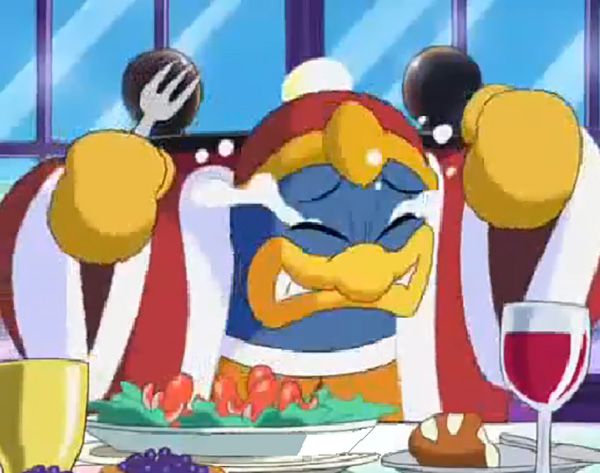 Two mini-games, in the form of Samurai Kirby and Megaton Punch, allowed nice distractions between adventures. Samurai Kirby was a timing-based game, effectively a reskin of Kirby’s Adventure’s Quick Draw game. When prompted, the one with the fastest reaction time wins, simple as that. That said, seeing Kirby characters with katana and top-knots is always worth a laugh. Megaton Punch is my favorite of these two. While at its core it’s a simple timing-based game of stopping a cursor on the sweet spot of a few meters, playing together with friends ups the tension considerably and makes a perfect punch all the more satisfying.

Gourmet Race was another comparatively simple mini-game. More notable for its music than anything, it offered a chance to face Dedede in a mad dash to the finish line all the while scarfing down a set number of snacks. With only three stages, it’s best as an occasional diversion, but it wouldn’t be Kirby Super Star without it. Dyna Blade, on the other hand, is a larger game that tasks Kirby with setting out through a progression of stages to face a giant, metal bird that’s threatening Dream Land’s crops. Featuring a world map (complete with an occasional wandering miniboss) and more linear progression, it was an interesting take on the Kirby formula. It only a single boss fight at the end but the showdown with Dyna Blade and finding out why she was at odds with you is always a treat. 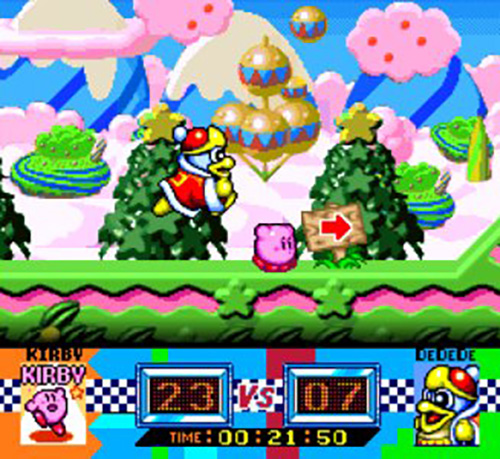 The Great Cave Offensive provides a fun twist on Kirby’s usual goals. As an adventure in pursuit of treasure, it’s your job to find scattered chests and items across its multiple stages. Some of these items were fun nods to other Nintendo games, such as Mario, Fire Emblem and Mother, among others. Based on how many of these treasures you found you would be scored, with the ultimate goal being to get out of the cave with every treasure and the grand total of 9999990G. Revenge of Meta Knight was a faster paced quest to stop its titular swordsman and his flying battleship, the Halberd, on his quest to end Dream Land’s “lazy lifestyle.” This is reflected in the mode having a time limit, requiring Kirby to be fleet of foot in his attempt to stop his rival.

Milky Way Wishes represents the largest game in the entire collection and the one with the fullest narrative. A little jester named Marx befriends and recruits Kirby to help him reach Nova, a giant mechanical comet in order to make a wish and stop the sun and moon from fighting. This leads to a quest across multiple planets across the galaxy atop Warp Star. What sets this mode apart is its approach to copy abilities. While they exist here, they aren’t gained from inhaling. Rather, Copy Essence Deluxes are found. These pedestals allow Kirby to switch his ability at any point once they’re discovered, though without them he’s unable to use any abilities. Add in a great twist finale and two of my favorite songs in the form of its map and credits themes, and you have my favorite portion of my favorite Kirby game. 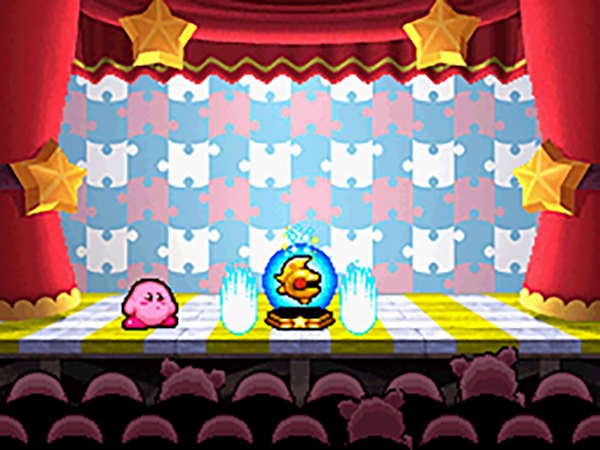 While that concludes the eight games within, there’s a final challenge in Super Star: The Arena. Upon unlocking it, The Arena serves as a boss rush mode that provides Kirby’s most daunting task. It’s a sort of contained crossover of the entire package, bringing all of its bosses from across the five fuller game modes to take on our pink hero. The only saving grace is a free choice of which copy ability to start with, a random pair to pick from between fights, and a few healing items across the entire ordeal. All of this has to be completed without losing your solitary life. The Arena would go on to be a highly recurrent feature of future Kirby games, ensuring that anyone worried about the Kirby series being “too easy” has true challenge waiting for them within.

That’s the end of my tour of Kirby Super Star, but even then I feel like I’ve barely scratched the surface of what I love about this game and why. This, Adventure, and Dream Land 2 together represent my three favorite games in my favorite over all series of games. To say I’m excited for Planet Robobot would be an understatement, especially seeing as Jet and Mirror are finally coming back after a long absence. The mark Super Star has left on the series is immeasurable, with a lot of its content and songs finding their way into the Smash Bros. series, a set of Kirby New 3DS cover plates emulating the woodblock style of its Japanese box art, and the continued presence of traditional features it founded. Even though I have Super Star on every platform its been released on, I can only hope it’ll find its way to the New 3DS’ eShop sooner rather than later.