Knowing me for any period of time will inevitably lead to the realization that I absolutely adore the Kirby series. Plenty of that will come to light in any of my other entries in this celebratory miniseries, but every love has a beginning. For me, that beginning was Kirby’s Dream Land 2. While the game was released in 1995, I wouldn’t have my own Game Boy until a few years later. Even when I was given it and Pokémon Red as my very first games for the handheld, Dream Land 2 was my go-to game for car rides, lazy afternoons, and staying up just a little later than I should have. I still remember the exact moment when I finally completed the game with 100%. After playing other entries, it may not be my favorite, but more than any other it’s a personal game that’s ingrained in my childhood and in my heart.

What Dream Land 2 brings to the table

As a follow up to Kirby’s Adventure, Dream Land 2 doesn’t feel nearly as expansive. With fewer stages and copy abilities, and even the absence of Meta Knight, it feels almost like a step back. That said, when seen as what it is – a direct sequel to the original Dream Land – the growth is fantastic. It brought copy abilities to the handheld and was a much bigger game overall. Likewise, it had extra features on the new Super Game Boy peripheral, adding a unique screen border, as well colors and sounds the Game Boy couldn’t provide on its own. 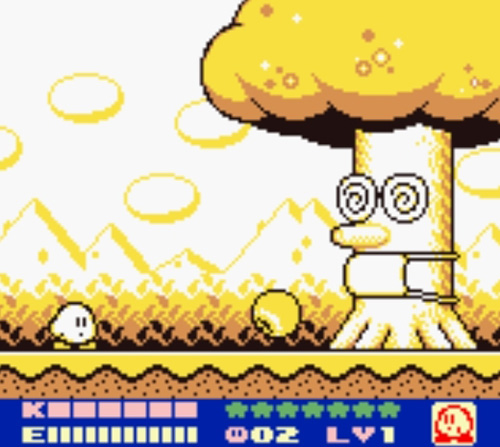 The style of the game felt much more whimsical as well, with the soundtrack being mostly upbeat and with a faster tempo. The world designs were also somewhat simplified, though without losing any of their polish. These tonal differences come courtesy of the game’s director, Shinichi Shimomura. Dream Land 2 was the first title in the series to not be helmed by Masahiro Sakurai, Kirby’s creator, and would be the start of a trend within the series as a whole. The differences between Sakurai and Shimomura Kirby games would become more pronounced as time goes on, but it all dates back to Dream Land 2.

The greatest feature Dream Land 2 brought to the series was a trio of new friends for Kirby to adventure with. By besting sub-bosses within stages, Kirby would free a captive animal who would then serve as his mount. Rick the Hamster, Coo the Owl, and Kine the Fish added a great feeling of variety as each effectively controlled as a separate character to Kirby. Rick was faster overall and wasn’t hindered by icy surfaces. Coo, on the other hand, could fly freely in eight directions, while also increasing your air speed to get through harsh winds – while also allowing you to inhale in the air. Kine was the trickiest to utilize, as fish aren’t exactly known for their mobility on land, though once in water you could swim freely, push through currents, and use copy abilities instead of Kirby’s water blowing attack.

The depth these three added to the game was amazing, not just due to their mobility but to how they interacted with Kirby’s own abilities. As stated before, the amount of copy abilities compared to Adventure had dropped, from 24 to a mere seven; however, each animal friend would alter how these abilities worked while you rode them! So instead of blasting forward as a fireball as Kirby, Rick would breathe fire with the same power. This meant the game had 28 abilities total when combinations were factored, and this would lay the groundwork for further experimentation with abilities in Shimomura games to come.

Dream Land 2’s other addition involved the overall game progression. Hidden in each world was a Rainbow Drop, serving as an extra collectible. If the game was completed with all of these collected, a new final boss would appear and allow you to reach the true ending. In this instance, it allowed Kirby to face Dark Matter, a recurring boss of the Shimomura Kirby games so powerful they could possess King Dedede and spread darkness all over Dream Land and beyond. Like the Star Rod before, Kirby would face this challenging final foe with a special weapon power-up. The Rainbow Drops would form the Rainbow Sword, allowing Kirby to fly freely and duel Dark Matter. Later games would follow this pattern, prompting full completion via well hidden secrets and ability based puzzles. 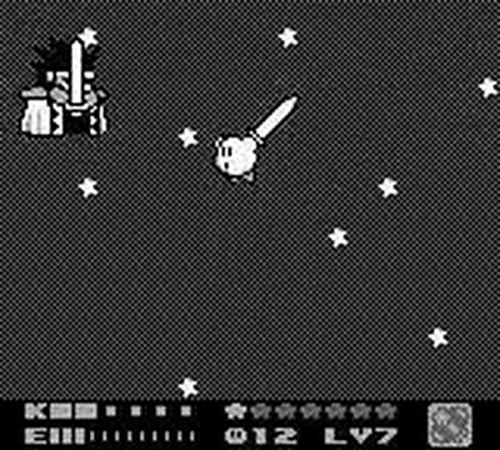 Kirby’s Dream Land 2 may not be as known as other games in the series it is one wholly deserving of recognition. Its additions to Kirby games are understated due to a lack of frequent appearances, but fans are always happy to see the animal friends even as simple cameos. Planet Robot’s key feature of rideable mech-armor certainly takes inspiration from them, leading me to hope that once I’m playing it I’ll be smiling just like old times.