I’m not one to say no to a good drink, especially when it’s poured by a set of practiced hands and an open mind. Whether you’ve spent some time in dives or not, a practiced bartender makes all the difference no matter how far you want to take your inebriation endeavors. If you want a look into that experience for yourself without the sticky floors and seedy locales (or if you’re underage, or drowning in self-sustained moral superiority), then Sukeban Games has the perfect cocktail for you. Take two parts visual novel, one part cyberpunk aesthetic, pour over your favorite anime trope, and serve it up on Nintendo Switch in Va-11 Hall-A.

This bartender action takes place in Glitch City, where the titular bar (we’re going to just call it Valhalla from now on) resides. You play as Jill, one of the bar’s three staff members — a character who’s now one of my favorite VN protagonists. Oftentimes, a point-of-view character can get lost in the more flavorful by design characters around them, but Jill holds her own, albeit in a subtle way. She’s great at her job, well spoken, but also has her own batch of quirks that come up from time to time. While the “goal” of the game is arguably to learn about Valhalla’s patrons, the real prize for me was Jill’s more personal journey unfolding along the way. 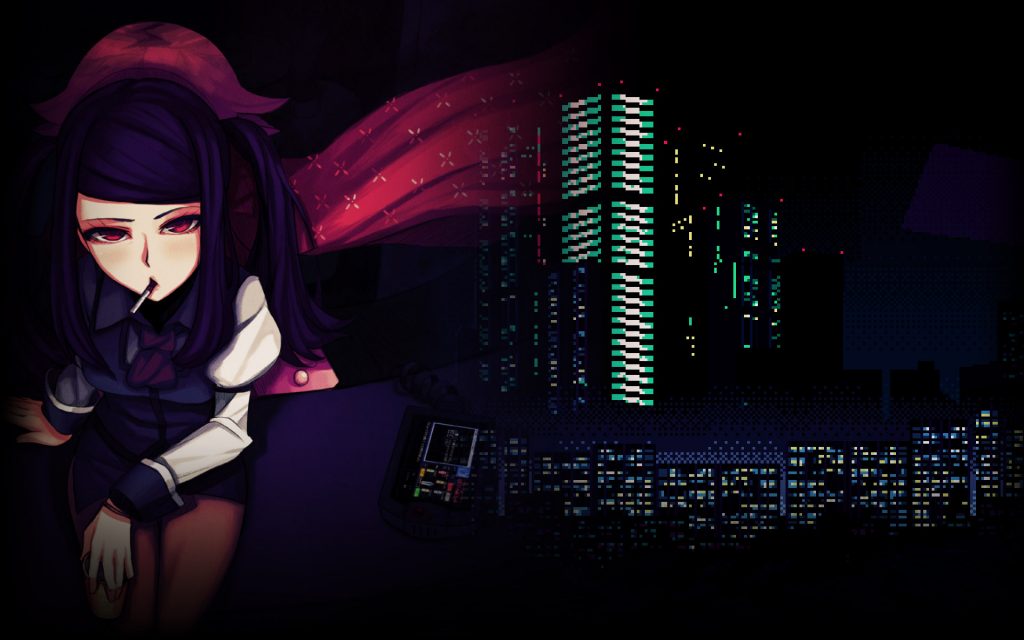 Speaking of those patrons, each brings a unique something to the game that makes fulfilling their orders worthwhile beyond the tips. You’ll host a robot idol raising questions about identity, be at the mercy of corporate party of corgis, and even a brain in a jar. Nothing’s too out of the ordinary for the establishment, and while some guests are more welcome than others (both from Jill’s perspective and my own), that comes with the territory and keeps any one story from overstaying its welcome.

Before these characters share their lives with you, you’ll be given their drink order(s) and put to task with the only real way to influence them and the game at large: mixology. In a dual Joy-Con setup, your D-Pad will put you in control of a drink guide while the stick handles selecting ingredients. It took some time to get used to this, as it’s effectively playing with multiple menus at once, but it works well save for the occasional ruined order (which is ultimately a painless process, as you only get ‘judged’ once the drink is manually served). While sometimes it’s as simple as searching a drink by its name, other times you’ll be told to make a bitter drink, or a girly drink, or any number of other specificities. 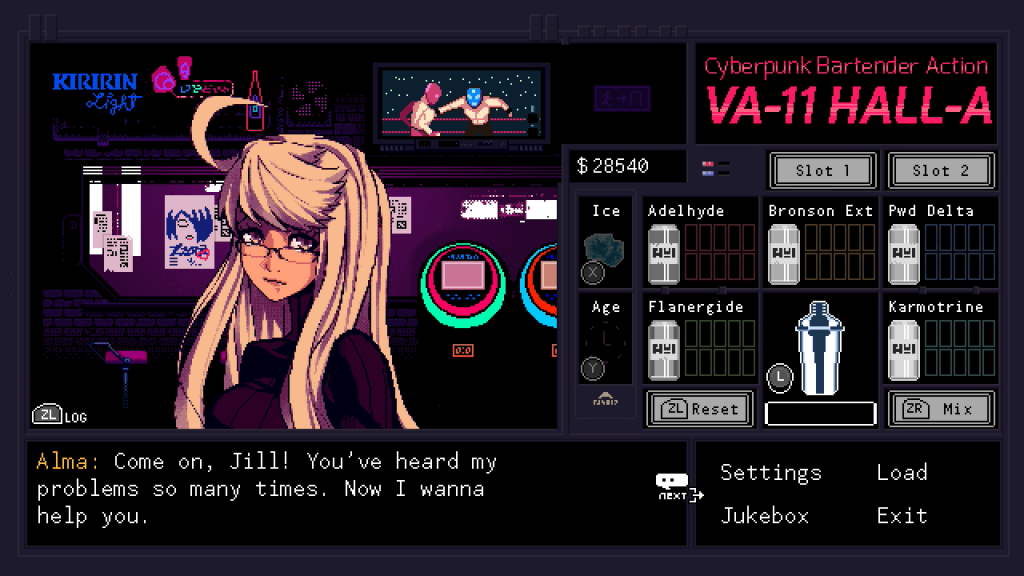 Depending on how well you can manage those requests (as well as how strong you make it with optional alcoholic content), you’ll see different sides of the cast. This interplay was so much more engaging to me than dialogue trees, offering up a more justifiable reason for why a character might be closed off versus baring it all. I experimented with sticking to drinks to the letter, offering up the opposite of what was asked, and getting robots absolutely plastered. Sure enough, this yielded varying results depending on the character, and it gives the game some replayability.

Along with customer satisfaction, your performance determines your end of night pay. This has its own batch of consequences, as every workday also has a bit of time at Jill’s apartment. If you don’t have enough savings to pay your subscriptions and bills, you’ll lose access to certain features during these interludes over time. You shouldn’t just stash your cash though, as at points you’ll be told that Jill’s thinking about buying something online. Ignoring that will leave her distracted during her shift, making your job trickier (an all too accurate depiction of a typical working day). 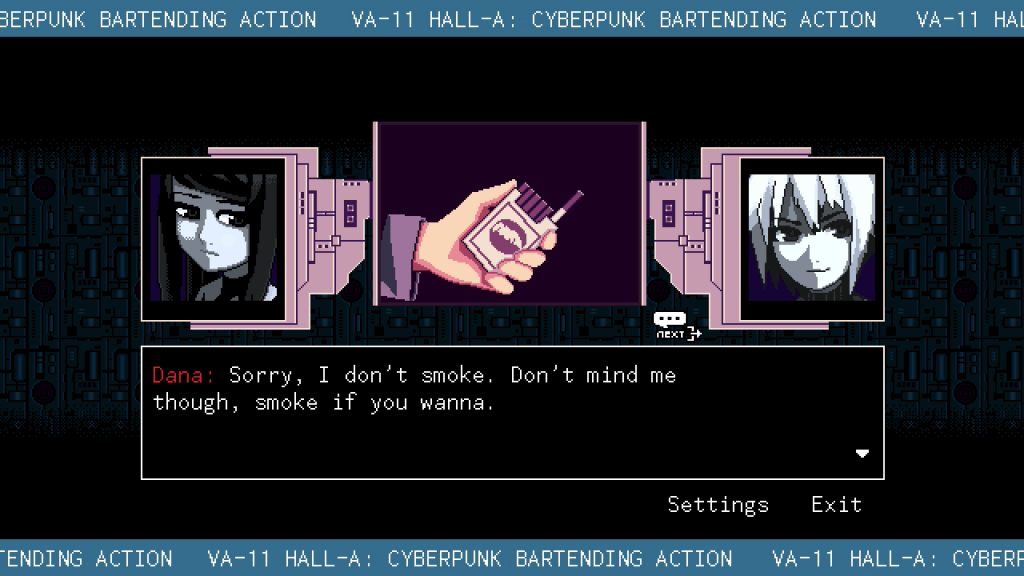 It’s in that and other mentioned bits of nuance that Valhalla truly shines. Your menu at the apartment is Jill’s phone screen, with different blogs and apps to check before heading out. The game’s soundtrack is represented as a jukebox you set up at work, giving you some freedom in what you hear while you mix drinks and change lives. It’s the perfect game to play while lying across a couch with headphones in and the lights down, but it’s engaging enough both with its writing and bartending to keep you in that perfect chill.

The only thing to be wary of when it comes to Valhalla is that its subject matter can veer into topics not everyone might be comfortable with. While the tone is often playful and comedic, especially once you get accustomed to everyone’s personalities, topics can range from sex work to suicide. It’s nothing to shy away from, and the game’s tone does shift to match its more emotional and heavy beats. That the game can pull this off with its pixel art portraits and dialogue alone is praiseworthy; and as long as you’re prepared for what’s on the menu, it’s time well-spent reading. 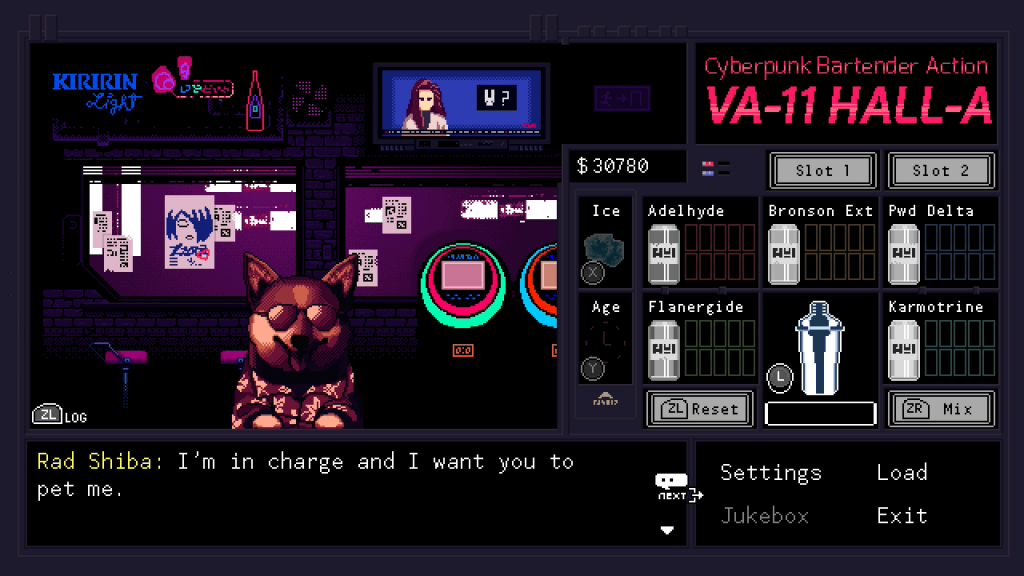 We’ve been on a bit of a visual novel kick lately, with standouts like Steins;Gate and the Ace Attorney Trilogy already available. Today alone, we’re getting World End Syndrome and this neon-tinged beauty. It’s not perfect in its writing and execution, and some of its subject matter might be a bit too strong for some patrons; but with its unique spin on the format and likable core cast, it’s worth settling in for the night with Va-11 Hall-A.