These days, I very rarely play games in handheld mode. I hold nothing against the idea of it, but if I can play a game on the big screen, I will, and the Nintendo Switch is brilliant for allowing the option with practically every game on the platform. There’s one genre I always prefer to play handheld though — the Visual Novel.

Visual Novels are basically like sitting down with a good book, and I’ve spent hours upon hours staying up late into the night playing the likes of Ace Attorney in bed. Unfortunately, the Switch’s library over these first two years has been surprisingly sparse on the visual novel front, but in the month of February 2019, two of the best examples of the genre are getting released, with Ace Attorney Trilogy launching in Japan in just a matter of days as of this writing and Steins;Gate Elite hitting the rest of the world.

So, thanks to this new opportunity to replay Steins;Gate in a new way, I finally got my chance to sit down and get comfy with an undocked Switch…

After originally released in Japan back in October 2009 as a timed Xbox 360 exclusive, Steins;Gate has been ported to a wide array of consoles and even received a well-regarded anime adaptation. Now, a decade later, Steins;Gate Elite is something of a culmination of this past decade of Steins;Gate media. 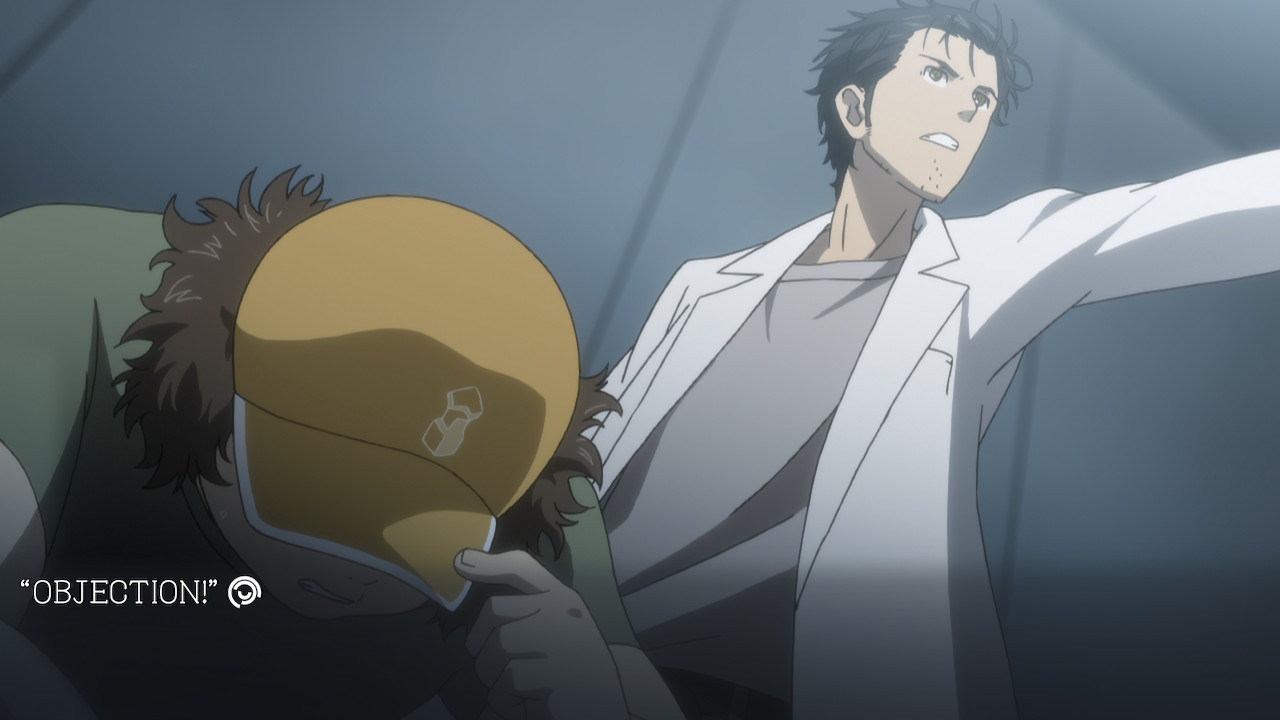 The game takes the original game’s script but swaps out the visuals entirely, with the gorgeous artwork being replaced with admittedly more dynamic scenes from the anime. This is what will likely prove most divisive with fans of the original — a lot of the first game’s appeal came from its very unique visuals, which managed to capture the atmosphere of the blazing hot summer the game takes place in.

The tradeoff, though, is that Elite becomes one of the most visually engaging visual novels out there. What the characters now lack in detail, they make up for in motion. Anger, despair, and happiness all come across a lot more clearly. 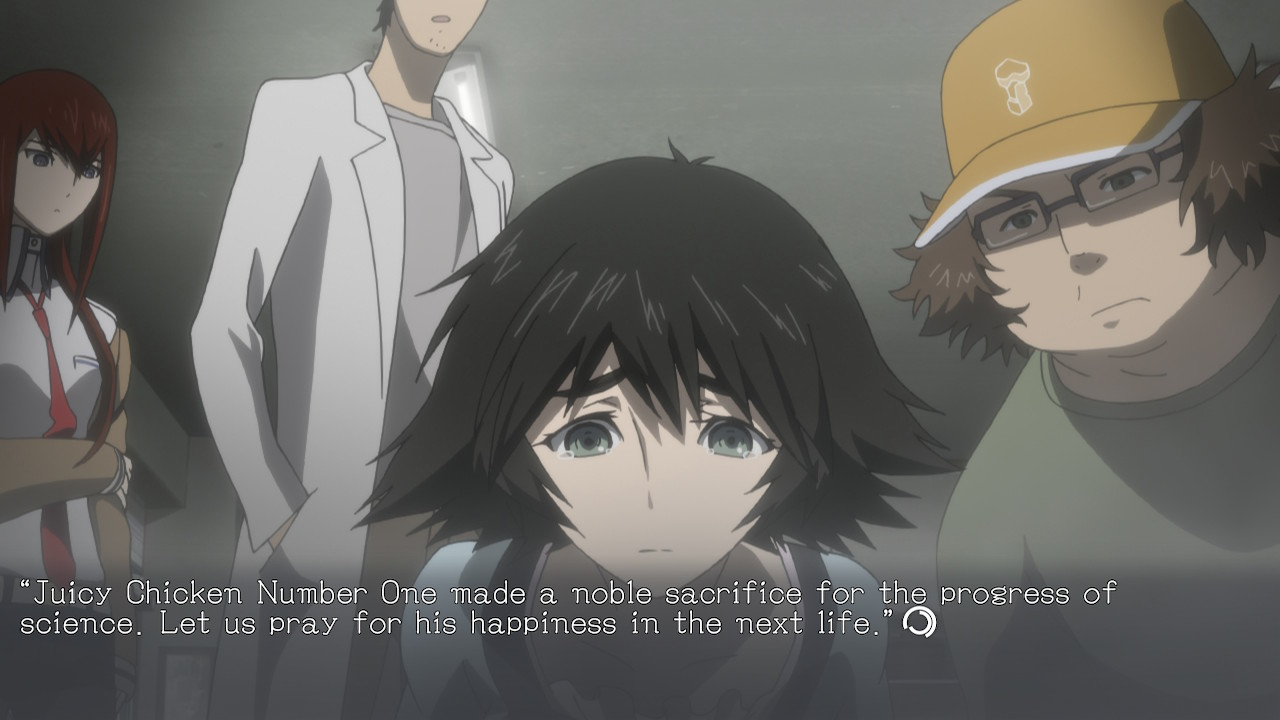 In a way, it’s unfortunate the developers at 5pb. didn’t choose to include a toggle between the two styles.

Visuals are one thing, but, ultimately, the core of any visual novel is the latter part of the name — the “novel.” Thankfully, this is where Steins;Gate truly shines.

Throughout game you follow the life and internal monologues of Okabe Rintaro, or “Hououin Kyouma” as he insists on being called. The perfect example of the “chunibyou” subset of otaku (those who continue to act like middle schoolers well into adulthood), he starts the game as an incredibly unlikable protagonist, albeit an amusing one at times. Acting the part of a mad scientist, he’s quick to start arguments, talk to himself, and be an all-round nuisance. 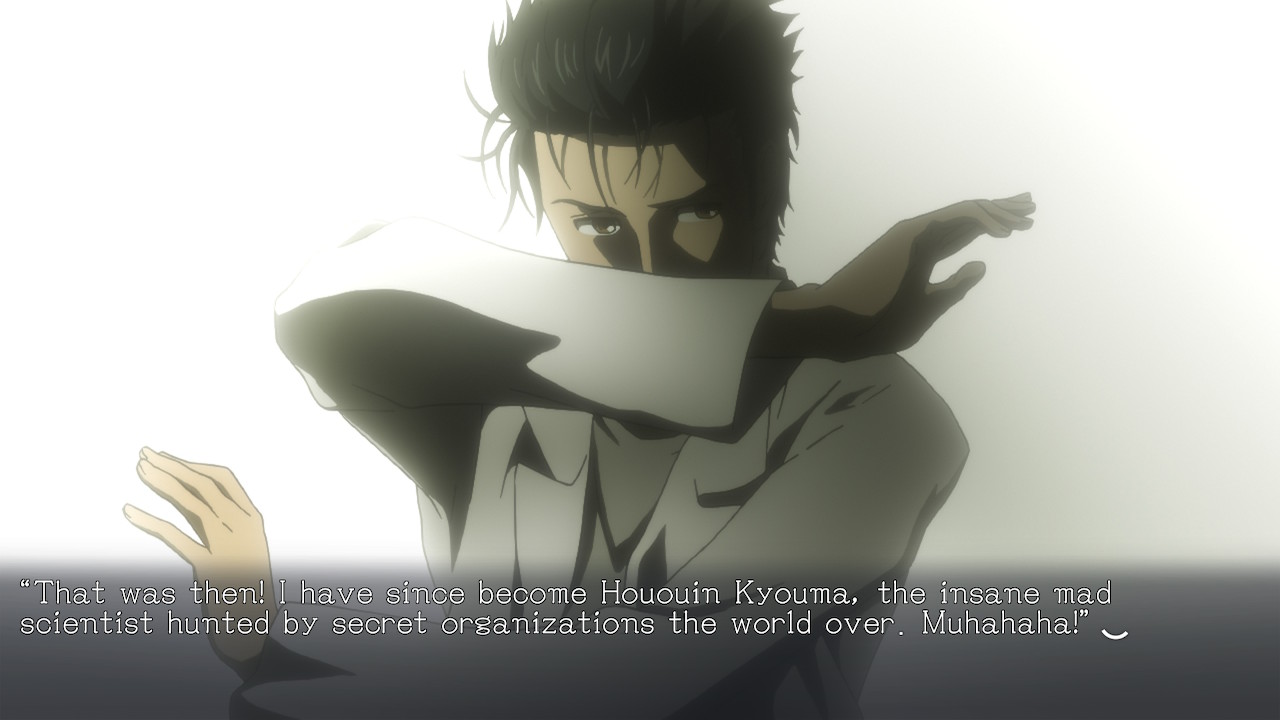 The game boasts a rather large cast of characters who enter Okabe’s circle of “laboratory members” in one way or another. There’s Daru (the perverted hacker), Mayuri (Okabe’s ditzy childhood friend), Kurisu Makise (a true genius who just came back to Akihabara after studying in America), and many more. While a lot of these fall into tropes at first, you really begin to warm up to them as their motivations and hidden strengths start to show through.

It’s the event that kicks off the story that shakes things up: time travel. I’ll keep this brief as the cast’s slow realization that they’ve inadvertently invented a time machine is worth experiencing yourself, but Steins;Gate is one of the best examples of a time travel story, despite first impressions. 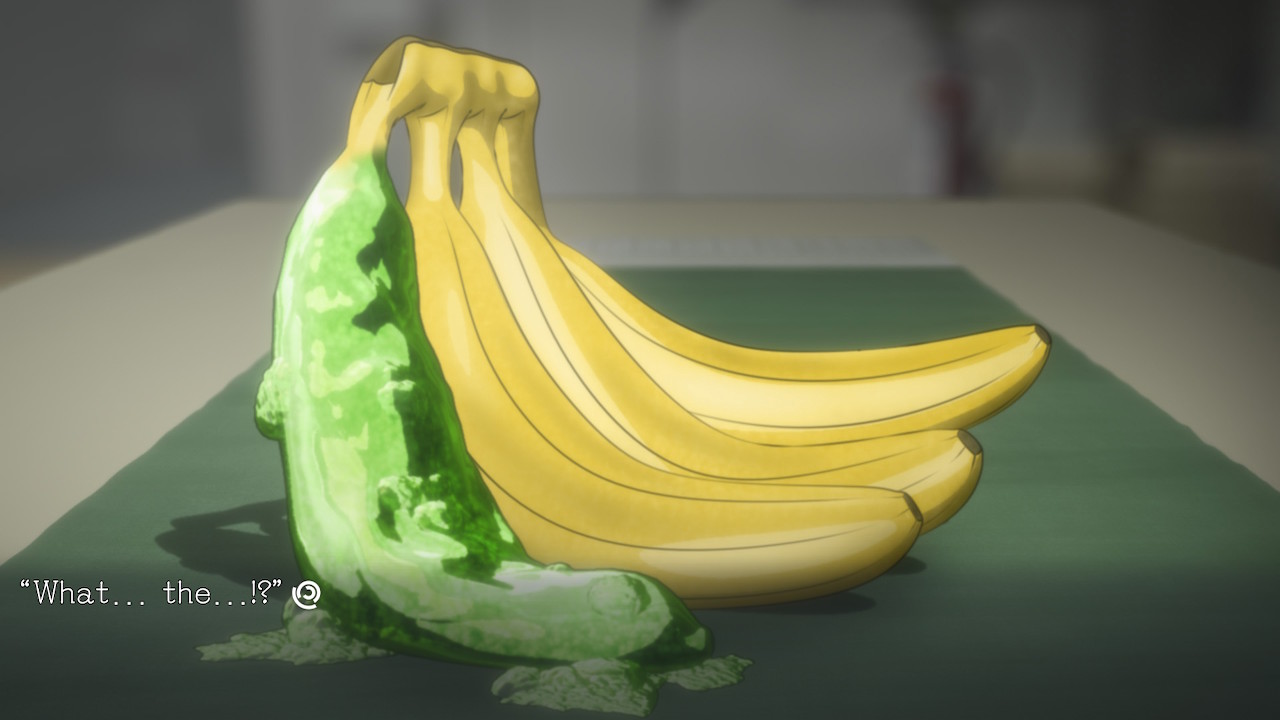 The butterfly effect is the main theme here. Every small change they make to the past, typically via text message, has massive ramifications, with the first change bringing someone back to life who should have been murdered. Conspiracies abound, and, after the first ten hours or so, it becomes hard to pull away from the gripping twists and turns.

In terms of gameplay, Steins;Gate is like most typical visual novels, in that there’s very little interactivity.

First up is the glossary. Certain words that pop up during the game are highlighted, and a quick button shortcut takes you to a Tips List that lets you read up on the definition. This is honestly a great way of learning about specific facets of Japanese culture, like the aforementioned chunibyou, as well as real world history like the online time travel legend that was John Titor. That said, various locations, objects, and media, are given fictional names to get around copyright law, but in most case it’s pretty easy, and humorous, to figure out what they’re based on. 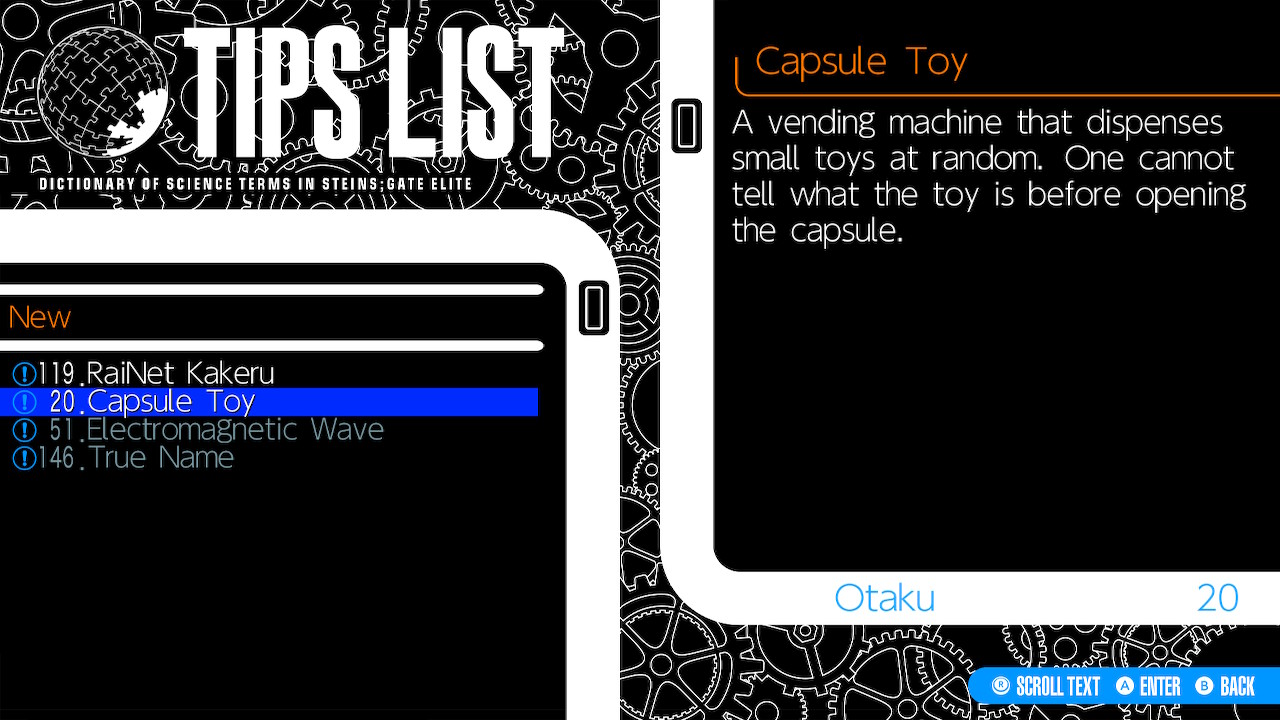 The only other major part of interactivity is Okabe’s cell phone, which is stripped back somewhat in Elite. Throughout the original game you could bring it up at any time and customize it with wallpapers and ringtones, but this time around it’s simplified to appear automatically when Okabe receives, or needs to send, a text message.

It’s these text messages that ultimately lead to the different endings, with are often tied to specific characters. This is where the most work seemingly went into Elite, with these ending routes getting brand new, never-before-seen anime scenes. You’ll want to view them all, too, for the sake of completion — but also to get a better understanding of each character.

Thankfully, quick saves and skip functions make it incredibly easy to get to each decision point, where the game mercifully pauses to let you experiment with the other options.

It was great to replay Steins;Gate again, especially with this new look, but I’m torn on whether or not it should be recommended over the original if you have the option. For Switch owners who want to scratch that visual novel itch at long last, though, it’s a great place to start. 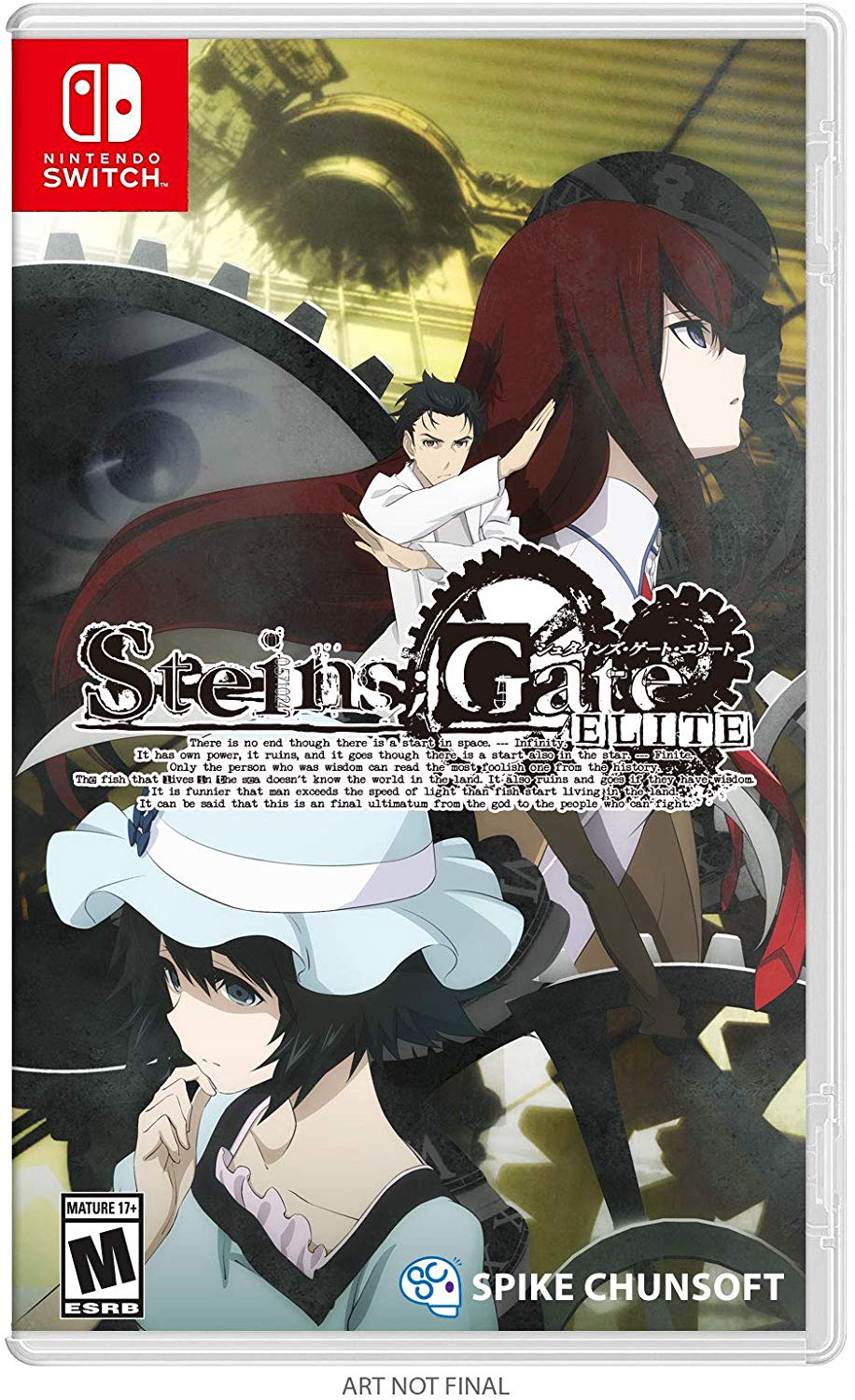