If you know me, you probably know that Ace Attorney is my favorite franchise of all-time. Ever since I first played one of the games in 2009, the stories of Phoenix Wright and co. have stuck with me. I’ve played the original Phoenix Wright trilogy countless times across a myriad of platforms, and I’m happy to say that the new Switch release of the Phoenix Wright: Ace Attorney Trilogy is the definitive place to play one of, in my opinion, the finest trilogies in video game history.

Ace Attorney is also one of the finest entries in the visual novel genre. It perfectly balances story with gameplay, beautifully mixing investigation scenes with high-energy courtroom segments. The soundtrack is one of the best around, and the classic chiptunes hit me with full force nostalgia while playing through some of the cases again. I absolutely adore this franchise, and I urge you to try out the trilogy on Switch if you’ve never had the chance to play an Ace Attorney game.

For context’s sake, the PW:AA Trilogy includes the first three games in the lengthy Ace Attorney franchise. That’s the original game, Justice For All, and Trials and Tribulations. You’re looking at about 60 hours of gameplay to unravel all 14 cases across the three titles. The games are largely unchanged from their previous releases, but there are some extremely helpful quality of life upgrades that push the Switch version over the top.

Note: This review focuses on the changes and upgrades in the Switch version of the game.

No dual screen? No objections

First of all, playing an Ace Attorney game on the big screen is amazing. These games are filled with intense, back-and-forth legal drama that have always been experienced on a smaller screen, and it feels great to watch trials unfold on some larger real estate. Some of the games did appear on the Wii Shop as WiiWare, but this collection feels like the franchise’s true big-screen debut. The visuals are incredibly crisp, and I love seeing the familiar art looking better than ever in beautiful HD on my TV. 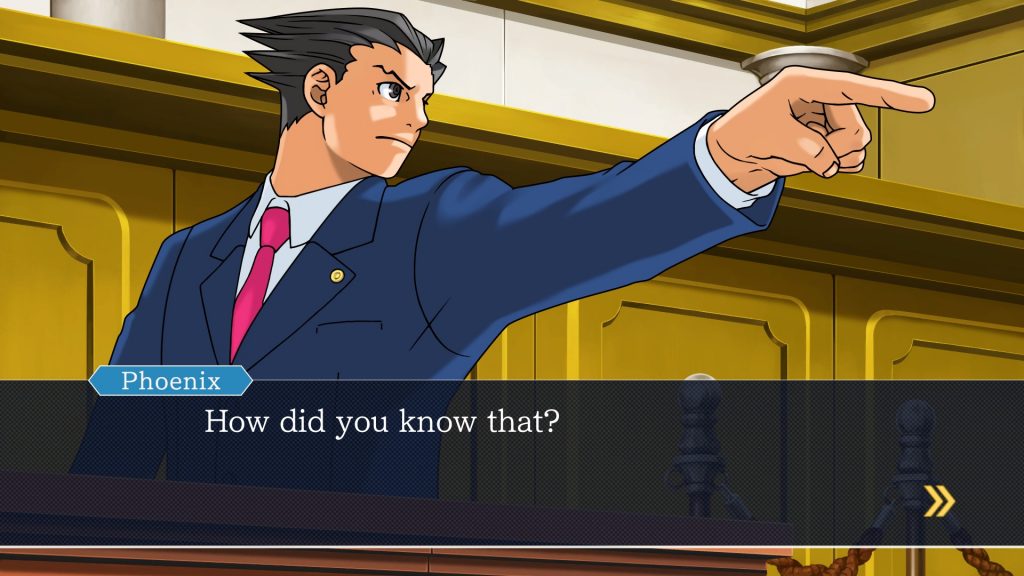 The game transitions very well to handheld mode, as well. As much as I loved playing the trilogy on my TV, Ace Attorney still feels at home on a handheld. One of my worries for the trilogy on Switch was that it would lose some of its ingenuity with the absence of the DS’ second screen, but overall, I’m impressed with how well Capcom was able to transition to one screen for this new release. The court record, where you can find all of your stored evidence, used to live on the bottom screen back on the DS. Now, press R at anytime and the court record pops up in the center of the screen. It’s unobtrusive, and the transition is seamless between gameplay and the menus, and it felt completely normal to me within just a few minutes of starting the game.

Ace Attorney games use a penalty system to punish you when you present an incorrect piece of evidence or make a wrong dialogue choice while in court. In the DS versions, the first game used five exclamation points to represent your health, while the subsequent games both used a health bar. Now, all three games use the same health bar. It’s a small change, but it brings all three games a more connected, unified experience. 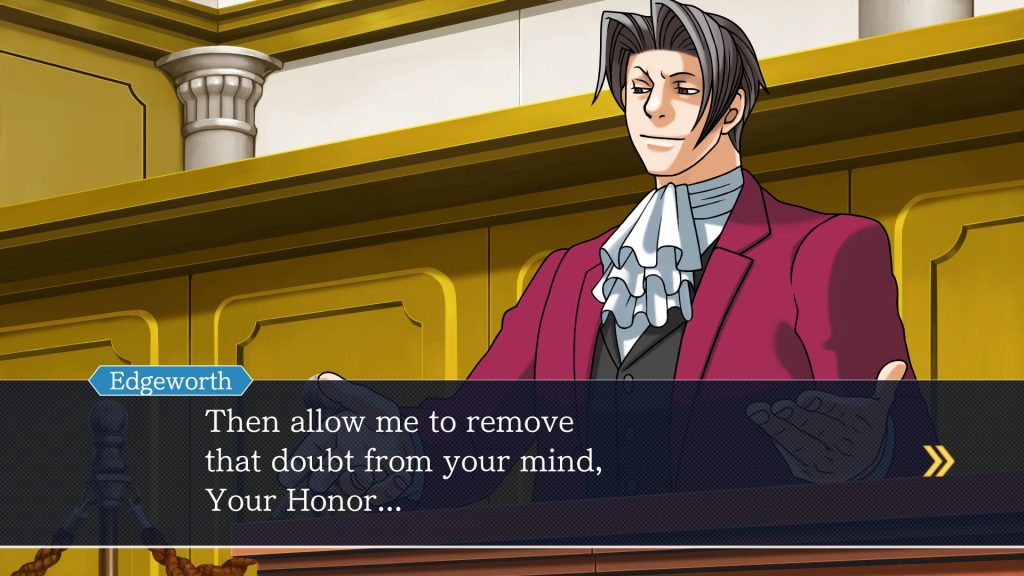 There are some new, customizable options that also add to the gameplay. In previous Ace Attorney games, you had to watch the text boxes slowly progress on your first playthrough. Then, if you replayed the game, you could progress through the text more quickly. This time around, the game gives you the option to speed through the text right off the bat, which is a great option for returning players. I just wish there was a text log you could open up to review the entire conversation from a cross examination or witness interview. More recent games, like Spirit of Justice on 3DS, had this option, and it would have been a nice addition to this trilogy.

Without a doubt, my favorite change in the trilogy comes in the investigation segments. In the originals and the 3DS re-release, hunting for evidence could be cumbersome at times. When investigating a room, there was a blue cursor on the screen that you used to examine evidence. Sometimes, when I was stuck in an investigation, it was hard for me to remember what I had and hadn’t looked at. Now, Capcom replaced the blue cursor with a magnifying glass that displays a checkmark when you’re hovering over something you’ve already examined. It also changes color when you’re highlighting something that you can examine. It’s an incredibly helpful change that streamlines investigation without taking player involvement out of the equation.

The Phoenix Wright: Ace Attorney Trilogy is a very special collection of games that holds a place near and dear to my heart. I hope that every Switch owner picks up the trilogy, because there’s really never been a better way to play this set of games. For returning players, some quality of life improvements might be enough to warrant a repeat purchase, and I know most hardcore fans will probably pick it up again regardless.

I had reservations going into a single-screen Ace Attorney adventure, but after experiencing Ace Attorney the new way, I have no objections. The stories told in the Ace Attorney trilogy are some of the most special stories to me in all of gaming, and I hope you’ll try and crack these cases for yourself. 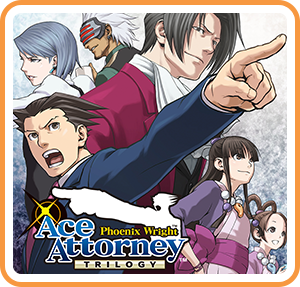