We live in a time of social isolation. The mere idea of going places now seems like its own sort of fantasy, a relic of a time that in reality only stretches back months but feels like eons. Confined by the walls of our homes, the allure of video games as a means of escape — of living vicariously in a world where you can go places and do things — feels more pronounced than ever.

Video games are good at creating worlds to get lost in. Whether it’s the hue-soaked urban landscapes of Splatoon or the dense, secret-filled levels of a Mario title, it’s much easier to lose oneself in the minutiae of a game’s environment than it is in the sparse detail of a novel or the crammed frames of a film. You’re allowed the opportunity to explore and venture and grow at your own rate, and the feeling of simply being in a world removed from our own is so much more visceral as a result. But rare is it to find a world so creative, majestic, and expansive that you take in every sight and sound as a memory to treasure.

Eight years ago, when I played Xenoblade Chronicles for the first time, I knew it was one of those rare experiences. But now, in the time of quarantine and isolation and uncertainty, those sensations are stronger than ever before. 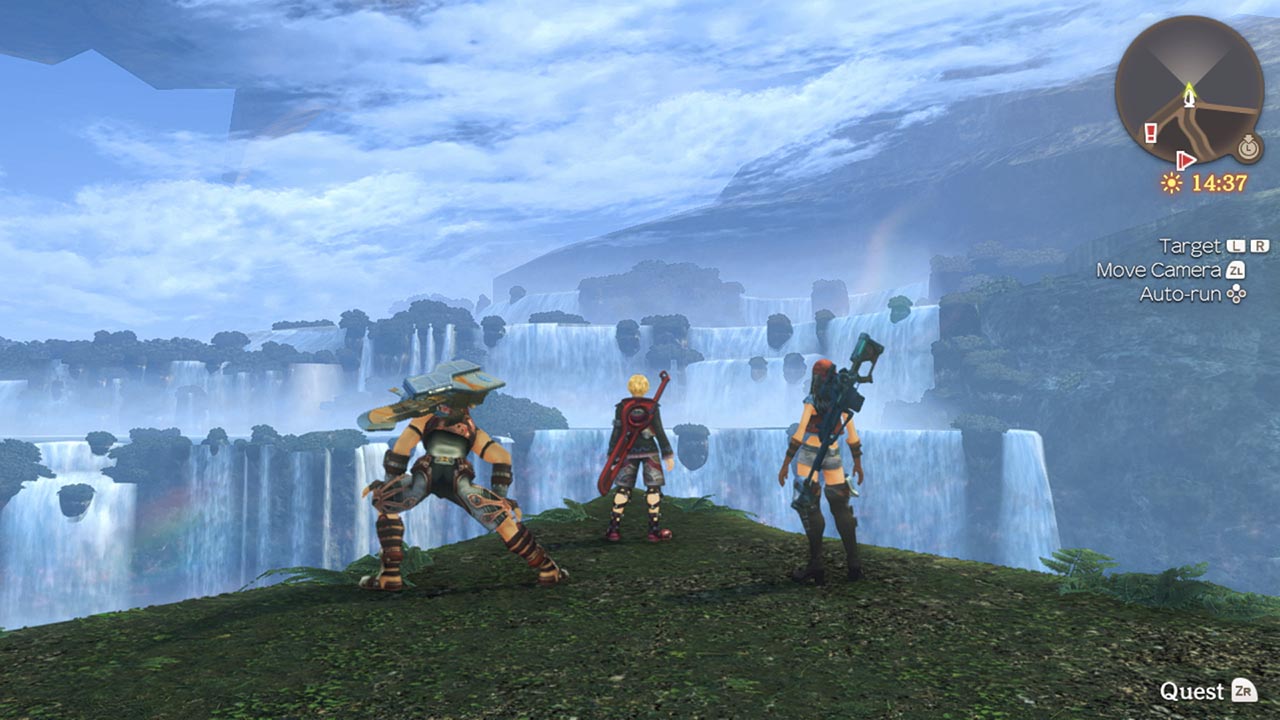 When it was initially released a decade ago, Xenoblade was touted as a game that felt like a step forward for JRPGs after a generation of uneven stagnancy. It’s not hard to understand why — while hardly like the JRPG greats of the ’90s Golden Age for the genre in terms of gameplay or design, Xenoblade channels the spirit of what made those games so renowned in the first place: crafting an adventure of breathtaking scale, monumental stakes, and astounding creativity that effortlessly whisks the player away to a world beyond our own.

Xenoblade is in many ways a classic JRPG story — the tale of Shulk, a young and geeky mechanic, and the Monado, an iconic red blade with the apparent power to change the future. After experiencing a personal tragedy, Shulk sets out to seek revenge and ends up collecting a band of like-minded comrades, only to end up in a conflict that embroils the entire world. But this simple, spoiler-free description belies the sheer roller coaster the plot becomes, as well as the sheer skill and delicacy used to convey it: the game uses top-notch cinematography, voice acting, and expressionism to tell a story about loss and the cycle of revenge. 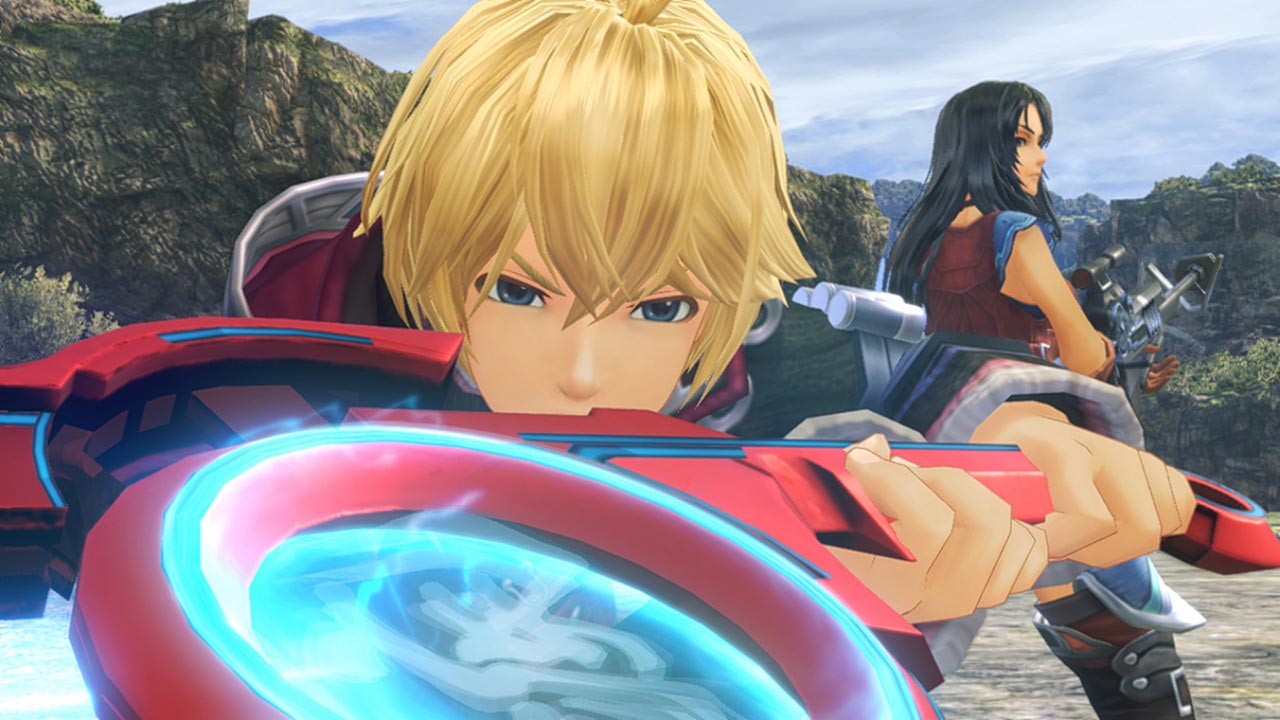 If you couldn’t tell by that long opening spiel about worlds, I’m absolutely enamored by Xenoblade’s setting — few JRPGs have managed to feel so congruous yet so creative. The Bionis and Mechonis are host to countless locations that inspire sheer awe, especially now with the boosted graphics of the Definitive Edition. There’s no feeling like watching the wispy ether of Satorl Marsh at night, or beholding the massive ocean of Eryth Sea, or discovering one of the game’s myriad secret areas tucked away in out of the way locations… Nobody does environmental design like Monolith Soft does, and there isn’t a single area in the game that doesn’t inspire some sort of marvel at its beauty.

Which doesn’t even cover the sheer gorgeousness of the soundtrack, which somehow delivers on both melancholy piano pieces and rip-roaring rock ‘n’ roll in equal amount while making neither sound out of place. The list of top tracks is literally too long to list off, each suited perfectly to its situation and location — whether it’s the grandiose strings of Gaur Plain or the rollicking guitars of Mechanical Rhythm, it’s easily one of the best JRPG soundtracks to ever exist. When you have Yoko Shimomura compose your main theme, you know you’re in good hands.

But more than in the sheer aesthetic, Xenoblade fleshes out its world via an intricate web of sidequests and characters at a volume that seems overwhelming. Dozens, if not hundreds of named NPCs populate the two titans’ landscapes, each having one or more small connections to other named NPCs; and as you help them out with their various ails you’ll slowly start to see a web of connections form in your Affinity Chart, filling the expansive world with an impressive array of characters. Add in long-form sidequests, like the Colony 6 reconstruction, and Xenoblade isn’t a game wanting for content — and at the same time, it’s not one forcing you to waste your time with that content if you don’t want to. It may be a case of quantity over quality, but the quality that is there does add to the game experience, allowing you to pace yourself as you’d like. Would you rather charge through the story and whet yourself on enemies the old fashioned way? Or clear a lot of sidequests to boost your level so you can breeze through new areas and take your time exploring? 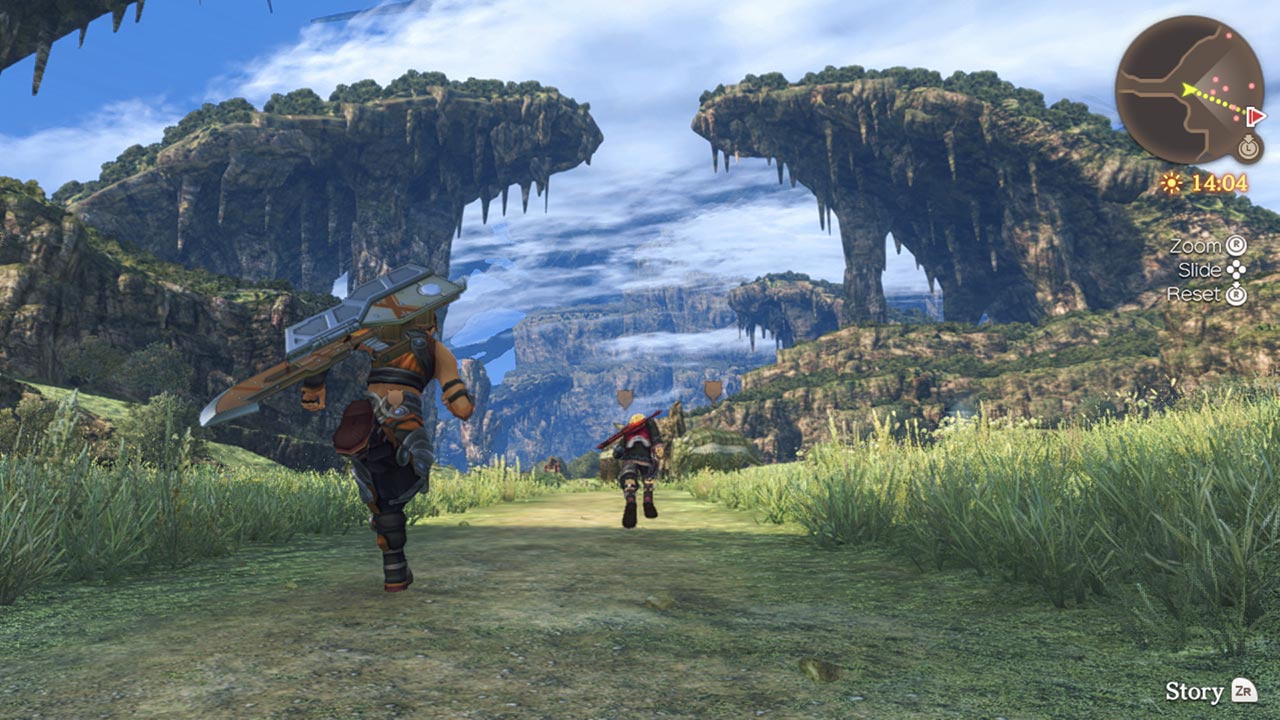 That’s part of what makes Xenoblade so alluring during this stressful time — for a game that does require a lot of time and attention, it’s a very atmospheric, relaxing experience. The mere act of wandering around, taking in the sights, accidentally getting ganked by a passing Lvl 90 monster, and then laughing about it feels cathartic, in a way. It’s a game that’s engaging, but not demanding. It understands that the pace of a JRPG should tend towards a slow, easy burn rather than pulse-pounding action, and it carves the experience around enjoying those vistas. I can’t count the number of times a quest brought me to a secluded location of the map, only to end up standing around looking at my surroundings for minutes at a time before getting back to the task at hand.

The combat of Xenoblade feels a bit simpler now than it did when initially released, but that fact only accents the rest of the game’s “taking it all in” vibe. Battles aren’t based on the intensity of button mashes; but rather positioning, timing, and planning, with each character playing vastly differently from one another. From the tanky aggro-drawing abilities of Reyn to the difficult-but-almighty magic of Melia to the grab bag of arts used by the heropon Riki (the greatest video game character of all time; I will accept no dissent on this issue), there’s plenty of variety in play styles to keep you interested. It ultimately doesn’t trend towards the same complex flow that Xenoblade 2 would develop later, but it has advantages to its more straightforward mechanics — like the fact that basic encounters tend to go a lot quicker. 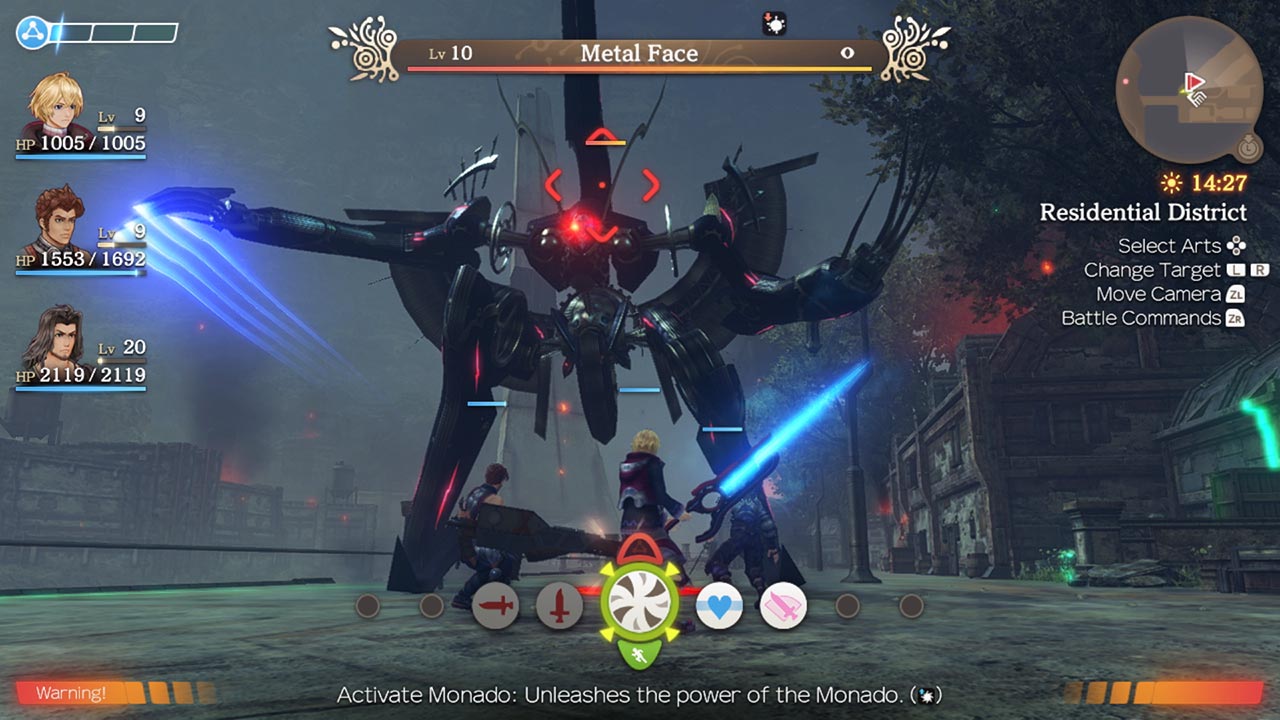 All of these attributes alone, along with the updated graphical features and rearranged tracks, would make the Definitive Edition an absolute recommendation… but the DE isn’t limited to just the base Xenoblade Chronicles experience. A new Melia-focused epilogue titled Future Connected has been added at no added cost, a proverbial after-dinner mint supplementing the full course meal of the main game.

Future Connected takes place entirely within a new location — the Bionis’ Shoulder — offering about 10-15 hours of content, which is quite sizable considering. Shulk and Melia get some wonderful character moments alongside new additions Kino and Nene (can’t have enough nopons in my life), and a couple minor players from the base game get more of a spotlight. While it has a plot that’s oddly straightforward considering the famous twists and turns of the main game, FC works great as a chaser and as an opportunity for Xenoblade to finally allow something nice to happen to Melia in her life. And whatever few hints it has at the future of the franchise will undoubtedly keep fans engrossed for some time to come. As a DLC add-on it might feel slightly lackluster, but again: it’s packed in with the rest of the game. And that’s just adding more delicious food to an already stacked banquet.

In the decade following Xenoblade’s release, Monolith Soft has proved themselves as masters of the craft of building large and expansive worlds, both in spinoff/sequels (Xenoblade Chronicles X and Xenoblade Chronicles 2) and other franchises (The Legend of Zelda: The Breath of the Wild). In the wake of those advancements, logic would follow that this first foray into such titanic scale might prove lacking in comparison — instead, Xenoblade Chronicles feels tighter than ever, able to balance both the focus and direction of a typical RPG with the grandeur and freedom of a more open-world styled game. 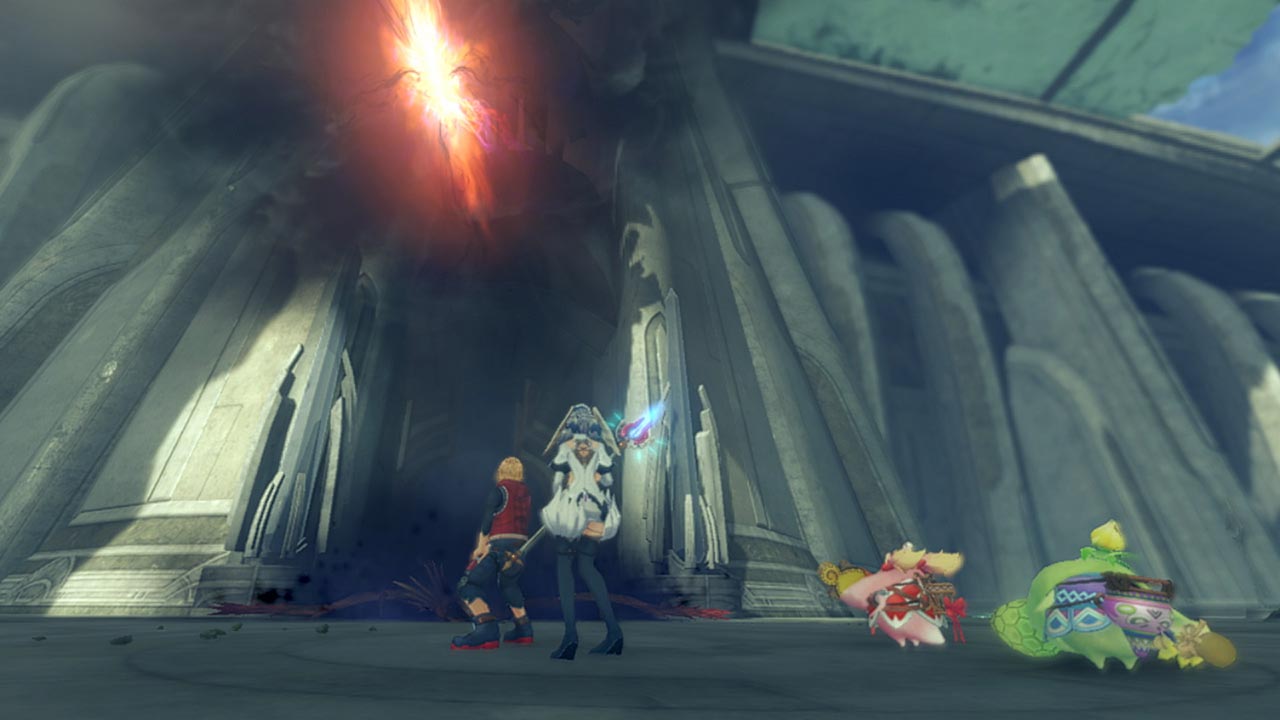 Xenoblade Chronicles is a game that draws you into its expansive universe and never lets go. Few, if any, games feel as enticingly estranging. And in a time when we could all use a break from the world around us, discovering a new one to get lost in feels all the more special. It’s a game that offers both the tearjerking sorrow of a song like the “Main Theme” and the heart-racing drama of “Engage the Enemy.” One that features both the agonizing yells of Shulk in the throes of despair and the memetic cries of “Now it’s Reyn time!” One that stands with both some of the most picturesque locations in the entire medium and a story full of small, intimate moments. Much like its world, it’s too layered and grand to be fully compressed into words. And that’s why you should experience it for yourself.