Review – WarioWare: Get It Together! 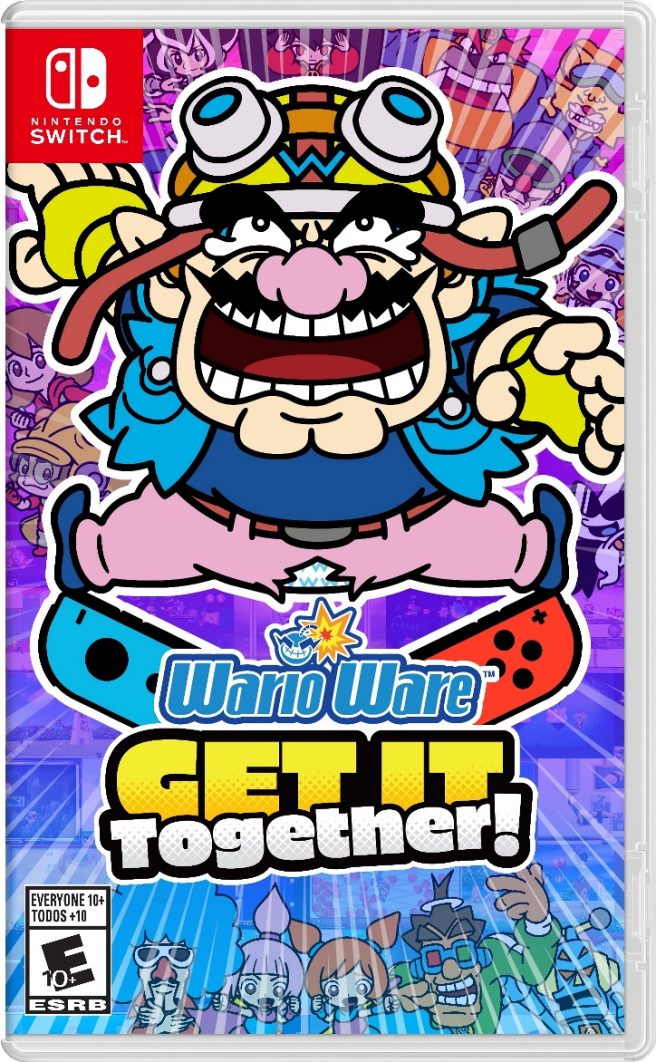 After a greatest hits release and years of whatever Game & Wario was, Nintendo’s resident greedy game dev has reassembled his comrades and cronies for another brand-new superfast microgame jam. WarioWare: Get It Together! represents something of a return to form for the franchise, taking it back to its roots as an assortment of seconds long oddities delivered rapid fire, but with some new ideas for good measure.

See, this time around Wario and the gang have been sucked into the (micro)game, turned into cursors and playable characters themselves to take on a whole horde of bugs. It’s a twist on the familiar, though not quite to the heights of some of the series’ older entries. Still, it represents a solid entry and the kind of game that’s right at home on the Switch.

Even more than the multiplayer mayhem, the most game-changing element of Get it Together is in how you play microgames. Thanks to the game’s story set up, you’re actually controlling the WarioWare Inc. crew in each and every microgame, with all of them having unique mechanics and movement options. Wario himself gets a jetpack and can tackle forward, while Young Cricket instead has to walk along the ground while having a prominent jump. Even with this shift to controlling a cursor, the one button roots of the series are alive and well, with the true impact being how much variety the roster brings. 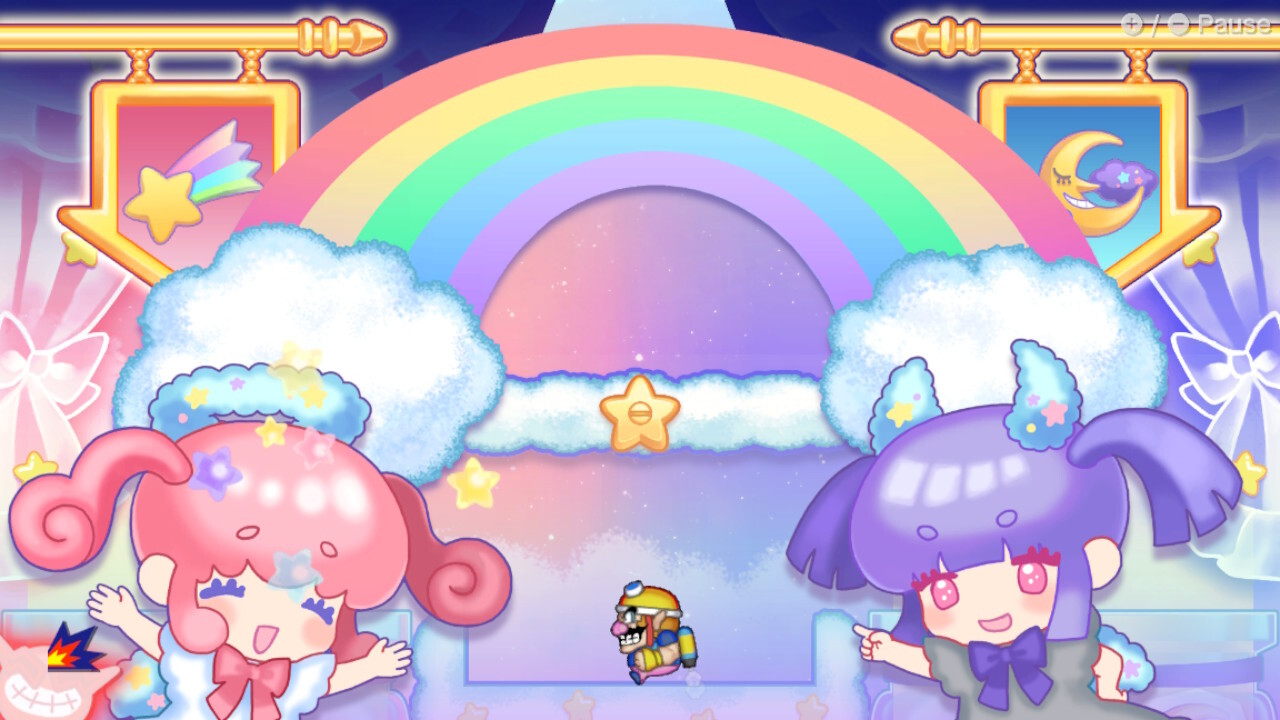 There are over 200 microgames in Get it Together, each with variations based on the current difficulty. Thanks to over a dozen playable characters that can find themselves within these games, the possibilities skyrocket while remaining “simple”. Since who you’re playing as changes after each microgame, with a few exceptions, the trademark tension and quick-thinking is present and accounted for. Even with timers on stages being generally longer than most past WarioWare games, things can still get out of control (in the best of ways) as the speed ramps up.

Despite the freshness it breathes into the formula, this piece of Get it Together doesn’t always work. Some of the characters either move completely on their own (Kat never stops jumping) or not at all (18-Volt sits still, but can grapple to certain points when necessary) and even with time to calibrate to that it’s odd to be randomly restricted in a series where reflexes are key. It’s possible to avoid selecting these characters outside of a few exceptions, and their mandatory involvement isn’t unbearable, but I definitely had my share of failures thanks to a character not being able to move in a way that meshed well with the current microgame. 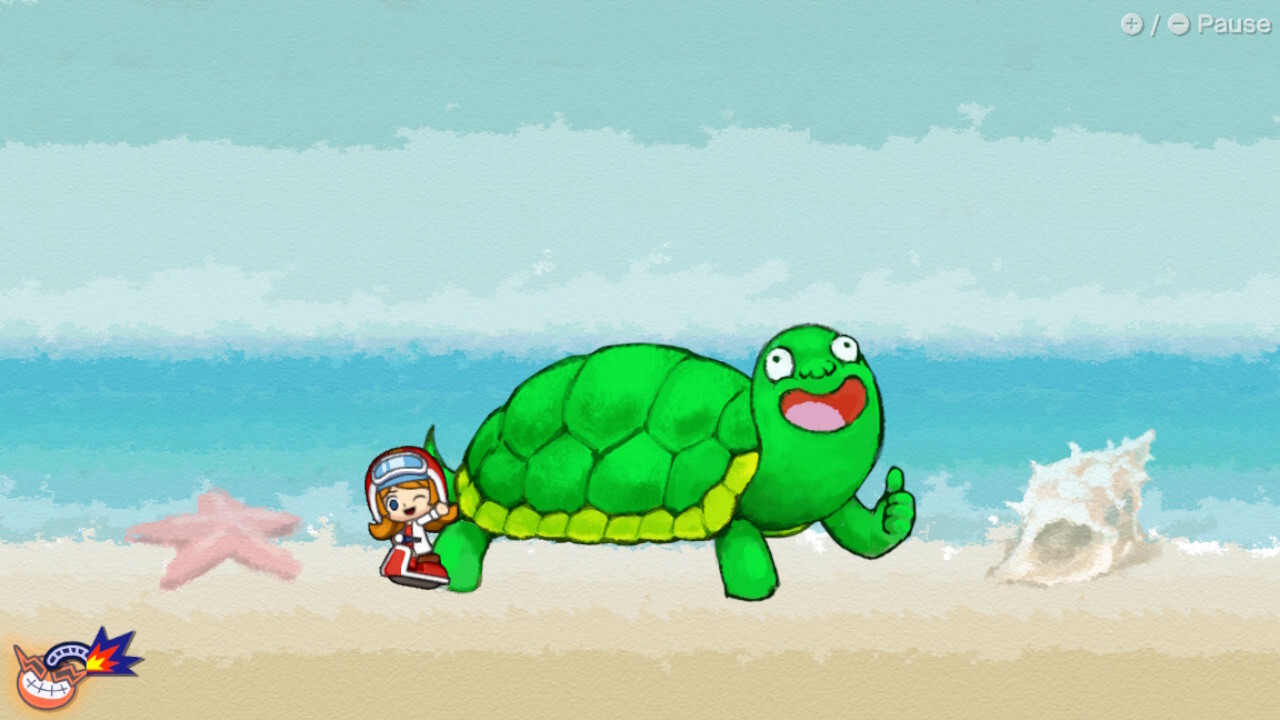 In this setup’s defense, you eventually unlock a means of playing a microgame set with the entire character roster being randomly pulled from, and in this setting those duds are on brand for WarioWare’s chaotic characteristics. So while I won’t be selecting those unsatisfying options if I don’t have to, their involvement is welcome as a bad dice roll, so to speak. It’s just a shame that in more specific or choice driven situations that they feel unequal to their fellow game devs.

It must be noted that this mode (and thus, all microgames) can be taken on with up to two players, making this the first genuine multiplayer WarioWare title. That flexibility in player count and character choice allows you to team up the likes of Ashley and Jimmy T, or even add on a few extra characters – like Dribble’s fellow cabbie Spitz being exclusive to team ups. In terms of a good time, multiplayer Warioware works wonders. I do feel that the accommodation of multiple players and the freedom of player choice has some downsides in other aspects, though, keeping the series from pushing itself in what it’s always done best.

A little awkward, and not always the fun kind

As for the microgames themselves, they do their job but I struggle to think of any real standouts. That said, WarioWare has always been less about this as individuals and more the entirety of the collection. It may be a step back from the mega compilation that was WarioWare Gold, but the series can still deliver on the weird and laugh-out-loud absurdity it’s always worn with pride.

One consistency seen is that the often one word directions of a microgame aren’t quite as clear this time around. One early game has you pressing a doorbell, with the prompt being “Ring!” – clear enough, but it takes three presses to actually clear the microgame. Combined with how certain characters aren’t always the smoothest to control, there’s a certain loss to how intuitive WarioWare has been in the past, particularly the first game’s ultra simple controls. 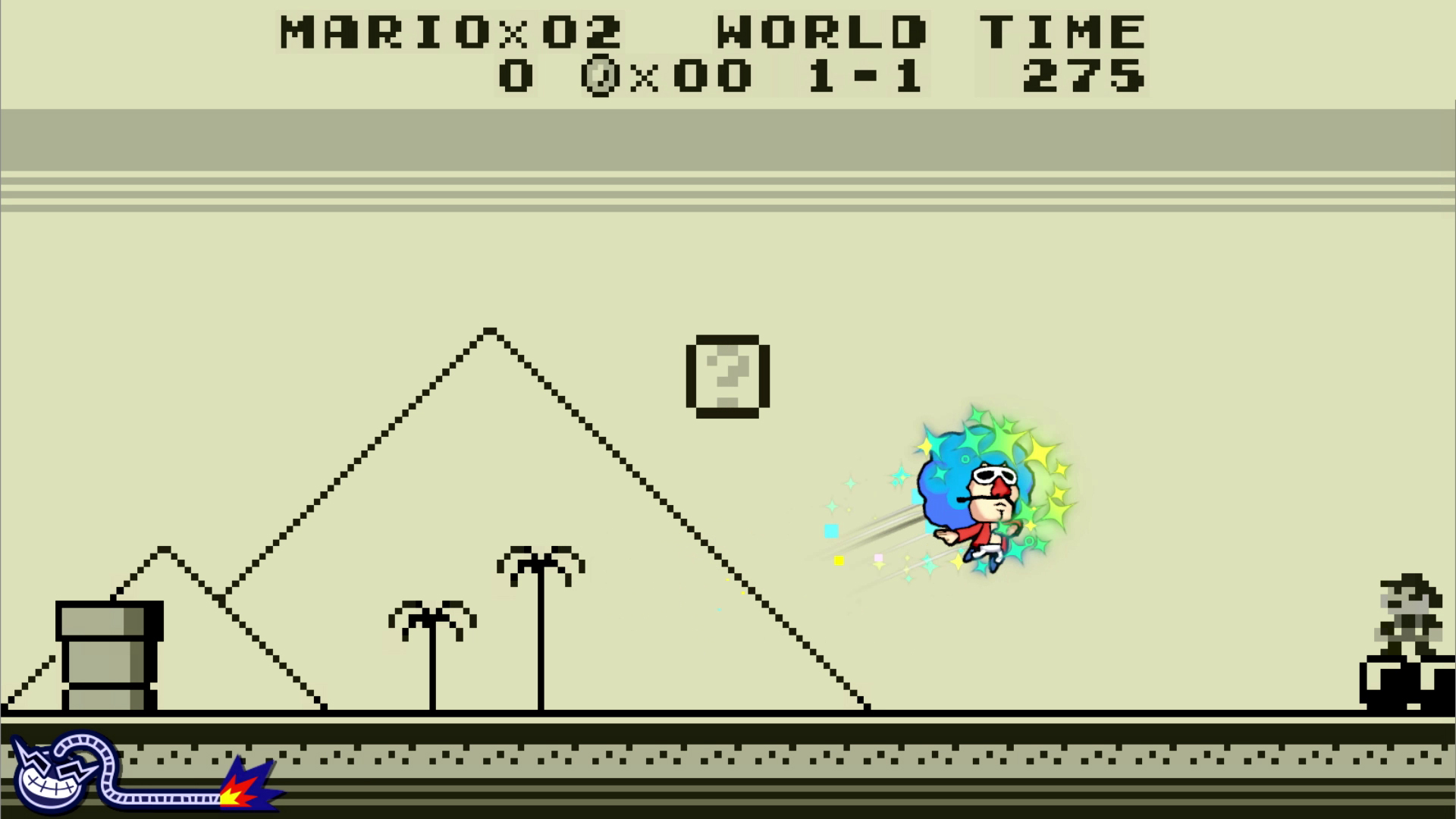 I’m sure if I dialed back my brain and tried playing Touched for the very first time again I’d have similar things to say, so it could be that I haven’t put in the work to recall these games and their conditions on the fly yet. What isn’t as excusable is the trend of boss games feeling extra long and throwing off a session’s flow consistently.

Some are enjoyable despite their length, like 9-Volt putting you through various Super Mario World stages, but others come off as time consuming or awkward depending who you’re in control of, like Orbulon’s. Credit where due, though, the game’s final boss encounter of the story is a perfect use of this game’s setup and comes with quite the reward for longtime fans at the end.

Outside those, the typical cache of extras are also included. These include the multi-multiplayer focused Variety Pack, its own subset of extra games, many of which can handle up to four players compared to the microgames’ hard cap at two. Most of these are the types of experiences that are enjoyable just for the inherent fun of messing around with your friends, further accentuated by the series’ brand of absurdity, but they couldn’t hold me as much as a round of microgames could.

There’s also the Break Room and Emporium, where you’re able to level up Wario and his employees by gifting them prezzies. This doesn’t do anything for them as far as gameplay goes, but it does offer up different color palettes for them and give you a convenient place to practice. Rather than feeling like progress or a growing collection, this portion seemed to exist to drive completionist mindsets even further, giving the game longer legs if you’re for that sort of thing. Earning prezzies is done by a timed, rotating lineup or through virtual gachapon machines in the Cluckade, bought up with earned in-game cash. Thankfully not even Wario has caught on to actual microtransactions… 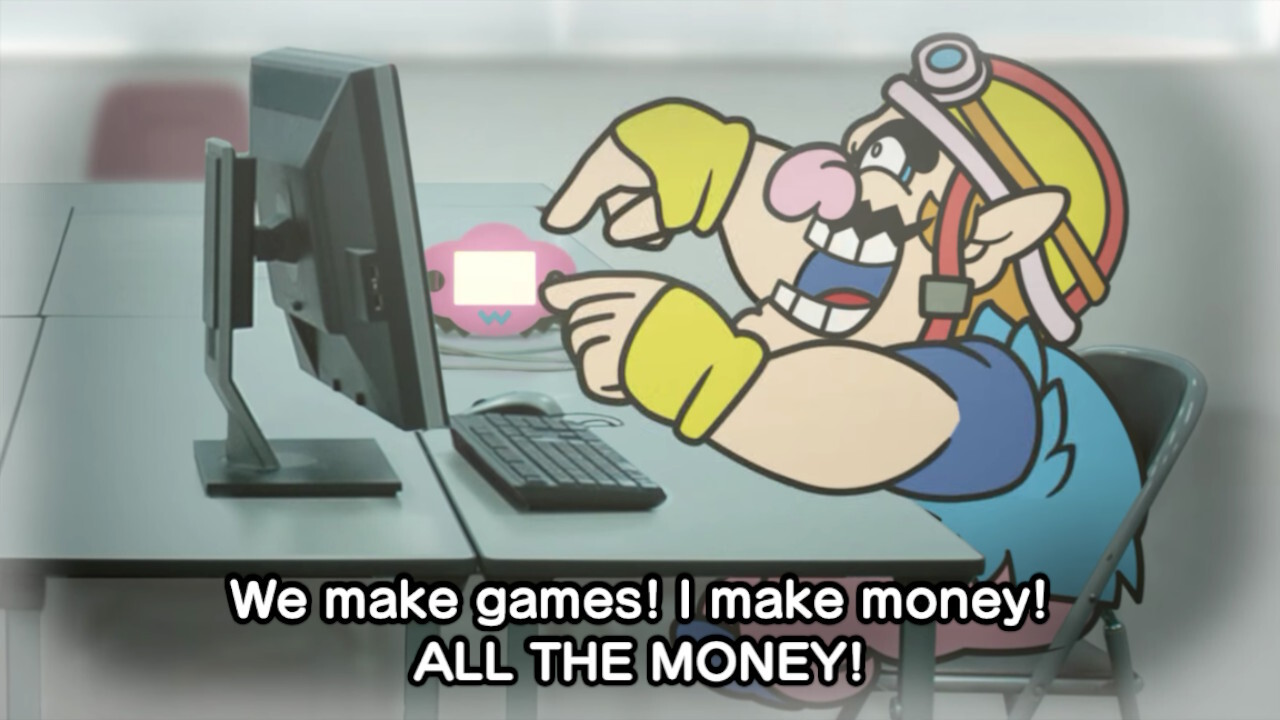 Last up is something a little more new to the formula, that being the Wario Cup. This weekly challenge mode lets you play through a preset task, scored either by time to get through a certain amount of games or by clearing as many games as possible. You can either run this on your own to earn the earlier mentioned in-game coins, or take to ranked mode and compete against the world online.

Even if I weren’t already picking up and playing Get it Together for fun on my own, Wario Cup is that perfect excuse to check and see what’s new and to get me going again. As it’s only been live for a couple weeks there’s no knowing how much longevity it’ll hold or if there’ll be a dedicated ranked scene, but for now at least it’s a nice extra incentive to round out the assortment.

For my money, WarioWare: Get It Together! works as a continuation of the series but doesn’t push it forward in a truly meaningful way. Some of the faults of the previous release are still present, leading me to think they might be here to stay with the current direction. Still, after years of experimentation and a fresher style since Gold, it’s nice to see the team’s still got it where it counts – the microgames, and the weird wonderfulness that Wario and his team can bring.