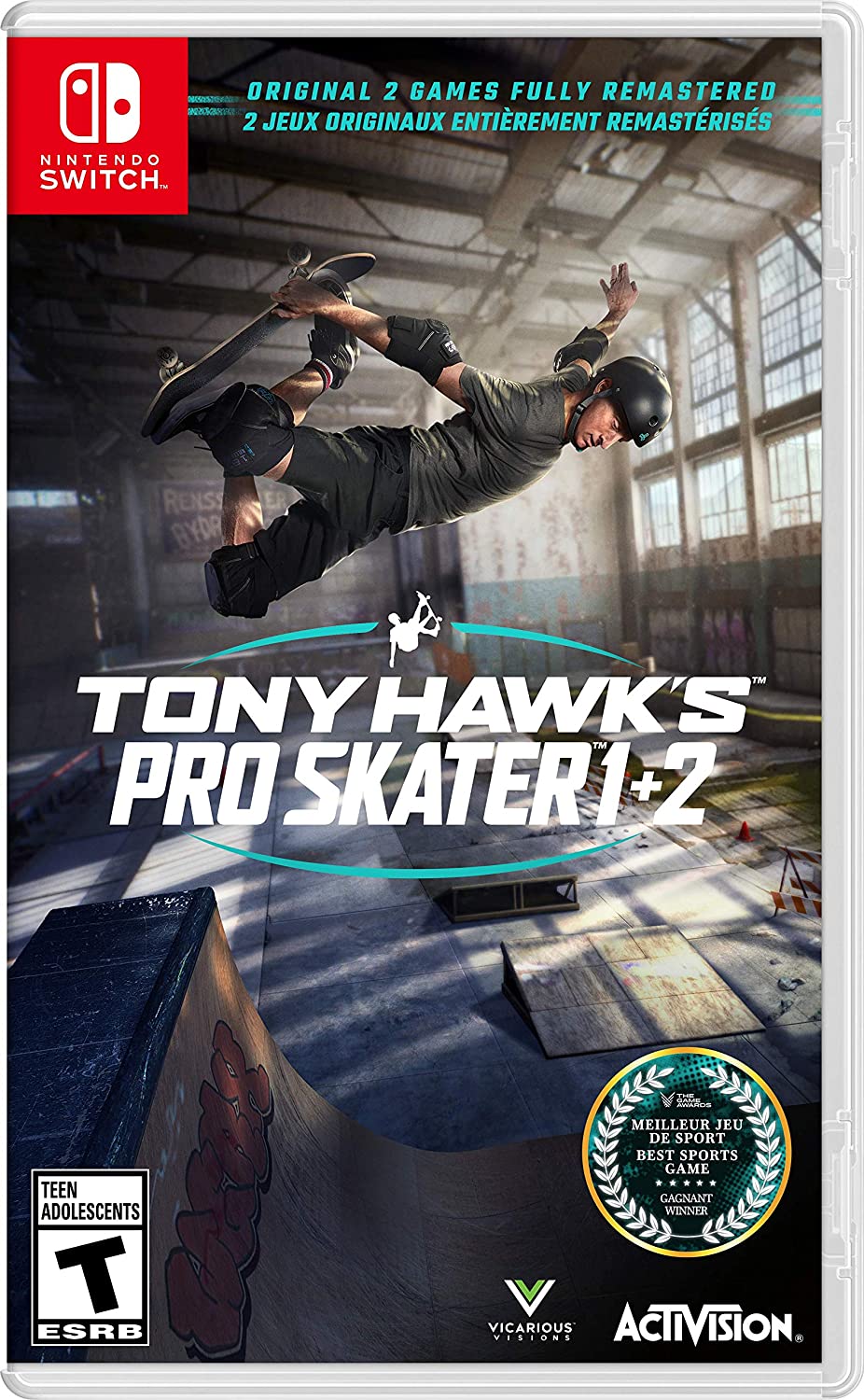 Tony Hawk’s Pro Skater 1+2 has finally landed on Nintendo Switch, something I’d hoped would happen since the game was announced. Growing up in the ’90s, whenever I was outside I usually had a skateboard in tow, and whenever I was inside I was parked in front of the TV, playing video games. The intersection of those two interests came onto the scene in 1999 with the release of Tony Hawk’s Pro Skater and its sequels, which I and apparently many others loved, with the initial entries becoming critical darlings and remaining fan favorites to this day.

20 years down the road, Vicarious Visions is capturing the nostalgia of skaters and gamers the world over with a loving recreation of the first two games in the series, with a few modern improvements.

The arcade-style gameplay of Tony Hawk’s Pro Skater 1+2 is simple enough to understand but difficult to master. You are dropped into a level, or “park,” and you have a time limit to accomplish different goals set out for you, which vary by stage. All stages share a set of challenges such as hitting all five letters of the word SKATE located throughout the course, collecting five of a stage-themed collectible, getting so many points in one combo, etc. but there are also unique challenges, usually involving doing a specific trick over a certain gap or on a specific rail. These challenges do get progressively harder as the game goes on and the difficulty ramp is very smooth, though some of the later challenges will have you working to perfect certain tricks or maneuvers over multiple runs in order to accomplish them. 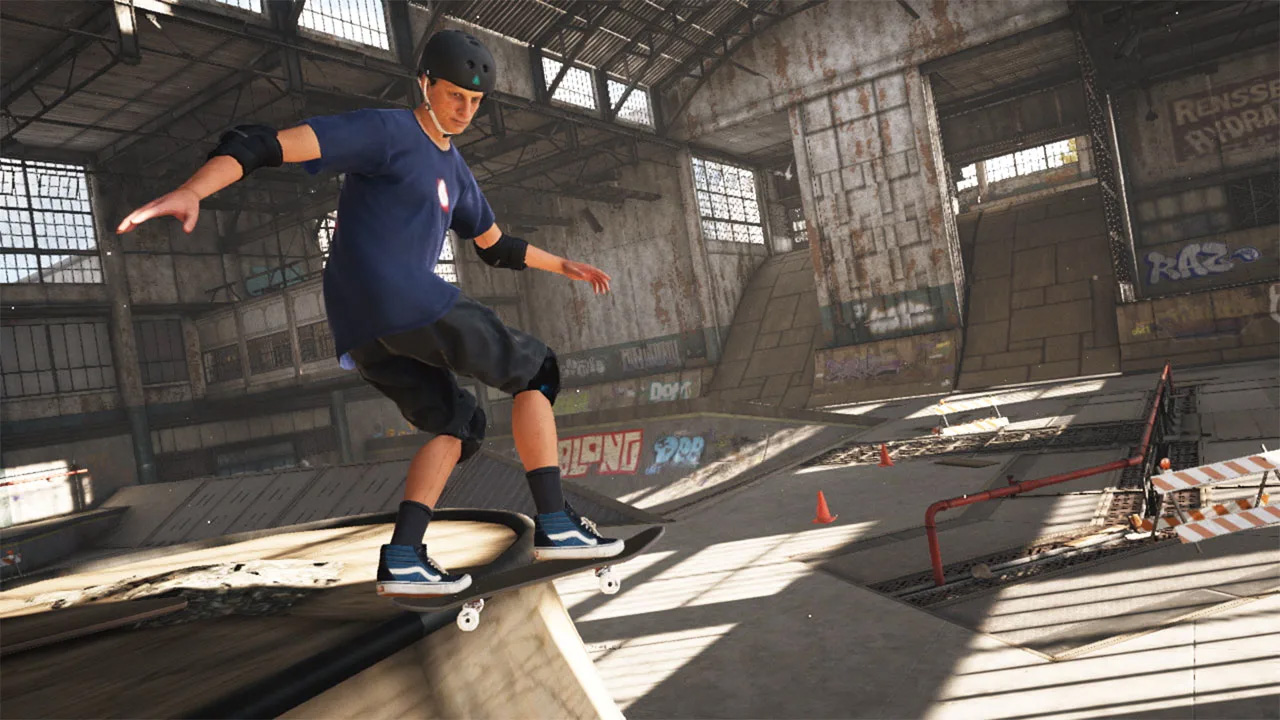 Luckily, enough of the control scheme is intact from the original games that muscle memory should kick in for veterans of the series after a few runs. The default control scheme does allow access to certain tricks and maneuvers from later in the series that weren’t possible in the original games, but you can also toggle on the control schemes from both Tony Hawk’s Pro Skater and Tony Hawk’s Pro Skater 2 if you’re feeling like having a more traditional experience. The physics of the originals are recreated to perfection here, so things like holding the balance of a manual or grind feels exactly the same as it did 20 years ago.

For those that are probably a little rusty or brand new to the Tony Hawk’s Pro Skater series, there is an excellent tutorial guided by the Birdman himself that walks you through all of the basics and several advanced moves, and gives you free reign to practice each of the skills and move on when you’re ready. There are also several tweaks you can apply to make the game a little more accessible, such as no bails, perfect grinds, and more.

As is the case with any game that is ported to Switch after releasing on other consoles, there are sacrifices that have to be made. Most traditionally, these sacrifices come when a developer has to decide between making the game look its best or run its best. In the case of Tony Hawk’s Pro Skater 1+2, the choice to have the game constantly run at a smooth 30 frames per second was made, resulting in the textures and other visuals looking a bit rough and muddy. 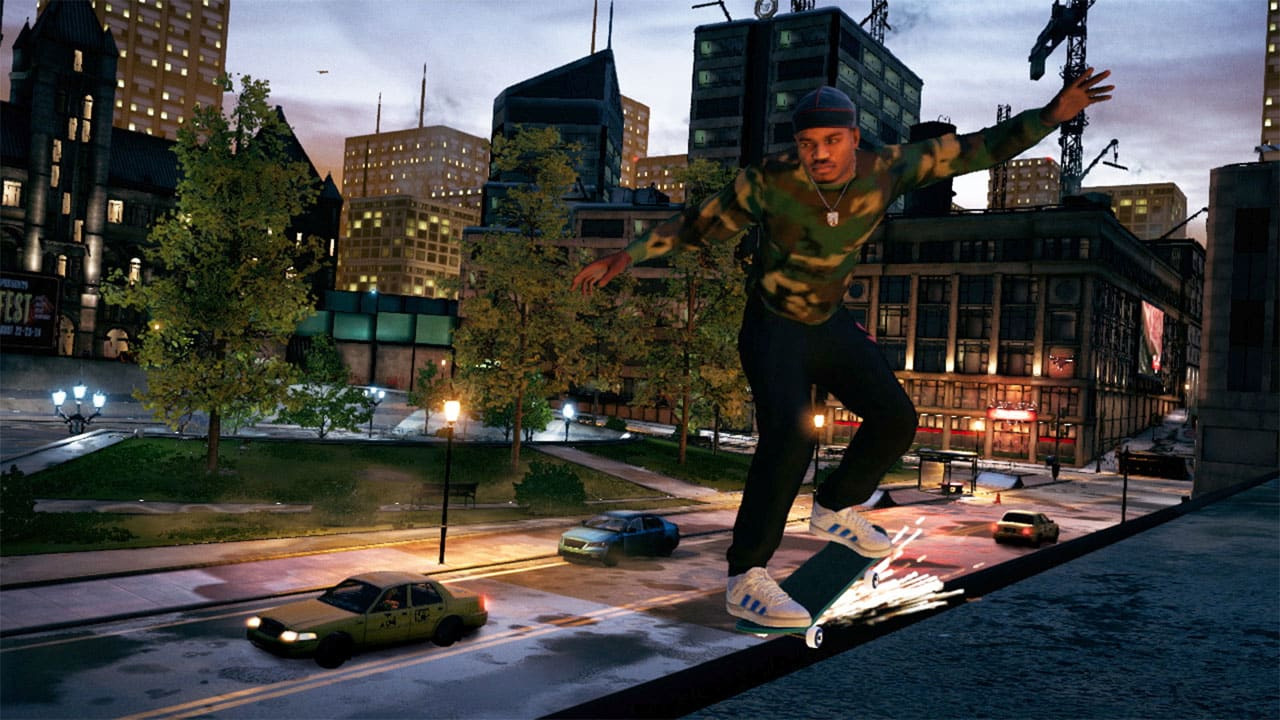 It’s not as nice to look at on Switch as it is on other consoles, but in my eyes this choice was a no-brainer, as a fast paced game that relies on combos and precise reactions just wouldn’t mesh well with any amount of stuttering. As a result of this choice the gameplay of THPS 1+2 runs like a dream on Switch, and I didn’t run into any stuttering or glitches in my time with the game this past week. I do want to stress again that things do look a little rough to compensate – the skaters especially look like they might have come out of a PS3 game rather than something from this generation of consoles.

I also want to mention that while the loading times aren’t egregiously painful, they are slightly long when the Switch is docked, and noticeably longer when undocked. My last Switch-specific nitpick also has to do with a primarily handheld option; Joy-Cons aren’t exactly the best tool for pulling off precise tricks. Even without the dreaded stick drift I couldn’t seem to find the right angles for the control sticks to hit the tricks I wanted when specific challenges requested them. When in handheld you don’t really have much of a choice outside of third-party accessories, but if you’re playing docked and you own a Pro Controller, use it.

It’s hard to talk about a Tony Hawk’s Pro Skater game without mentioning the soundtrack, and fans of the original two games shouldn’t be disappointed in what’s spinning in the background of the remake. Of course, almost all of the fan favorites are back, Goldfinger’s Superman included, though not everything made the cut, with three songs missing due to rights issues. I really appreciate the effort to bring back as much of the original soundtrack as possible, as a big part of my music taste today was influenced by the various soundtracks of this series. There are 37 additional tracks new to the series as well, all of which fit pretty well into the existing soundtrack, though I could have done without Machine Gun Kelly’s attempt to imitate Blink-182.

I love the soundtrack of this game, though even I can tell that after a few hours of continuous playing there will be songs that get on your nerves. Luckily, it’s easy to pop into the sound options and remove those songs from the playlist in order to curate the exact vibe you want to skate with. 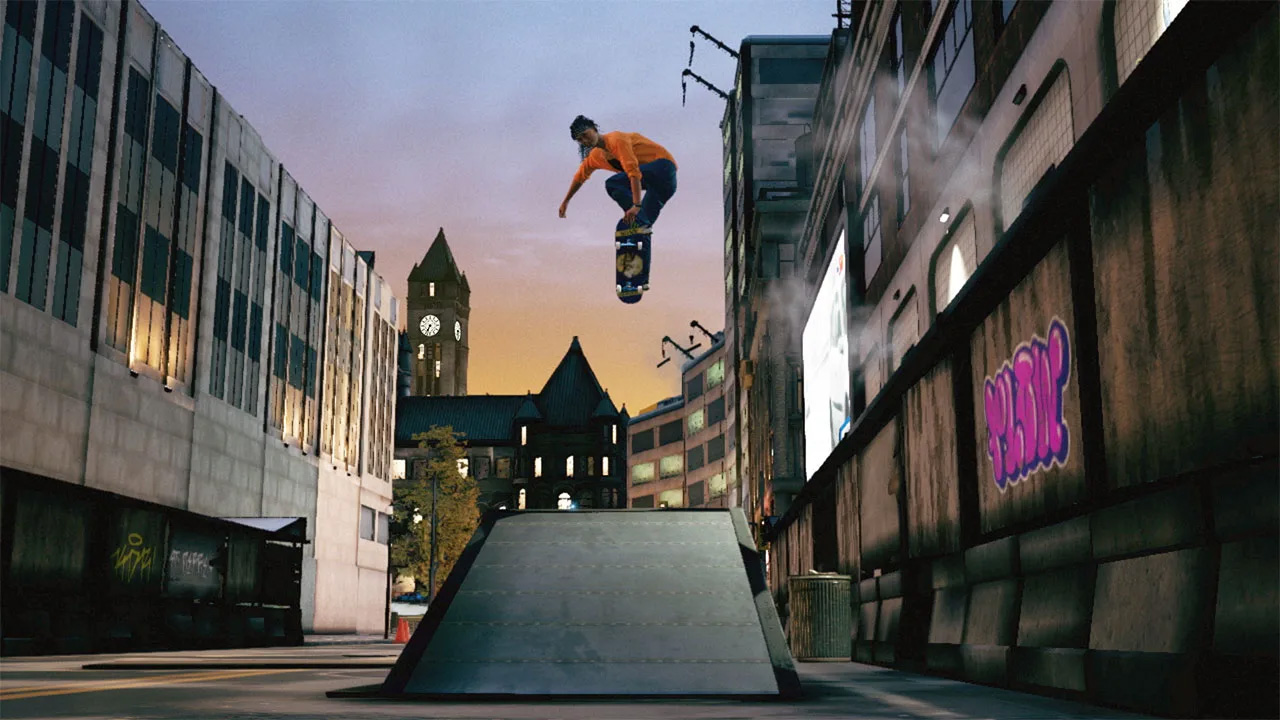 Speaking of things returning from the original games being enhanced by new additions, the selection of pro skaters to play as has improved as well. All of the skaters from the original games have returned, albeit as their current selves, rather than what they looked like in 1999. There are several new skaters as well, with eight current pros rounding out the base roster. I appreciate the special attention that was paid to diversity when this roster was put together, with the inclusion of four times as many female skateboarders as the original game, the non-binary Leo Baker, and skaters of all different ethnicities and sexual orientations. Skateboarding is an inclusive community, and I loved to see that reflected in Tony Hawk’s Pro Skater 1+2.

Of course, it wouldn’t be a Tony Hawk’s Pro Skater game without outlandish unlockable characters as well, with three total original characters to skate as in addition to the base roster: The Jack Black-portrayed Officer Dick and an alien straight out of Roswell are both unlockable skaters, while skate company Powell-Peralta’s mascot The Ripper is a character exclusive to the digital deluxe version of Tony Hawk’s Pro Skater 1+2. Sadly, Spider-Man couldn’t make an appearance this time around, due to licensing issues. 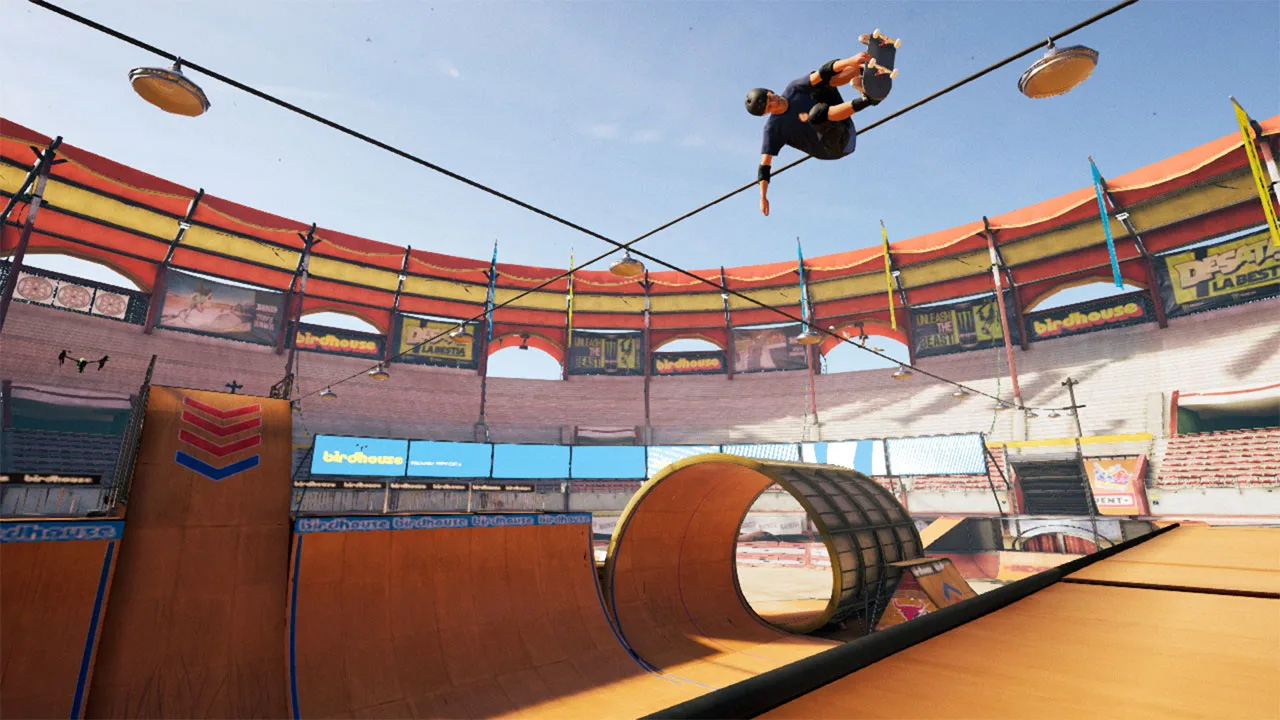 As far as remakes go, Tony Hawk’s Pro Skater 1+2 absolutely hits the mark with what it was trying to accomplish. The controls are tight and a great evolution of past games, and it plays incredibly smoothly thanks to some sacrifices made on the visual front. Sure, it’ll look better on other consoles, but the Switch is the only console you’ll be able to actually bring to the skatepark with you. The soundtrack still bangs, even with the new additions, and the roster’s attention to inclusivity with its additions is a welcome change.

Overall, Tony Hawk’s Pro Skater 1+2 is a huge step forward for the franchise, but only time will tell if it goes anywhere from here, thanks to Activision-Blizzard’s merging of Vicarious Visions into Blizzard. At the very least, we have this tightly-honed dose of nostalgia to keep us busy with trying to nail those combos.