As we all head towards the coldest time of the year so too does Galar look a bit more chilly, at least for those trainers who’ve purchased the Pokémon Sword and Shield Expansion Pass. Featuring more species to fill your Dex with, new ways to Max Raid, and plenty of legendary encounters; The Crown Tundra compliments its predecessor well and gives fans even more to do in Gen VIII.

So far as generalities go, much of what you’re getting in this Expansion is similar to what was offered with the pass’s first half. As such I suggest reading my Isle of Armor review, and even our original Pokémon Sword and Shield review, to get the full picture. The following will be focused primarily on the Crown Tundra, while also featuring some thoughts on the Expansion Pass (and it as a model) as a whole. With that out of the way, let’s get this new adventure under way!

Crown Tundra’s story is cleanly broken up into three parts, each concerning a different group of legendary Pokémon. Once you arrive in Galar’s frigid south, you’ll meet the extra-vivacious Peony who’ll give you the info that you need to get exploring, battling, and catching in the name of these rarities. As an over-eager dad, Peony works well, though he feels underutilized compared to the Isle of Armor’s new NPCs.

While you can take these on in any particular order, the main and most involved concerns Calyrex. As the mascot of this expansion it stands out from Isle of Armor’s Kubfu as a powerful but forgotten ruler of the region. Rare for Pokemon outside of the anime, it actually gets a lot of characterization and even (psychic) dialogue and manages to make an impression. 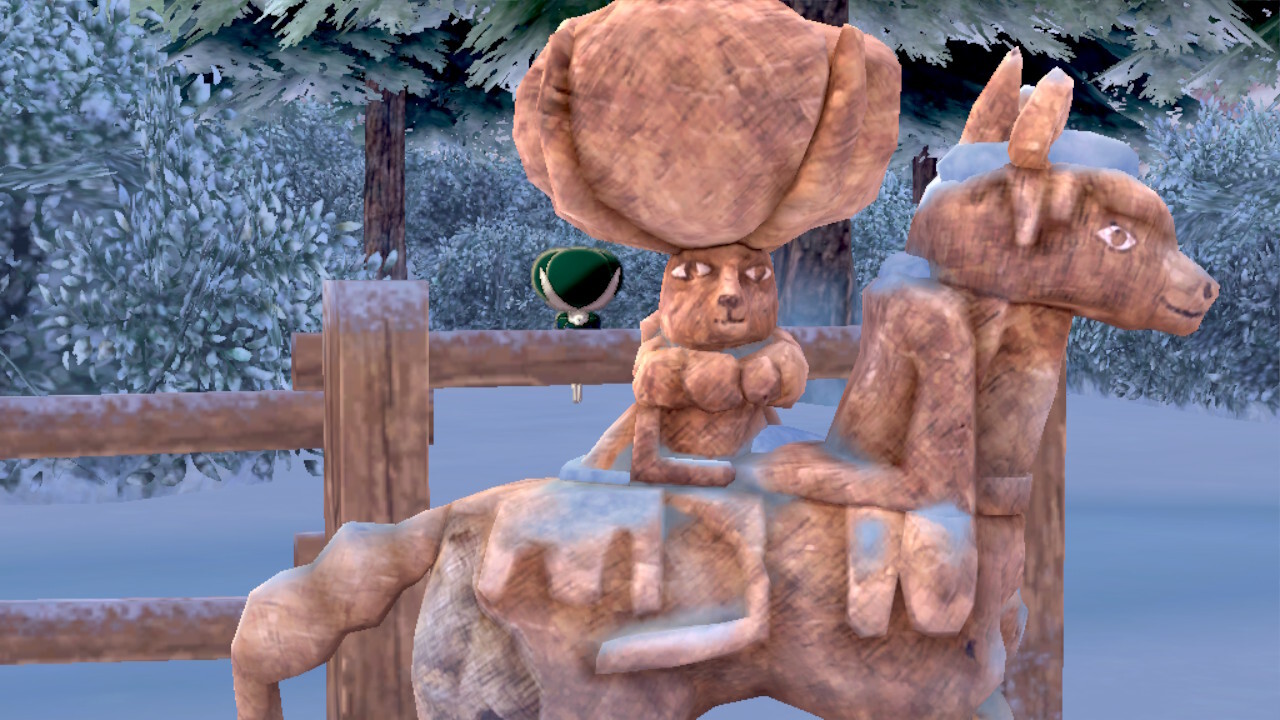 Its questline is fairly involved, but boils down to roaming around to various spots in the Tundra when prompted. This makes it the least exploratory by design, but it does necessitate you make your way through quite a bit of the Wild Area style map.

I found this map less varied than the Isle of Armor’s, both in terms of the environments and the Pokemon you could find (hope you like Ice types), and thus it’s somewhat less clear to navigate by design, but it serves its purpose well with multiple, notable set pieces for its legendaries.

The other main quest lines of the Crown Tundra are less involved but aim to capture “exploration” as a theme better. One has you encountering Galar’s version of Kanto’s legendary bird trio. Articuno, Zapdos, and Moltres each fly off to a different map of Galar as a whole, setting you out to find them across the core region, the Isle of Armor, and the Crown Tundra. You’re thankfully able to capture all three, though upon doing so it can feel somewhat underwhelming. There was no real resolution or capstone, though I do enjoy the three’s new designs and typing. 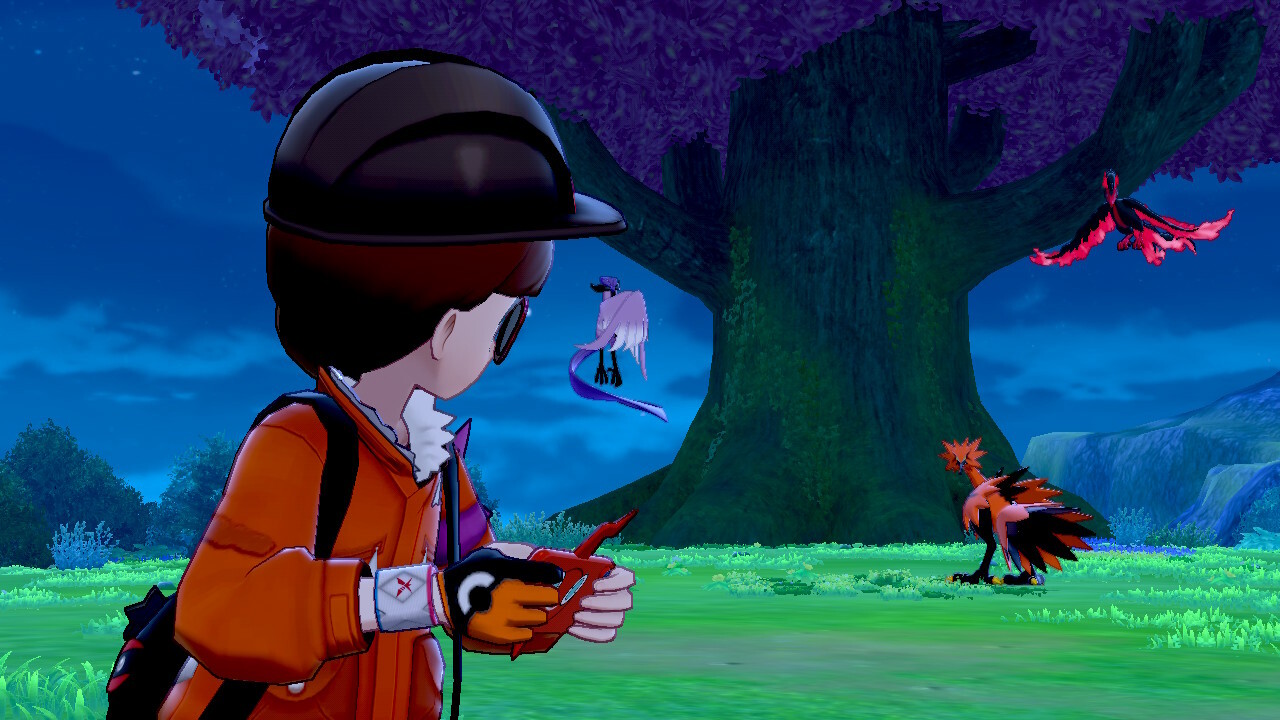 The other side plot has you heading to multiple shrines in order to capture the Regi- Pokemon. This requires players to solve a few riddles if they want to gather up all of them and visit their shrines. Once you’ve gathered up the main trio (sorry Regigigas) you gain access to new members Regieleki and Regidrago, though you’re only able to capture one of these new Pokemon.

That limitation extends to an aspect of Calyrex’s quest I won’t spoil as well, and as was the case with Urshifu’s form last time I dislike only having access to one, but appreciate being able to choose. Version exclusives and choice have always been a part of Pokémon to foster trading and communication, though it does twist the knife further for solo players, who’ll need both versions and both expansion passes to get and keep everything you can.

From far away shores

This narrow focus, on capturing these (and a few other returning legendaries you can find after a lesser sidequest with Sonia) makes the Crown Tundra feel less involved (or at least thematically resonant) from the Isle of Armor. That expansion was tied to raising and bonding with Kubfu, culminating in its evolution to Urshifu, and called to mind the kind of connection forged with your partner in the Let’s Go! games. Here it’s most centered on Calyrex’s return to prominence, which loses some of that teamwork aspect, and encountering legendaries.

I’d go so far to say that the Isle of Armor is best played midway through Pokemon Sword and Shield while the Crown Tundra should be saved for after the end. This frosty expansion reminds me of previous Pokemon post-games, particularly Sinnoh’s, and gives it an epilogue sort of feel. Take that for what you will, but if I had to choose one expansion over the other based purely on the story and location, I’d likely go Isle of Armor. Mind you that’s not a choice that need be made since the two come together, but I stand by it. 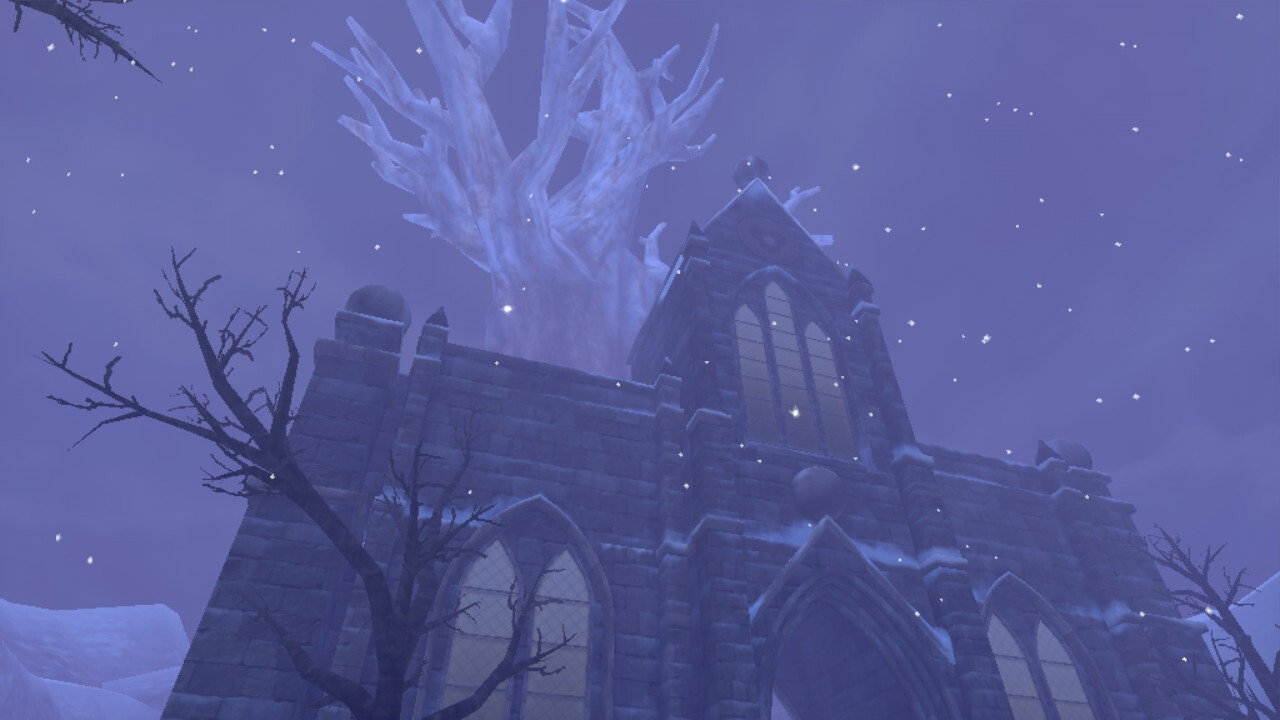 Where Crown Tundra really finds its worth though is in other gameplay aspects that are included. Though they’re introduced quickly before being brushed aside, Dynamax Adventures give Max Raids an extra push that made them more enjoyable to me.

Rather than a single, souped up Pokemon battle these play out as a series of encounters. You start by choosing a rental Pokemon, but after each Raid in an Adventure you can choose to swap your rental out for the one you just defeated, and then select a pathway based on typing. At the end of the raid you can select one of your catches to keep permanently, with the big prize being a whole suite of returning legendaries from every previous Pokemon generation.

While this does somewhat devalue the inherent nature of these former forces of nature and untamable psychic titans, I’ll take enjoyable gameplay over a slow roll out of Mystery Gifts any day. With a like-minded group of players it puts you at Raid battles quick and easy and, at least for now while they’re fresh, feel more involved.

So long for now, Galar

The other, and final, piece of The Crown Tundra experience is the Galarian Star Tournament. Once you’ve completed the three core questlines (and another objective unlocked after those if you’re already champion) you’ll be invited back to Wyndon Stadium. There Leon will reveal his grand design for a new competition featuring the most prominent trainers in Galar.

This translates to a similar event as the Champion Cup, though instead of one-on-one battles you’ll be choosing a partner. These include gym leaders, rivals, and even most of the Expansion Pass NPCs who will fight alongside you through a series of Multi Battles. With how well received Galar’s characters have been it’s nice to be able to get them all together like this and spend a little more time with them. 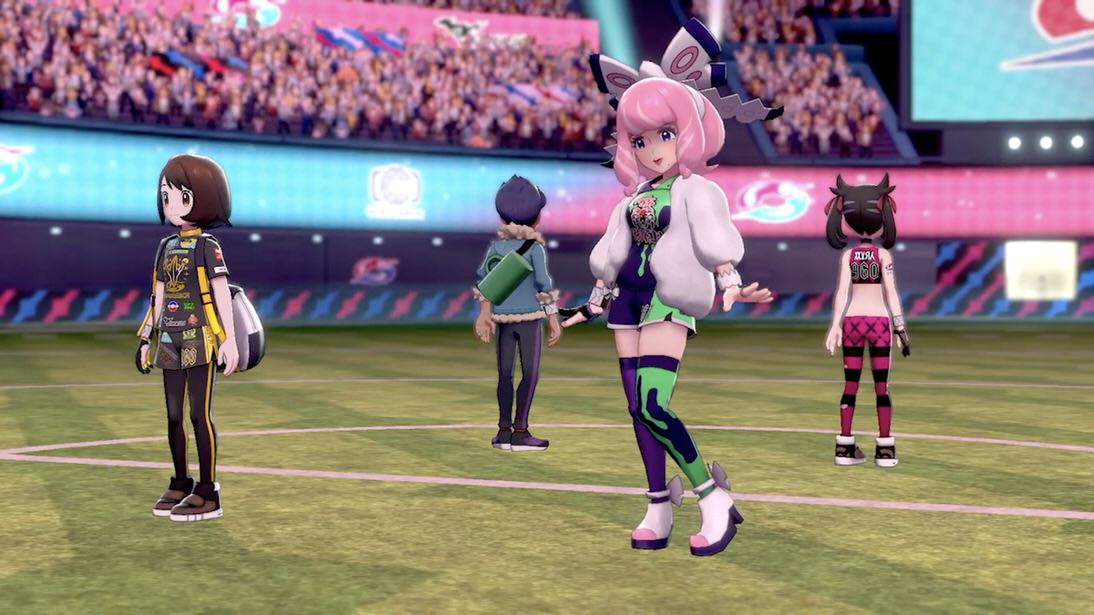 Ultimately though the Galarian Star Tournament feels most extraneous of this Expansion Pass’ additions. It’s a fun extra but doesn’t exactly “do” anything with its characters, though for anyone who stans a particular gym leader (or wants to gather up money and items) it’s sure to be a good time.

So now that the Pokémon Sword and Shield Expansion Pass is complete, we can look at Galar as a whole. Ultimately, this DLC doesn’t carry the kind of weight an Emerald or Platinum version did by remixing a whole region, but it does compliment the experience of the base game by highlighting some of Pokemon’s core ideas. Unfortunately I’m in no position to say how they’d feel if taken on mid-journey, but as a post game both Isle of Armor and Crown Tundra had their strengths.

If you absolutely love Pokémon and want to explore other Wild Areas and access more species on Switch (rather than via Pokémon Home), then the expansions are a must-have to further your Pokédex. But ultimately I do think the strongest aspects of Gen VIII are all present in the base game, so save their exclusive legendaries you really aren’t missing much with the Expansion Pass.

That said I’m glad I hopped a train to both of these satellite environments, and that they tried something new with DLC rather than another packaged ‘version’. There’s nothing stopping the Pokémon Company and Nintendo from releasing a Sword 2 and Shield 2, or even a second Expansion Pass, but for now we can close the book on Galar and wonder what comes next in the World of Pokémon.