“Style over substance” is a common turn of phrase across multiple fields of criticism, punchy and powerful in how it can immediately declare a work to be fluffy and vacuous beneath its flashy veneer. I don’t like the term much myself, mostly because its users tend to either use it as a molotov when they can’t actually grasp whatever substance is actually present in a work, or fail to recognize that in certain cases, style IS substance – glitz and glamour can be just as fulfilling as concepts and completion.

The latter of those points might be how I’d describe The Artful Escape, a short, Campbellian tale from the excellently named studio Beethoven + Dinosaur. True to the very medium and genre it takes its inspiration from – space rock – to form a galactic symphony of shapes and sounds, weaving a tapestry of psychedelic potentialities: all in service of a story whose abnormality only lies in how normal it all is. 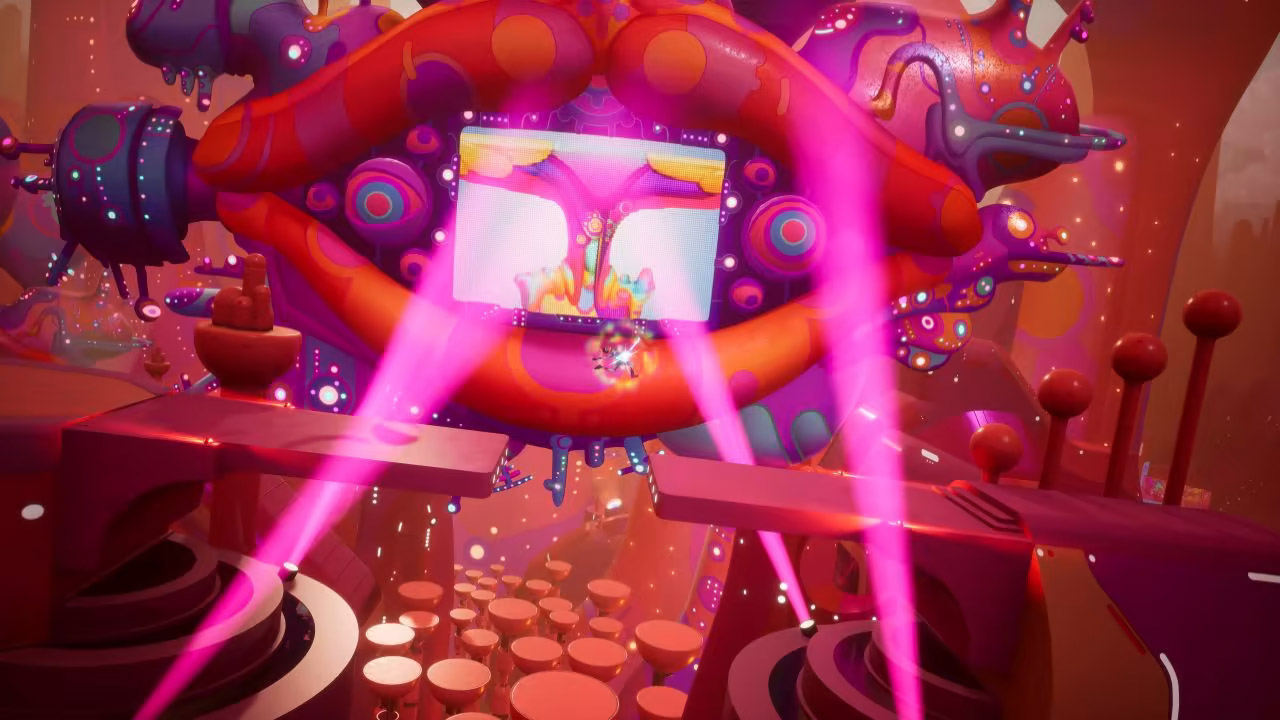 The game follows nervous teen Francis Vendetti, nephew of famed folk singer Johnson Vendetti (whose look and sound are clearly based on Bob Dylan). While the rootsy folk of his small Colorado town imagine Francis following in his uncle’s footsteps, Francis doesn’t want to strum a three-chord tune about a miner’s life – he wants to shred. And the night before he’s set to debut in his uncle’s shadow, he’s whisked away on a cosmic extravaganza by a mysterious rocker named Lightman, as Francis adopts a planetary persona to jam the stars away with.

And jam away, he does. Much of the game is side scrolling platforming so simple that I hesitate to even call it that, Francis traipsing through the soundscape as he wails on his starry six-string. While mechanically simpler than a game of Tic Tac Toe, I would be lying if I said the experience was anything less than enthralling: alien landscapes stretch on in multitudinous forms beyond human description, bursting and bubbling as bright ambiance is punctured by the distorted scream of a guitar solo that never ends, punctuated by just enough variety and actions that it never feels like a repeat riff. While the Switch port is a tad rough around the edges, like the psychedelica it pays homage to, the sights and sounds of The Artful Escape are best experienced when they wash over you with little resistance, simply taking it in and accepting the gnarly coolness for the trip that it is. 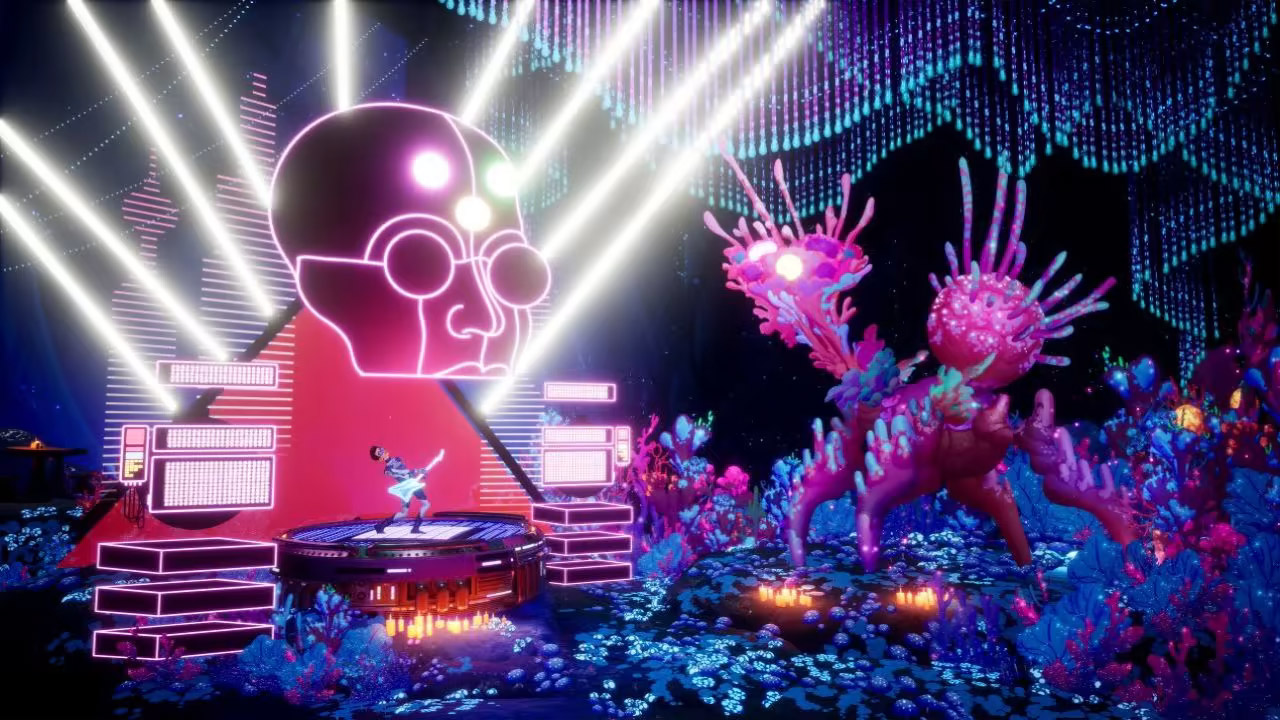 With these sorts of narrative-focused experiences it’s pretty easy to criticize gameplay for being shallow or trite, but the game flavors add just enough variety to satiate. The rocking traversal segments have two alternatives – more focused jam sessions where you play certain riffs with button cues (elaborate games of Simon, essentially), and exploration of a smaller area with NPCs to talk to. The former is more engaging than the latter, what with the laser light shows and ravenous riffage, but even the chatty town segments can help the game’s pacing, which is remarkably controlled and well thought-out. In fact, the entire story is tightly controlled.

In most cases, that would be a great thing. But here it leaves the story strangely dissonant with itself, a banal bildungsroman for what should be an operatic odyssey. Francis’ journey is stated to be one of overcoming expectations – surpassing people’s preheld conceptions of who he should be to become a being of the beyond, a Ziggy Stardust born from the sticks – but somehow the story never manages to surpass the expectations it sets for itself. In the first five minutes you pretty much know the kind of story it’s going to tell, and it never strays far from that gut feeling. 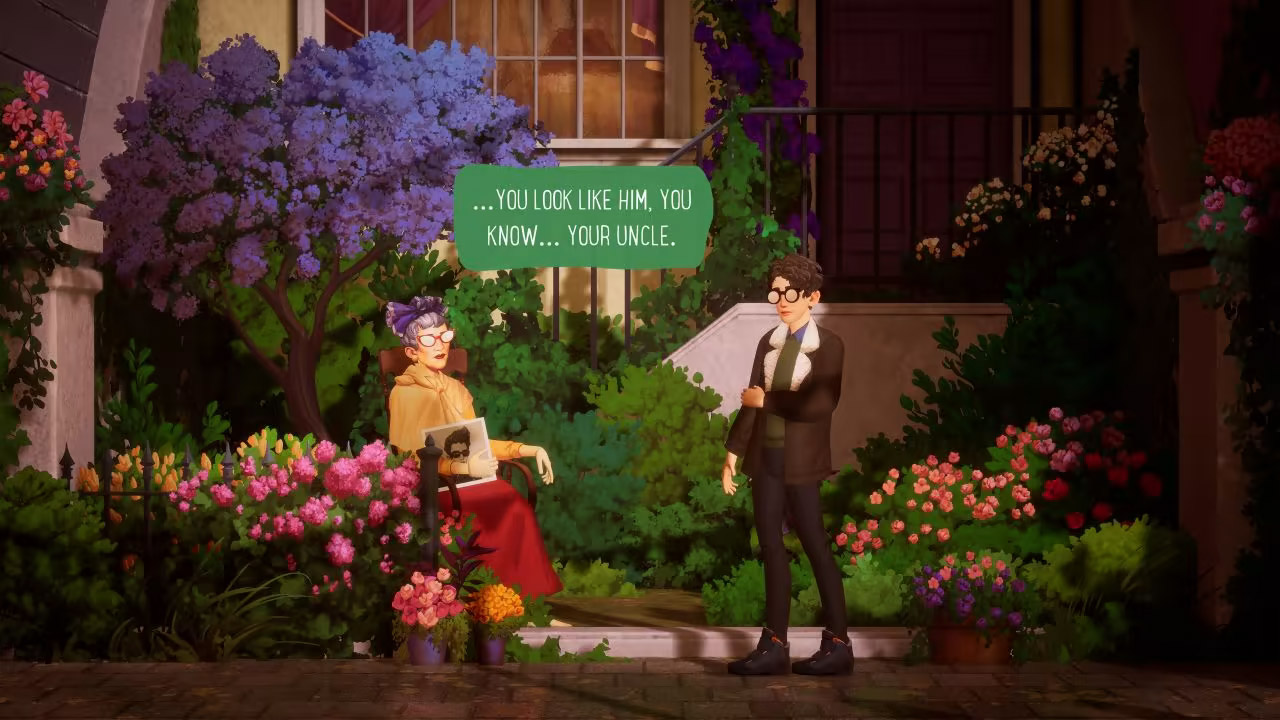 Now, there’s a difference between being classic and being cliche, and I’m not always looking for a truly revolutionary story. But when it’s the core theme of your entire piece, it feels more than a touch ironic that most plot beats felt not only straightforward but also pretty standard, Monomythic even. I can’t think of many works that make me wish they were less comprehensible, less easy to grasp – but for a game that so eagerly adopts the dressings of abstraction, why doesn’t it dare to actually be just that? When I sit listening to the likes of Maggot Brain or Voodoo Child (Slight Return), I’m able to transcend conscious thought and simply vibe to the soundwave of an axe long-strummed. But The Artful Escape is strangely concrete.

Compounding the issues are the cast, which isn’t necessarily bad, but is often more remembered for their quirky designs than sense of presence or character. This is exacerbated by the voice acting done by big ticket actors, ironically one of the game’s selling points – while some performances are undoubtedly fantastic (such as the inimitable Carl Weathers as Lightman, soundy simultaneously fresh and weathered), others are uneven from line to line, displaying a fairly typical result when “real” actors are brought in to do voice acting: their talents from live-action simply don’t translate as well to animation sometimes. Francis himself is unfortunately most victim to this inconsistency, due to both his high number of lines and dialogue choices.

And said dialogue choices are fun! Funny! The game’s line to line writing honestly suits itself very well, occasionally devolving into sheer nonsense for the fun or profundity of it. Slowly fleshing out the backstory of Francis’ rockstar persona is engaging, and the continued callbacks to details established early on is charming. Other little bits, like the game’s overall paper doll art direction, how everybody wears glasses, the sheer scale of it all – it’s far from some stodgy art piece about depression or futility. But it feels firmly grounded in narrative when it should be starbound. 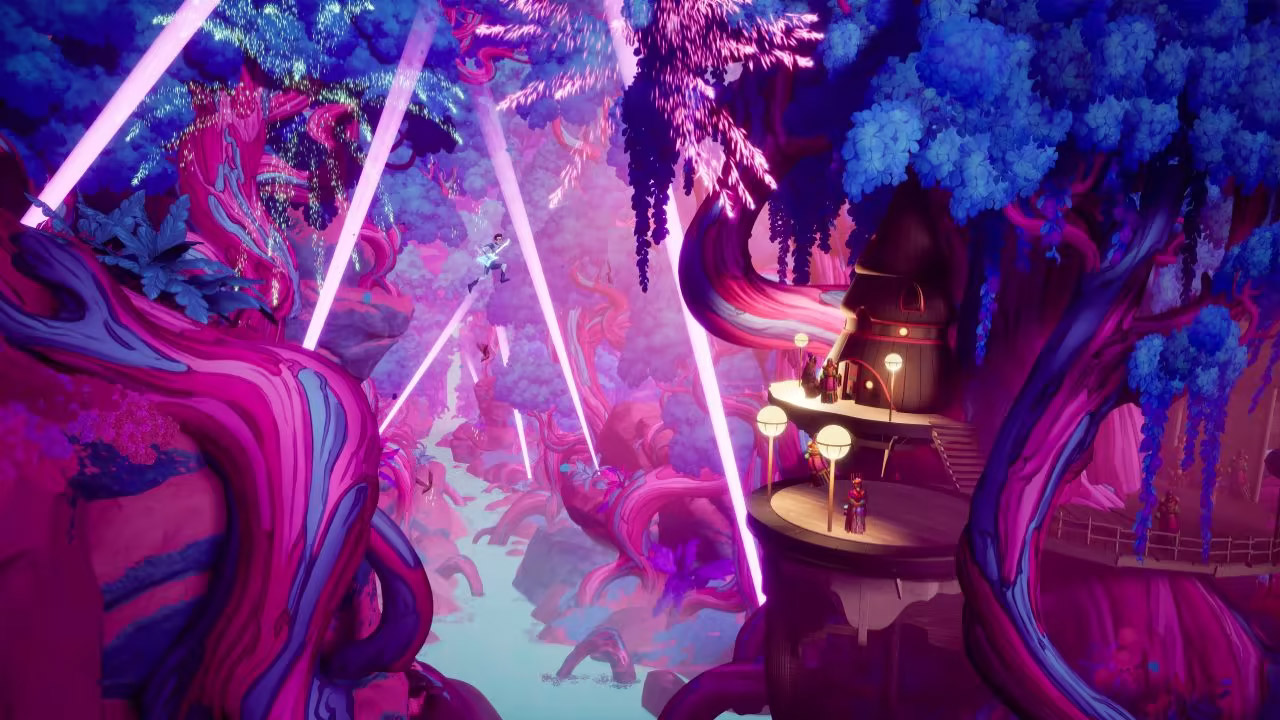 In 1968, Jimi Hendrix covered Bob Dylan’s All Along The Watchtower, turning the rustic ballad into a blaring bonfire and becoming one of the most iconic “covers that surpass the originals” of all time. In many ways, The Artful Escape wants to remember the revolution of that sound, how it shaped a generation. But that was well over fifty years ago now. What was once daring is now dad rock. Much like a Pink Floyd laser light show at your local planetarium, The Artful Escape can razzle and dazzle, but you probably won’t remember it too long after the fact. 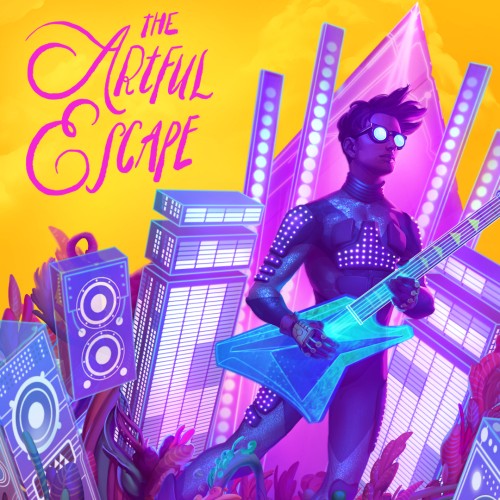