Splatoon has quickly become a mainstay Nintendo franchise over the last several years, so no one was surprised when Splatoon 3 was announced early last year. A follow up to Splatoon 2 and it’s excellent Octo Expansion DLC, Splatoon 3 continues to usher the franchise to stylish new heights by further refining the formula with just a bit more flair.

Still a Kid, Still a Squid

In the big picture, not much has changed about Splatoon’s basics. You’re still a kid, you’re still a squid (or octopus), you still get ink everywhere, yada yada yada. What has changed are a few smaller details – new customization options, a new mini-game, and even a couple new movement options. All your favorite online multiplayer modes are still here: standard matches are always a Turf War where you’ll compete to ink the most space, while ranked matches – now known Anarchy Battles – can be one of four match types you’ll recognize from earlier titles, Splat Zones, Tower Control, Rainmaker, and Clam Blitz. 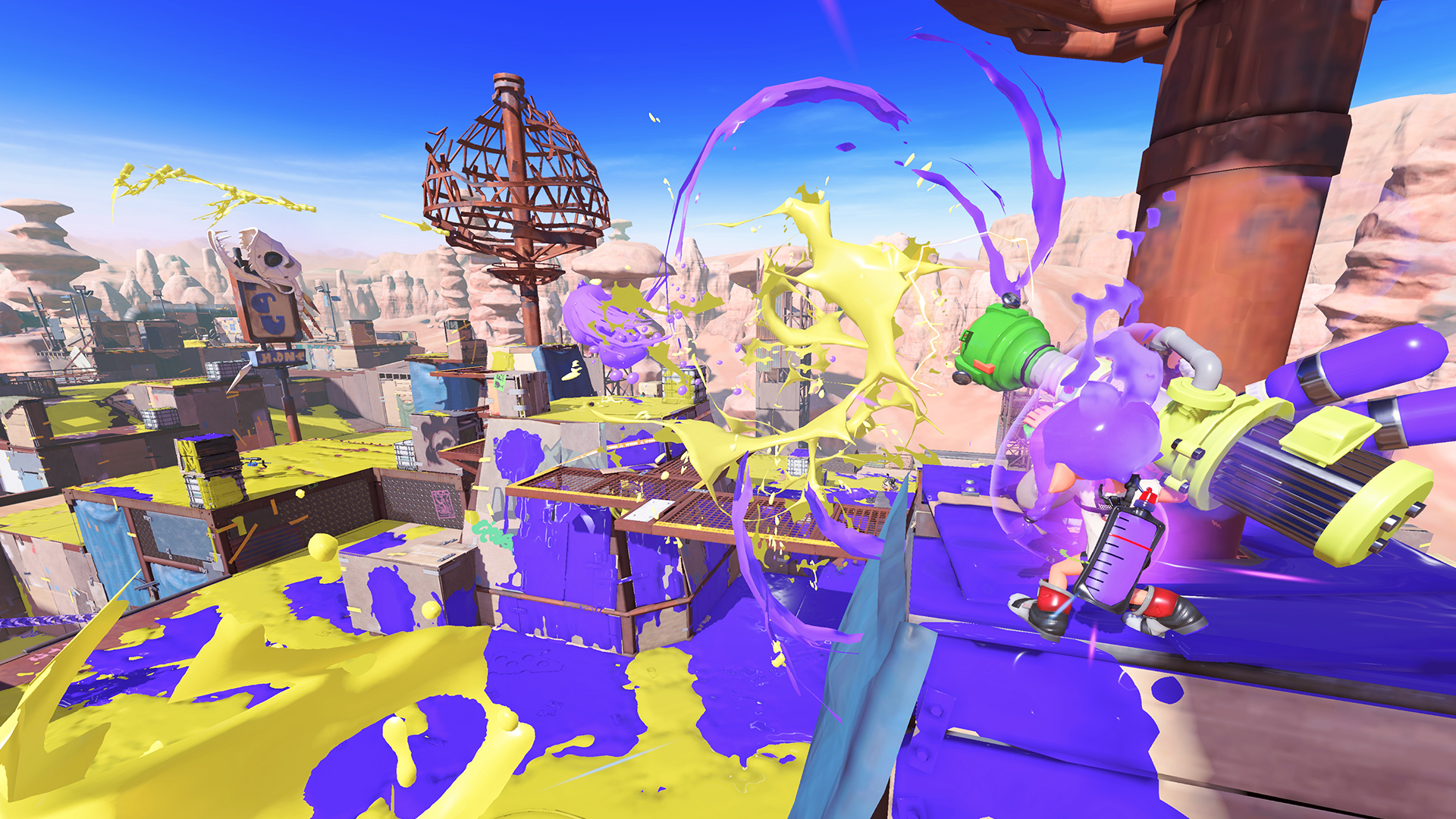 Anarchy Battles work a little differently than the ranked modes of past Splatoon titles. For starters, you only have one rank now, rather than separate ranks for each match type. There are two options for joining Anarchy Battles, Series and Open. In a Series Battle, you’ll spend part of your rank points to enter, and then you’ll compete to win five matches before you can lose three, and once your series is over, your points will be calculated based not only on your number of wins or losses, but also based on how well you performed in those matches. An Open Battle just sticks you in one match, and if you win, you’ll gain rank points, if you’re defeated, you’ll lose some. Both Series and Open Battles are on separate match type schedules, making it easier to play a mode you’re really excited about or avoid a mode you’re not too confident in if you want to protect your rank. These are changes that I welcome wholeheartedly, because it allows for a more enjoyable and controllable ranked experience without sacrificing any of the fun of these match types.

Online multiplayer also features a brand new lobby chock full of targets and different terrain types that you can use to practice in while waiting for matches to start, which is a very welcome addition, since I don’t just have to sit around staring at a static menu waiting for a match to start. Salmon Run also features a similar, but smaller lobby, and that’s not the only change for Splatoon 3’s iteration of Salmon Run.

Salmon Run, now available 24/7, will have you hunting Salmonids for their eggs while in the employ of the mysterious Mr. Grizz. Teams of four head out to Salmon Run-exclusive stages for three waves of Golden Egg collecting; the more you collect, the better the compensation you’ll receive at the end of a mission. Salmon Run, not to be outdone by the changes to multiplayer matches, is home to some brand new Boss Salmonids, maps, and mechanics, all of which are welcome additions to an already pretty stellar game mode. Players can now toss Golden Eggs at the expense of some stored ink, allowing for new assists and combos to bring their total egg counts higher. 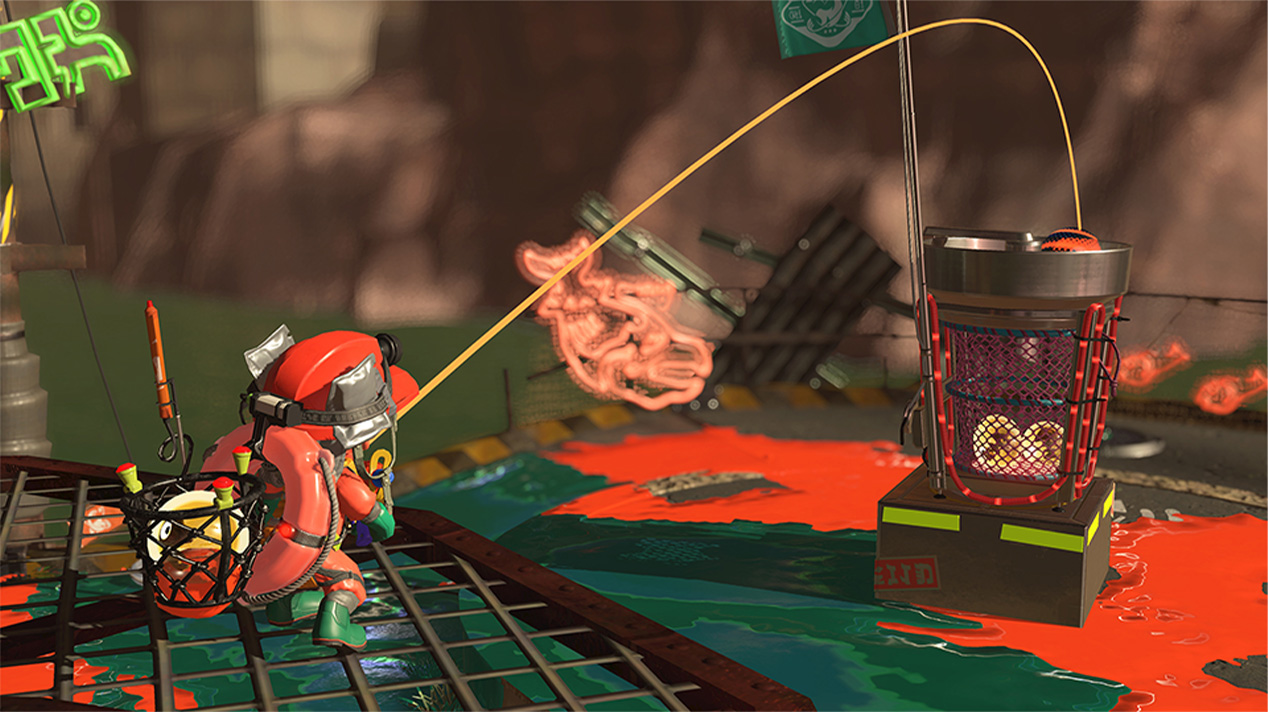 This new Salmon Run also features the addition of an “Xtra Wave” that triggers periodically, where the end of your hunt will be invaded by a Salmonid-turned-kaiju known Cohozuna, the King Salmonid. Cohozuna is massive, and will be hard to defeat with your normal weapons, which is why Mr. Grizz will grant you access to your very own Egg Cannon, allowing you to shoot Golden Eggs directly at Cohozuna to do more damage. I have yet to defeat Cohozuna myself, but doing battle with him will reward you with Fish Scales, which can be traded for Salmon Run-themed customization items. The new and improved Salmon Run might honestly be my favorite part of Splatoon 3 thanks to these changes and 24/7 availability, and is definitely the online mode I’ve spent the most time in so far, dwarfed only by my offline time in Splatoon 3’s story mode, Return of the Mammalians.

Splatoon 3’s single player campaign, Return of the Mammalians is, at this point, by far the place I’ve spent the most time in this game. I have always been a sucker for Splatoon’s story modes, and they’ve gotten better and better with each entry in the franchise. Chock-full of hybrid puzzle-shooter-platformer challenges and deep lore that is entertaining though ultimately inconsequential, each story entry seems to build on the last, with Splatoon 3’s focusing on the Squidbeak Splatoon’s quest to combat a strange fuzzy-ooze that is turning the plentiful sea life of Splatoon’s world into mammals.

Featuring over 70 stages, Splatoon 3’s story mode merges the traditional Splatoon story stages with the “test” format that debuted in the Octo Expansion, though this time most stages are hosted by the O.R.C.A. artificial intelligence system rather than a sadistic sea cucumber. Stages each have their own sets of weapons you can choose from to complete them, with rewards changing depending on how difficult it is to complete the stage with that weapon. The difficulty in these stages ranges from fairly easy to hair-pullingly difficult, but the good news is that you don’t have to complete every single stage to get to the end. There is a reward for completing each stage with at least one of the available weapons – however, in my experience there’s not a specific reward for total 100% completion. 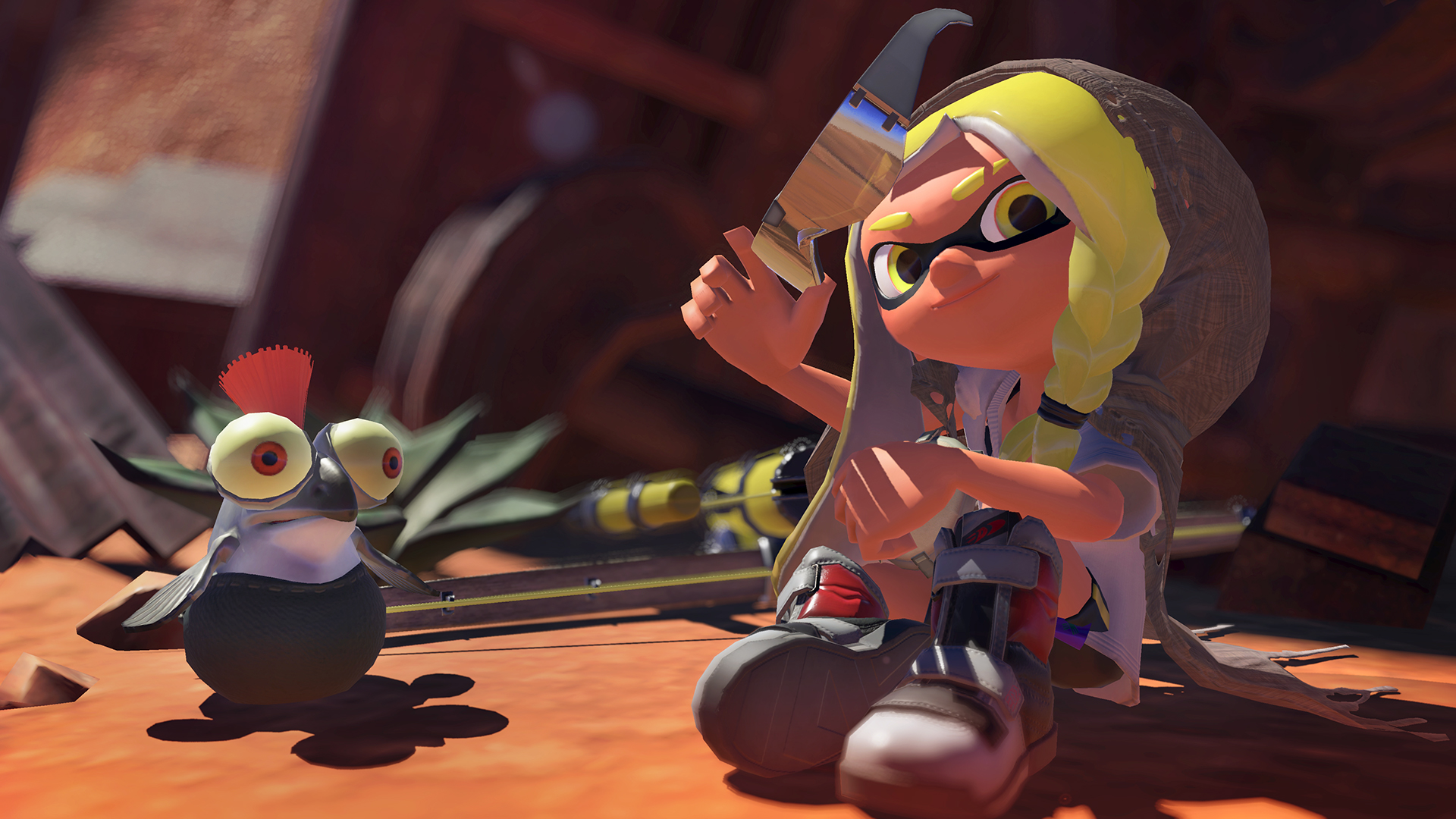 Like other Splatoon games, the story itself isn’t anything to write home about, but it does get the job done, being fairly engaging and full of more than a few surprises. There is, of course, plenty of funny snark and a healthy dose of puns from Callie and Marie, Agent 1 and Agent 2, throughout the campaign to keep you entertained. Entertainment isn’t the only thing you’ll find either, as the Secret Scrolls and Alterna Logs you’ll collect throughout the story also give some more backstory to Splatoon’s world, and I’m sure fans of the lore of this franchise will eat them right up.

Pick a Card, Any Card

Splatoon 3 does have one entirely new mode, Tableturf Battles, and it operates pretty differently than the rest of the ink-shooting fare offered in Splatsville, but by no means is it less fun. Located around the back of the Grizzco building, there is an area of Splatsville that is devoted to this brand new card game. As you play Splatoon 3, you’ll occasionally earn card packs as rewards, and these card packs can be used to build a Tableturf deck. 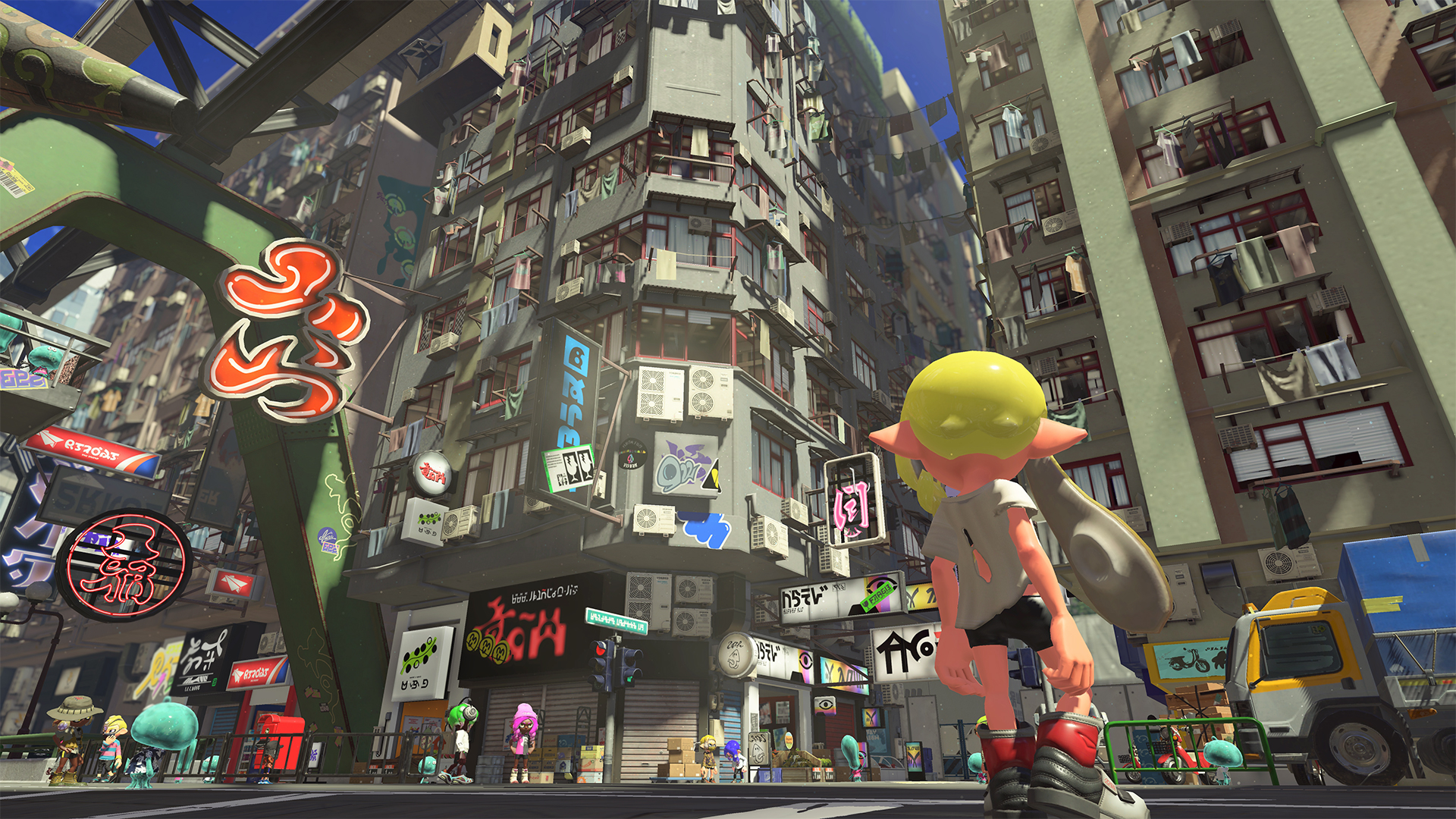 Played on grids of various shapes and sizes, Tableturf Battles will have you playing cards to take up as much space on the grid as you can. Each card has a different pattern of squares it will cover, and it’s up to you to find the best arrangement you can during the battle, while your opponent does the same. Tableturf Battles are only able to be played offline against the game’s numerous NPCs or copies of other player’s decks at the moment, but that doesn’t make them any less fun. While I initially thought it was going to be a pointless side mode, I’ve spent a lot of time in Tableturf Battles and really come to enjoy the strategy involved, and collecting cards depicting your favorite weapons and characters is always fun.

No Splatoon game would be complete without plenty of style in tow, and Splatoon 3 turns it up even further by expanding the options in a few different ways. Gone are gendered Inklings and Octolings, instead you’ll be asked to pick your “style” at the beginning of the game, with every hairstyle and piece of clothing accessible for every player. There are great new hair and pants options in the character creator, and some snazzy new three-tone eye colors that look particularly striking. 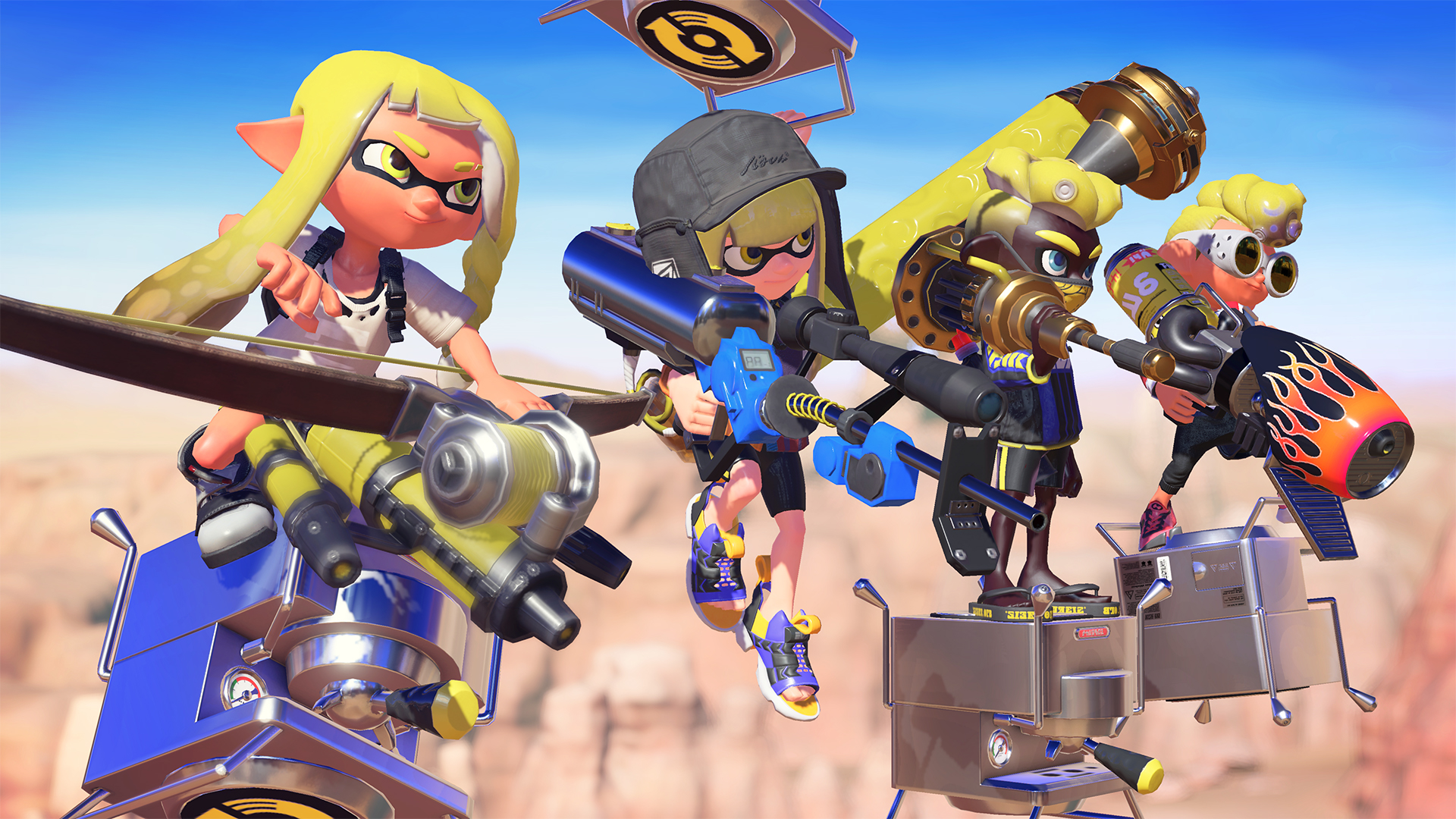 The clothing system works a little differently from previous games, with expanded options available for upgrading your clothes. Any time a duplicate of an item you already own is in a shop you can pay to upgrade that particular item; adding ability slots and making it easier to level up that gear. Murch can also add abilities directly to any piece of gear, provided you have enough Ability Chunks for it. This makes it easier than ever to look exactly how you want while not sacrificing any crucial abilities for your playstyle.

There are also some entirely new ways you can customize your Splatoon 3 experience, with lockers, Splat Tags, and emotes. Each player gets their very own locker in the multiplayer lobby, and you are free to fill it with any gear that you own, but there are also decorations and stickers that you can buy and earn to make your locker truly yours. Your Splat Tag is another way you can represent yourself in Splatoon 3, and while there aren’t nearly as many customization options, you can change the banner and add badges that you’ll earn through normal gameplay to show off some of your achievements. The last new customization option, custom emotes, is one of my favorite new additions. After winning a match your Inkling or Octoling will strike a pose with their weapon by default, but there are custom emotes available that change this pose, allowing you to look as cool or as silly as you want after winning a match.

Like most first-party titles on the Nintendo Switch, Splatoon 3 looks gorgeous. Ink looks rich and vibrant during matches, and the world itself looks better than ever. Online matches are always smooth, and didn’t notice any frame drops in even the most intense Salmon Run sessions. In fact, the only place I noticed any sort of slowdown whatsoever was in the lobby, where it seems things just slowed down in general for a few seconds after entering the lobby and right before or after a match, though this wasn’t a consistent occurrence.

Splatoon is likely to remain one of my favorite Nintendo franchises for a very long time, thanks in large part to continually stellar entries in the series. While it is technically more of the same, that isn’t a bad thing, because thanks in large part to tweaks to the multiplayer formula and additions to Salmon Run, Splatoon 3 met and then exceeded the high bar set by Splatoon 2 and the Octo Expansion. The story mode is as fun, unique, and challenging as it’s ever been, and additions like Tableturf Battle and new customization options just add to an already winning formula, giving players more to see and more to do in Splatsville. 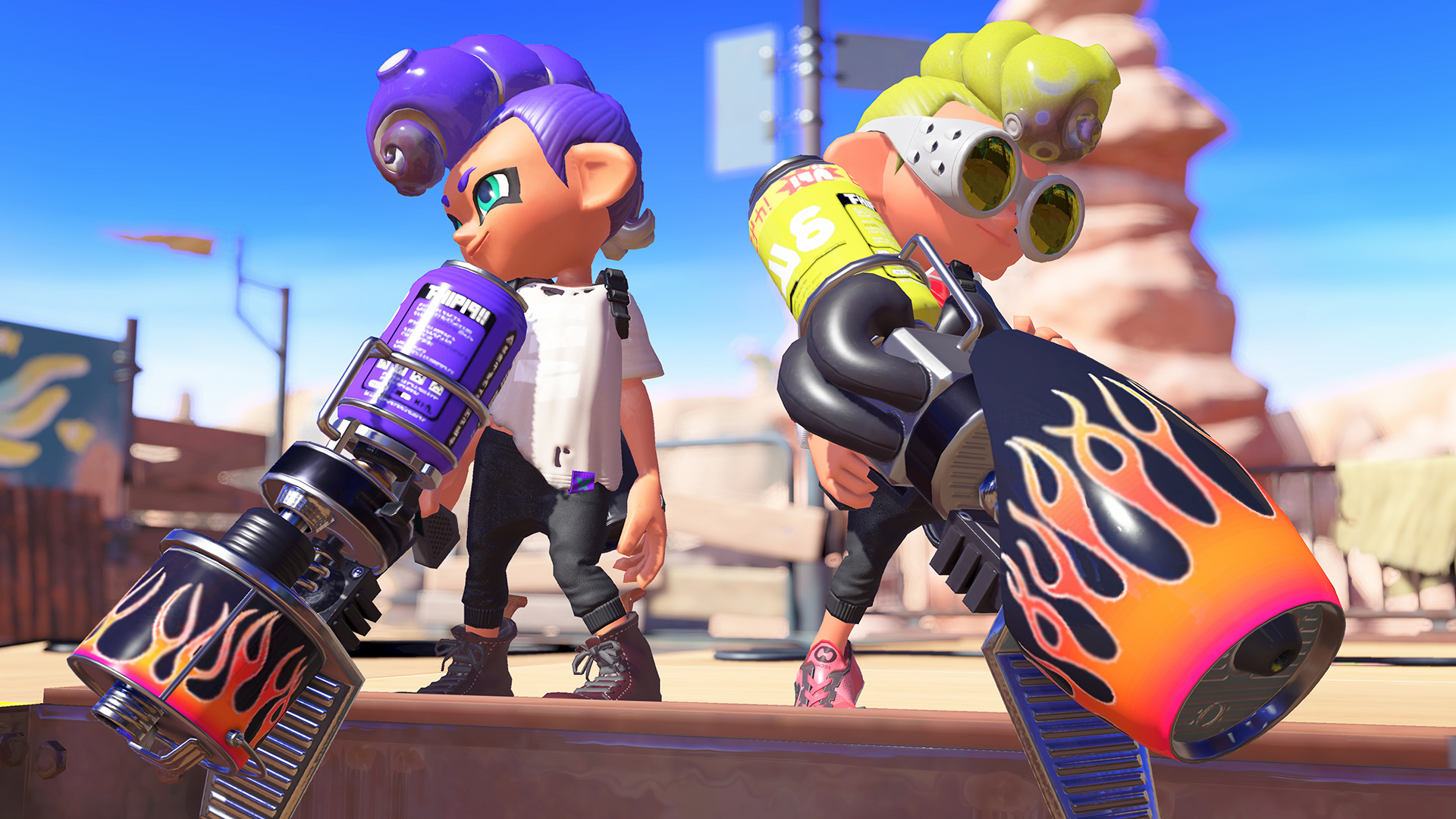 With more updates surely on the way, and the confirmation of paid DLC in the future, I’ll be inking my way around Splatoon 3 for a long time to come, so I’ll see you out on the turf.