Review – Scott Pilgrim vs. The World: The Game – Complete Edition

Resting comfortably and rent free at the intersection of games I like and games I like to support is Scott Pilgrim vs. The World: The Game. Released in tandem with Edgar Wright’s film adaptation of Bryan Lee O’Malley’s graphic novel, it turned Toronto into River City and captured classic beat ‘em up vibes perfectly.

Everything that made that (now delisted) release enjoyable ten years ago is alive and well in this Complete Edition, including its DLC. Back on multiple systems and making its Nintendo console debut, it’s the perfect chance to dive in. Read on to see if the clamoring for this one’s return was worth it, or if Scott Pilgrim vs. The World: Complete Edition is just another evil ex.

Best fighter in the province

From a gameplay perspective, Scott Pilgrim is a solid beat ‘em up. Each of the four original playable characters have their own moveset built around a core template of attacks and skills. The extra characters (unlockable and former DLC) have some overlap with them, but all together it’s a nice amount of variety. They all play through the same stages, but have their own endings to encourage replayability. 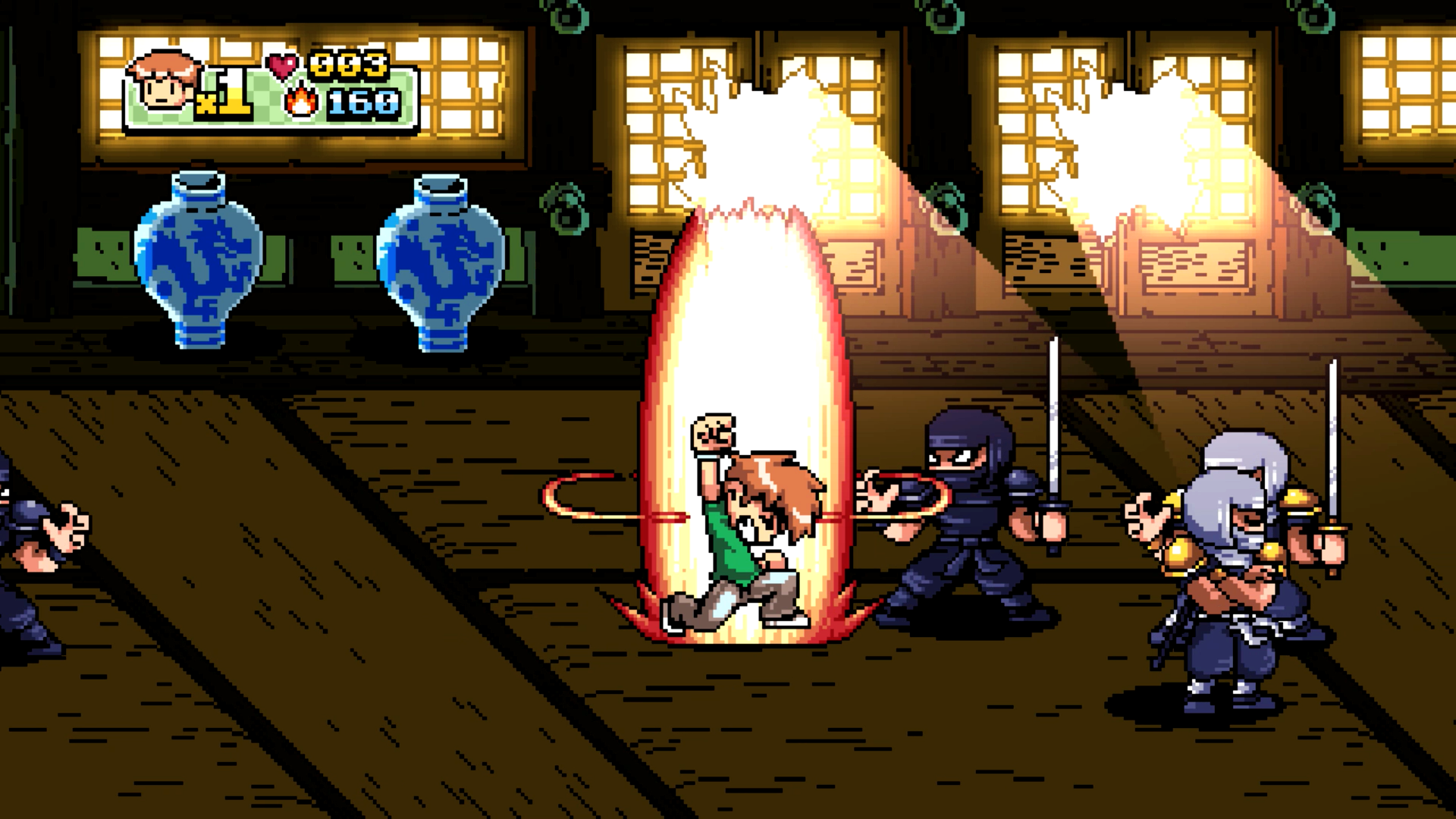 While the base gameplay is pretty beat ‘em up classic, there are some more unique elements. Characters level up as you knock out jerks all over the province, gaining better stats and more attacks. They can also call in assists (Scott can summon Knives to attack with pure infatuation) and when in multiplayer it’s possible to pull off big combination attacks.

Per its arcade-like roots, multiplayer is when Scott Pilgrim vs. The World: The Game is at its best. Mobs can sometimes be overwhelming if you’re playing solo, especially in the early game when your stats are low and you don’t have more suitable attacks for groups. I’m a firm believer in couch co-op’s power, but thankfully (and unlike when it first released) the Complete Edition has improved its other options. 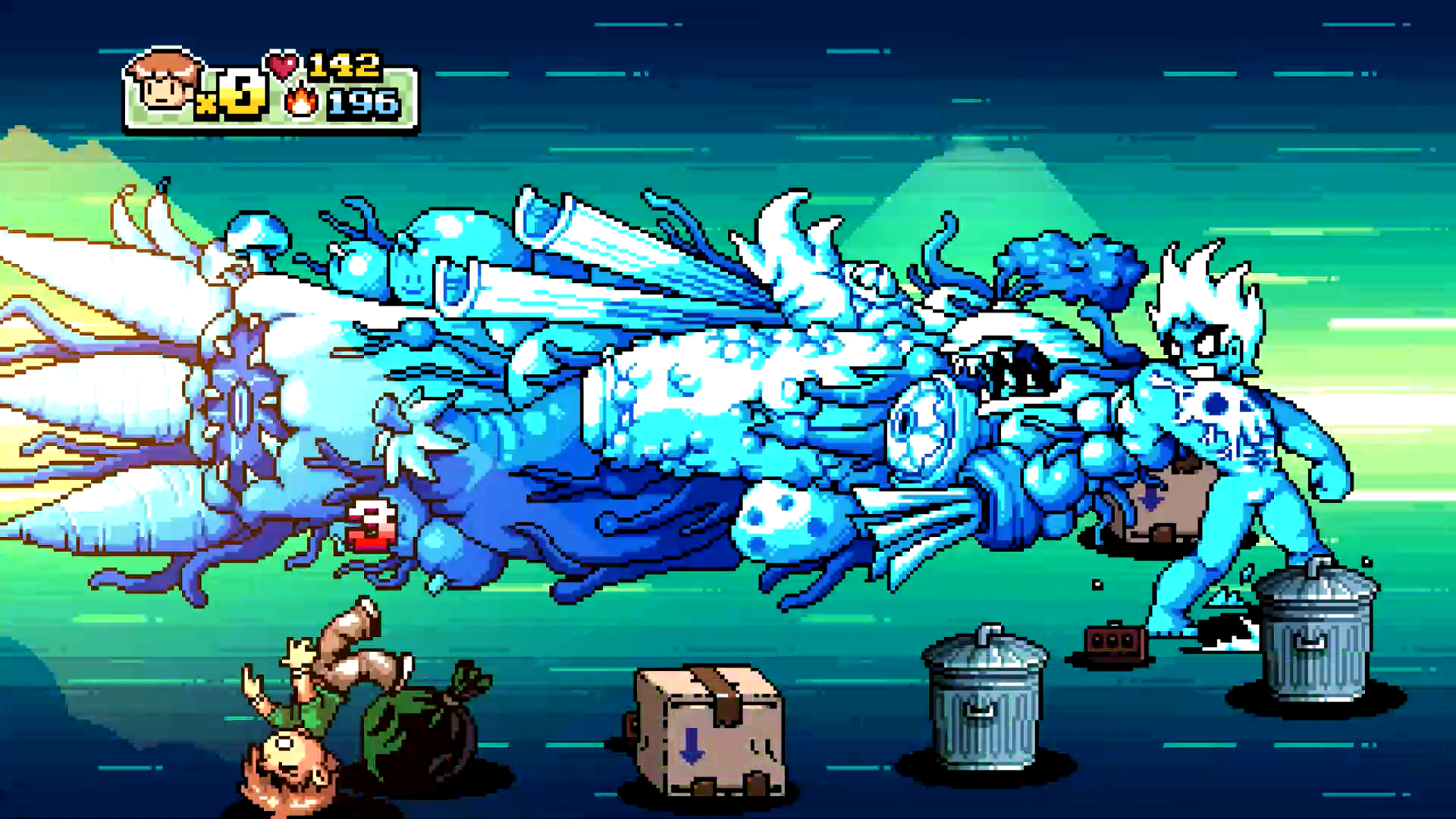 Since it includes the Knives Chau and Wallace Wells DLC packs, this rebranded SP release really is Complete. There are now extra multiplayer modes outside of the story mode, and when you do dive into that it’s much better. Drop in/Drop out multiplayer and online play are now here and not tied to easily missed extra purchases. It is worth noting that when you start playing the game you won’t be able to play as Knives – you must instead connect an Ubisoft account to Chau down.

The Wrath of the League of Evil Exes

If you aren’t familiar with SP’s set up, its main character is a twenty-something guy in a band who doesn’t really have himself together. Then Ramona Flowers, a mysterious Amazon delivery girl with ever changing hair colors, enters his life. To date Ramona, Scott has to defeat her seven evil exes in fights. Along the way there’s self improvement and actualization, Vegan Police, fighting robots, corporate sell-out, and dipping sauce. 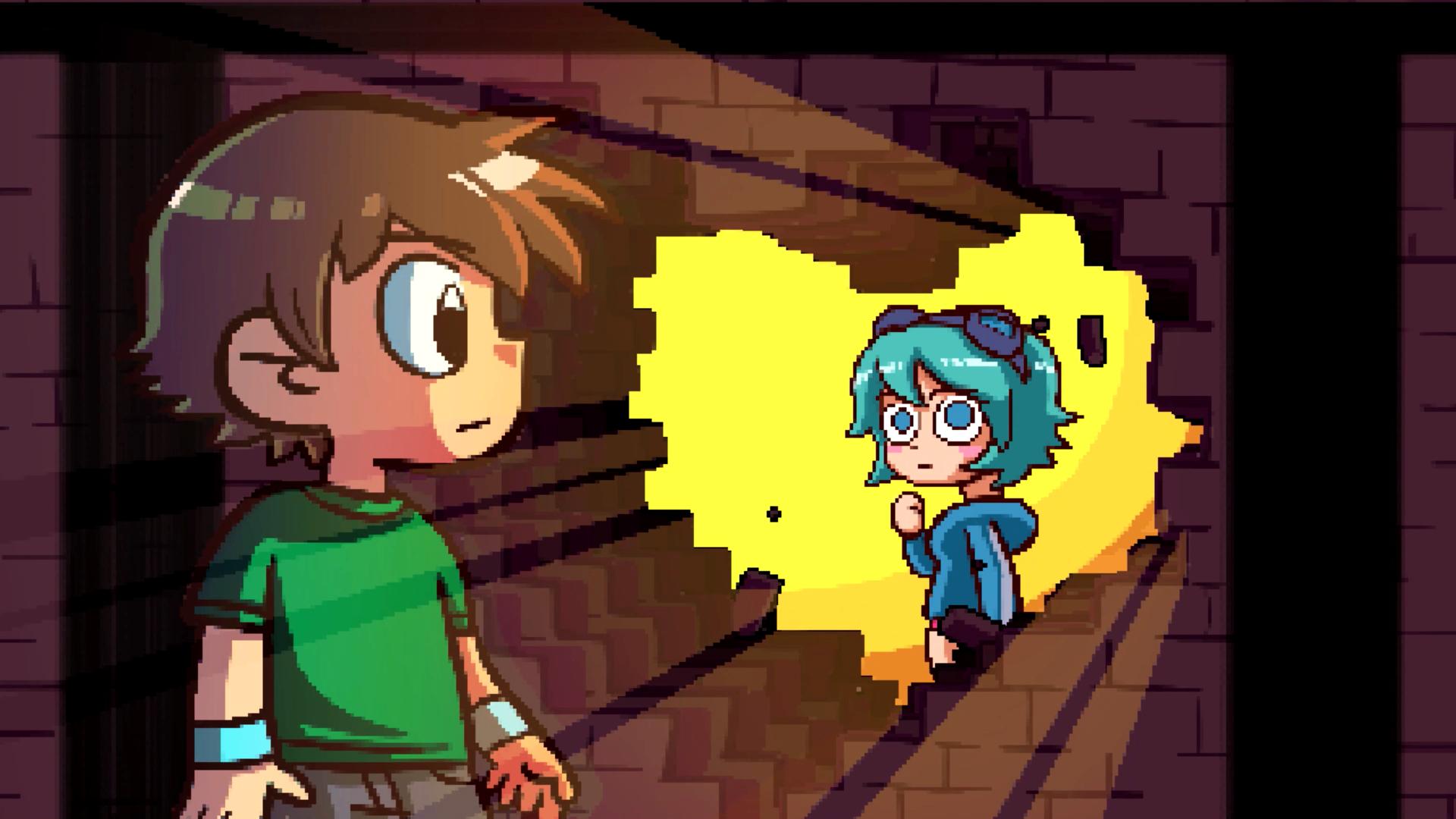 Though the story doesn’t get much focus here, the game does a great job of hitting all the beats of the Scott Pilgrim comic in its progression and cute post-boss scenes. This includes some more subtle nods and cameos, though anyone who’s only seen the movie may miss these. As it’s an adaptation of the comic and not the movie (despite its original release timing) this is understandable. If you haven’t read the books, doing so can definitely make this a fuller experience but it isn’t completely necessary.

The game doesn’t just reference itself, though. On top of the obvious River City Ransom callbacks, visual and text based nods to the likes of Mario, Sonic, Final Fantasy, Street Fighter and more work their way into the experience. Other forms of media get in on the fun as well, making for an experience full of nods that even non-fans of the source can appreciate. Scott Pilgrim as a story already took plenty from video games and greater pop-culture for its ideas and jokes, and that spirit comes through from start to finish. 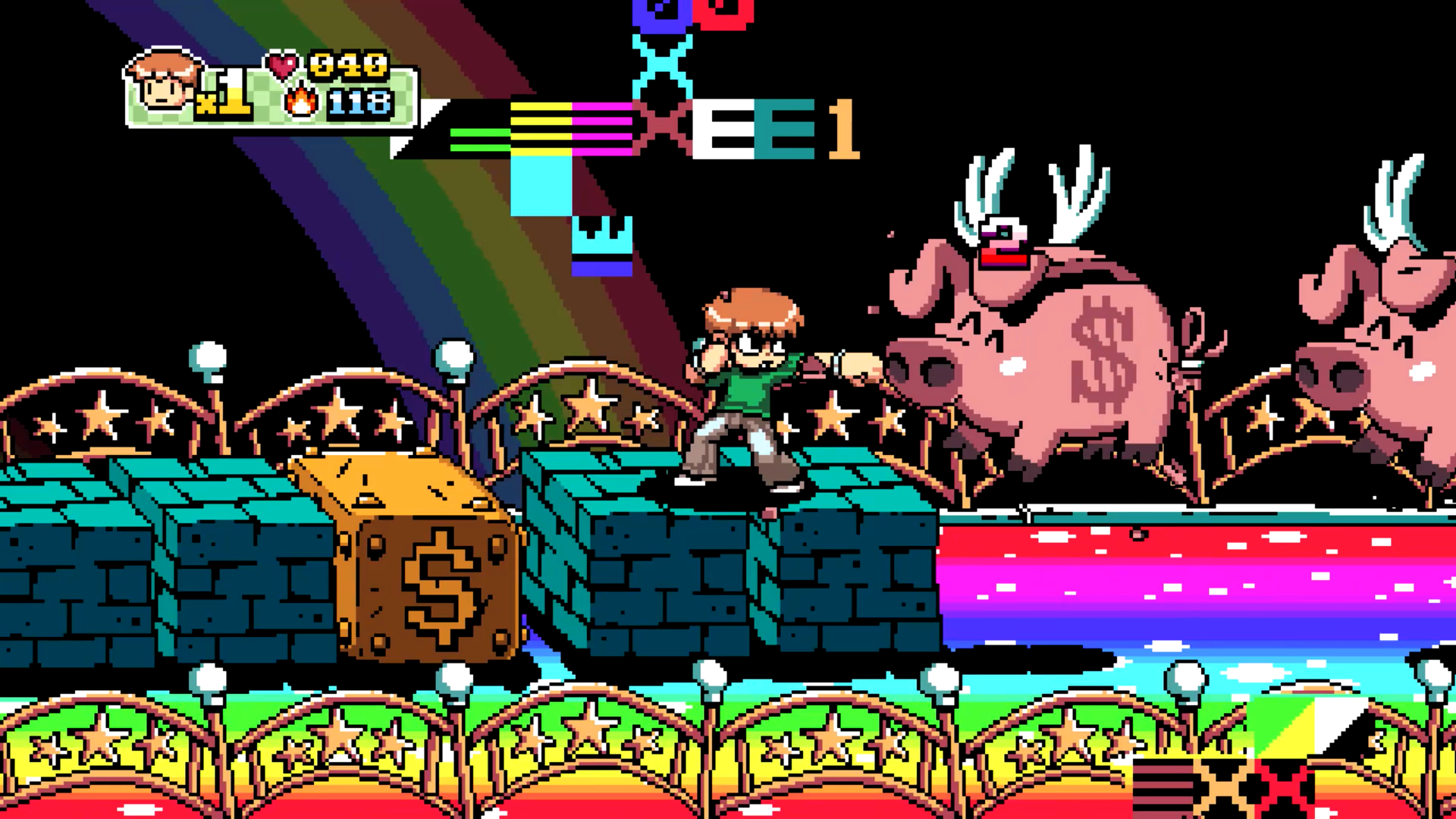 What elevates Scott Pilgrim vs. The World: The Game is how much love went into its presentation. The game’s art style, Paul Robertson’s sprite-work, and the Anamanaguchi soundtrack all enhance the experience tremendously. A single playthrough can be taken care of in a handful of hours, but from a visual and auditory perspective it’s going to be a very dense handful. You’ll be humming these songs long after the credits roll – I have for ten years now.

This is the first time I’ve revisited Scott Pilgrim vs. The World: The Game since its original release’s DLC dropped. A few other beat ‘em up stars have come along since then (please check out River City Girls and Streets of Rage 4) but none check as many boxes like Scott Pilgrim does. There’s charm in every pixel and enough long term goals to support the campaign’s gameplay.

A few common shortcomings to the genre are here (the earlier mentioned crowd control, items that don’t tell you what they do until you buy them) but that’s not what keeps me coming back to this one. Scott Pilgrim vs. the World: The Game – Complete Edition is an achievement in creators caring about their work and fans making their voices heard. This game’s return seemed impossible this time last year, but in the end love (and self respect) conquer all. 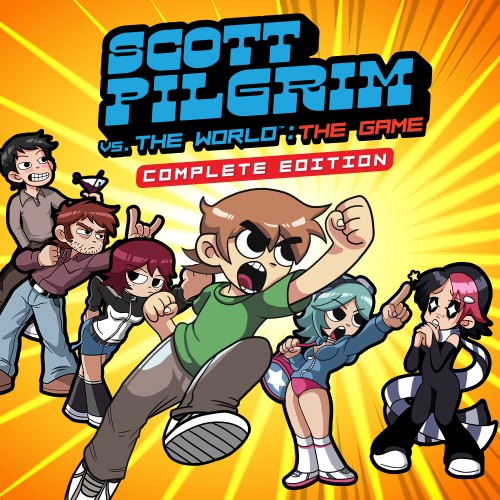