There was a time, long bygone, when getting stuck in a video game was a problem not easily resolved. Before the internet, before dedicated strategy guides, before you could Google a side quest and find five different walkthroughs on how to beat it, children playing the original Legend of Zelda were left to solve the elaborate open-world puzzles of Hyrule with only their wits, their friends’ hearsay, and the odd copy or two of Nintendo Power. It was grueling, byzantine, and downright baffling… but it also provided a sense of infinite discovery, that any particular nook and cranny might hold a secret worth revealing, that in the act of exploration you can uncover a whole new side of something.

It’s a high that countless games of the modern age have attempted to recapture, often in big-budget open-world games stuffed to the gills with activities, reaching for an endless stream of worthwhile content but often ending up as a series of chores. So few manage to really, truly express that sense of grand discovery and exploration — but this unlikely contender, a 2D-action-adventure RPG epic that started off as a humble flash game, has captured that essence and so much more. And it does so with charm, style, and more than a little heart.

Phoenotopia: Awakening is a remake of Phoenotopia, a 2014 Newgrounds flash game that was far better than any Newgrounds flash game had any right to be. And now, six years later, it’s landed on Nintendo Switch with new areas, new tools, new content, and the same sterling core that makes this one of the best engrossing indie adventure games you can pick up on the Switch. 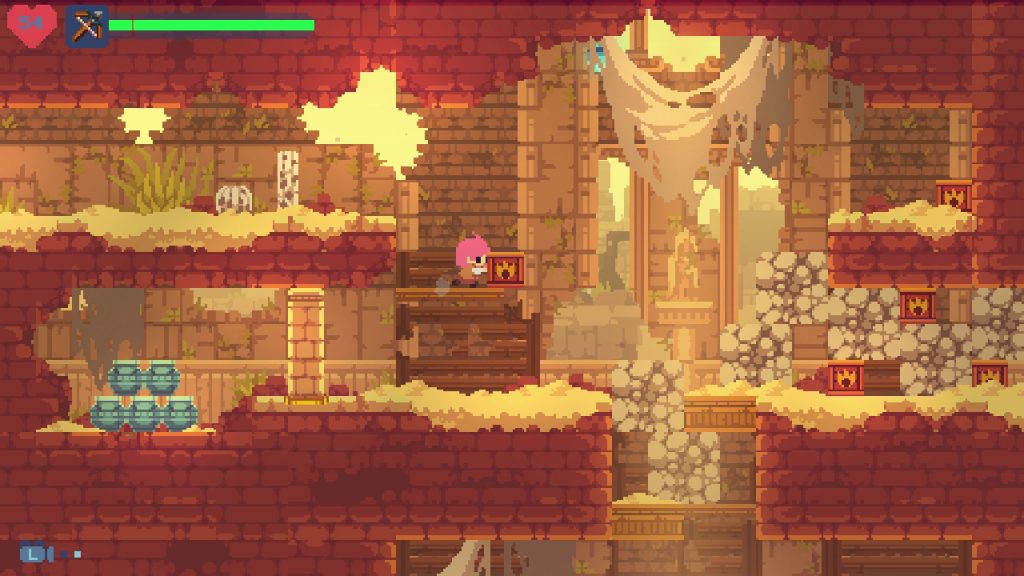 The game follows the journey of Gail, a young village girl living on a post-post-apocalypse Earth. One day — while attempting to round up the local kids playing in nearby ruins — aliens abduct all of the townsfolk, setting her on a long quest to find their whereabouts and bring them home. Along the way she travels to a number of other towns and locales, does battle with baddies both terrestrial and extraterrestrial, and discovers a great deal about the history of her planet… including the mysterious weapon known as the Phoenix.

The narrative isn’t the focus of Phoenotopia — nor should it be — but the game levies itself quite a bit with charming writing and NPCs. Characters you talk to often have multiple bits of dialogue, and several express their own unique quirks or mannerisms that stand out — whether they be a five year-old sovereign, a couple different nutty professors, or a group of traveling musicians. It’s not a laugh riot from beginning to end, but it’s a world that brims with life and personality nonetheless.

And it’s a pleasant-looking one, too. At a glance Phoenotopia indulgences in the stock pixel-art style of countless other indie titles, but it makes up for that stock aesthetic by indulging in gorgeous amounts of environmental detail. Cities are stuffed with little intricate designs, just shy of being overbearing — and as a result appearing florid and lively. Colors pop, environments are distinct, and animations feel lively. There are three different locations that could be described as “grassland towns,” but each has its own distinct feeling and atmosphere. Throw in a soundtrack that can veer between ambient piano and hard battle rock, and it’s a game that conveys a distinct set of moods. 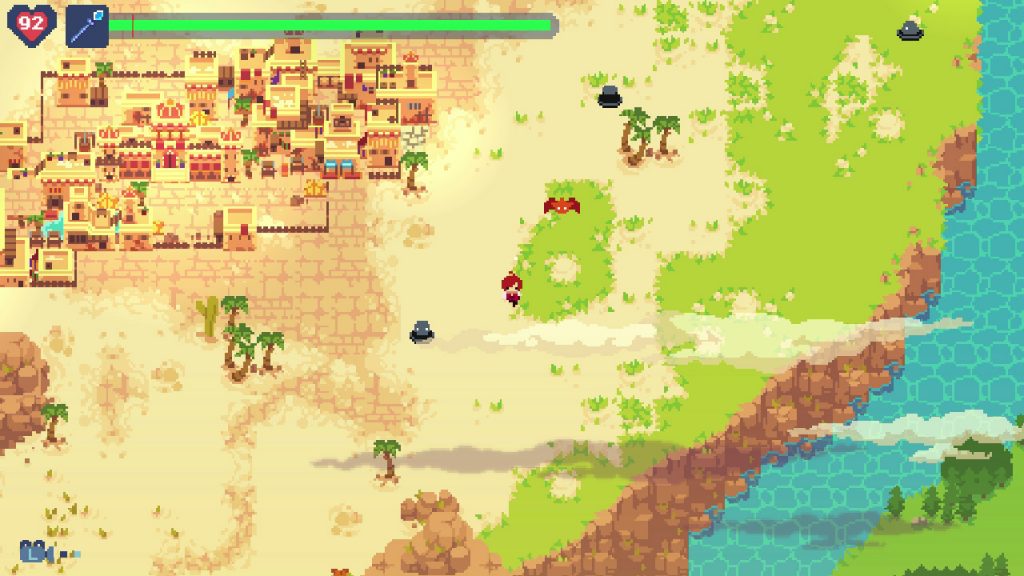 But this isn’t a game you play for the writing or the visuals or the audio — it’s one you play for the game. The closest analogue I can find for Phoenotopia’s genre is Zelda II: a side scrolling action-adventure game with RPG elements and deliberate melee combat. Both feature large “open worlds” that lead into smaller individual areas, both are filled with secrets, and both are more than a little inscrutable at times. I’m not a big fan of Zelda II. I absolutely adore Phoenotopia.

Phoenotopia’s combat is, in a word, clunky — but intentionally so, and that makes all the difference. Gail swings her bat with a clear start-up and swing, and any action that isn’t walking or jumping consumes stamina, meaning you have a limited number of attacks you can perform before you have to hold off and recharge. Foes often exhibit particular attack patterns or otherwise telegraph their movements, leading to a combat system that favors patience and perception over fast fluidity. Charging in and mashing A is likely to end up in repeated death, but learning how particular enemies move and operate will lead to greater success in the long run.

But make no mistake — you will die a lot. Phoenotopia is a very, very difficult game, and adjusting to its particular mechanics takes a while. Healing (done via consuming food) takes time, just like any other action, and can be interrupted — do it at a poor time and you’ll only end up more hurt. While you do have a number of useful sub-weapons at your disposal, like slingshots and bombs, they each have their own drawbacks, and spamming them can leave you with no energy to run and make a getaway. It’s punishing, but fair, and learning to work in the constraints of the system is part of what makes the game so exhilarating to play. Despite countless losses and near-victories, I never once felt truly enraged or cheated while playing. Every mistake offers a situation you can learn from. 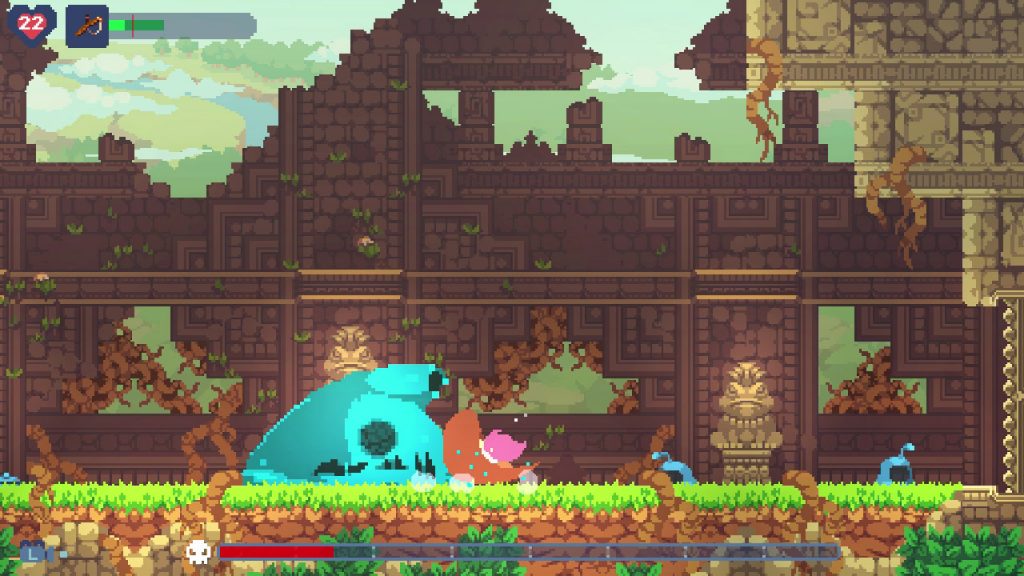 It’s not just in fighting that Phoenotopia will test your abilities, however — the game is chock-full of puzzles in both a micro and macro sense of the word. Some are simple, such as figuring out the particular set of flute notes that will open a door. Others require more thought, such as elaborate light switches or timed button presses. There’s an entire subset of areas — called GEO Dungeons — that basically act as Shrines in Breath of the Wild, offering you locations with a particular kind of puzzle to whet your logic receptors against. And these puzzles are almost universally fun and engaging, and rarely the sort of thing where I found myself bashing my head against the wall in frustration, even when they were quite difficult.

And there are so, so many of them, too. Phoenotopia in general is a game just chock-full of content from top to bottom, from basic collectibles like health and stamina increases to Moonstones (which can be traded for a variety of functions) to more specific combat techniques and songs that bolster Gail’s arsenal. The open-world is deceptively big and filled with secrets, to the point where I was backtracking right up until the end of the game to discover new hidden items. And even after almost 50 hours of playing, I still obtained only 61% of the game’s items! There’s so much to unpack in the world of Phoenotopia, and I found myself combing through area after area in search of something I might’ve overlooked, bolstered by the fact that the game’s so obscure and new that there are no guides on the internet, and no tips to help me combat the obstacles in my path. Having to figure out how to progress on my own, without direct guidance and only the slightest of nudges, was an experience I’d long forgotten… and one I don’t have much these days.

And part of that is most definitely by design. Phoenotopia isn’t a game of waypoints or objective markers or even quest logs — just about every wayward key or misplaced item has a usage you have to figure out on your own. If a passing NPC tells you they need a dog, well, then you’re going to have to remember that detail and figure out how to get a dog yourself. It seems like the sort of thing that should prove directionless and frustrating, but it only invites the player to scour more of the world in search of secrets and tools that might net them goodies, paying keen attention to wayward bits of NPC dialogue so that they might find a clue or two. 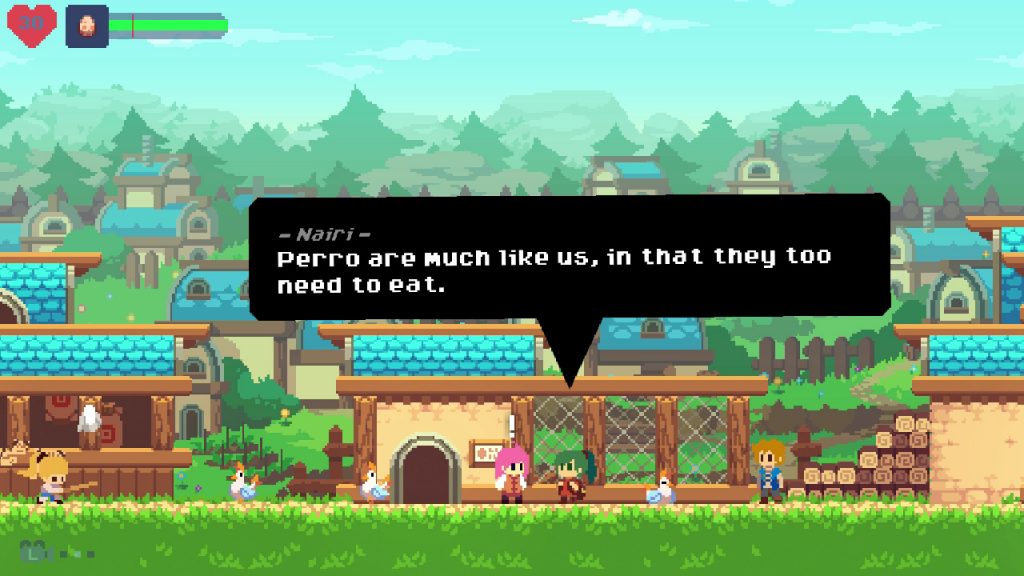 Some part of me wishes to portray all the design decisions of this game under that intentional obtuseness, and to claim that it’s all in service of enhancing the experience rather than detracting from it. But ultimately there’s no skirting around the fact that the game is a little lacking in certain key elements. For one thing, there’s no maps of any sort, meaning you either have to hand-draw them yourself or just rely on your mental memory of where things are, which is a pain either way. While I personally like the lack of clear directions in most side quests, just a small journal feature to keep tracks of prompts or hints or even just locations might’ve been really beneficial. And having markers to tell you when an area is cleaned out of collectibles would have been really, really nice. While I think the fun of discovery outweighs the lack of QOL features, it’s easy to see how someone more used to modern conveniences would get easily frustrated while playing.

The other significant flaw in the game is that it’s glitchy. Not to experience-ruining levels, but there’s a good deal of eyebrow-raising moments. I’ve had collectibles duplicate themselves upon exiting and reentering the screen (One Heart Gem turned into multiple at no extra cost, how novel!) while other times have brought about wonky hit detection or other oddities. While the game runs smoothly, and I never had a hiccup cost me a close boss fight, the size and scale of everything led to a fair share of… questionable moments.

The most indicative moment of playing to Phoenotopia came in the midst of one of the game’s many (excellent) boss fights. After throwing myself against the baddie for over half an hour to only incremental improvement, one random respawn made me realize that — somehow — the game had glitched in such a way that I became impervious to all damage. I could freely wail on him and notch an easy victory if I so desired. And after spending so long, surely I would just want to move on with it, right? Wrong. I reset the game so I could earn a victory fair and square. And if a game ever makes me want to do that, I know it’s doing something right. 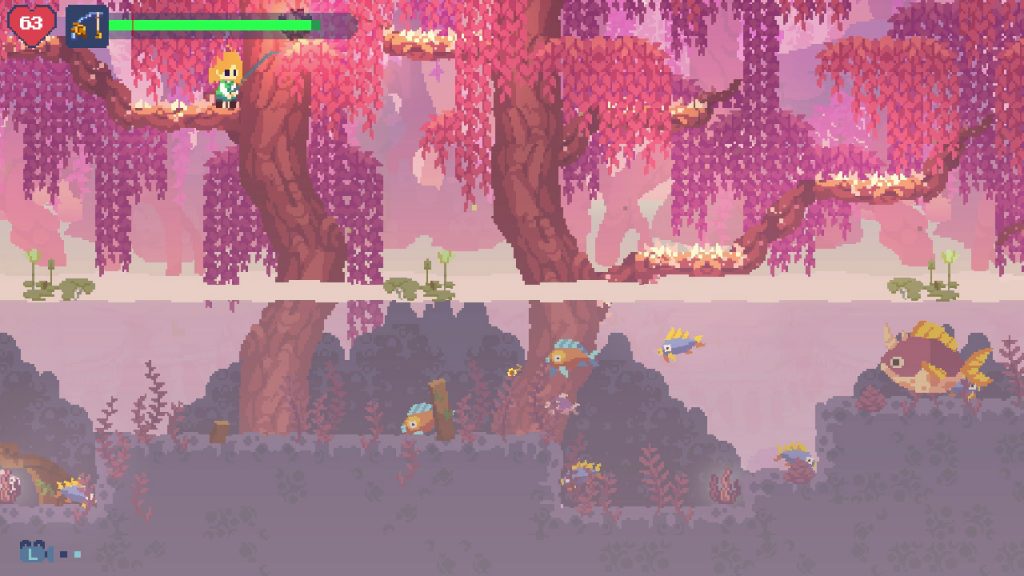 Phoenotopia: Awakening is ultimately one of those games that won’t suit everybody. The lack of difficulty settings or other accessibility tweaks mean that it doesn’t have much appeal for the casual or relaxed gamers out there. While charging through to the end is a pretty straight shot, getting every collectible will require quite a bit of backtracking. And it’s ultimately a game that demands a lot of patience on every front — whether it’s learning the combat, or figuring out a puzzle, or determining where you’re supposed to find an item to clear the way.

But to those looking for that antediluvian sensation of discovery, of getting lost in a world whose size belies how much detail and care is put into it, who’s willing to learn and grow and explore… Phoenotopia: Awakening proves to be more than worth your time. It takes inspiration from countless classics to craft an experience that taps into nostalgia receptors while still feeling fresh and fun and carving out its own identities. It’s one of the best games I’ve played on Switch this year, and if any part of it sounds enticing in the slightest, you should absolutely add it to your library. If you’re a fan of Zelda, Cave Story, Metroid, or any game in-between, give this game your attention — and your money. 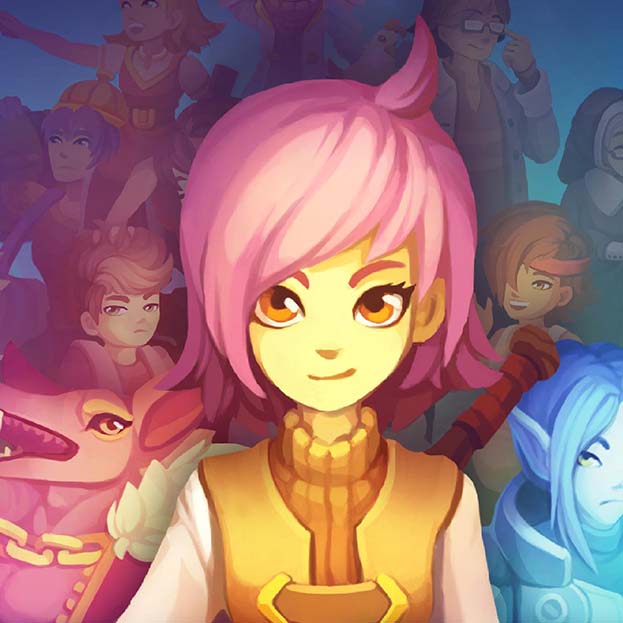