Review: Moving Out for Nintendo Switch

Does anyone like moving? Packing all your stuff up and shoving it into a truck, knowing you’re just going to have to un-shove it from that truck once you get to your new home is a massive source of stress, especially when you consider the fact that you have to try not to break anything in the course of all your shoving and un-shoving. Moving Out, the latest game from SMG Studio, takes all the stress out of moving, shoves it into a truck full of chaos, and then unpacks it as a whole lot of fun.

Welcome to the team, F.A.R.T.s

You start Moving Out as a brand new Furniture Arrangement & Relocation Technician for Smooth Moves, the premier Furniture Removalists of the town of Packmore. The company starts small, but as you complete more jobs your reputation will grow, bringing you larger and weirder jobs. Moving furniture is easy: just pick it up by holding either ZL or ZR, and let go by releasing the button. Moving your character, however, is not quite as easy. The movers control a bit like you’re pulling them around by a short rope tied around their waist, which, overall, really adds to the chaos and makes it feel like these F.A.R.T.s are brand new and especially clumsy movers, though there are times when a small bit of frustration can seep in when they won’t move quite the way you want them to. 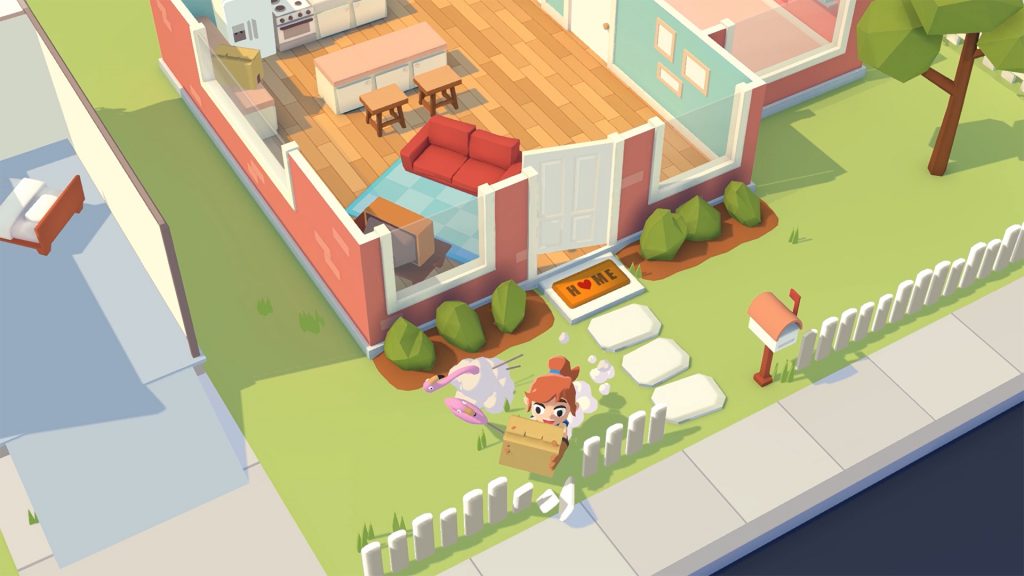 You might be asking yourself, “What if I’m on the second floor? I don’t want to carry all this stuff down those stairs; that turn is way too tight!” It’s easy enough to get that furniture out to the truck a little quicker and easier, as long as you don’t have an incredible amount of respect for your surroundings (or the furniture). Just hold the Y button to begin aiming, and release it to let that furniture fly. Most of the time smashing things up isn’t a problem, and if it is, the game will let you know. I can say with confidence that I don’t think I’ve had a single TV make it to the moving truck intact during my time with Moving Out.

Moving Out truly feels like a game for just about everyone. It’s incredibly easy to get into, and SMG Studio makes things even easier with the Assist Mode. Moving Out’s Assist Mode is nothing short of incredible. Aiming to let anyone enjoy the game they way they want, Assist Mode gives players the option to extend time limits, make heavy objects lighter and more easily carried, remove stage hazards, skip failed levels, and even the ability to have the furniture you load into the truck disappear so it doesn’t get in your way as you approach the end of your packing list.

On top of all that, SMG Studio has really opened the door to make this game accessible to as many people as possible by including subtitles for every spoken word, the ability to scale the UI to make text easier to read, as well as the option to switch the entire game into a dyslexic-friendly font. To add to the accessibility options, there are also a few different controller layouts available, including the ability to play with just one hand. This particular controller layout is also utilized when accessing the challenging Dual-Mover Mode, which players can turn on to let them control two movers at once, accomplished by applying the one-handed controls to each side of the controller. 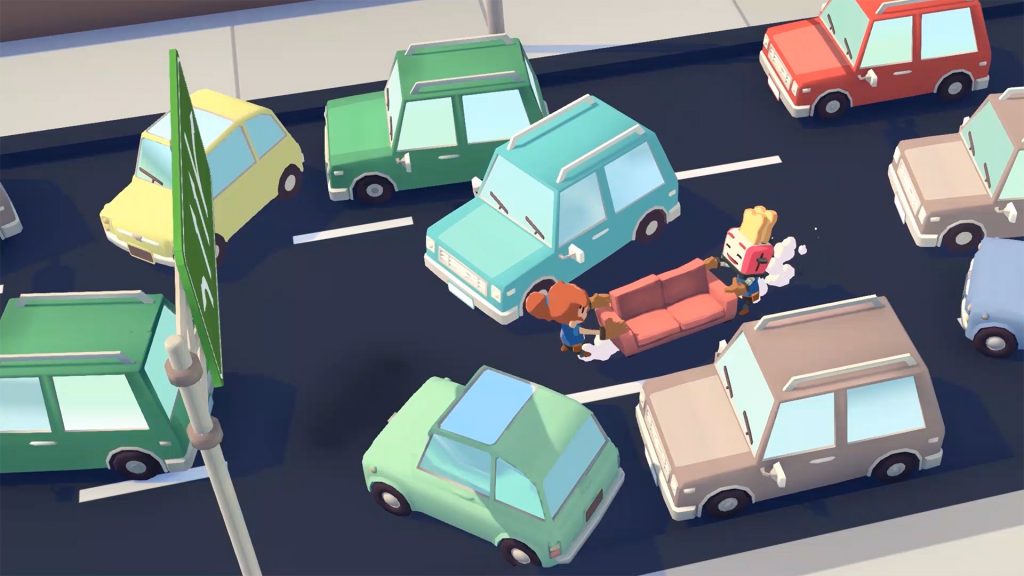 As far as how well this game runs on the Switch, I have next to no complaints. Load times are fast, environments look great, and if I noticed any stuttering it was probably on the endlessly entertaining world map. There were a few weird clipping issues and times when either a bed would get frustratingly stuck in a doorframe or a movement issue where my character wouldn’t do exactly what I wanted, but I have a hard time believing any of those things would be Switch-specific.

Moving Into the Fun House

As a cooperative-party-puzzle game, Moving Out feels very much in the vein of games like Overcooked!, which is appropriate, considering it’s being published by Team 17, who published the first Overcooked! and helped develop Overcooked! 2. There’s a huge difference between Overcooked! and Moving Out, however, and that is the fact that I don’t get frustrated when Moving Out devolves into a chaotic mess. There’s a simplicity in the fact that I’m just trying to get furniture from point A to point B inside of a time limit — and that just doesn’t really come across with Overcooked!’s requirement to prepare and cook several dishes correctly in order to earn a score. I’ve been able to enjoy Moving Out because the hilarity and chaos never feel like they’re getting in the way of the objective. 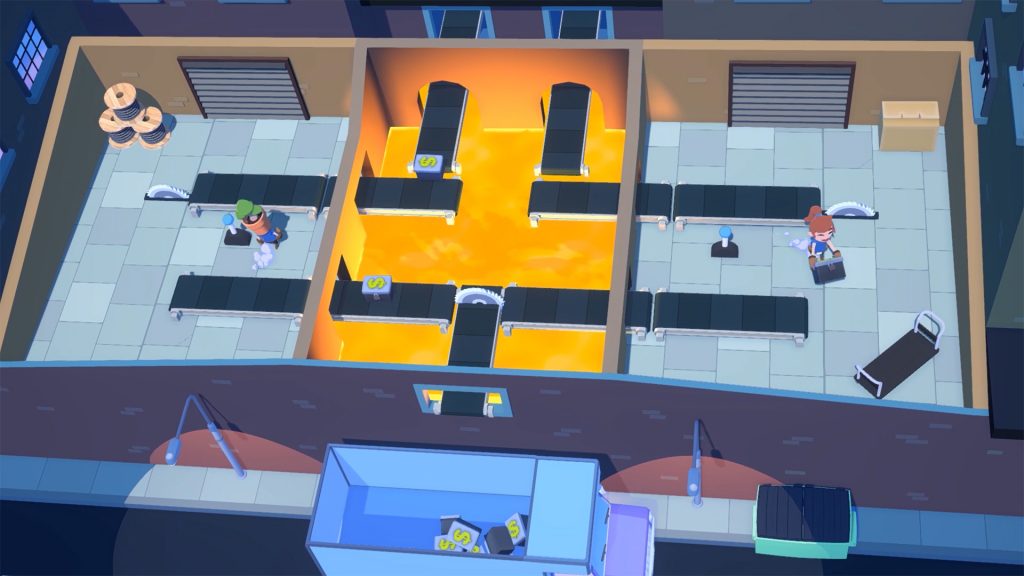 The world map is an absolute delight as well, full of other cars driving on the road and stationary, destructible objects. You can wreak almost as much havoc in the overworld as you can while playing actual levels — running cars into the river or busting your way through billboards is an enjoyably chaotic touch. You can also access the Arcade from the world map, allowing you to test your moving skills by playing through some rather difficult simulated scenarios rather than actual moving jobs.

Moving Out is, quite simply, a delight. When it was first announced, I had hoped for the best from SMG Studio, since they’ve put out consistently great titles on the Switch for years now, and they’ve still managed to exceed my every expectation. The writing is funny, the concept is wonderful, and the execution is nearly flawless. Like Death Squared before it, Moving Out is going to be the multiplayer game I not only proudly recommend to every Nintendo Switch owner for a long time coming, but also a game I’ll gladly play and enjoy for many years to come. 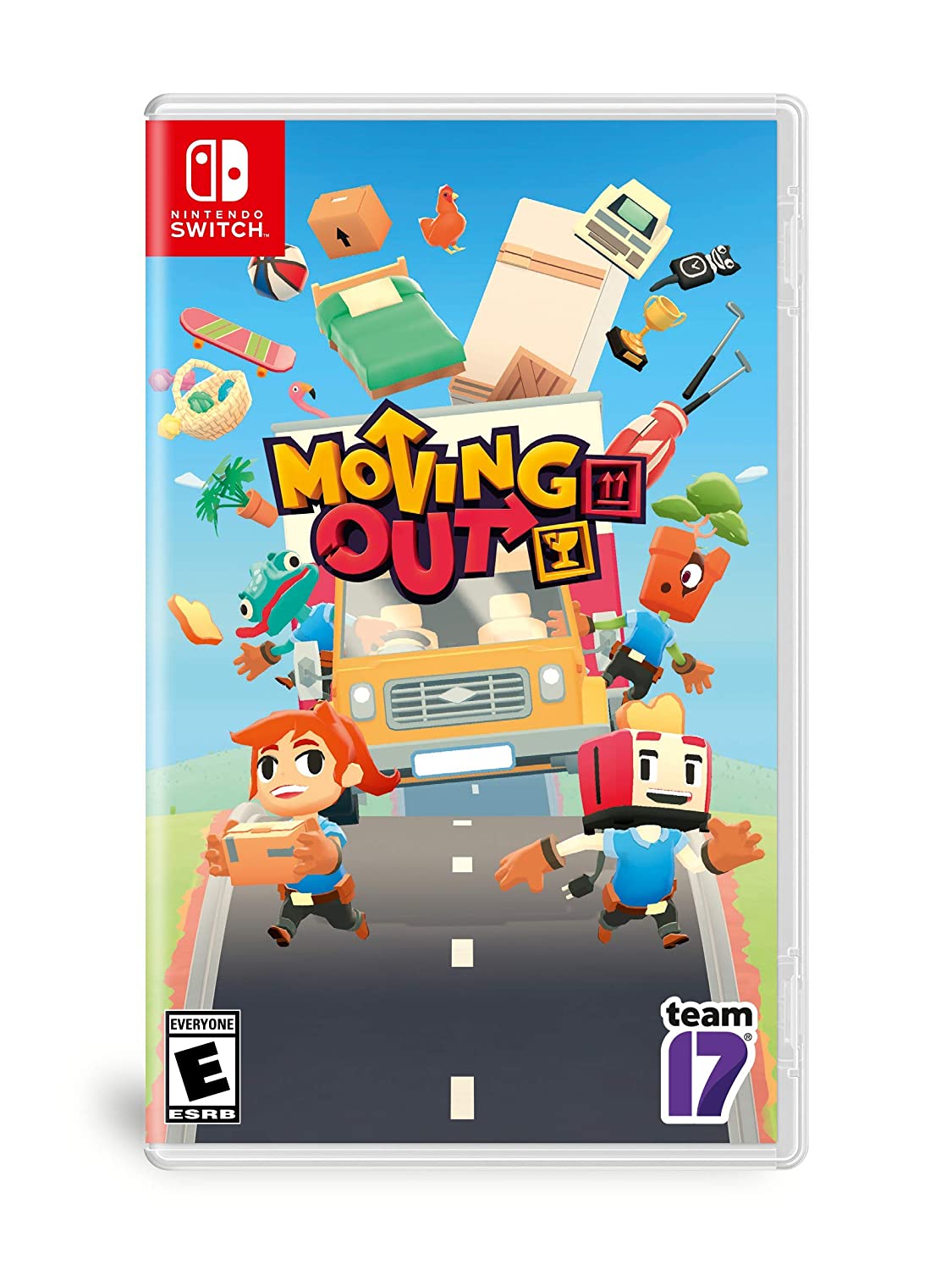