Set a few years after the first game in the series, Monster Hunter Stories 2: Wings of Ruin follows a new Rider from Hakolo island as they investigate the appearance of strange pits of light that have seemingly caused all of the world’s Rathalos to disappear. In addition to this, the Rider is tasked with looking after a Rathalos egg bestowed by their grandfather’s Rathalos, Guardian Ratha. 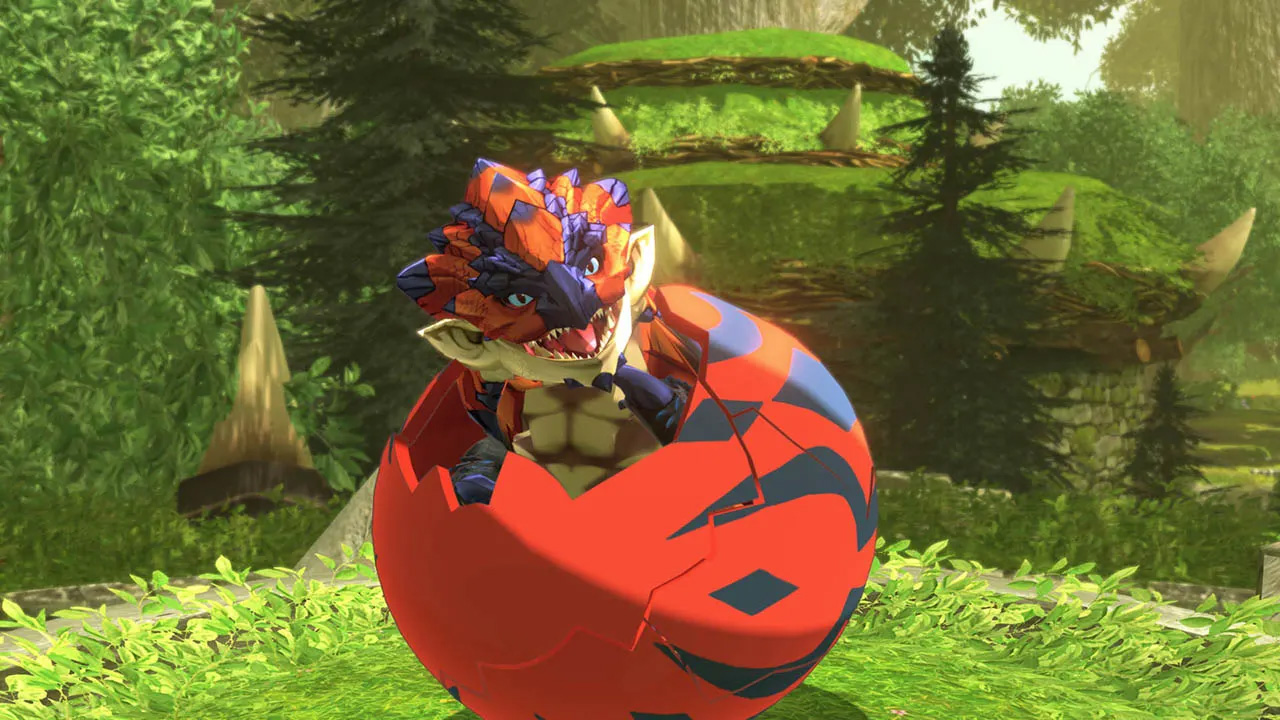 Thanks to an old legend, certain characters believe the egg and the Rathalos inside of it are somehow tied to the mysterious pits, and their pursuit of the egg kicks off a grand adventure across the entire world. While you play as the Rider you are accompanied by some new and old faces throughout the adventure – the Wyverian Ena and Navirou, the returning reliable Felyne, are near-constant companions, and various characters from the different regions you visit will also join in as Battle Buddies and assist you as you fight monsters alongside your Monsties.

The combat system from the first Monster Hunter Stories is largely intact here, with an added focus on depth of combat. The same Power-Speed-Technical attack triangle is in play, where in head-to-head combat Power will lose to Speed, Speed will lose to Technical, and Technical will lose to Power. Almost all monsters you fight now have various parts you can target and break to affect the moves they use, and after doing enough damage the monsters can switch up their tactics, meaning you’ll have to rely on your intuition, experimentation, or experience in order to continue besting them in head-to-head combat.

The only party member you control 100% of the time is yourself, though you can prompt your Monstie to use specific special skills, while battle buddies and their Monsties are entirely AI controlled. It’s the same combat system on the surface, but more in-depth part-breaking and the addition of battle buddies really increased my enjoyment of each battle over the simplistic and sometimes random-feeling battles of the first game. 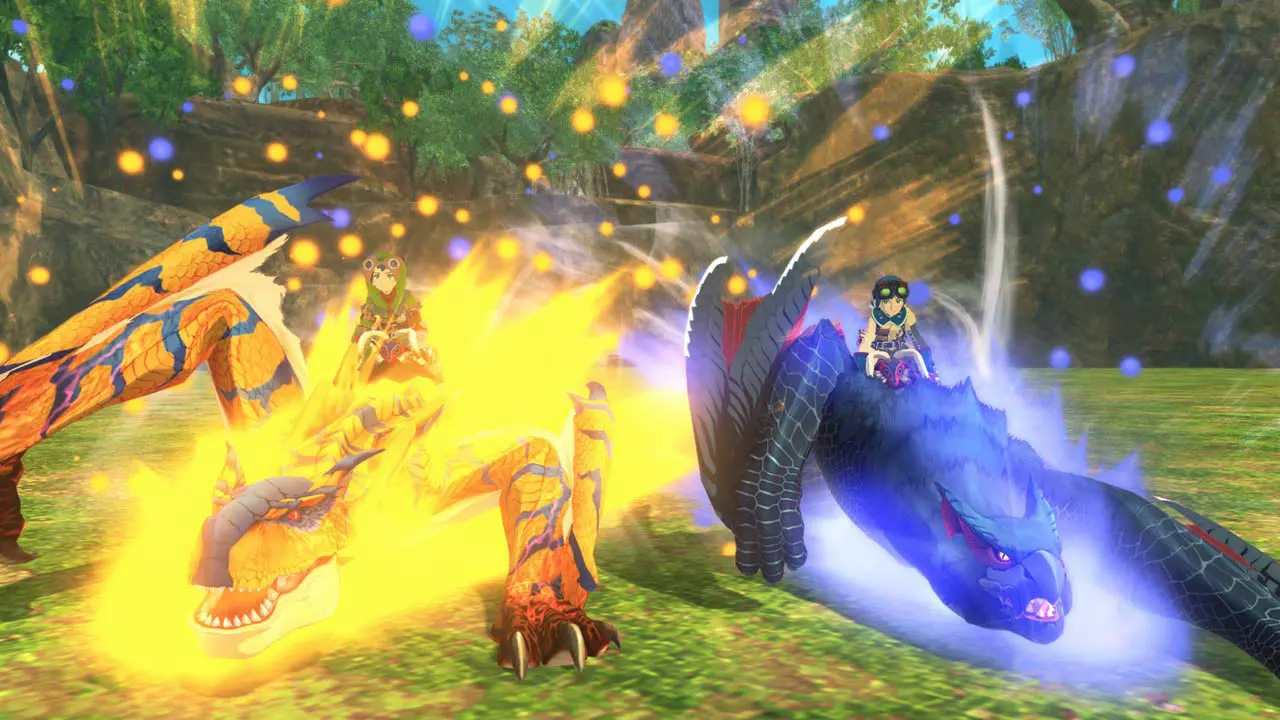 The difficulty of the battles in Stories 2 scales pretty nicely as well. Your Battle Buddies are each stronger than the last, they frequently have weapons that seem to have an elemental advantage against the stronger monsters in the area, and their AI seems pretty smart overall, though it isn’t perfect. Also, as you hatch newer Monsties to use later in the game, their experience points will be ramped up based on how far ahead your characters and other Monsties are, letting them easily catch up to your party without unnecessary grinding. You also, of course, get access to stronger equipment as you beat stronger and stronger monsters throughout the game, helping you take on harder and harder battles.

Despite the pretty smooth difficulty ramping, there was one battle that did throw me for a loop very late into the game. While I can’t exactly go into specifics, I can say that the final boss was very difficult for me to beat, and it took upwards of ten frustrating attempts (and several of my stashed healing items) for me to learn the patterns of the fight well enough to stay alive until the end. To be completely transparent, I may have been a little underleveled for the fight due to rushing through the game a bit, but for comparison, none of the earlier bosses were able to completely knock me out before I toppled them.

Speaking of battling with your Monsties, plenty of fan-favorite monsters are also present in Monster Hunter Stories 2, with several of them available as rideable Monsties. You hatch them from eggs that you’ll find in Monster Dens, with each Monstie having a unique set of genes in a bingo-board format that determine its skills and elemental affinities. Given all of the different possible Monsties and their different gene combinations, finding eggs in Monster Dens is an experience you can definitely find yourself getting caught up in. I don’t know if I can count the times I blew off the main story in order to explore yet another Monster Den in search of a new egg to hatch, whether for the Monstie inside or for the genes I could transfer to my existing Monsties in order to improve their stats, but I had built up quite a collection of monsters that I loved by the end of the game. 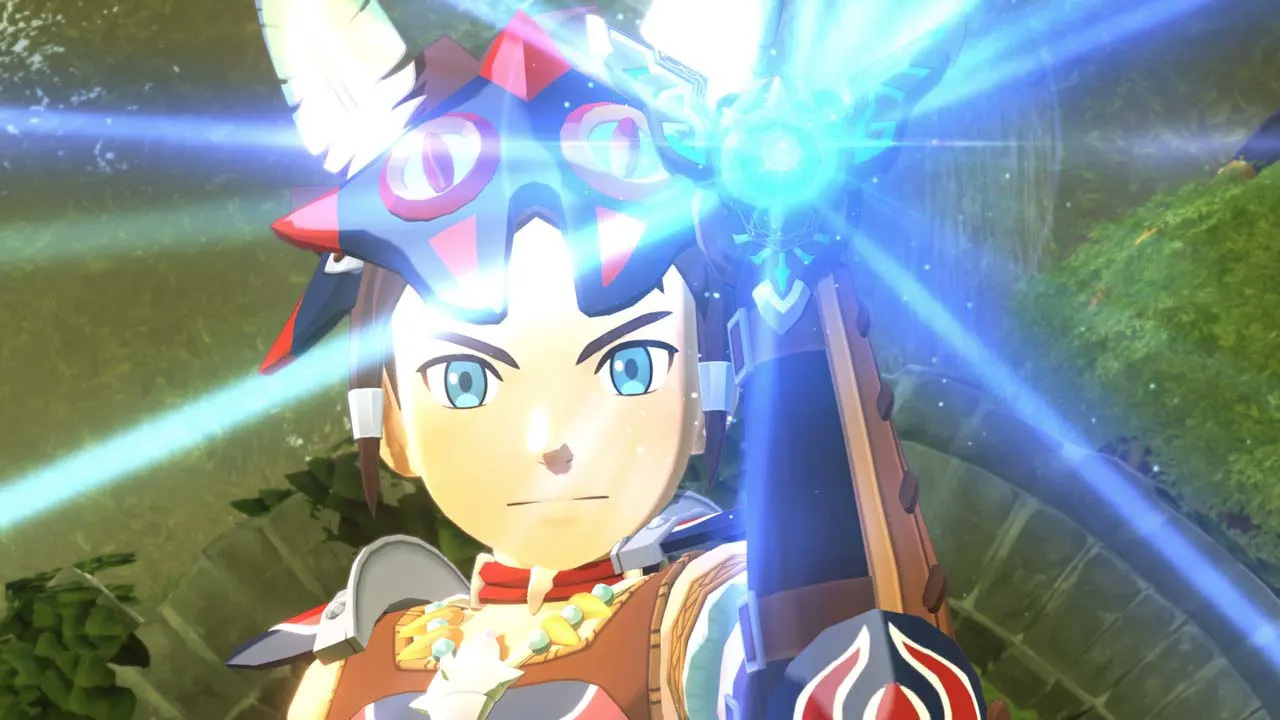 Monsters aren’t only good for stealing eggs from and raising to fight alongside you either – in classic Monster Hunter spirit, you also get to use the parts from Monsters you’ve defeated to craft weapons and armor that you can then use to take down stronger and stronger monsters. It’s obviously less active hunting and more beating up the monsters you find through turn-based battles, but I still had a blast spending a big chunk of time hunting down Zinogre in order to craft the world’s raddest-looking guitar. With the way the team wove traditional franchise mechanics into an entirely different genre, it’s very apparent that while Stories is definitely an RPG on the surface, at its heart it’s still Monster Hunter through and through.

Despite being a sequel steeped in Monster Hunter mechanics, anyone looking to get in on the action without having played the first Stories or any other Monster Hunter game should still be able to enjoy Monster Hunter Stories 2 without any trouble. The gameplay is easier to understand than a traditional entry, and the story stands alone just fine. While various characters from the first game do return throughout the story, enough of their backstories and relationships to one another are explained through the course of Stories 2 that no one should feel lost. The story that Wings of Ruin tells is pretty great, and although it does lean a little hard on certain tropes, there were plenty of story beats and character moments I genuinely enjoyed. 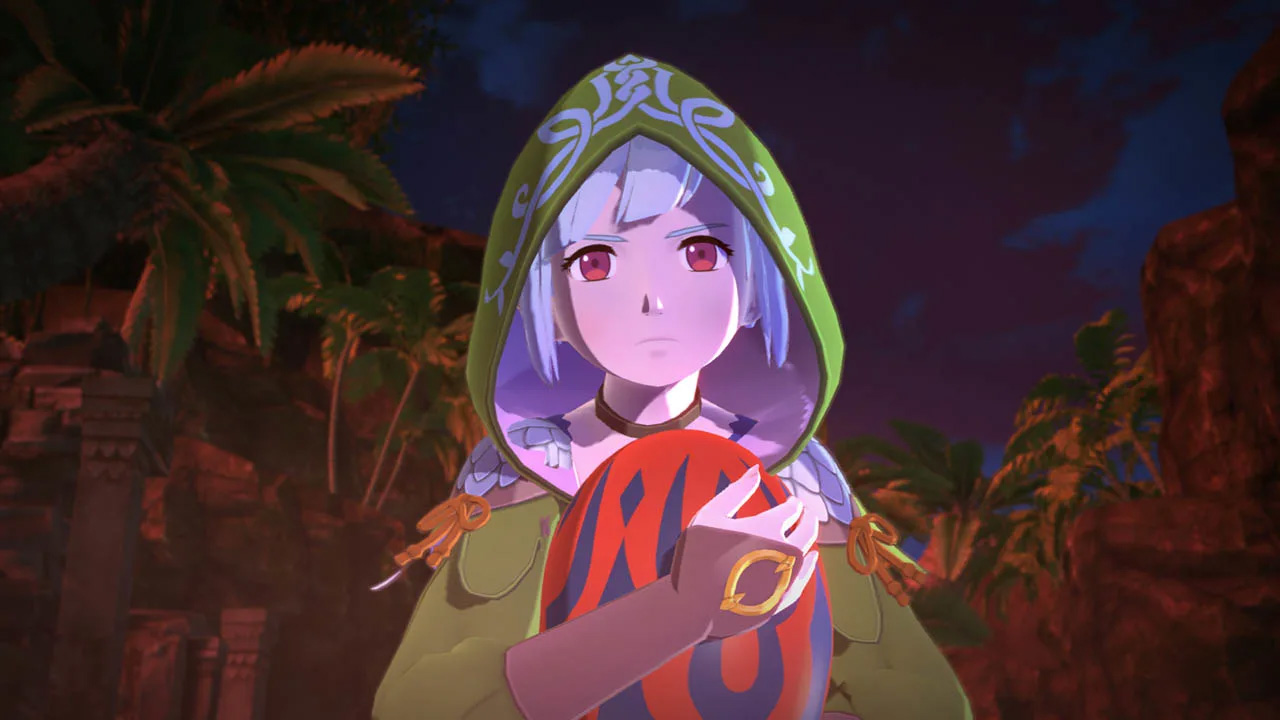 A lot of the dialogue, on the other hand, is not going to win any awards. This is mainly due to Navirou and his tendency to insert terrible cat-puns into nearly every sentence and, much like in the first game, Navirou has to act as a mouthpiece for the mostly silent player. He’s also very prone to repeating the dialogue of other characters back at them in the form of a question, especially when it involves new pieces of information that the game really wants to drive home.

Navirou’s antics aside, however, the cast of characters in Monster Hunter Stories 2: Wings of Ruin was very impressive. I became very attached to almost all of the Battle Buddies over the course of the game, due in large part to the fact that character designs were phenomenal and stylish, in true Monster Hunter fashion, and also thanks to the voice cast doing their job extremely well. Character development is another area that I felt shined, with great examples of mentor/mentee dynamics, overcoming feelings of self doubt, and struggling to understand those that are different from you. Would some of these themes worked better had the player character not been a silent protagonist? Absolutely, but it worked well enough despite the game having to present the protagonist’s feelings through facial expressions and other characters essentially monologuing on their behalf.

In the performance department, Monster Hunter Stories 2 is a huge step up from its predecessor, which was possible due to the jump to the Switch from the 3DS. The world feels bigger and the character and monster models are more detailed, making the whole thing look a little less chibi-fied and adorable than the first game, but the inherent, brightly-colored style of Monster Hunter Stories is still intact, and the aesthetic is definitely as pleasing as ever. 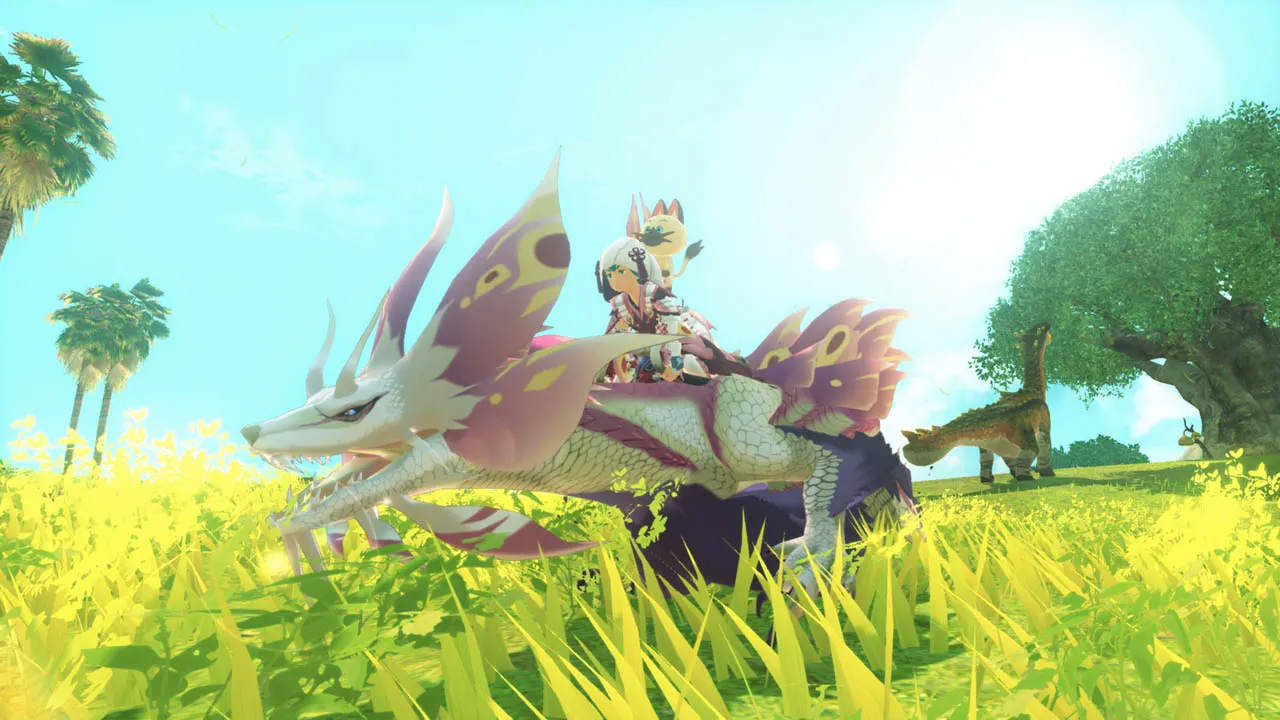 The game’s frame-rate does seem to be pretty unstable, especially in cutscenes, though it was far from unplayable and seemed to mellow out (or at least became less-noticeable to me) the further I got into the game. I did have the game crash on me just once, at perhaps the most inopportune time imaginable. Remember that difficult final boss fight I mentioned earlier? The first time I finally conquered it, the game crashed near the end of the cutscene following the fight, without saving the clear data. I loaded the game back up to find myself standing where the game had last auto-saved, right before the final fight. It was only a one-time occurrence – when I finally beat the boss again after a few more attempts the cutscene played all the way through just fine – but considering the ordeal that I felt the final fight was, it was definitely a sour note in my otherwise wonderful experience with Stories 2.

I fell in love with the first Monster Hunter Stories, and that led to a renewed interest in the Monster Hunter series as a whole. I never dreamed we’d be getting a sequel, let alone one that would improve on the original as much as Wings of Ruin did. The fighting feels less tedious than before thanks to the addition of Battle Buddies, and it’s clear, once again, that the team put a lot of time and effort into making what people love about Monster Hunter work as an RPG. More Monster Hunter in the hands of more people is never a bad thing, and thanks to stylish and memorable characters and loveable Monsties, in addition to a solid roadmap of upcoming content, I think Monster Hunter Stories 2: Wings of Ruin is going to bring a lot of people into the fold.