The original release of Kingdoms of Amalur: Reckoning was all the way back in 2012. The fantasy action-RPG featured a vast open world, a stellar soundtrack by Grant Kirkhope, and told the tale of a world whose inhabitants were cursed by fate itself to fail and die, with no hope or chance of changing the outcome of their lives. Unfortunately, much like the denizens of Amalur, the game itself was fated to quietly release between Skyrim and Mass Effect 3, ultimately becoming nothing more than a cult classic in its time. Thankfully, much like narration in the game’s opening cutscene states of the world of Amalur, the fate of this fantasy adventure may not have been permanently written.

Kingdoms of Amalur: Re-Reckoning has officially been released for the Nintendo Switch, but how does this port of a remaster fare on Nintendo’s hybrid?

At a glance, Kingdoms of Amalur can seem like a run-of-the-mill fantasy RPG with big forests, magical elf people, and dwarves all in contention with humans and mystical beasts. However, once you start actually digging into the game, it’s very clear that this universe is telling its own story and has its own identity. Nowhere is this most evident than with the games lore and characters. Everywhere you go there is someone to talk to, something to read, and side quests to partake in. Each one sets up more and more of the world’s ethos and lore in such a way that you’d be forgiven for thinking this series was based on some sort of pre-existing epic novel.

The characters in this world are incredibly likable, and that’s thanks in no small part to nearly every line of dialogue being voice acted — from shopkeepers to supporting cast characters, the only person who doesn’t have a voice is you. By the time I reached the game’s midway point, I regarded the game’s main supporting cast in a similar way as I have my companions in Mass Effect games. Now, their characters aren’t developed to the same extent as those classic BioWare party members, but the main cast is well done, well acted, and genuinely likable. I want to see them happy and safe! 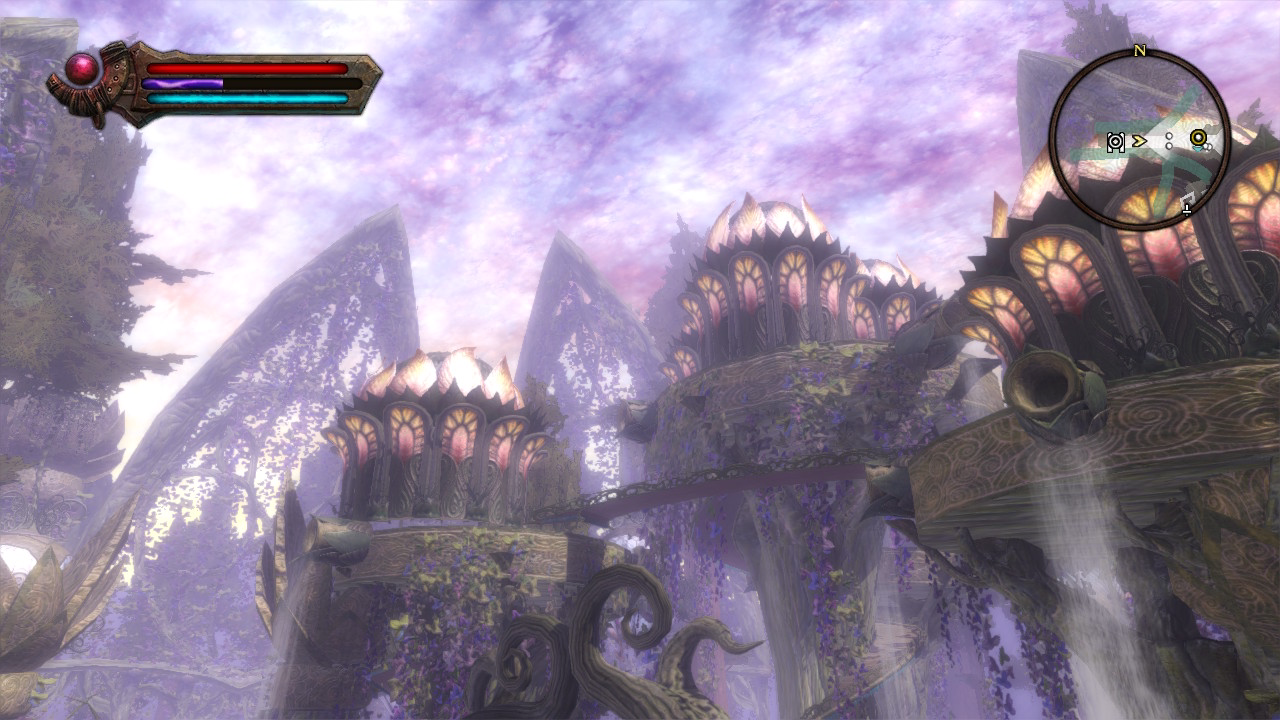 That high watermark of character likability can also be said of the world itself and its associated subplots and lore. At the outset of my adventure, I genuinely didn’t care for the lands of Amalur — it was large, intricate, and downright overwhelming. As the story progressed, however, I wanted to know as much as I could of this world and cared about what would become of it should my friends and I fail in our fate-defying quest.

It’s not all deep lore dumps and character growth, though, as the bulk of your time will be spent plunging your blades into all manner of vicious beasts while igniting villainous bandits with a wave of your hands. Thankfully, getting your hands dirty in the world of Amalur is an absolute blast. From flaming chakrams and icy staves, to poisoned bows and magic spells, there’s a weapon and playstyle for Just about any RPG fan. From being a sneaky alchemist assassin to a grand battle-mage blacksmith, it’s all there. With such a varied arsenal, I was a little concerned with how dense the item inventory would need to be to facilitate it. I was relieved to find that both the player’s inventory and shop inventories are well organized, with the ability to open and collapse particular sections and even mark old gear and items as junk to sell at once when you’ve returned from your latest side-quest. 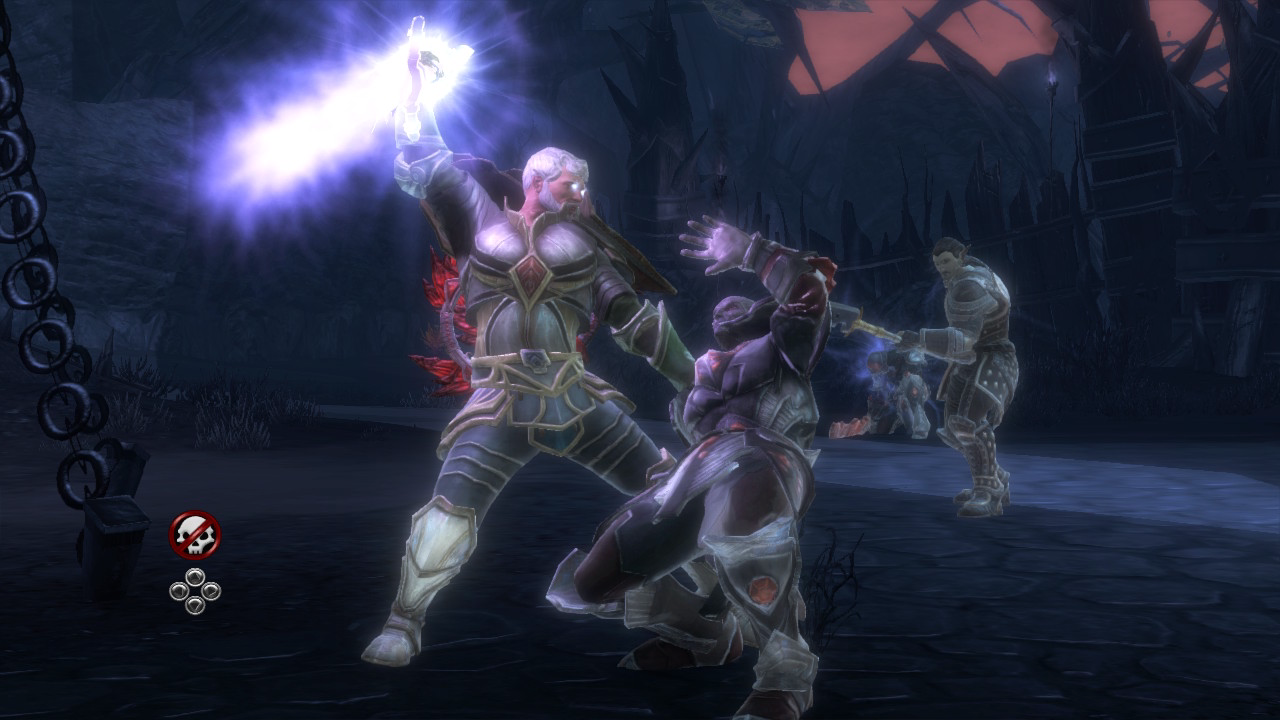 While the combat has a nice weight to it and the Fate-meter-empowered finishers are incredibly fun to use, the games camera can prove be a bit of an issue at times. Rather than having a lock on mechanic when facing multiple enemies, the game instead zooms the camera out and focuses on whichever enemy is the closest. While this system serves to keep combos flowing and enemies reeling, it can be a bit frustrating when a weakened enemy you want to finish off is further outside of the pack or happens to wander off screen. This can lead to the combat feeling a bit all over the place at times, especially with fast moving opponents, which led me to essentially only use AOE weapons such as the chakrams and Fae blades. Overall though, the combat is exciting, fun, and as varied or as simple as you’d like it to be.

Peer into the tapestry of Fate

Re-Reckoning launched for all other major platforms late last year, and it was a decent sprucing up to an already decent-looking RPG considering its scale and age. Unfortunately, the Switch version of this remaster isn’t as shiny as its counterparts on Microsoft and Sony’s last-gen systems. The game runs fairly well overall, with a few exceptions such as slight frame drops when using AOE attacks on groups of enemies, or while taking on large groups of enemies that use magic. The latter of which can lead to brief (yet severe) frame drops that make the game move almost in slow motion. In the late game, this can be a death sentence if you happen to take on a large group of enemies that are significantly stronger than you, with the frame drops making it essentially impossible to dodge out of the way of their ranged attacks.

For the most part, however, the game does consistently run at a smooth clip, though that comes at a steep price, with the game looking more in line with its two-gen-old initial release than its six-month-old remaster. By comparison to Re-Reckoning on other platforms, the Switch version’s textures look noticeably muddier, and the lighting seems a bit flat and dull. Now, there are a number of visual enhancements such as character detail and clarity that make it clear that this is indeed the remastered version, it just had to be significantly toned down to run reasonably well on the Switch. 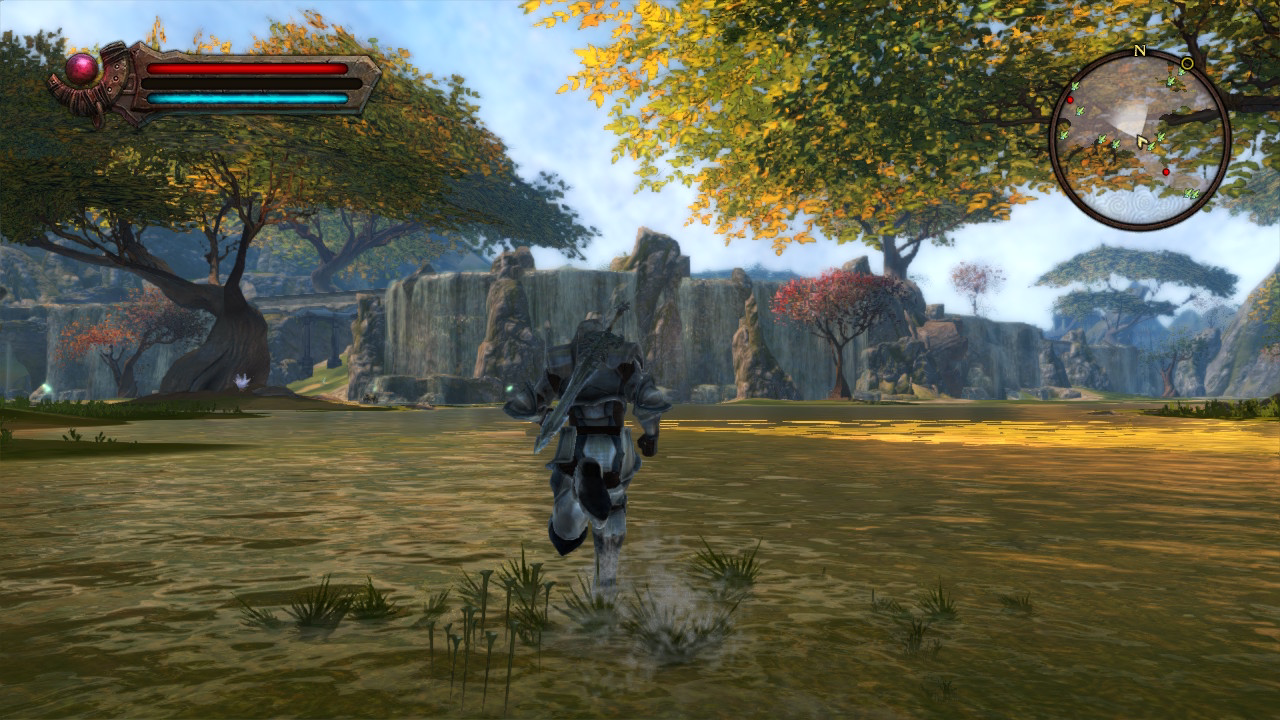 The most noticeable and unfortunate of these compromises to the game’s presentation comes in the form of the audio, particularly the voiceover. Compressing a game’s audio is a tried-and-true method of making a title fit and run on less powerful and spacious hardware, but Kingdoms of Amalur takes it quite a bit further than most. As I mentioned earlier, nearly every line of dialogue is voiced with very few exceptions. The cost of getting that much dialogue to reasonably fit in a Switch title apparently meant compressing the audio of the voice recordings to the point that it can sometimes sound like you’re listening to it over a radio. It truly is a shame because there are some genuinely fantastic performances in the game, and some incredibly heavy scenes can have their weight partially robbed of them when it sounds like the line was recorded off of an AM radio signal.

In spite of these visual and audio flaws, the original release of the game had fantastic art direction that still shines through, with many areas and character designs still looking quite beautiful despite the game’s age and Switch’s hardware limitations. It can’t be denied, however, that the hits to the game’s presentation on Switch does take away from the original game’s impact and grandeur.

Kingdoms of Amalur: Re-Reckoning can be intimidating at first, but if you can get past the opening sections without being scared off by the vast options that are presented to you, you’re in for one of the deepest and most feature-rich RPGs I’ve played in a long while. There’s so much just begging to be explored, and so many nooks, crannies, and catacombs with a story to tell. 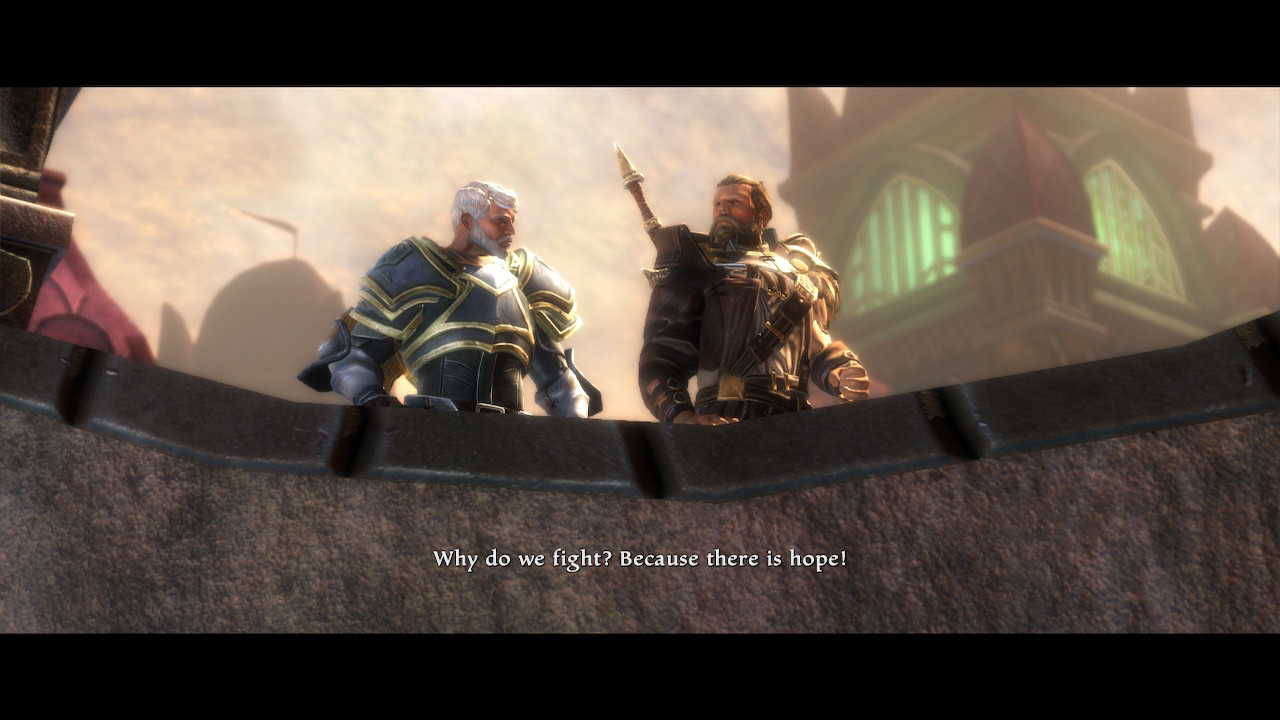 Under its own merits, the game is a solid 8.0 at minimum. However, when looking at the Switch version’s graphical performance and audio fidelity, I cannot fully recommend it over its counterparts on other systems if those are an option for you. In a lot of cases, the Switch’s portability outweighs just about every concession that has to be made for a port to work, and a deep RPG like this does benefit greatly from said portability. Yet in a game so focused on its world and characters, the issues with the muddiness of the visuals and compressed audio make it a hard recommendation if you have a more powerful console or PC.

That said, if the Switch is your primary platform and you’re looking for a deep RPG that you can potentially sink hundreds of hours into, then there are few games of the same caliber and depth as Kingdoms of Amalur: Re-Reckoning. It was a hidden gem in its time, but much like the game’s protagonist, it didn’t stay down. Here’s hoping this second lease on life rewrites fate and this fantastic game gets the attention it deserves. 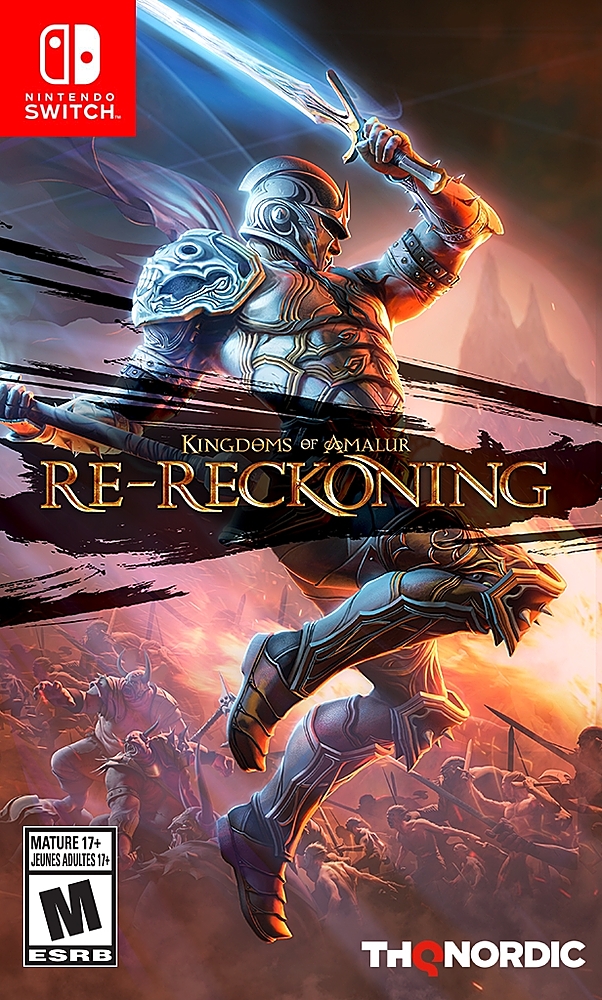