Final Fantasy is a franchise well-suited to spin-offs, so it’s no surprise that it received the kart racer Chocobo Racing way back in 1999 for the PlayStation. Surprisingly, despite being a solid concept, that game was the only time it was attempted (unreleased 3DS games notwithstanding).

Thankfully that’s changed with the release of Chocobo GP exclusively on Switch, which melds the aforementioned game’s adorable art style with over two decades worth of kart racing goodness to look to for inspiration.

Fundamentally, Chocobo GP is as standard a kart racer as they come. 3 laps, 8 characters on the track, boost pads to cross over, drifting, tricks, a variety of items to aid you or hinder opponents… Sure, it all has a Final Fantasy coat of paint, but fundamentally it doesn’t do much to shake up the formula. That’s not necessarily a bad thing, however, so long as the game plays well, and I’m happy to say Chocobo GP is a great time… in short bursts. 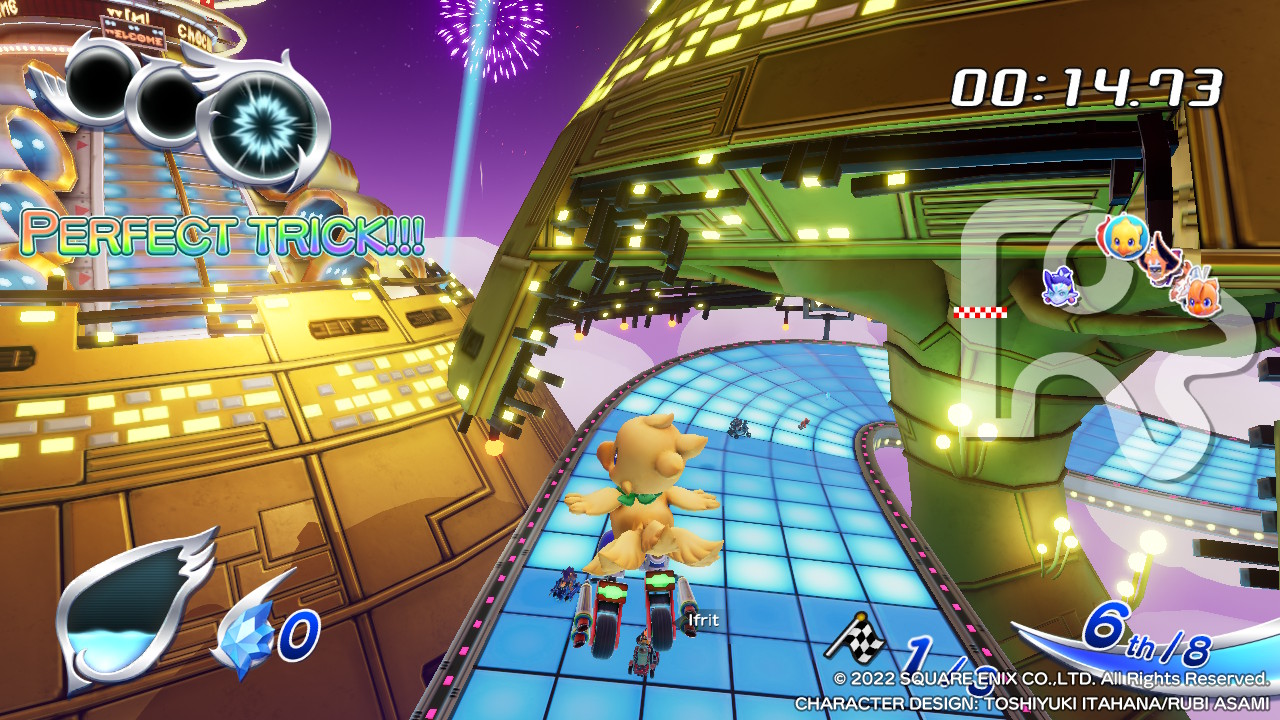 In terms of controls, Chocobo GP is tight, almost to a fault. Like most kart racers, each character and vehicle has stats, but in the case of GP they feel a lot more important to account for, with each handling noticeably differently. More than once I wound up bumping into walls if I was unfamiliar to someone’s turning radius. Similarly, each has a unique ability of their own that fills up over the course of a game, letting you unleash a powerful boost and unique offensive or defensive skill. Square Enix pushing the game like an eSport makes sense when you consider the likelihood players will find their own “main” if they stick to it.

This eSports push is very noticeable in the game in various other ways, too. The core mode, which the main menu defaults to, is the titular Chocobo GP, an online-only tournament event where you’ll rise up the ranks. A season pass is also planned, along with microtransactions to more easily “level up” to get more rewards. While the latter wasn’t live as of this writing, I can’t imagine fans will be thrilled with the concept of spending a lot of time/money to unlock their favorite characters after launch. 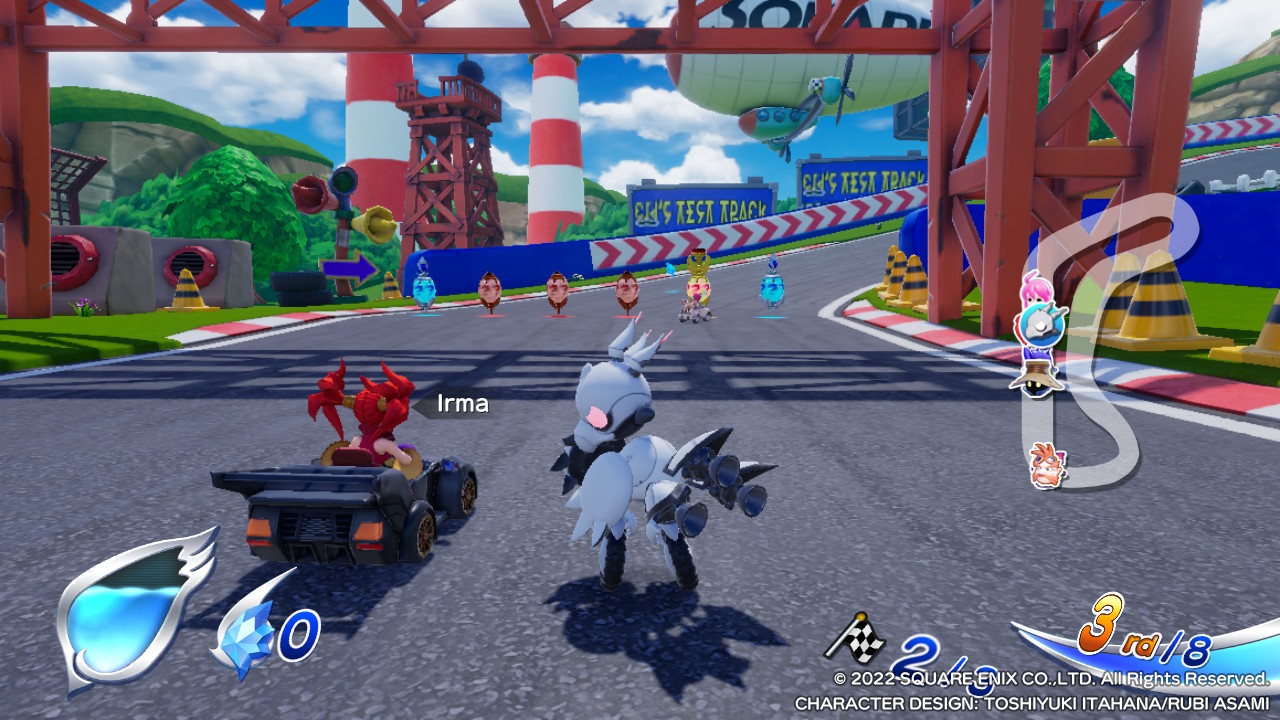 The game’s other modes are more standard for the genre. Versus play, time trials, and more traditional “Series Races” (aka “Cups”) are available, although frustratingly playing these won’t award you with the standard shop currency – Tickets. You can only grab those through playing through the GP or the story mode, although the latter does give you enough tickets to grab most of the unlockable characters without needing to grind.

Luckily the story is well worth diving into, too, with it arguably being the game’s strongest part. It spans multiple chapters featuring a boatload of fully-voiced characters, each delivering a level of fanservice that very nearly puts World of Final Fantasy to shame. Mechanically it serves as a tutorial, slowly giving you access to the various items (called Magicite) so you have time to get familiar with their quirks.

Don’t expect a dramatic story, either, as goofy shenanigans are the name of the game. Every problem is solved with racing, Atla the moogle is constantly breaking the fourth wall, Shiva has a smartphone… While the comedy can be hit or miss, especially when it delves into franchise deep-pulls or Japanese variety show-styled slapstick, it got a solid chuckle out of me a few times. 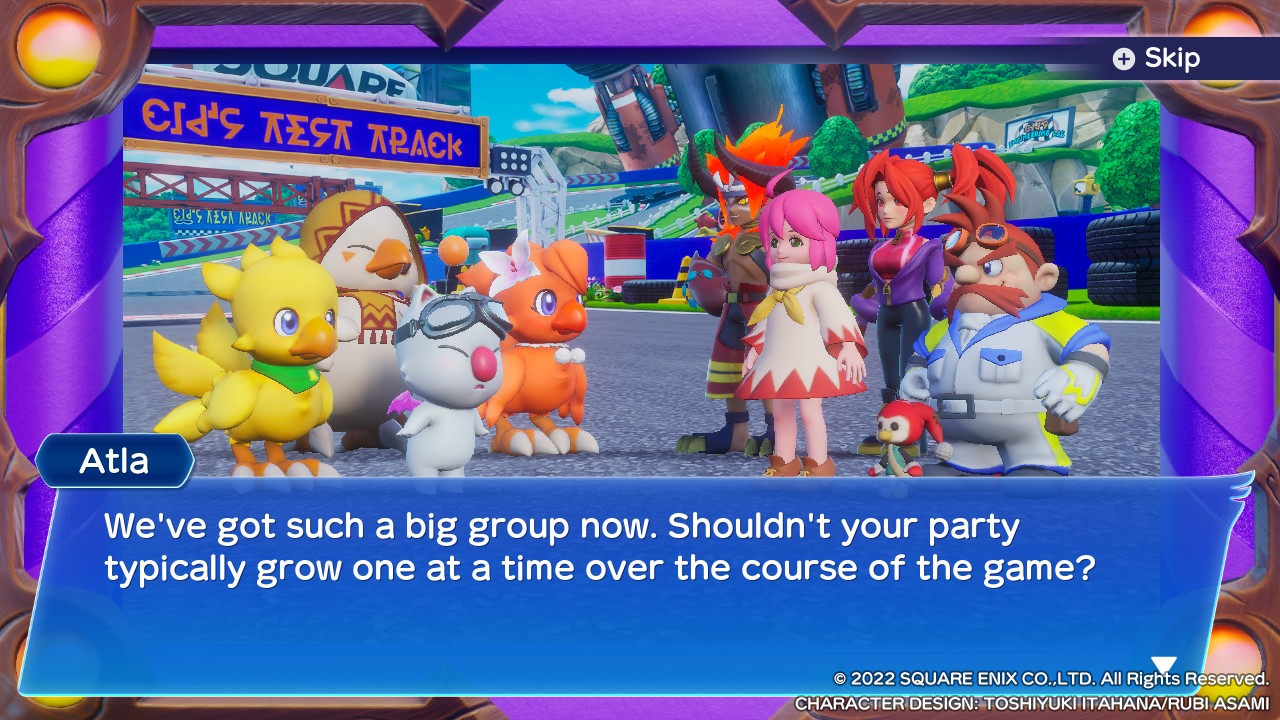 I’d be remiss not to mention the music as well. The race tracks themselves feature amazing remixes that get you amped up, with Battle on the Big Bridge in particular featuring a very satisfying segue into the Chocobo theme at one point, but it’s also worth noting the various tunes that pop up during the story cutscenes. The enigmatic Racing Hero X, for example, is accompanied by Final Fantasy VIII’s Man with the Machine Gun every time he appears.

The main menu theme could prove more divisive, as it’s a very silly but catchy vocal tune which has an entire part devoted to naming the Final Fantasy summons. Every time you back out to the main menu you’ll be hearing it, so depending on your tolerance for the audible equivalent to a spoonful of sugar you might want to put things on mute until you’re in a race.

Getting back to the fanservice, Chocobo GP takes the opportunity to shine the light on some often underrepresented parts of Final Fantasy’s history. Nowhere is this more apparent with the Final Fantasy VI choices. Sure the main character Terra is here, but she’s in her Trance form and riding Magitek Armor. It being an alternate universe also allows her dad, Maduin, to not only be alive but also be a cheesy doting father. And the racetrack? Why, it’s Zozo of course, a relatively minor town from the original game. 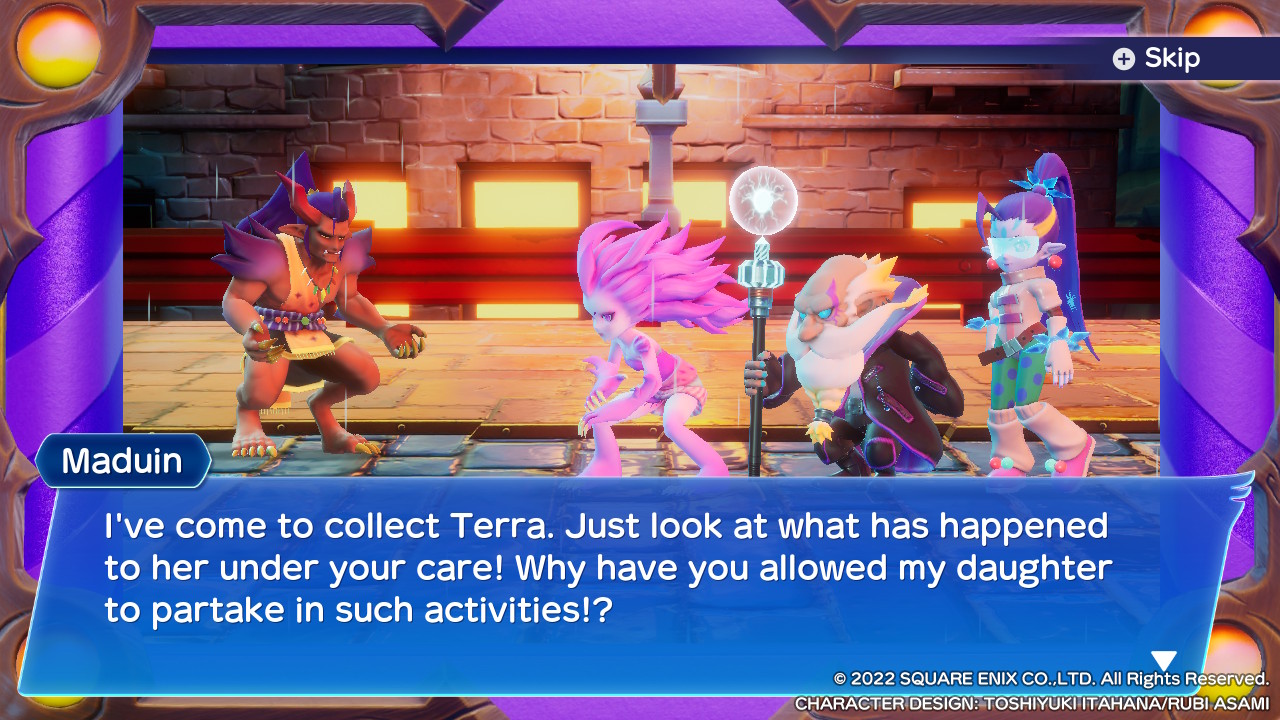 Final Fantasy IX is another gem that gets quite a bit of love, with Vivi and Steiner being racers and various Alexandria setpieces being the backdrop for a track. It also marks the first time Steiner has received an English voice actor in Crispin Freeman and it works really well. Potentially more distracting is Vivi being Kath Soucie – if you grew up watching Rugrats, it can be a little weird to hear the voice of Phil & Lil coming out of the iconic Black Mage.

Fans who want more famous characters to play as are in luck, too, as both Squall and Cloud Strife will be added at launch through the aforementioned Season Pass, though that leads to a major point of contention… The game’s lack of content at launch.

Have you kept up with Chocobo GP’s pre-release trailers and news tidbits? You’ve seen practically everything the game has to offer outside of a single track, a few variations of the others, and two playable characters. That wouldn’t be a problem, no one exactly comes to racers for the surprises, but when the pre-release showing was so sparse, it was disappointing to see how little there is to experience in the game. What could be a fantastic celebration of Final Fantasy’s history ends up feeling like a cliffnotes recap that’s missing half the pages.

It doesn’t help that the game’s tracks are fairly short, too, with only a handful feeling comparable in length to those seen in Mario Kart. This could well be a deliberate choice to better suit the GP mode’s structure, but it does lead to the results of certain races feeling more down to luck than any level of skill, and it means the gameplay parts of story mode go by in a flash. 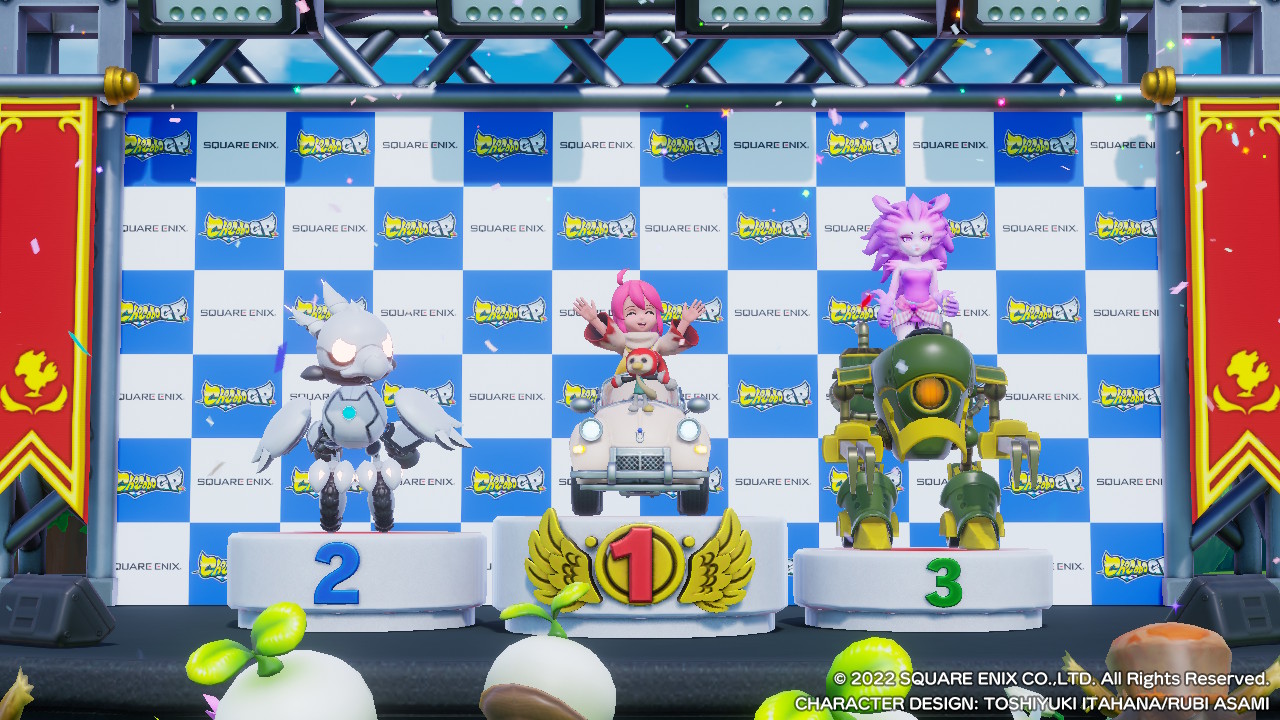 It’s worth noting that this review is written for the game as it stands at launch. There’s every possibility it will get much better, or much worse, as elements like the Season Pass are implemented. I can only hope the former’s the case, as right now, Chocobo GP stands as an enjoyable-but-basic racer that I’d only recommend to Final Fantasy fans. 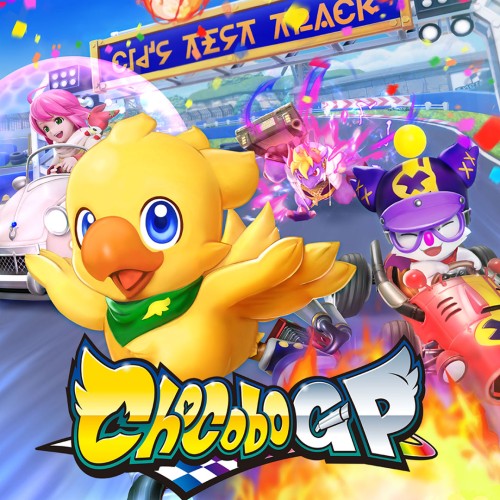