Few things can compare to the excitement of one of your favorite games coming to Nintendo Switch. The portability, the flexibility of play: the Switch is the perfect port machine. When I heard Apex Legends was on its way, I was a bit hesitant — I’m a mouse-and-keyboard kind of guy when it comes to first-person shooters — until I learned it would include gyro-aiming a la Paladins and Fortnite. Then came the revelation: I could play my Apex file on-the-go. Then, the anticipation: I could play my Apex file on-the-go and I won’t be super terrible because I’ll have gyro-aim.

And then, upon release, came the disappointment.

This is by far the worst way to play Apex Legends. 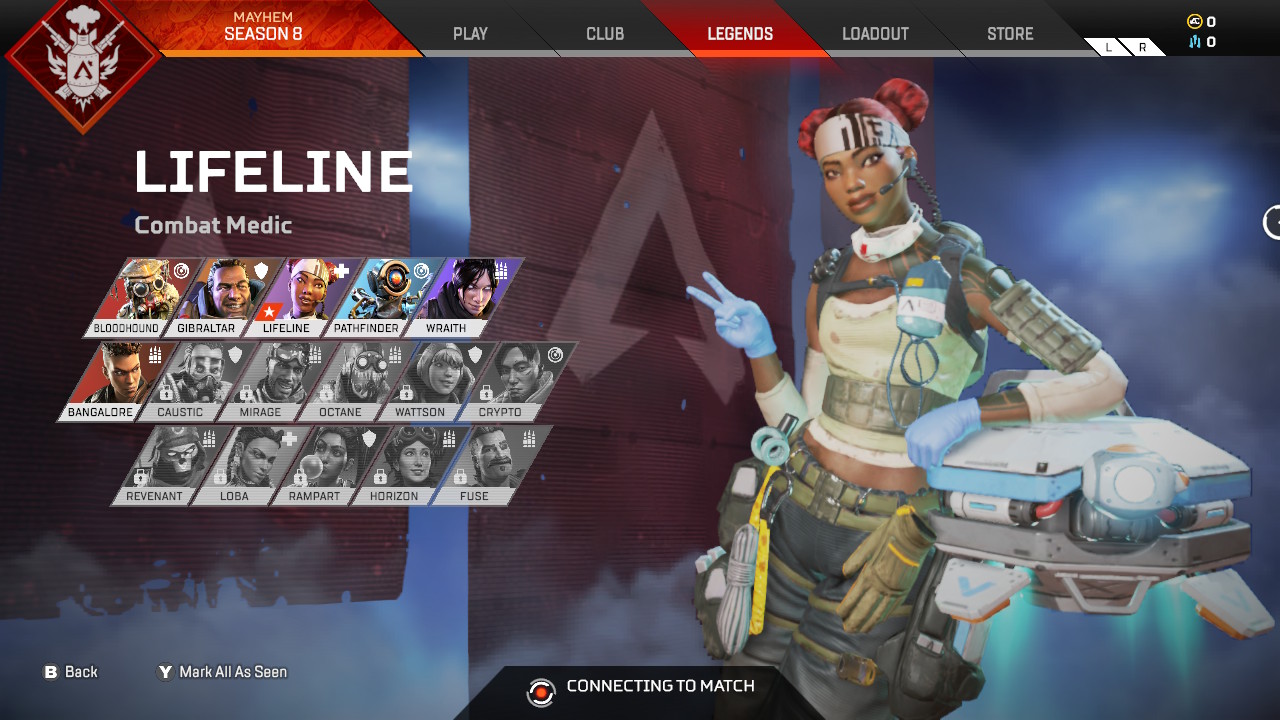 Apex Legends is a free-to-play battle royale shooter in which 60 players — in teams of two or three — drop from a plane onto one of a handful of maps and fight for survival. Loot, ranging from weapons to armor to ammo and upgrades, can be found across the environment in chests, on defeated opponents, and scattered on the ground. Each of the game’s 16 “Legends” has their own unique abilities and ultimate powers; for example, Mirage can create holographic duplicates of himself to fake other players out, while Loba can open up a local “black market” for teammates to easily get nearby loot from without having to search for it. Every character is great and dripping with personality, and I have to give Respawn props for the sheer diversity of the cast. Nearly every corner of the globe is here in some way, and there’s even some LGBTQ representation in a few Legends.

Content is doled out over various seasons and limited-time events. As of the time of writing, Apex is currently on its eighth season, which brought 100 levels’ worth of outfits, sprays, emotes, weapon skins, and more, as well as the new character of Fuse. Players can purchase the premium Battle Pass to unlock even more content by playing and completing challenges, but they can also earn free rewards without spending any money (albeit there aren’t as many). There is a lot of content in Apex Legends, so collectors beware: you’ll probably be emptying out your wallet quite a bit if you’re committed to getting everything. 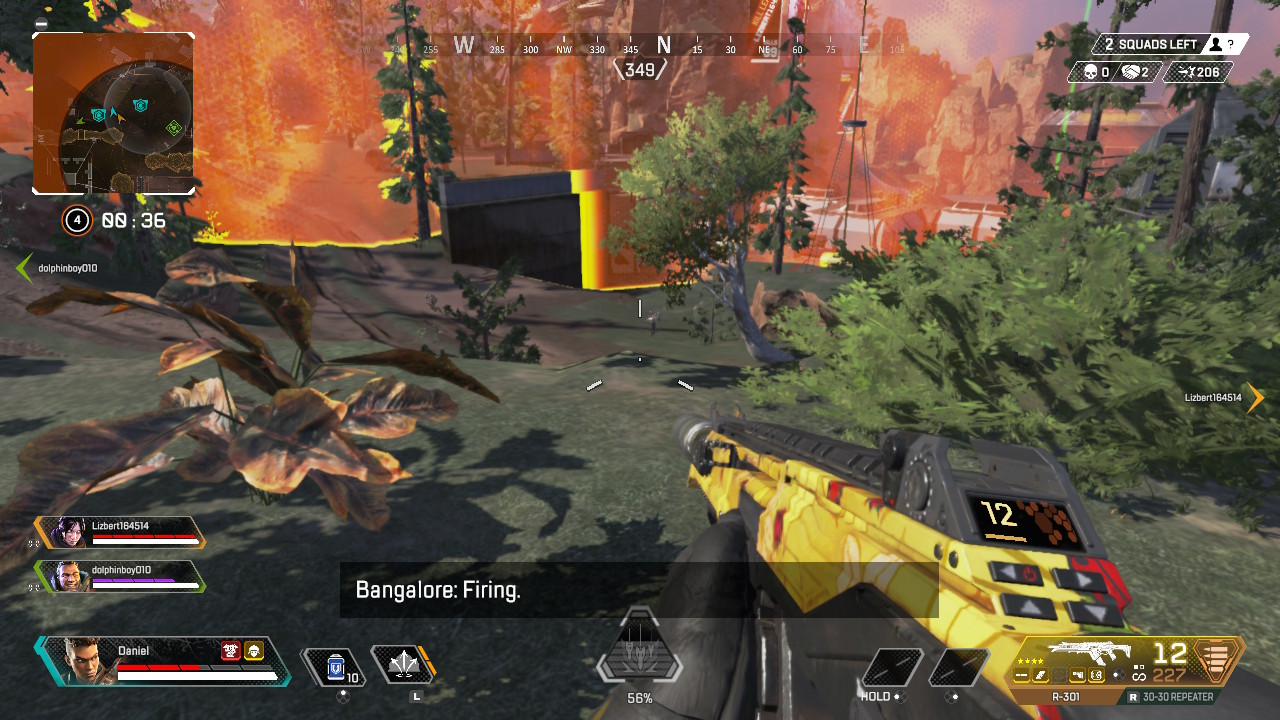 While the game — on its surface — plays the same as any of its other versions, this is where the Nintendo Switch version’s faults really start to bleed. You run, you shoot, you kill, and you make it to the very end of the match while escaping an ever-shrinking storm (think Fortnite: Battle Royale or Spellbreak). If you’re the last squad standing, you’re declared Champion and Apex Legend and earn bragging rights ’til the end of your days — or just the beginning of your next match. However, while gunplay is normally a highlight of Apex, it’s atrocious on Switch.

I play on PC, so coming to Switch was a bit hard for me — especially without a keyboard and mouse. The motion control implementation, while sounding great in concept, is a broken mess. Horizontal aiming is on the wrong axis, so to move, you have to literally turn your Switch or Pro Controller like a steering wheel. While this may work fine for detached Joy-Con, it’s nothing but cumbersome with any other set-up. Sensitivity scaling is also insane, with anything over 2.5 sending your camera flying in every which direction with even the slightest of breezes. Oh, and the menu is actually broken, so it’s impossible to actually get to the gyro options while using it normally.

You can’t scroll down to the motion-control options for some buggy reason; I was only able to access them once I realized you can also move an on-screen cursor to get around. 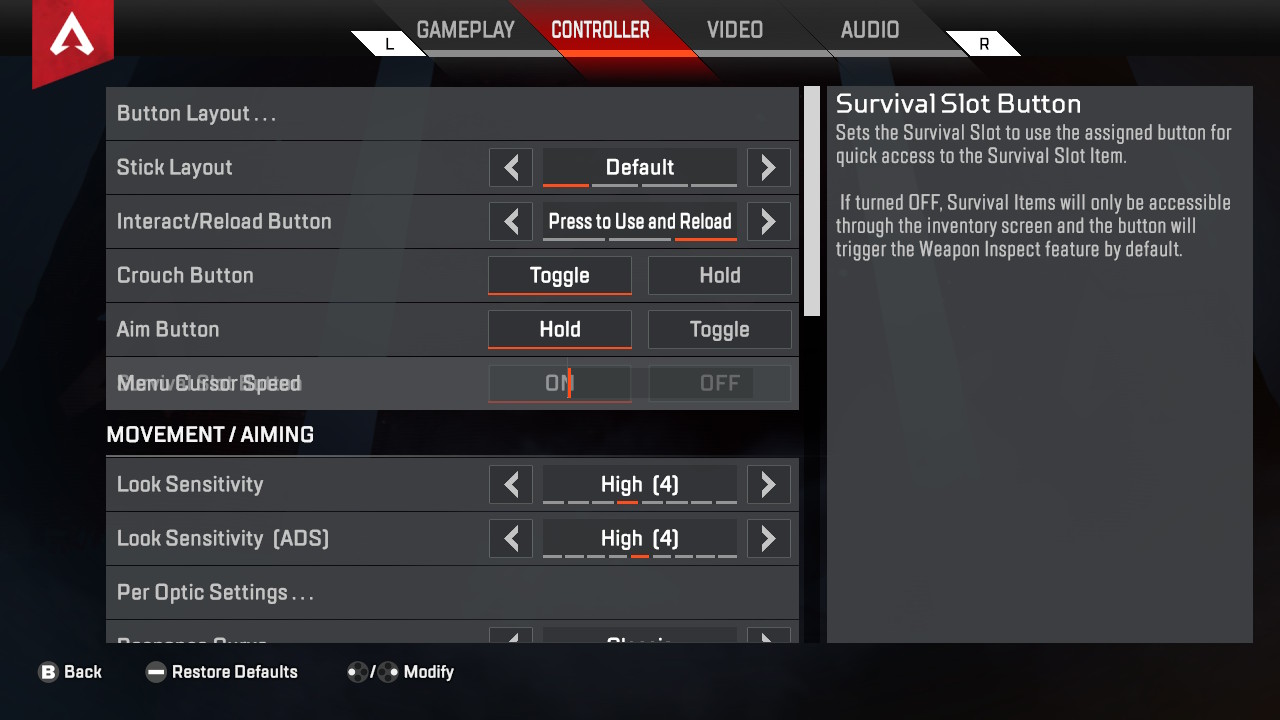 See the “Menu Cursor Speed” option that’s weirdly chimera’d with something else? You can’t scroll past that.

If the gyro wasn’t a hindrance to the gameplay, there are also the terrible frame rate and pop-in issues — which I’ll get to in a bit. Ultimately, a lot of the time I felt like I was fighting with the game rather than my opponents. If it wasn’t my aim being trash thanks to the poor motion control implementation, it was everything stuttering for a few seconds, making me lose key time and — consequently — my character’s life.

If you can get past all that, though, then Apex Legends’ gunplay is still — at its core — really great. Fighting alongside your team feels really rewarding, especially when you take down an especially aggressive set of enemies against all odds. Team communication in Apex Legends is a must — which is unfortunately why developer Respawn Entertainment has yet to implement a permanent Solo mode. But if you’re like me and despise talking to strangers through voice chat, Apex Legends has a revolutionary “ping” system that intelligently notifies your teammates about anything you hit the “R” button on. See an enemy in the distance? Hit “R” and your character will tell your squad, while the game places a red target over where you saw them. Found some ammo a teammate can use? Ping it. What about a direction you think your team should go in, or a location you want to stake out? You can ping that, too. It’s one of my favorite things about Apex: being able to easily communicate basically anything to your team without getting sweared at or having various epithets yelled at you. 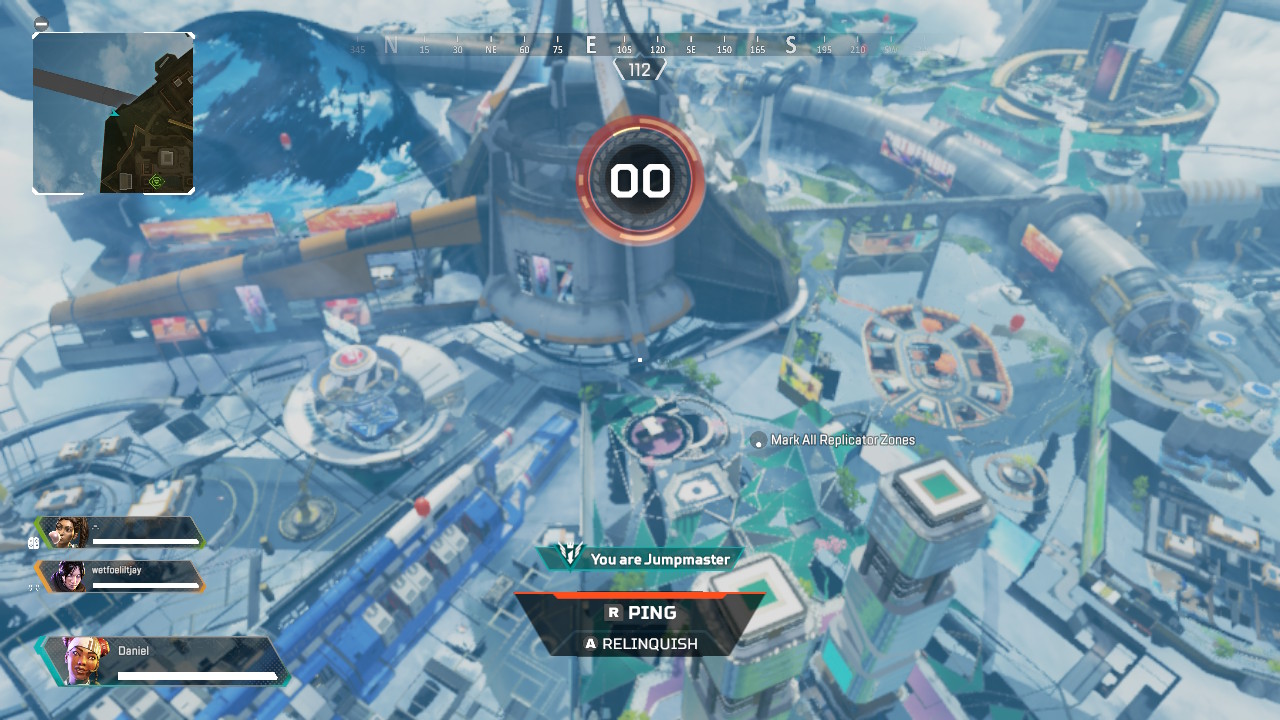 Yeeeaaah, this looks… not great.

If you have the PC, PlayStation, or Xbox versions of Apex Legends and are thinking of making the jump to Switch, I have a fun little exercise that can help you preview what it’ll look like. Grab your TV or monitor or whatever you use to play Apex on and your nearest tub of Vaseline, and then just smear the latter all over it. Really, just coat it like you were basting a turkey. Rub it in — make sure you get the corners, too — and then boot up the game.

No, but really, the game doesn’t look good. It’s blurry, low-res, and suffers from lots and lots of texture pop-ins and outs. The game has cross-play, so sometimes I’d be playing with teammates on other consoles. When they’d ping an enemy in the distance, though, I would oftentimes struggle to see the spotted enemy thanks to the Switch version’s muddied visual output. In a fast-paced shooter like Apex Legends, this is a massive impairment for both the player and teammates, the latter of which will have to pick up the slack for handicapped Switch users.

When jumping into my first game on the Olympus map, I was struck by how many flashing black textures there were during the initial map flyover. In-game, I often saw trees and other objects appear out of nowhere, and while playing undocked, I would notice my Switch really start to whir and heat up. There are lots of frame-rate drops below the target 30 fps, and those coupled with lag make high-intensity matches really frustrating to get through.

I understand the Switch isn’t a powerhouse, and compromises had to be made to get the game running on it, but the whole experience just feels very janky and amateur — like I’m playing a low-budget indie shooter or something.

One nice touch I did notice, though, is that on-screen text is made bigger when playing in handheld mode. It looks a bit… off… but it’s still appreciated given how many other games don’t pay any attention to this detail. 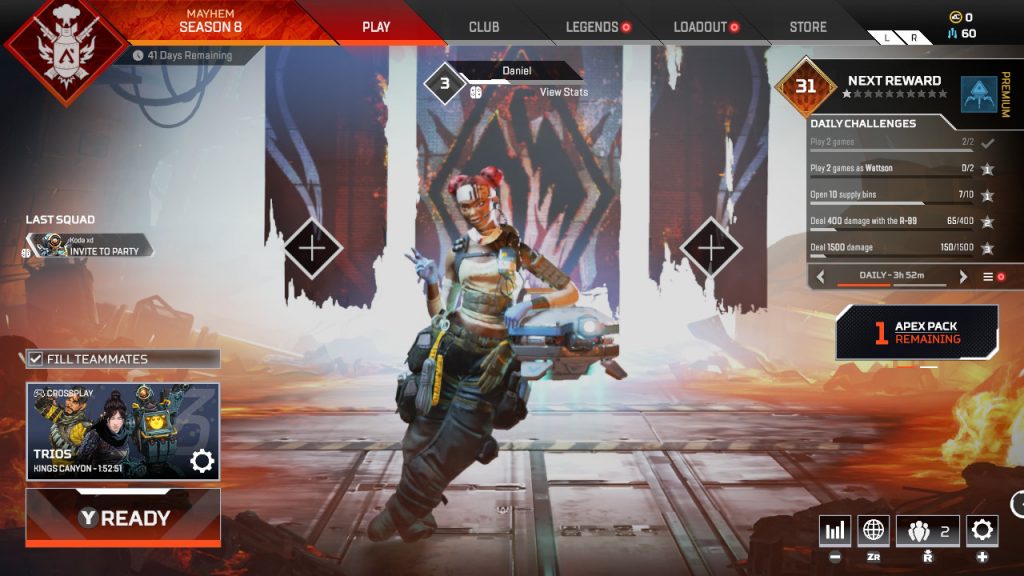 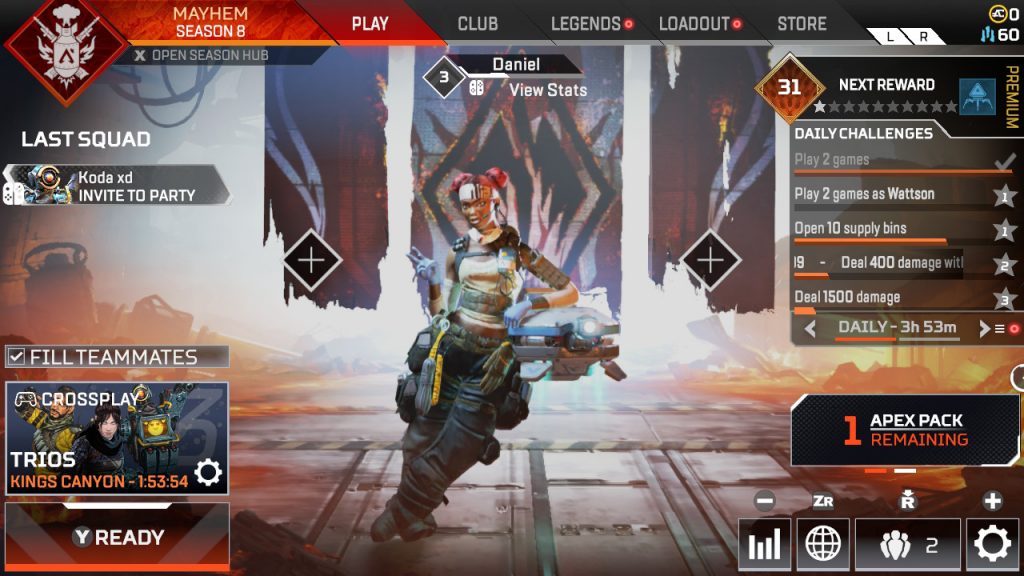 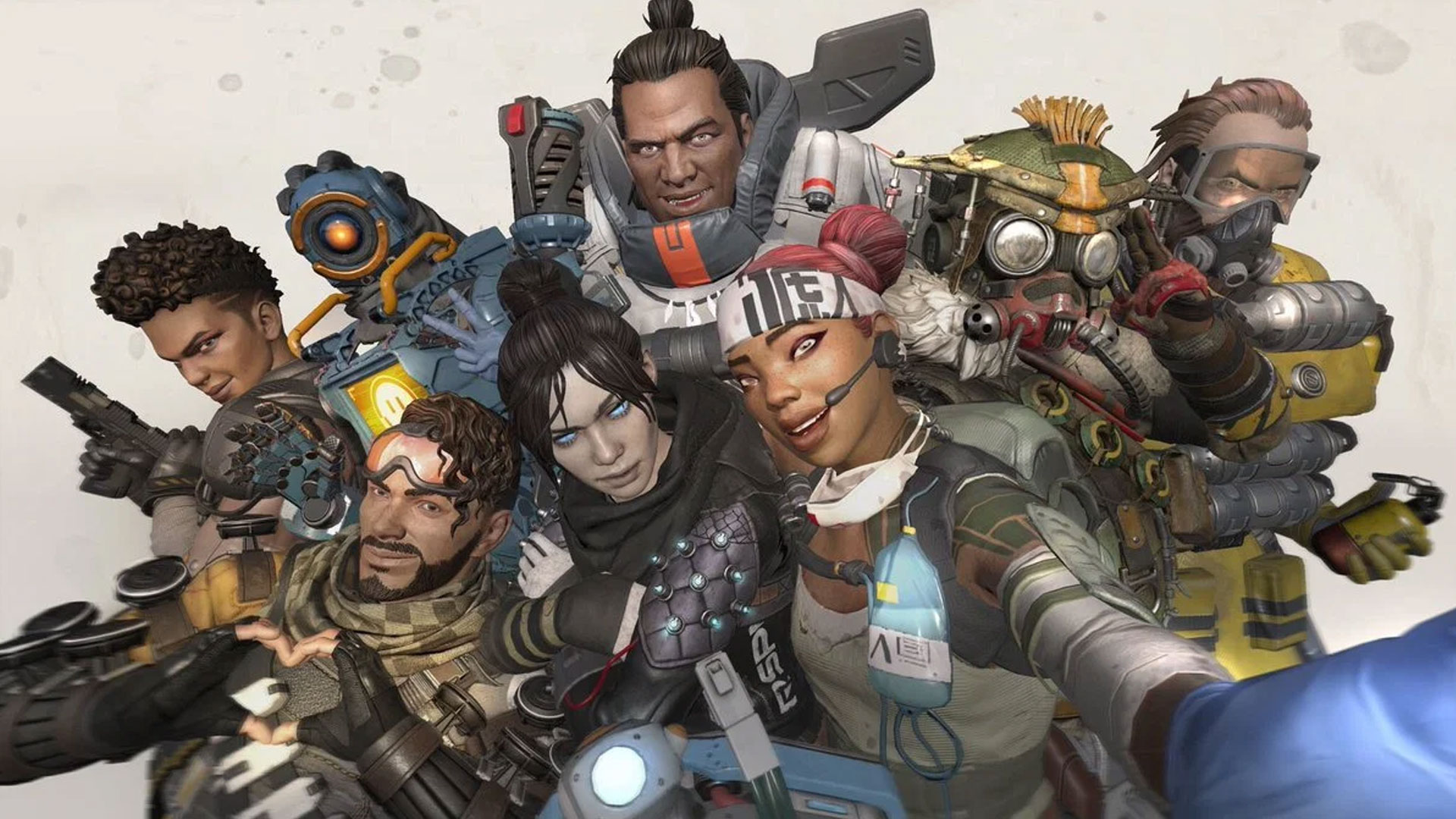 Apex Legends is best played anywhere other than on Switch.

I’ll end my review by sharing my biggest disappointment with this port: There is no cross-progression. If you play on a different platform, your save/progress won’t carry over whatsoever. That means starting everything over again. On an inferior version.

I won’t pretend to understand the developmental complexities of getting a cross-progression system working, but I do know that other games have pulled it off flawlessly. Fortnite, Rocket League, Spellbreak, Rogue Company, Paladins… They’re all competitive games that have managed to let users carry over their progress and cosmetics to whatever console they want. In 2021, any game with a heavy focus on collecting skins needs to have cross-progression. Without it, I have no need for the Switch version. I’d love to have a companion version of Apex I can take with me anywhere, but why would I want to play a low-res, wonky version of the game that doesn’t even carry over my progress?

I’ll be blunt: the Switch version of Apex Legends isn’t good. It’s mediocre at best, and with no system for cross-progression, it’s an absolutely useless port for an Apex Legends PC player like myself. It runs like hot garbage with blurry textures, noticeable pop-ins, stuttering, lag, and frame rate dips. Underneath all that is a barely serviceable version of the game, which is — at its core — an outstanding battle royale experience with cool characters and great combat. It’s just a shame Switch players will have to suffer through its many shortcomings to get to that.

I’m sorry, Switch owners. This is not the definitive version — not anywhere close. If you have the option, buy Apex Legends anywhere else — at least until port developer Panic Button can sort out the Switch version’s many issues. I promise you, this is an excellent game — it’s just hard to see under layers of stuttering and petroleum jelly. 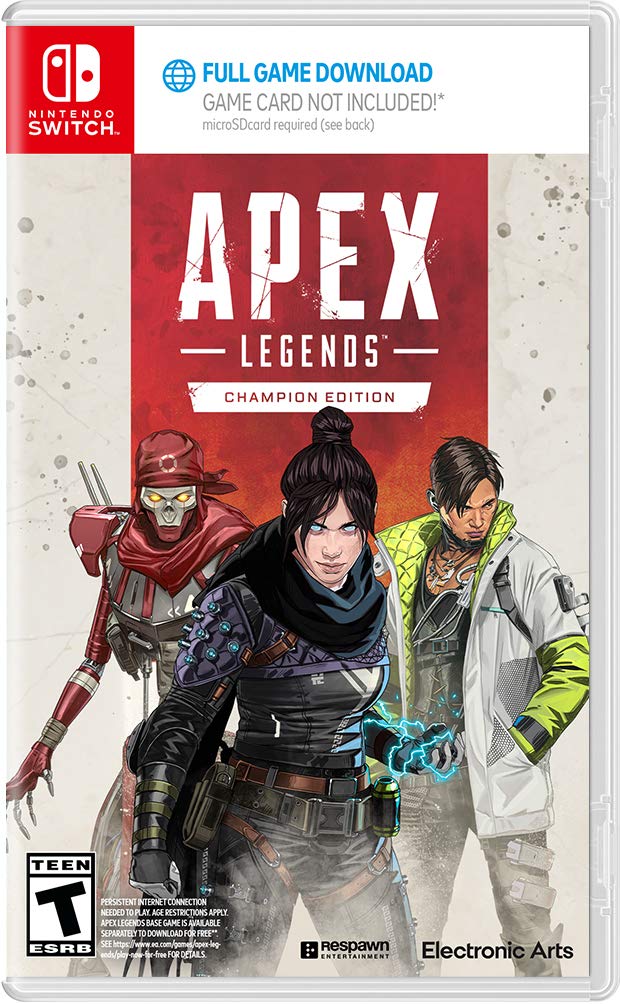