Three Mother 3 interviews with Iwata and Itoi resurface from 1997

Just days after the anniversary of Satoru Iwata’s passing, some previously unavailable Mother 3 interviews have been scanned, translated, and shared. These efforts come from Kody Nokolo and can be found in full on Mother Forever, who are no strangers to Mother 3’s earliest years.

The three interviews are dated to February, March, and July 1997 and come from Dengeki Nintendo 64 magazine. As that timeframe and title would indicate, these all stem from the days when Mother 3 was still “EarthBound 64” before its eventual redesign and migration to the Game Boy Advance.

The first of these is with Shigesato Itoi, the series’ creative driving force. Topics discussed focused mostly on the game’s sound and music, stating that “ear” would be important to the experience. He also pointed out the game’s protagonist, and discussed the game/series’ migration to the 64DD that would never truly be completed. Another noteworthy bit of info is his desire to reflect anxiety in battle, citing the scrolling HP counters as an example of this.

The March ’97 interview, this time with Iwata, is mostly focused on discussing provided screenshots and detailing what’s happening in them. These details also found their way to Nintendo Power’s own feature on EarthBound 64, though Iwata also made mention of one other detail – that Porky Minch may be involved. As players of both Mother 3 and Super Smash Bros. Brawl will know, that plot point survived all the way to the finished project. 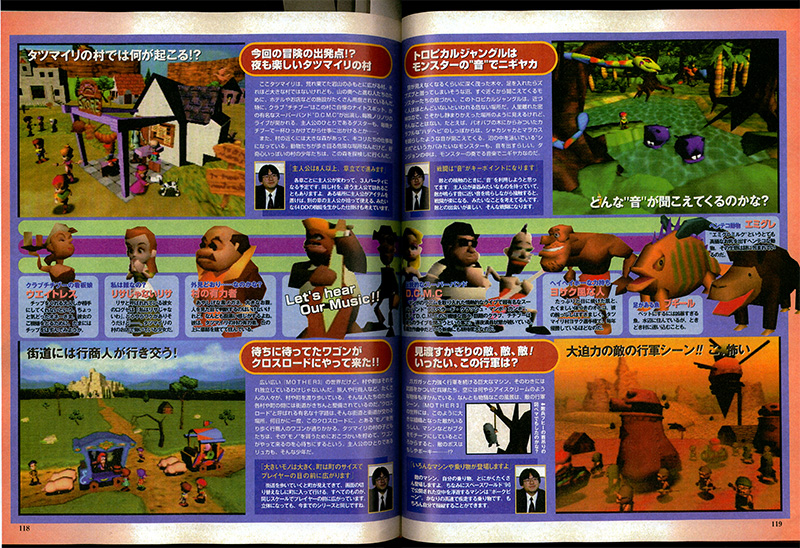 The third of these interviews, also with Iwata, focuses mostly on what makes Mother 3 different from its two predecessors. This includes mentioning the game’s chimeras, frequent enemies, and a major reflection of one of Mother 3’s main themes. The 64DD is also discussed again from a hardware specs perspective, with the increased rendering power making certain game worlds possible. A few other titles are shouted out, like Kirby Air Ride as a multiplayer title that would benefit from the system, and Itoi’s other ill-fated N64 project, Cabbage.

Thank you again to Mother Forever and Kody Nokolo for their efforts in translating and preserving these interviews!