The recent ROM dump of Dinosaur Planet online — the Nintendo 64 game developed by Rare which would later be reworked into Star Fox Adventures on the GameCube — has inspired nostalgia not only within longtime Nintendo fans, but seemingly the staff that worked on the project, too. Kev Bayliss, an artist who designed characters in Diddy Kong Racing, Battletoads, and Killer Instinct, recently published an article on VGC which shares some new insight into the game’s history.

Fans may already be aware that, before Fox McCloud became the face of the final product, the protagonist in the previous Dinosaur Planet build was going to be a wolf called Sabre. According to Bayliss, however, “Fox wasn’t actually the second protagonist we tried for Dinosaur Planet, but the third.”

“The main character was originally going to be – believe it or not – Timber, the cute tiger from Diddy Kong Racing,” he explains. “That’s because he was intended to be the star of the previous year’s racing game, when it was originally known as R.C. Pro-Am 64. However, due to a last-minute rebrand which saw Diddy take pole position as the main character, Timber had to accept second place and never really made the leading role.” 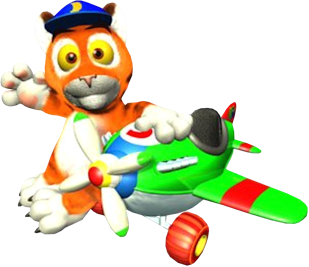 Fans had previously presumed this to be the case thanks to datamined files, but now we have confirmation.

Bayliss goes on to explain Timber’s leading role. “In Dinosaur Planet, Timber was going to be a ‘time-travelling tiger’ with a rucksack, little fingerless gloves, a baseball cap and a small dinosaur for a sidekick.”

Bayliss was pleasantly surprised along with many other Nintendo fans last week when the Dinosaur Planet build made its way online. “I never thought I’d ever see the original demo again. For me it’s another of those nostalgic trips back into game development that makes me smile because like so many other demos I worked on, they were created so long ago that I’d forgotten they even existed.”

Finally, he has a challenge for all video game preservation enthusiasts out there. “Now, if only somebody could dig up that really old demo with Timber in his rucksack… Come on, give the guy his own game after 25 years!”