Why Kingdom Hearts: Melody of Memory is the only KH game you need to play

This may come off as hyperbolic at best or heretical at worst, but as the title suggests, I believe Kingdom Hearts: Melody of Memory may be the most important KH game to date, and the only entry in the series newcomers actually need to play. At the very least, it’s undoubtedly the most friendly to newcomers outside of the original Kingdom Hearts for a number of reasons, which I will now go into great detail over, because I just can’t shut up about this game.

Kingdom Hearts is an imposing series to get into narratively speaking, and that’s putting it lightly. It’s my favorite entertainment franchise of any media, yet I still have to visit the KH Wiki and Google certain things from time to time. Darkness, Nobodies, Kingdom Hearts as a concept, Ansem, not-Ansem Xehanort… it’s a ton to take in and process, especially for the uninitiated. Melody of Memory seeks to not just assist newcomers in coming to grips with this 12-game epic’s tale, but completely obliterate the barrier to entry altogether. It neatly recaps every single major event in the series, covering in roughly 10-15 hours what would normally take a player hundreds of hours to see while playing the series traditionally.

Newbies will miss out on the nuance and impact of a lot of the smaller moments that have been omitted for time, but it still stands as the most Simple and Clean way to interact with and digest the story to date; short of reading written plot synopses of each title. I’m actually getting to witness that new-player experience second hand, as my younger sister, who has always liked Kingdom Hearts but only recently started playing through the series in earnest, has decided to restart with this entry. Melody of Memory has been giving her all the plot-critical story beats, and she’s been following along while thoroughly enjoying the tale of Kingdom Hearts as told by Kairi. 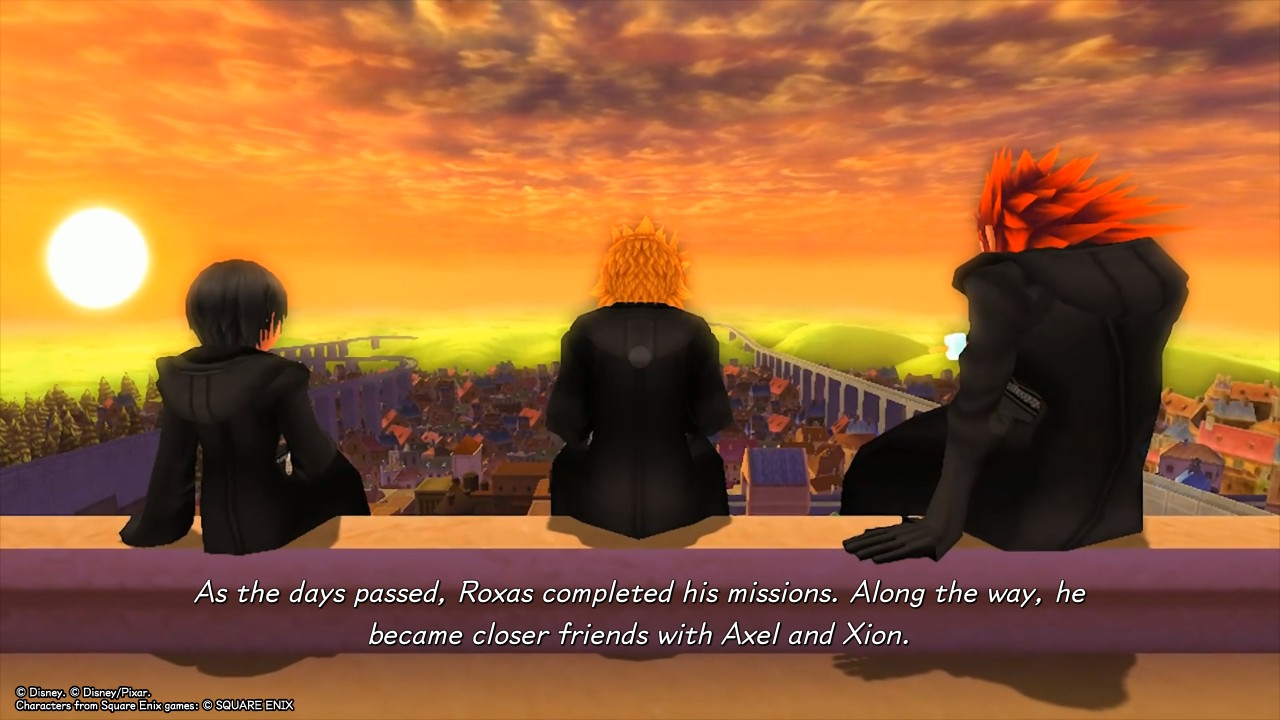 Previously, I would recommend that newcomers to the series play every title if they had the time, but to only play Dream Drop Distance and Kingdom Hearts 3, as well as watch the Kingdom Hearts X: Back Cover movie if they simply wanted to be current on the story. This was due to the movie being the earliest point in the timeline, along with both games having fairly detailed story recaps while being the latest points in the timeline. This story-only recommendation has now changed to only playing Melody of Memory and watching Back Cover to get caught up on the lore and prepare for whatever future entries may hold.

It’s not just the narrative clarity that makes it so easy to recommend to first-timers, however, as the game’s pick-up-and-play nature and availability on Nintendo Switch makes it the easiest entry to play through at whatever pace you need to. Furthermore, and this is a bit of an aside, but it’s technically endlessly replayable. In most Kingdom Hearts games, there’s a limit to what you can do – find all the treasures, complete all the tournaments, beat the secret bosses, etc. As noted in our review, those carrots to chase are all still here, yet rhythm games by their nature are built to be played over and over whenever you’re in the mood for your favorite track or just some rhythm-based gaming goodness. 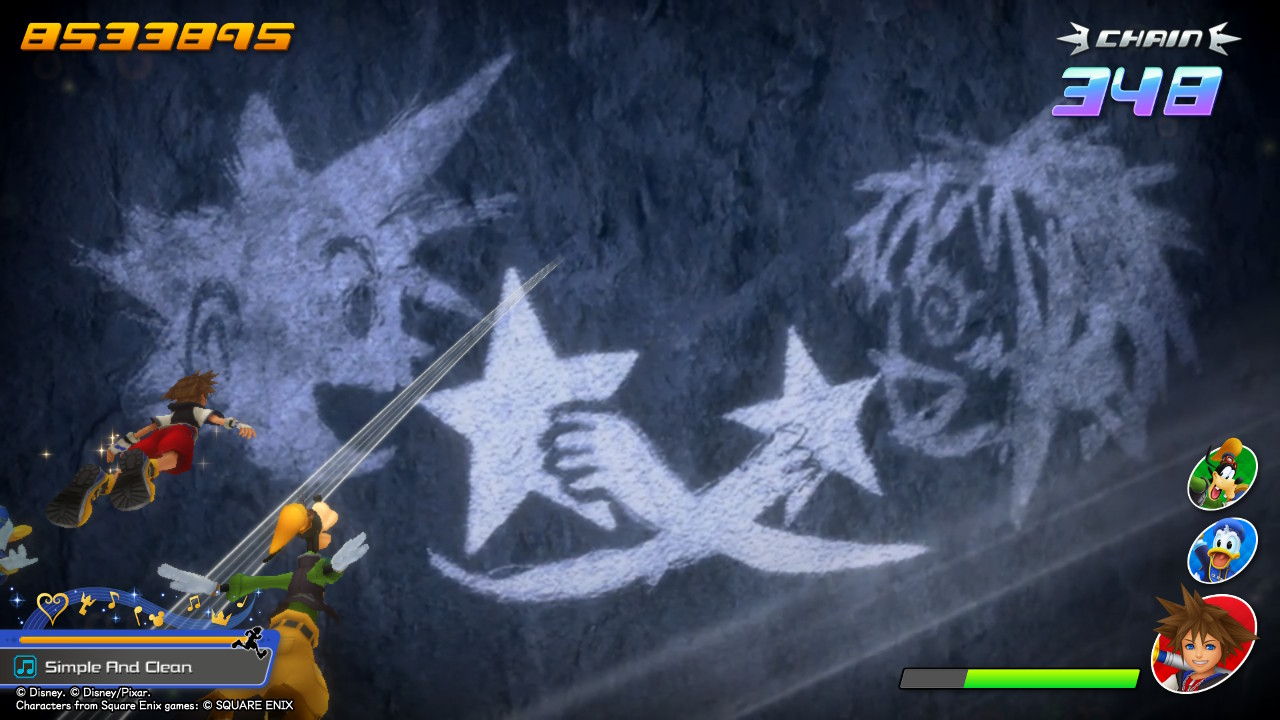 That’s not to say that it doesn’t feel like a Kingdom Hearts game though! One of the most satisfying aspects of Kingdom Hearts is its combat, which for many fans is the series’ primary draw. Melody of Memory has captured that inherently satisfying feeling of bashing legions of Heartless with a Keyblade and unleashing Ars Arcanums on Nobodies in such a way that it feels more like an action-RPG than a rhythm game at times. I’m not exaggerating when I say that it has quickly become my go-to game whenever I need a quick fix of Kingdom Hearts’ satisfying, key-slinging combat. No, it’s not KH2’s near-perfect battle system, nor is it KH3’s immensely varied stable of combat options, but it still feels like Kingdom Hearts, and that’s a big deal for a non-traditional entry such as this.

My Friends are my Power

One of the modes I’ve missed most from previous Kingdom Hearts games are the co-op modes from Birth By Sleep and 358/2 Days. They were a great way to experience the games with friends, as well as introduce the series to newcomers without the baggage of the story. Thankfully, co-op has finally returned to the series, and it’s an absolute joy. Ever since the demo was released on the eShop a few weeks ago, it has become a Saturday tradition in my house to pick a song on co-op and play until both players get a simultaneous Full Chain run. This makes it ridiculously easy to trojan horse your non-KH-loving friends into trying the series: Get them in the door with the promise of co-op fun, and let the irresistible music and game-feel do the rest 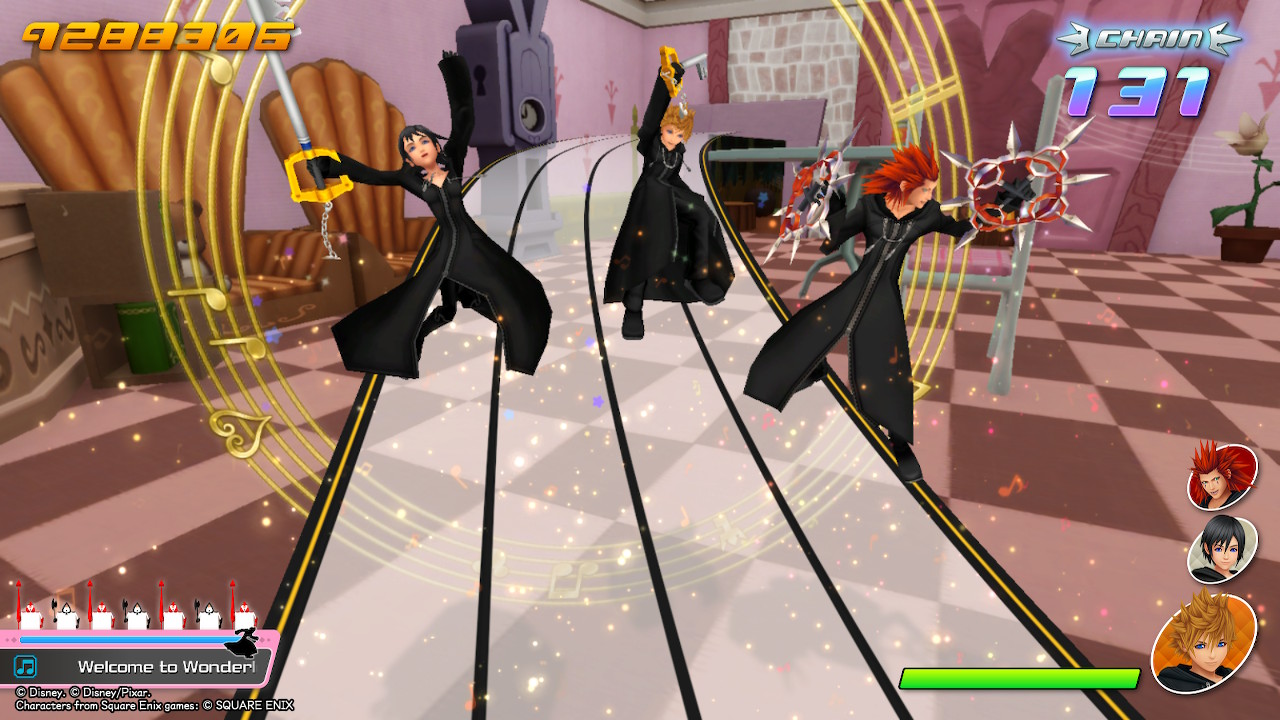 Be warned though, I’ve already contracted the Tetris-effect from my time playing, and actually see music notes and feel Keyblade swings while listening to music away from the game! It’s not exclusive to Kingdom Hearts music, either, as I find it happening with just about any song I’m familiar with. I’ve been especially experiencing it with all the Christmas music that’s playing everywhere this time of year.

The Door has Opened

In the end, Melody of Memory is an impeccably crafted love letter to the series, its grand story, and its unquestionably excellent soundtrack. That combined with its accessibility, replayability, pick-up-and-play format, and super fun co-op is why I personally see it as one of, if not the most important entry in the series from a narrative standpoint. It’s also the exact reason why I can’t recommend it enough for newcomers to the franchise. By consolidating the incredibly complex story of Kingdom Hearts into one title, Melody of Memory has removed the largest hurdle in the way of getting into the series while maintaining the franchise’s signature game-feel, and that feat simply cannot be overstated. 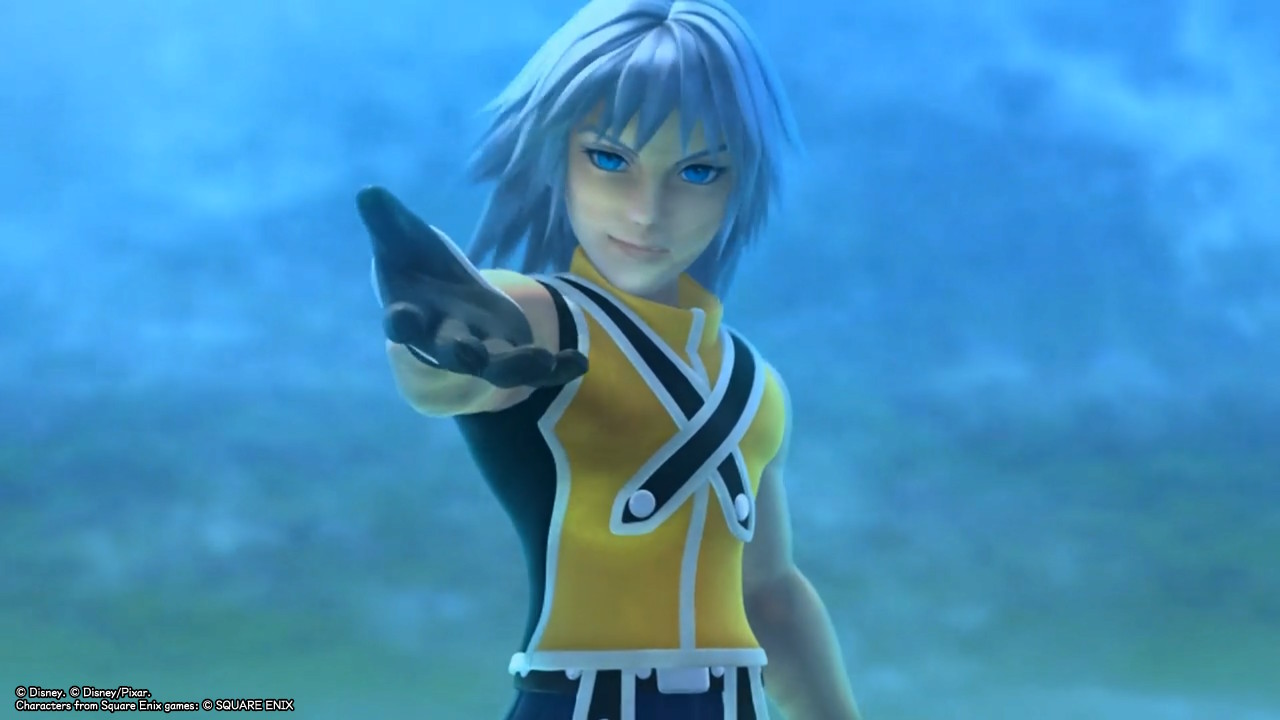 Until next time, may your Heart be your Guiding Key!