Music has such a crucial place in video games, working its way into your experience with every note. The Kingdom Hearts series knows this, with series composer Yoko Shimomura’s work bringing a familiar sensation to anyone who’s ever swung a Keyblade. Through their dedication to recurring themes like Simple and Clean or Dearly Beloved, and worldwide orchestra tours, Kingdom Hearts’ music has become just as iconic as its characters and ideas over its almost two decade existence.

Frankly I’m surprised that it took this long for a full rhythm game to come along, but thanks to the work of Theatrhythm Final Fantasy maestros indieszero we now have Kingdom Hearts: Melody of Memory. Though the makeup here is fantastic and the experience from start to finish is an enjoyable one, a few points hold it back from being a flawless performance. If you’re a fan of the series and the songs that carry it though, you won’t want to miss it.

The core of Melody of Memory is its World Tour mode, which you must playthrough to unlock songs and experience its story. Once started you’ll be treated to a series wide Gummi Ship map, putting nearly every world Sora, Donald, and Goofy (and the rest of his friends, who are his power) have ever visited before you. As someone who’s played these games since the beginning, that alone was an awesome sight.

After a brief tutorial (appropriately set in a stained glass void), you can begin going from world to world, starting with Destiny Islands. Each features two songs, usually the world’s map theme and battle theme. The vast majority of these are of the “Field Battle” type. These see your party running along a music staff, with enemies and obstacles along the path. Each of these prompts a button press timed to the music, with how well you match the song’s timing being graded and scored. 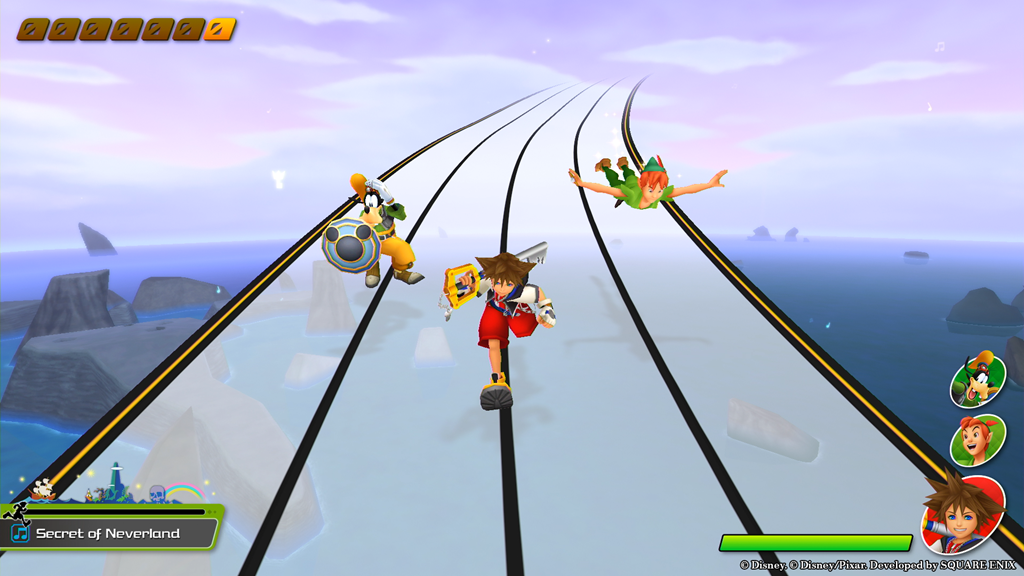 Others include Memory Dives, which feature cutscenes as their backdrops as Sora (or whomever you’re playing as) glides along. These introduce a few different input types, like pushing the control stick in certain directions or holding buttons down. This style is mostly used for individual character themes or the Utada Hikaru songs, but most curiously all Disney world songs from Kingdom Hearts III are presented similarly (presumably due to their more modern assets being incompatible with the PS2-era graphics used throughout the rest of the game).

The third, final, and least utilized are Boss Battles. These play like more intense Memory Dives, though instead of cutscenes their backdrops are your party fighting against key villains from the series. In my playthrough I only encountered four, which is a shame. All these Boss Battle songs are also available as a Field Battle version, so it’s unfortunate the reverse couldn’t be true for the likes of Marluxia or the Lingering Will. 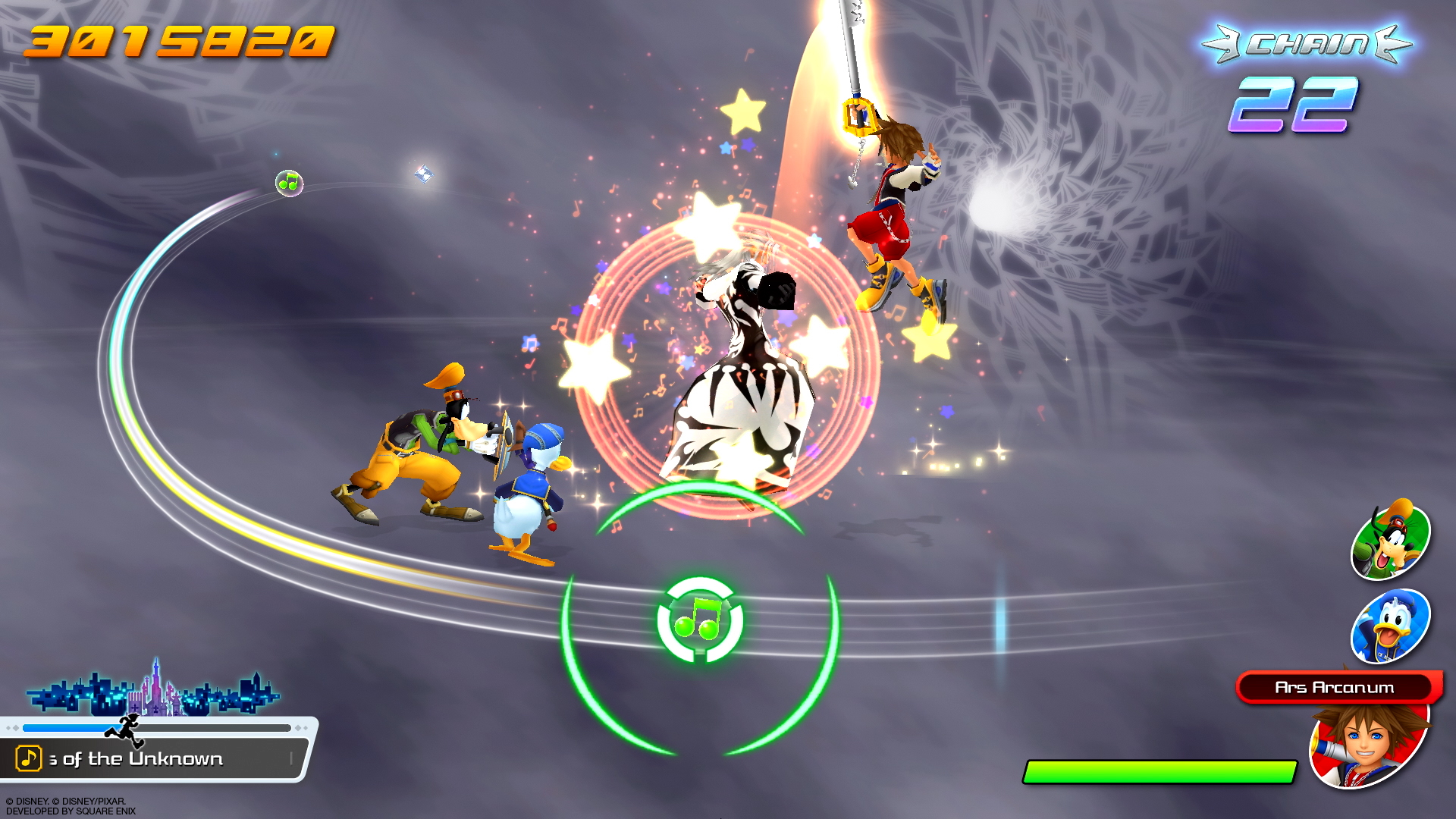 The overall play style has been done plenty in previous rhythm games, but with Melody of Memory the elements taken from the Kingdom Hearts series shape the experience. Animations are familiar, the timing icons are the “lock on” marker, and the backgrounds sequester you through familiar Disney worlds. The perspective (following behind and slightly above the party) and curvature of the path also play a role, though sometimes a turn or dip could make an enemy/note tough to see. Needless to say, mastery relies just as much on memorization as it does simply following visual cues.

The Mark of Mastery

The 140+ songs of the game come in three difficulties – Beginner, Standard, and Proud. The majority of my playthrough was spent in Standard, which offered an experience that was enjoyable and not overly demanding. That said, World Tour does a solid job at preparing and encouraging you to work up to Proud mode. As this represents the “fullest” chart of notes it’s also the most accurate to the song, and the most rewarding to play through. 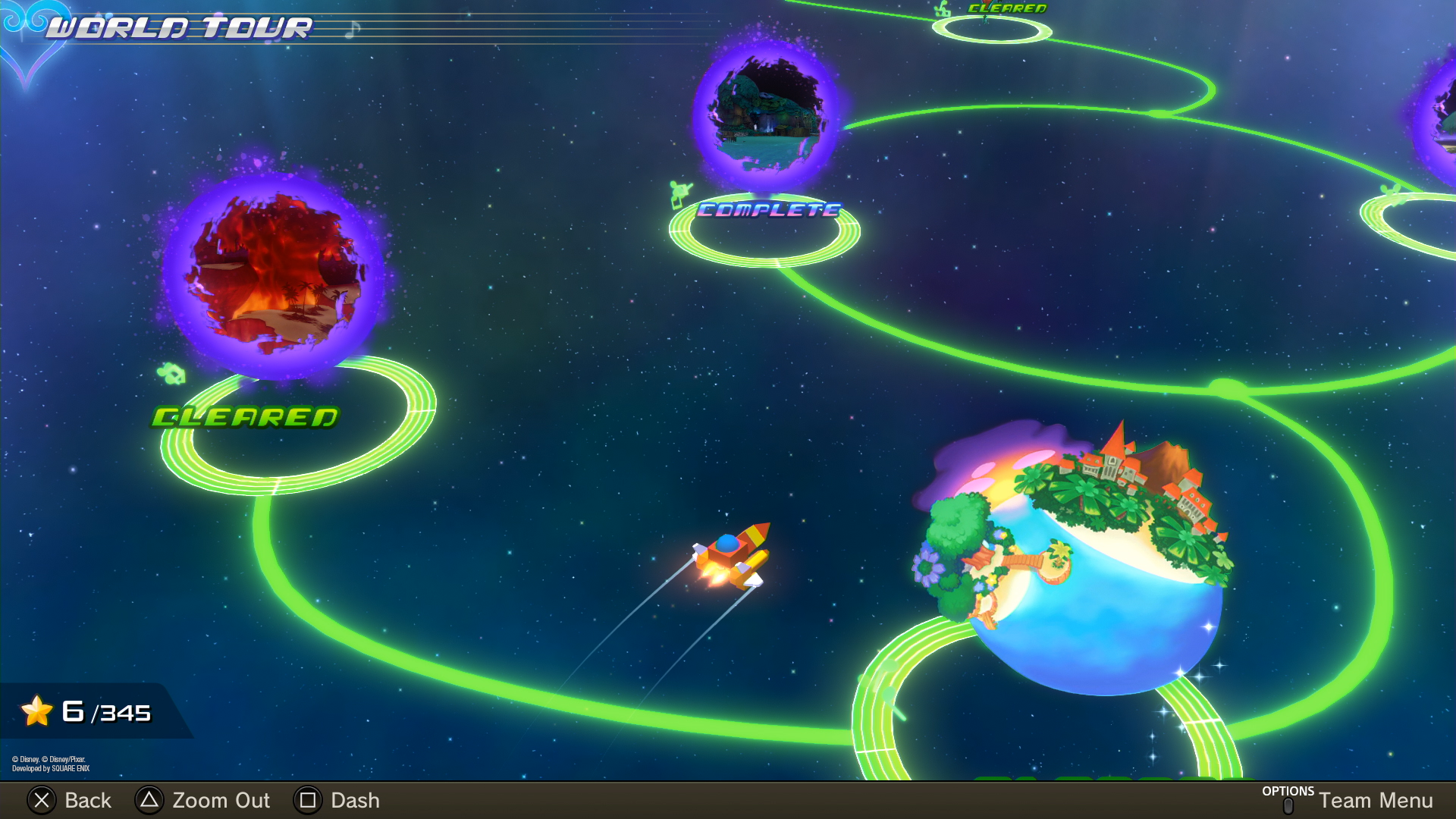 It guides you to that difficulty via each song’s missions. While these are optional objectives (like finishing above a certain HP percentage or not missing any of a specific note types), progress is gated by how many you’ve completed. Every mission accomplished earns you a star, and these stars unlock gates between sets of worlds. By the later portions of World Tour at least one of these missions often required playing at Proud difficulty.

This works in the game’s favor in another way. Each song has an assigned difficulty, but due to just how varied each represented Kingdom Hearts world is (and some flexibility with what order you can unlock them) there isn’t a straight progression as you head through World Tour. I appreciated being able to play around the map a bit when a song would catch me off guard. You wouldn’t expect a track based on Mickey Mouse’s earliest cartoons to be so tricky and ranked the same as Final Fantasy VII’s One Winged Angel, but here we are.

On the subject of song variety, Melody of Memory delivers well in this regard for the most part. Though nearly everything here comes from Yoko Shimomura, she’s always done well at capturing the feel of a given world in her music and it suits a rhythm game soundtrack well. Certain songs were never exactly memorable so their place in the game may seem odd (“Hey, you wanna jam to…the Land of Dragons’ battle theme?”) but having such a wide breadth of music and worlds lead to me (re)discovering favorites. Lilo & Stitch’s Deep Space, I’m talking to you. 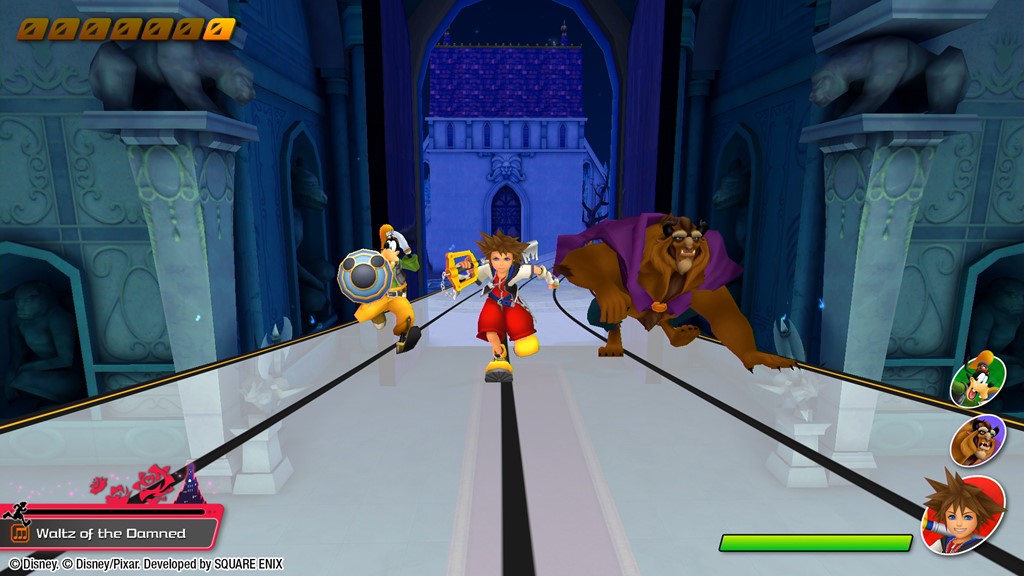 Unfortunately there are some rather glaring omissions here, possibly due to rights issues. Specifically, no music from Pirates of the Carribean appears in the game which is a notable let down – with respect to He’s a Pirate. Series mainstay 100 Acre Wood is also absent, meaning no Winnie the Pooh. As has been the case since Chain of Memories, no Tarzan content makes an appearance either, but the lack of  Fantasia world Symphony of Sorcery’s classical compositions is another odd let down, especially given their status of being in the public domain.

One notable and welcome surprise is the fact a few Disney songs that haven’t been featured in Kingdom Hearts, like The Lion King’s “Circle of Life” or Aladdin’s “A Whole New World,” are included. There are so few of these, though, that it feels almost teasing when you consider just how iconic these can be and how large a role Disney plays in the games. As has increasingly been the case in the series, it seems the House of Mouse’s creations play second fiddle to Square Enix’s original cast of characters. 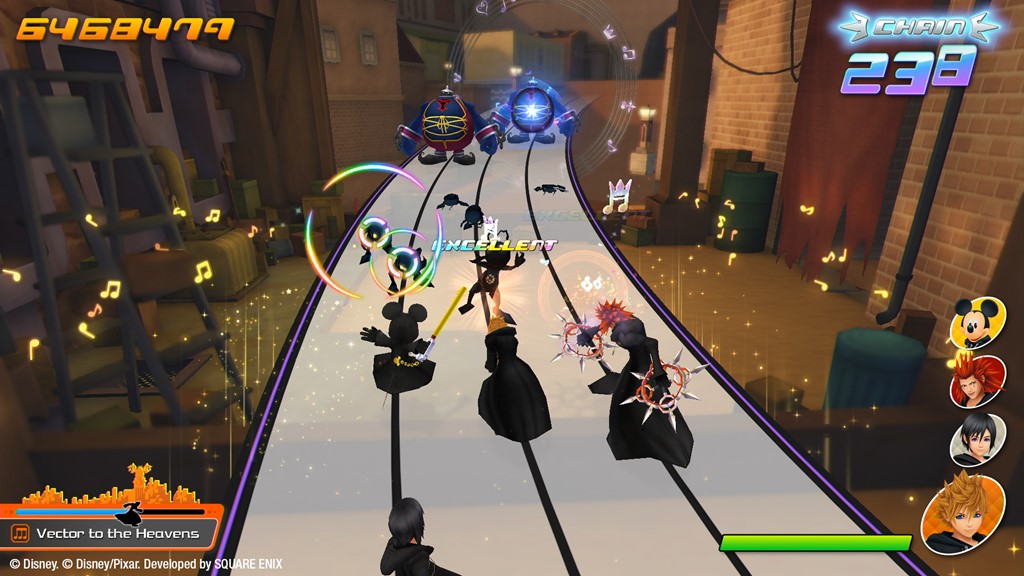 That’s not exactly a bad thing, though. Arguably the best songs (both for listening and for playing) are Kingdom Hearts’ own. Be they dramatic boss themes like Vector to the Heavens or more somber and emotional movements like The Other Promise, these high marks bring you back to turning points and iconic story scenes to score the main motif of this side game – memory.

The Story So Far

If you’re mostly entering Melody of Memory for the next piece of Kingdom Hearts lore, I have good news and bad news. The good news is that yes, it’s here, and focuses on Kairi as promised. Playing through World Tour, you’ll occasionally be treated to story summations from her that explain the overall plot of the series. No spoilers but there are some revelations pertaining to her and the mode concludes with new cutscenes that sets up the future of the series. 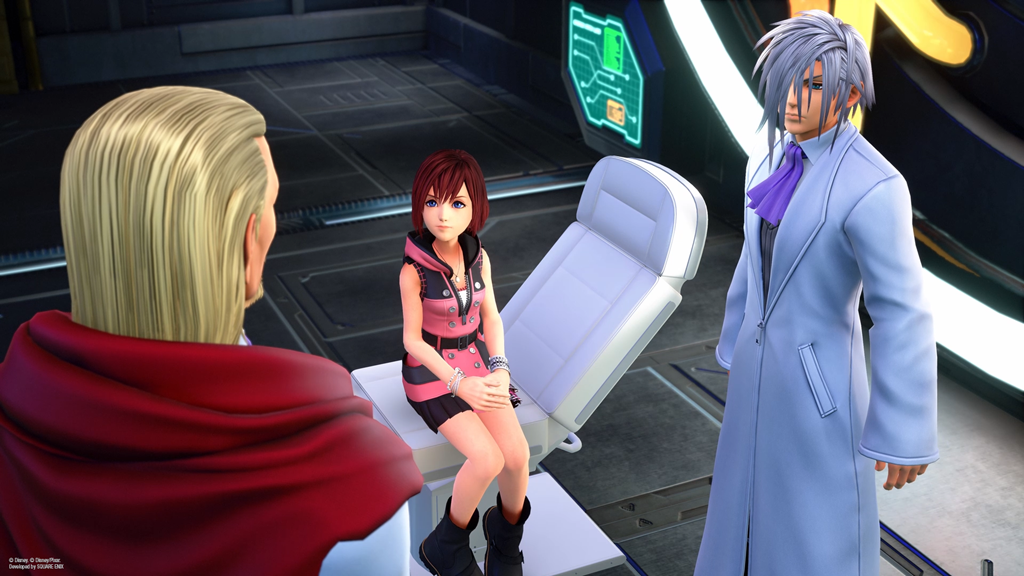 The bad news is just that. Everything “new” here is at the very tail end of the experience in a few long cutscenes interspersed with a few, final gameplay segments. No “Ansem Report” to add further details. As such this is best looked at as a Kingdom Hearts flashback with a tease at the very end.

For some that may be enough, and the gameplay alone kept me moving forward until I played through every song I could even if I didn’t have to. One other unfortunate aspect, and maybe it’s unfair to compare this to Theatrhythm, is that the intent seems to revisit Kingdom Hearts’ famously spread out plot and not exactly celebrate. The Final Fantasy rhythm games (and even the unlocalized Theatrhythm Dragon Quest) had a full sense of joyfulness to them that made it feel like a big reunion. Melody of Memory, by comparison, is more of a refresher course on the story so far.

That doesn’t mean you can’t stay busy and entertained once the World Tour is complete. Melody of Memory is full of different collectibles, some earned for completing songs or their corresponding missions and others synthesized with a helpful Moogle. These include pieces of artwork (as collectible cards), the cutscenes you view throughout the story and Memory Dives, and even the songs themselves. If you ever wanted to make your Switch a Kingdom Hearts music player, this game’s got you covered. 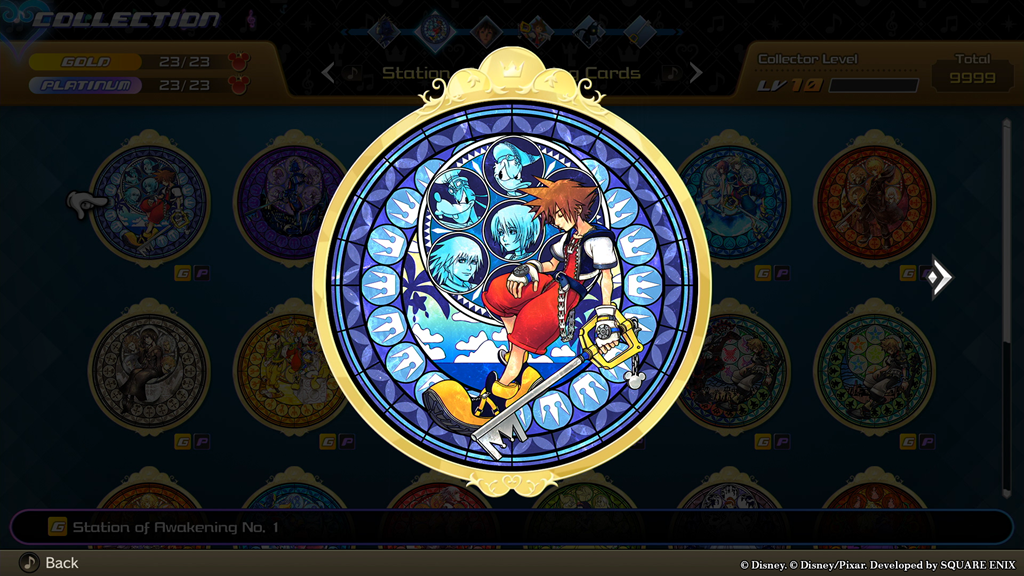 There’s even a head to head competitive mode in the form of VS Battles. While I wasn’t able to adequately test the Online and Local modes, COM Battles against AI opponents are enjoyable if I’m not in the mood for a particular song and just want to play for a bit. These have their own progression system and is a good place for unlocking collectibles as you rise up the ranks. There’s also a Co-Op mode, though this also went unfortunately untouched during our review period.

May Your Heart Be Your Guiding Key

It took about ten hours for me to play through the entirety of World Tour (every song at least once), but that’s hardly where Melody of Memory ends. Scrolling through the Track Selection now I see certain songs singled out as “Today’s Tune,” and my Museum is nowhere near full. Everything I do ups my overall rhythm total, with unlockables and party stats increasing all the while. Other than the focal point of the series’ music, that’s the main draw of this rhythm game and an aspect I’m happy to see made it over from Theatrhythm – incentive after incentive to keep playing.

You might think it hard to recommend this one for anyone not so familiar with Kingdom Hearts, but with its focus on remembering the whole of the series it does make for a decent entry point. As for rhythm game fans, it stands as one of the more prominent entries in the genre for the system and it won’t let you down for the sheer volume of content and song variety.

Kingdom Hearts: Melody of Memory may not be the entry in the series Switch fans want most, but that makes it no less of an enjoyable encore to the Dark Seeker Saga. With undeniable excellence in its setlist, the mentioned flaws are ultimately minor. If there’s ever a Curtain Call (or Final Mix) for this one that rectifies its omissions and lack of play style variety, it would be the makings of a must have. For now though, this one stands as an enjoyable dive into the heart of the series that keeps things simple and clean.