I’ll admit it… Immortals: Fenyx Rising was not a game I was looking forward to. Ever since it was announced as Gods and Monsters back at E3 2019, I pretty much wrote the title off as another generic hack-and-slash. Following the conference, the game was pretty much completely off my radar. Over a year went by before I would get another look at the title during Ubisoft’s September press event, but once I got that deeper look, the game finally finally piqued my interest. The world looked colorful and full of life, and the gameplay actually looked pretty darn fun. Maybe there was more to this game than I originally thought…

Little did I know how much of an understatement that would turn out to be.

I might as well come right out and state the obvious about Fenyx Rising: It takes a lot of inspiration from The Legend of Zelda: Breath of the Wild. And I mean a LOT of inspiration. Let’s go down the list of shared elements, shall we?

Like it or not, the Breath of the Wild comparisons just cannot be avoided. But let me be crystal clear: these similarities are NOT a bad thing, in my humble opinion. In fact, there were portions of the game during which I somehow found myself enjoying Fenyx Rising even more than the title it was inspired by. 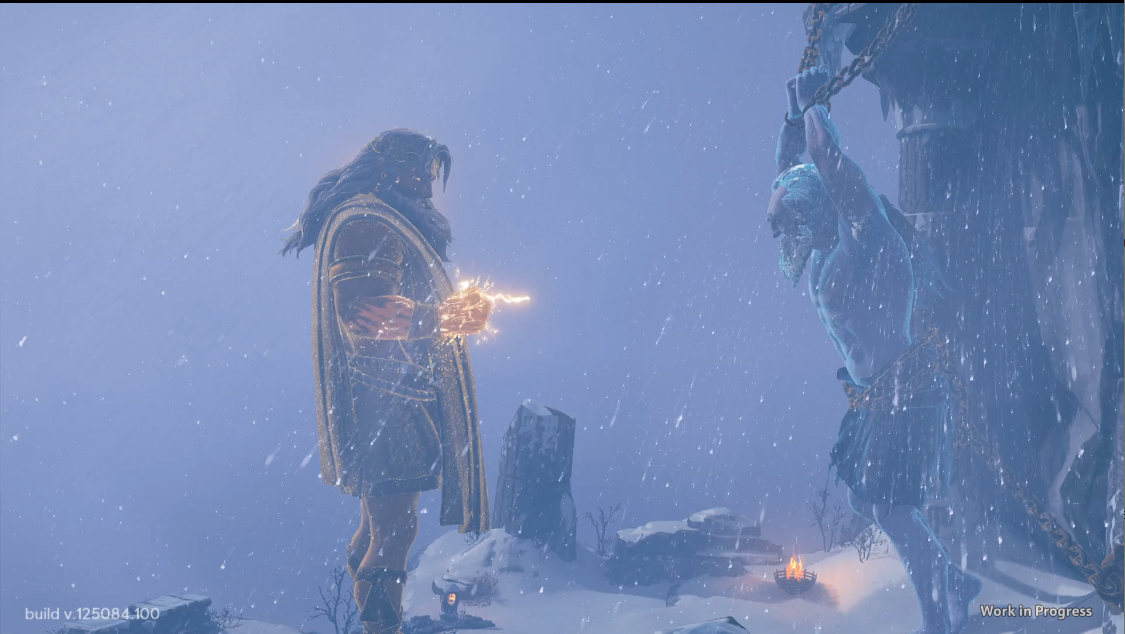 Before we get into the gameplay, I should probably mention that throughout the game, the Greek gods Zeus and Prometheus narrate your adventure with a load of tongue-in-cheek dialogue. It’s pretty hammy for the most part, but I found myself laughing out loud at some of the commentary. Some might not be too fond of the constant back-and-forth of the narrators, but I found their presence to be more enjoyable than not. To get an idea of what this sounds like, check out the gameplay video above.

Fenyx Rising has a lot to do and a lot to see. When I found out that I would be given four hours to do pretty much anything I wanted to do in the game for this preview, I expected to get bored pretty quickly. Once again, Ubisoft surprisingly exceeded my expectations. My time with the game went by much faster than I expected, and at no point in Immortals did I find myself bored or struggle to find something worthwhile to do. That’s because — on top of the story missions I was following throughout my playthrough — I found myself getting side-tracked by time trials, puzzles, and quests which are scattered throughout the world. I faced off against a legendary boar in battle, I did a speed-run from the bottom of a mountain to its summit to get an optional treasure, and I beat up a lot of baddies that were roaming the land. There were dozens of little missions for me to find during my playthrough, and I am sure many more to be discovered if I had more time. From what I can tell so far, freedom and exploration is abundant in Fenyx Rising, so get ready to explore every nook and cranny if you want to do everything this game has to offer.

As I said earlier, movement in Fenyx Rising will feel immediately familiar to anyone who has played Breath of the Wild. The game starts the player on foot with no weapon and a very tiny stamina gauge. This gauge is used for running, swimming, and of course, climbing. Immortals lets players scale pretty much any surface they can find in the game as long as the gauge isn’t empty. Players can also eventually equip themselves with a pair of wings that let them glide across the world a bit faster. Players can even find and tame wild horses found across the world that can then be summoned at will to quickly cover ground. Once again, I understand just how similar all of this might sound, but Immortals puts enough of a twist on these features where they feel fresh but — at the same time — comfortably familiar. 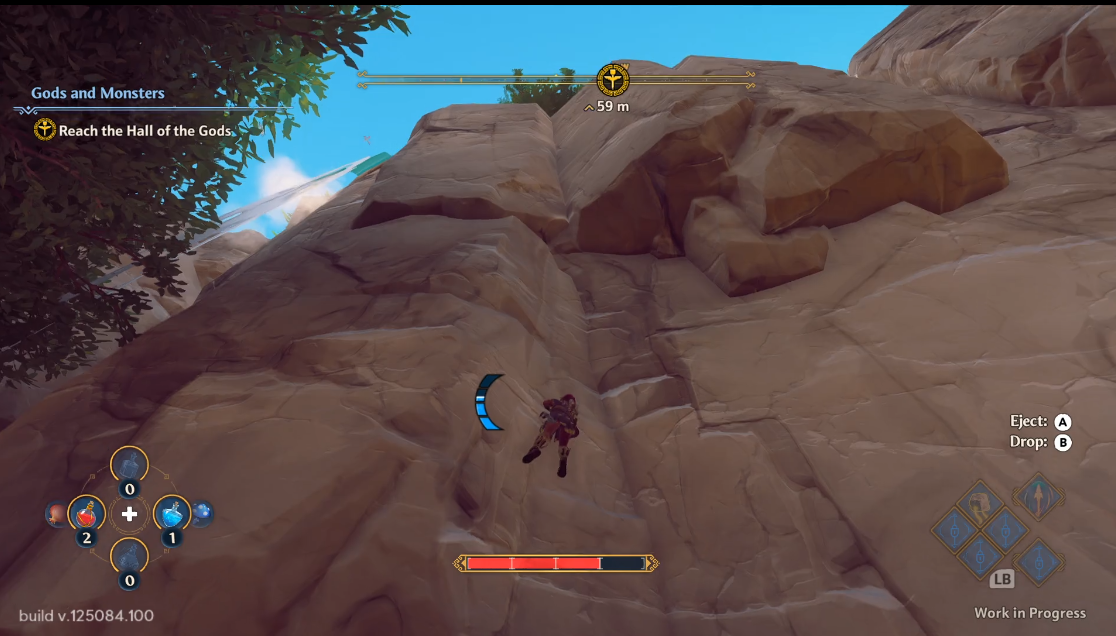 Does this look familiar?

The area that Fenyx Rising diverts the most from Breath of the Wild is in the combat. Fenyx is equipped with two main weapons: a sword and an axe. The sword is meant for quick attacks while the axe is a bit slower, but delivers a more powerful blow to enemies. Switching back and forth between these weapons is as simple as pressing the correct button, and finding the right combination was key to taking down some of the more imposing enemies that I encountered. Fenyx can also dodge attacks and deliver a parry to temporarily stun enemies. I eventually gained access to a bow that allows me to do ranged combat, and it’s even possible steer an arrow through the air with a bullet-time like effect. Keep in mind, the demo I played did not give me access to all of the game’s arsenal, so expect even more weapons in the final build. 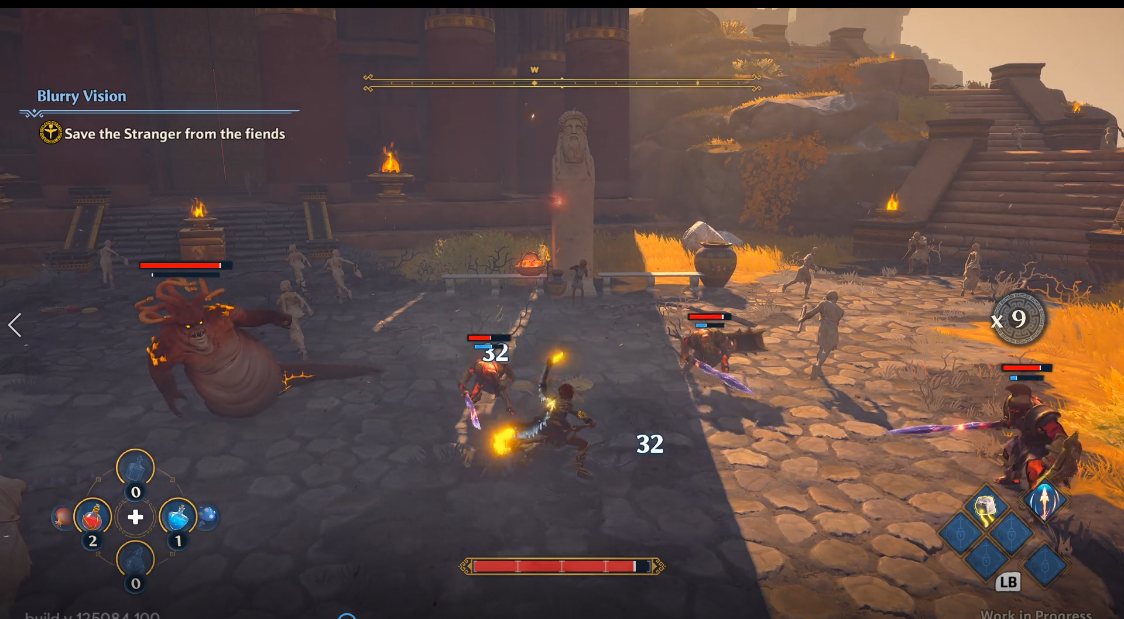 Long story short, Immortals: Fenyx Rising immediately feels like an old friend. Yes, its shockingly similar to 2017’s Game of the Year, but is that really such a bad thing? While the mechanics feel familiar, the story, humor, and world feel brand new. While I expect some to immediately discount it as just a clone, I for one am beyond excited to get my hands on the finished product. Assuming we don’t see a delay, you can snag Immortals: Fenyx Rising on December 3rd.