Nintendo Treehouse Live’s October 2020 return featured a sizeable segment on Hyrule Warriors: Age of Calamity, giving us an even closer look at the imminent release than the TGS deep-dive in late September.

Things kick off with a look at Urbosa’s gameplay, which revolves around charging up electricity and unleashing it on foes. Pretty soon after finding a hidden Korok, the warrior leaves Gerudo Town and heads out to the northern desert, where we get a closer look at Zelda’s combat style, which features some decidedly creative takes on the familiar runes.

Not only that but the pause menu glimpse we got of this Gerudo Desert mission says the objective is defeating Master Kohga, suggesting the goofy boss of the Yiga Clan will make his return. 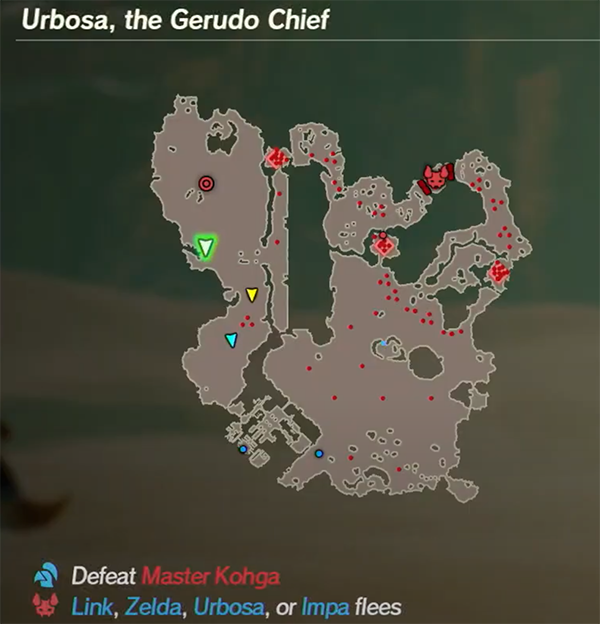 What was perhaps most exciting, however, was that we got a look at the game’s map. Instead of the basic story timeline and adventure map options seen in the original Hyrule Warriors, Age of Calamity will have you pick points of interest from a world map lifted directly from Breath of the Wild. These nodes can be anything from missions to side quests, the latter of which appear to mainly consist of flavor text. Rather than simply converting loot into badges as was the case in the first Hyrule Warriors, you’ll instead trade fish to get a food recipe, or create a training dummy to unlock a new combo for Link.

As for the missions, the one shown in the stream took place in the pre-Calamity Lon Lon Ranch where Link trains with an army of soldiers and Daruk using two-handed weapons. Link is given unique combos when using these different weapons, so there’ll likely be quite a variety of playstyles for the character.

We also get a look at the equipment menu, where it was not only confirmed that weapons won’t break but you’ll also be able to fuse them to create more powerful individual weapons On top of that, you can change head, body, and leg armors. Unlike Breath of the Wild it doesn’t appear that the clothing will change your stats and it’ll likely be cosmetic.

Link can wear (or remove!) familiar clothing from The Legend of #Zelda: Breath of the Wild!#HyruleWarriors #NintendoTreehouseLive pic.twitter.com/CXG0OKyMEf

Finally, the end of the stream showcases more of Impa and a battle against a Hinox.

If you’re eagerly looking forward to Age of Calamity then it’s definitely worth checking the video out in preparation for launch on November 20th, 2020.