After receiving funding from 377 backers, the newest functional Game Boy cartridge from Greenboy Games will officially hit the retro format during Q4 of this year. Where is My Body?, the 8-bit click adventure from Dana Puch starring a mysterious hand searching for its missing body parts, surpassed its Kickstarter goal by over 500% yesterday as it racked in an impressive total funding of $29,348.

Greenboy Games was founded by Dana Puch with the intention of keeping the spirit of the Game Boy alive. Puch has brought several of her 8-bit titles to the system in the past, including Micro Doctor, Submarine 9, and Lunar Journey through functional cartridges and custom boxes reminiscent of classic Game Boy packaging. As Where is My Body? joins the list of available cartridge titles from the developer, have a look at the game’s new official box art and screenshots of the title. 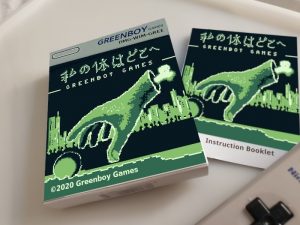 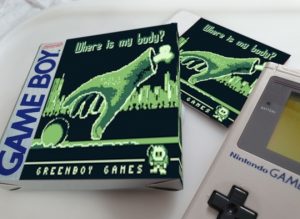 Where Is My Body? will be available in both Western and Japanese cartridges. Each region-specific version will come with a specialized box and manual. The game will be compatible with all Game Boy, Game Boy Color, and Game Boy Advance systems. You can pre-order Where is My Body? In its nostalgic Game Boy cartridge form now on the game’s official IndieGoGo page.