The latest Super Mario 64 leaks include a beta enemy, an ‘Ultra 64’ logo, and a cut up Yoshi

UPDATE: A beta Whomp has also been discovered and it’s face is quite different! Check it out in the video below:

We’re still reeling from the recent discovery of a playable Luigi in a leaked early build of Super Mario 64, but it hasn’t stopped there. Fans are still picking apart the many files that spread online following Nintendo’s latest data breach, including a never-before-seen enemy model.

BETAH ENEMY DISCOVERED
(Implemented by AWiseguyEh on discord, please credit him not me) pic.twitter.com/CyfssgqmFP

Going by the dashing and grabbing animations, this chubby fellow is thought to be a beta version of the Chuckya enemies, the purple, Bob-omb-like spheres that would pick up and hurl Mario great distances.

A logo has also been found that reads “Ultra.” This is likely explained by the fact that an early codename for the Nintendo 64 was the “Ultra 64,” and the leaked files refer to Super Mario 64 as “Ultra 64 Mario Brothers.” This logo could possibly be a remnant from an early title screen.

In Super Mario 64's leaked files, they refer to the game as "Ultra 64 Mario Brothers". Apparently, this wasn't just a codename. Here is a model file for part of the early title screen! pic.twitter.com/nfS8mklcgO

To round out these latest findings, here’s some nightmare fuel for you. A model of Yoshi was uncovered with the various body parts of the model disassembled. This was likely just used for animation testing, but it’s difficult not to see it as though someone cruelly shattered poor Yoshi into pieces. The blank, pupil-less eyes aren’t helping matters, either. 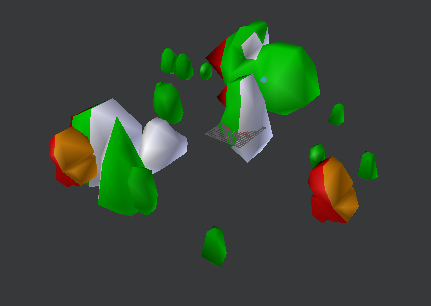 Mario isn’t the only one getting lots of attention from the ongoing prototype leaks, as Zelda fans have also recently found tons of unused and early assets from other popular Nintendo 64 titles Ocarina of Time and Majora’s Mask.