The summer heat is settling in, and Fire Emblem Heroes is getting in the spirit of the season. The debut of new swimsuit wearing heroes was shared just a bit early yesterday, but now we’ve gotten an even better look at them and upcoming features thanks to a surprise Feh Channel broadcast.

Our ever earnest owl guide opened up by showing this year’s summer summonables, those being Selena, Joshua, Lute, and the pair up of Mia and “Marth”. Earlier we reported those two as a Duo Hero, albeit an odd one for them being from different games. What they are though is a Harmonized Hero, whose defining characteristic is exactly that. More will certainly be on the way, and it was specified these two go together because of happenings within Fire Emblem Heroes itself.

To mark both Harmonized Heroes and summertime, some special events will be live in game soon. These include log in bonuses, reward maps, and a free (albeit random) five star hero from the entirety of the game’s summer themed special heroes. That doesn’t include this year’s batch, but if you had your fingers crossed for a certain character you best keep them crossed so their color comes up for this one-time freebie. 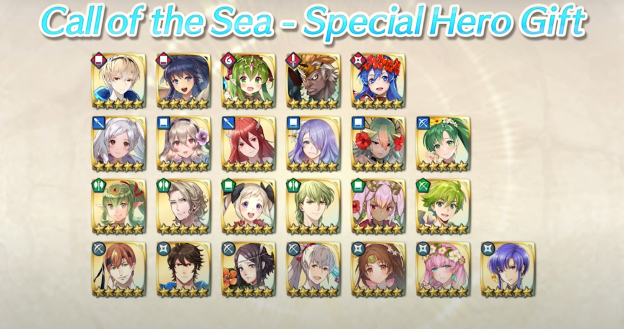 The rest of the Feh Channel was dedicated to a new mode and an addition to an existing one. Resonant Battles will task you with chasing down thieves on extra large maps before they get to its top row, similar to how thieves in Fire Emblem games would sometimes try and beat you to treasure and then slip away off the map. By defeating them (and working around the other units helping to defend them) you’ll earn rewards for upgrading your heroes. Bonus points will also be provided for using characters from designated Fire Emblem games, with the inaugural season being for Heroes itself and Fire Emblem: Radiant Dawn.

Finally Aether Raids is getting a new feature called Auto-Dispatch. This will allow you to deploy your team to complete maps on their own three times a season. It sounds like it’s meant for helping bump you into tiers you’re just shy of or giving you a little boost when you don’t feel like thinking your moves out. If you’re serious about the mode it shouldn’t replace more thought out fighting, but as someone who doesn’t exactly care about Raids I can appreciate its addition.

That was it for this Feh Channel, but most of it is coming up sooner than you might think. The new summer heroes, Call of the Sea bonus event, and Resonant Battles will all come to Fire Emblem Heroes on June 18th. Auto-Dispatch for Aether Raids is slated for some time in July instead.