Today’s Super Smash Bros. Ultimate presentation was all about history and passion. Director Masahiro Sakurai’s enthusiasm for and knowledge of SNK was on display as he detailed everything coming to Smash along with Terry Bogard, the King of Fighters stage, and the insane number of SNK tracks coming in the DLC pack. From his own memories to fun facts about the characters and series, it was more clear than ever that this is a labor of love for the creator. There’s no better proof of that than Terry himself.

Didn’t have a chance to watch this morning’s live stream? No worries: We break down everything for you right here. 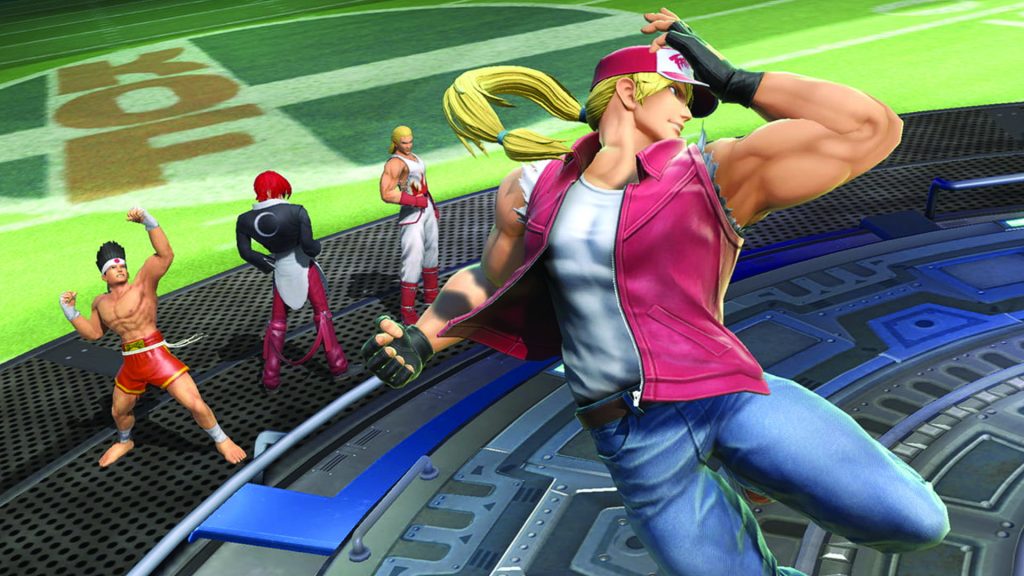 Even as fighter number 74, Terry is bringing new mechanics and features to the game inspired by his appearances in both his native Fatal Fury series and The King of Fighters quattuodecalogy. His simple yet iconic appearance stands out among the roster, and his animations and voiced lines carry a lot of personality. Similar to fellow fighting game veterans Ryu and Ken, Terry will always face opponents in one-on-one bouts in order to accommodate another shared mechanic with the Street Fighters – special move inputs.

Terry’s list of specials allow him to input their home series commands on the control stick in order to increase their power and speed. Reflecting the multiple attack buttons of his games, you can also bring out a weak or strong variant. It’s still possible to perform them with the more simplified Smash inputs as well, giving Terry access to different variations based on how long the attack button is pressed for both styles of input.

His neutral special, Power Wave, sends a wave of energy through the earth and along the ground. It’s good for long range pressure and for covering his approach. Using it in the air instead will let out a shorter range burst, inspired by how the move behaved in The King of Fighters ‘96. It may not be a projectile when used this way, but it has increased knockback to put space between you and an opponent.

Terry’s side special is unique in that he has different attacks for pressing forward and backward. The forward version is Burning Knuckle, a charging punch with solid knockback at higher percentages. It also has weak and strong variants, and if you use a quarter circle input (down, down-forward, forward) you’ll get a buffed up version with added visuals, sounds, and potency.

When inputting the command backwards (down, down-back, back), you’ll instead get Terry’s Crack Shoot attack. This is an arcing flip kick that has a hitbox more above Terry, giving him options for hitting opponents above and multiple approaches. It also has multiple variants  based on button presses, and both side specials can help Terry’s horizontal recovery – just make sure you input the right one.

His up special is the Rising Tackle. Its variants add more height to the move, giving the weak some utility in combos while the hard version has more height to aid vertical recovery. It can even be used after other specials, letting Terry do a Burning Knuckle or Crack Shoot before a Rising Tackle for a fuller (though very linear) recovery. If you hold down on the control stick briefly before performing the move, Terry’ll glow and you’ll have invulnerability frames, making that recovery a little safer and giving him a reversal option on wake up.

As for Terry’s down special, that’s the perfectly-named Power Dunk. It also gains some invulnerability frames when performed with its command input, this time the classic Shoryuken motion (forward, down, down-forward). It’s a leaping attack followed up by another punch, looking flashy and hitting hard. In that way it might be the Terry-est move of his specials, but where his attacks really shine are with another unique aspect of his kit.

True to his roots, Terry is able to cancel his normal attacks into a special. This allows him to lay in with faster, safer attacks before inputting a special command and following up immediately with the desired move. While this is second nature for most fighting games, it’s not as common in Smash and it gives him plenty of options for racking up damage and hit-confirming his riskier specials. He can even cancel some aerials, a feature not found in his SNK roots. Knowing combo routes and which special to cancel into will likely be a key part of playing Terry well going forward.

For a Final Smash, Terry leads with a souped up take of the Power Wave called the Triple Geyser, followed by a Power Dunk and then his signature super (“Here’s the big one!”) Buster Wolf. While I expected him to have two Final Smashes ala the Street Fighters, he instead had his techniques rolled into one Final Smash instead. That’s not a bad thing though, as he also got another unique mechanic that’s even more satisfying true to form: Super Special Moves.

When Terry’s damage reaches 100 percent or more (or he’s down to one-third of his max health in Stamina mode) a “Go” icon will appear over his portrait. When it’s there he has access to two other, powerful attacks. Performing down, down-back, back, down-back, forward and the attack button will get you the Power Geyser, a pillar of energy launched up right in front of Terry. Another way to think of the input is to do a quarter circle back, then a half circle forward. Sakurai also included a more simplified input – down, back, down, forward.

His other Super Special Move is the earlier mentioned (“Are you okay?”) Buster Wolf. Here it’s a charging punch forward similar to Burning Knuckle, but much more impactful and damaging. It (and Power Geyser) can still be blocked though, and have recovery frames. You won’t want to be throwing them out non-stop, as tempting that may be. Buster Wolf’s input is two quarter circles forward (down, down-forward, forward, then repeat) and the attack button. Its simplified take is simply down, forward, down, forward. These can be canceled into as well, making a damaged Terry even more dangerous to deal with.

Terry’s normals are just as inspired by his home series, looking familiar and having some other, specific call backs (like his dash attack being the Power Charge). He’s also able to attack immediately out of a spot dodge with an uppercut, giving him another unique option when on defense. All in all, Terry is packed with not just references (and reverence) for his portrayals across SNK’s library but familiar mechanics and methodology from 2D fighting games. It makes for a character that’s rewarding and familiar to play as if you’re more accustomed to those, and a dynamic addition to the roster for Smash faithfuls.

Terry’s home stage included in Challenger Pack #4 is called King of Fighters Stadium and it’s remarkable for two reasons: its huge cast of SNK characters that cameo in the background and a unique mechanic that separates it from other Super Smash Bros. Ultimate stages. 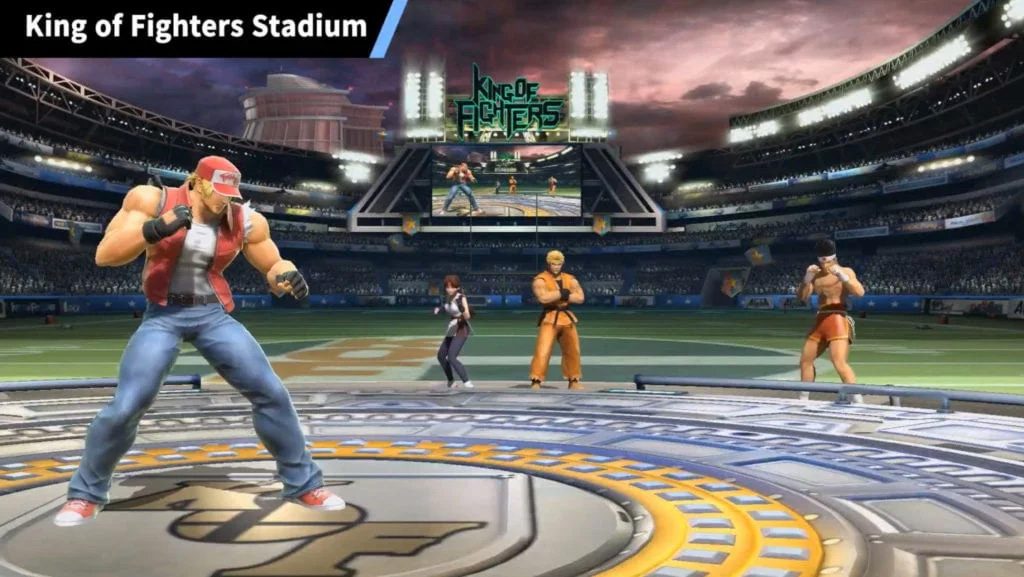 The King of Fighters Stadium stage is a simple flat ring, slightly elevated above ground level. Compared to other stages in Super Smash Bros. Ultimate, it most closely resembles Pokémon Stadium and Boxing Ring. A jumbotron that displays on-screen action can be seen in the background. This stage is unique in that invisible walls are on both sides of it, blocking the blast line. However, these barriers can be broken by knocking a player into it with enough force.

20 different characters from across the SNK universe make cameos on the King of Fighters Stadium stage:

Mai Shiranui, despite being very prominent and popular in the Fatal Fury and The King of Fighters series, does not make a cameo. Humorously, Sakurai stated in the Terry information live stream that this is because “Super Smash Bros. Ultimate is for good boys and girls of many different ages.” This was a reference to Mai’s revealing outfit, which may not have gone over well with video game ratings boards.

Challenger Pack #4 includes 50 tracks worth of music from across the SNK library of games. Check out the full list of music, including brand-new arrangements and original versions:

Challenger Pack #4 is available to download starting today; those who already own the Super Smash Bros. Ultimate Fighters Pass can play as Terry or on the King of Fighters Stadium stage immediately.

Players who don’t own either can buy Challenger Pack #4 individually for $5.99 USD or the Fighters Pass for $24.99 USD on the Nintendo Switch eShop.

The Fighters Pass includes DLC fighters Joker, Hero, Banjo and Kazooie, and Terry, along with an unannounced fifth fighter and associated stages for each.

Players will need to download the version 6.0.0 update for Super Smash Bros. Ultimate before they can download Challenger Pack #4.