Review: A Hat in Time for Nintendo Switch

Collectathons were some of my most favorite titles growing up, with Banjo-Kazooie standing out in particular. The genre may have fallen off, though Mario’s 3D affairs and games like Psychonauts kept the dream alive in the meantime. Come 2017, though, and we had not one, but two throwbacks to the genre via Kickstarter: Yooka-Laylee and A Hat in Time. After some ambiguity, the latter of these is making its way to Switch, bringing its overflow of millinery and cuteness to a Nintendo platform for the first time.

The cutest collection around

A Hat in Time puts you in the wide-brimmed headgear of a little girl known only as Hat Kid, who makes her home on a spaceship and keeps a rather extensive collection of magical hourglasses on board. These Time Pieces end up jettisoned and scattered across a nearby planet, forcing you down to its strange sections on a scavenger hunt that lives up to its inspirations. While the premise itself is of minor importance, the world of A Hat in Time shines with its charm and variety – both strengthened by its The Legend of Zelda: The Wind Waker-esque visuals – that doesn’t let up across its multiple chapters and areas. 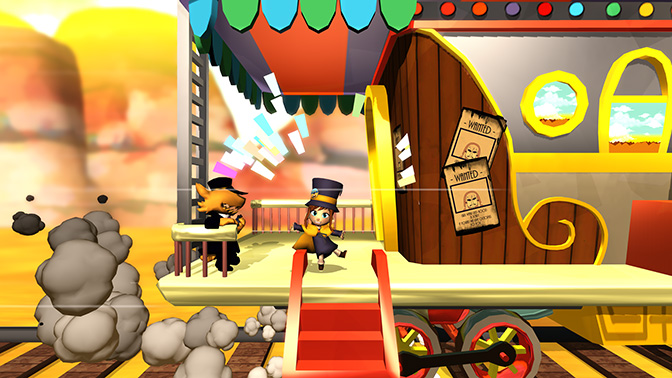 The game’s first world, Mafia Town, is an entire island run by big burly cooks who brag about punching seagulls. Nearly all of them are identical, and it creates this surreal and absurdist vibe from the get-go that the game runs with. After some progress, you’ll be caught in the conflict of two rival, bird, film directors, have your soul stolen by a contract loving shadow wraith, and deal with an equally-plucky-but-much-more-mustachioed little girl. It’s the kind of experience where every NPC has something quirky to say, and so long as you’re on board with its brand of whimsy, you’ll smile the whole way through.

As for the gameplay itself, platforming feels responsive and smooth. Hat Kid’s mobility is evocative of Mario’s own – jumps, dives, wall kicks and such – with a few added elements to make for its own, unique style. These come in the form of hats and badges, which give you unique actions to get around (an early hat allows you to toss explosives) or more passive abilities (like attracting nearby collectibles to you). Collecting these, on top of gathering up the all important Time Pieces, gives a fair amount to do in each of the game’s worlds without over becoming overwhelming or tedious. Exploring is inherently enjoyable, so much so that it was easy to get a little sidetracked from main objectives just to have a greater look around its cel-shaded world.

The Switch version is also launching alongside the Seal the Deal DLC, which adds a complete chapter to the game’s core offerings alongside some devilishly difficult challenges. For anyone that wants more of what the game is selling, they’re a solid compliment and have their own sets of rewards and unlockables to gather up. The Switch version will also, eventually, be receiving the punderfully-named Nyakuza Metro DLC chapter, as well, similarly expanding the game. Without the DLC, the game is still a fun, five-chapter adventure that’ll have you revisiting its areas with new objectives and Time Rifts – isolated platforming challenges ala the FLUDD-less sections of Super Mario Sunshine – to take on.

For all the praise I give the game on its own merits, the Switch port is unfortunately not the best way to experience it. There was much flip-flopping on if the game would even make it to the system, even more if you include the canceled Wii U port. It’s a welcome addition to Nintendo’s collection of indie titles and has been playable, but in my time with A Hat in Time I’ve encountered multiple cases of slow down and stuttering, as well as a more expected hit to the textures and edges while playing in handheld mode. 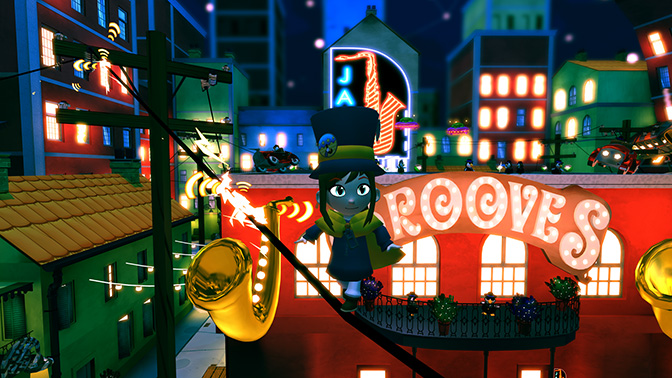 Some of the visual flaws in the port are mitigated by the game’s own artstyle and throwback nature, but it’s still a shame when it looks so good on other platforms. Some areas and specific chapters get it worse with respect to performance, the Time Rifts being particularly bad in this regard. While my system hasn’t outright crashed at all while playing, there’ve been times I felt it was dangerously close both mid-stage and while loading. Playing while docked does a lot for the performance, with visuals improving, as well.

It’s a shame, really, as the core game is a genuine delight. To its credit, I pressed onward through these troubles to see more of its world, its characters, and its tantalizing collectibles. A Hat in Time carries the spirit of its inspiration so well that I was willing to push through those technical hiccups, but I can’t rightfully say this is the best way to play it. If you’ve a PC up to snuff, then that’s where this collectathon shines: with a dedicated mod scene and a fanbase for multiplayer. Always playing while docked is certainly an option, and for A Hat in Time it’s easily the best on a technical level.

Still worth your Time

One thing the Switch version does have going for it, though, is the console debut of co-op multiplayer. Two players are able to pair up locally with a quick toggle on the pause menu, bringing the also-adorable Bow Kid into the mix. While I never encountered any co-op specific challenges or areas, it’s still a special kind of fun running around the game’s worlds with a friend. Consider it a nice extra — and a good excuse to revisit the game if you’ve toured it before but never got to share. I was even able to play co-op while undocked, though the previously-mentioned performance issues were still a factor and in some situations more pronounced when doing so. 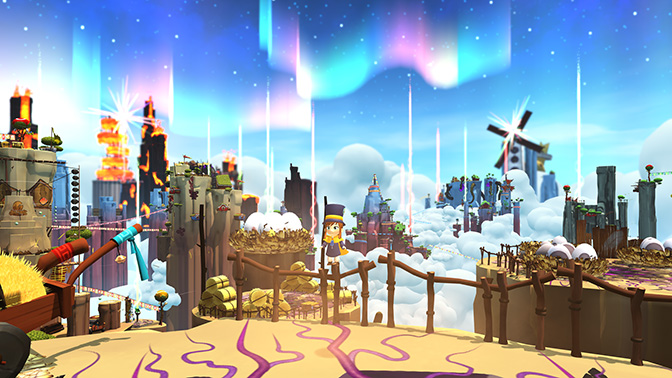 If you just gotta play on-the-go or in your bed, come into A Hat in Time on Switch with some patience and understanding. This is a lovely game with a dedicated button for blowing kisses. Though it may not have much depth in terms of an overall story, it successfully captures the episodic fun of a cartoon series and controls splendidly through its various worlds and platforming challenges. It may not be the best it’s ever been here, but A Hat in Time on Switch is most definitely still cute as heck and worth taking notice of.