Looking back at AlphaDream’s adventures with Mario & Luigi

After over 19 years, Japanese developer AlphaDream has declared bankruptcy.

Comprised of many former Square staffers, the studio got its start on the Game Boy Color with Koto Battle: Tengai no Moribito, a Pokémon-adjacent card battling role-playing game that already showed a willingness to experiment with traditional RPG battle systems, with each monster’s card containing a kanji that, when combined into a real word, results in powerful combos. Needless to say, it never released in the West.

AlphaDream never left handheld development, moving onto the Game Boy Advance with another new, Japan-exclusive IP — Tomato Adventure, although apparently a GBC version was almost complete and ready to ship before Nintendo suggested remaking it to the then-new followup system. In this game many of AlphaDream’s trademarks, like vibrant character sprites and dozens of unique battle mechanics, are present and correct, but those of us in the West never got to experience it due to the game targeting a very young demographic and the battle system not being well received. 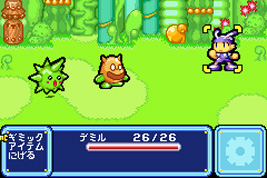 And that brings us to AlphaDream’s western debut… Hamtaro! Yes, a month before the RPG series they’re most well known for made its debut, they put out Hamtaro: Rainbow Rescue in Europe. It’s very adorable. 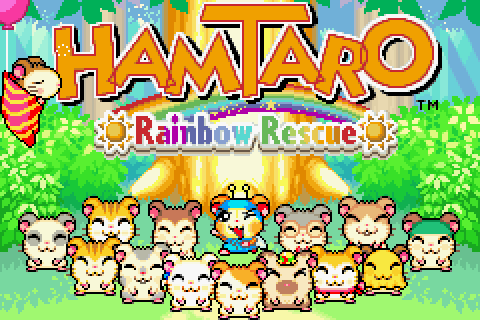 But yes, the studio’s big break worldwide would be Mario & Luigi: Superstar Saga in 2003. At that point, there had only been two major Mario RPGs: the Super Nintendo’s Super Mario RPG, and the Nintendo 64’s Paper Mario. Superstar Saga takes elements from both but gave it a unique twist — you control both brothers at the same time, with the A and B buttons. This fundamentally changes both exploration of the overworld and battles, as puzzles require the brothers to interact with one another. Some places might need Mario to be small, so Luigi squishes him down to size with a hammer. Others need you to spin through the air, so Luigi hops on Mario’s shoulders and they become a physics defying helicopter.

Like the other Mario RPGs before it, Superstar Saga also excelled in its sense of humor and writing. Bowser’s characterization as a lovable oaf saw its continuation, Luigi’s cowardliness was amplified following in the footsteps of the relatively recent Luigi’s Mansion, and we saw one new character take the internet by storm — Fawful. With his memetic speech patterns and instantly quotable dialogue, it’s no surprise his popularity subsists to this day. 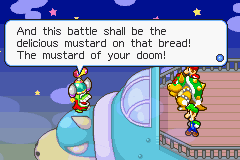 I already mentioned that AlphaDream was made up of former Square staff members, and two key figures in particular were Yoshihiko Maekawa and Chihiro Fujioka — the directors of Super Mario RPG. Both went on to work on different aspects of the new series, with Fujioka working on field design for numerous titles and Maekawa directing the first before moving onto a producer role. The DNA of that classic SquareSoft RPG can be seen in multiple facets of Mario & Luigi, from the duo’s miming antics to Yoko Shimomura’s brilliant soundtracks, and even the Japanese name of the series carrying over the “RPG” part of the title.

Superstar Saga was the only GBA entry in the series, with AlphaDream moving onto the DS with its next entry: Partners in Time. While more controversial than its immediate predecessor and successor, there’s still a lot of inventiveness to love about this entry. The main villains are straight up aliens, and there’s the central time travel plot that doesn’t shy away from already established Mario Lore like Yoshi’s Island. It also gave us a look at Young Toadsworth, which is a treat. 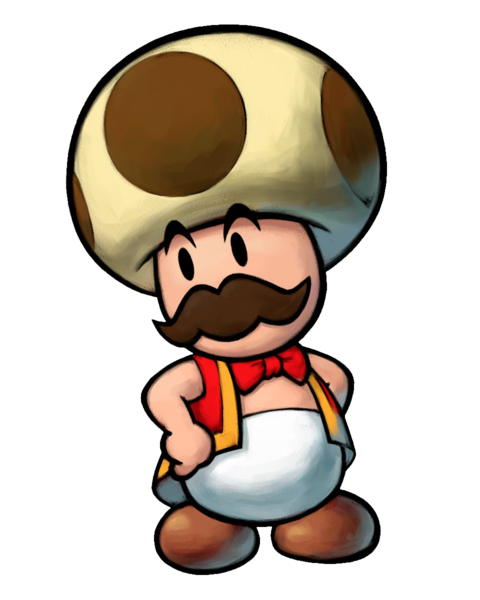 The developer’s willingness to be creative with new hardware also shone through, with the dual screens and extra buttons being taken advantage of by the two new party members Baby Mario and Baby Luigi. These two tykes can set off on their own screen-spanning escapades, while also using the X and Y buttons in battle.

The next game, Bowser’s Inside Story, is seen by many as the zenith of the series, however. Giving big bad Bowser what essentially amounts to the role of the protagonist, it’s a vastly different game, with his playable sections involving a lot more lateral movement, smashing up anything and everything that gets in his way. Once again, the dual screens were the focus here. As Bowser stomps around the overworld on the top screen, you can explore his innards as Mario & Luigi, which leads to some very inventive puzzle solving and battles that frequently switch between the two perspectives. 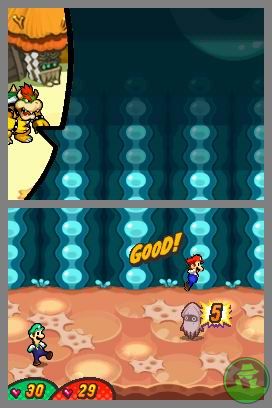 Following their DS successes, it was time to move onto the 3DS. The thick outlines of the earlier sprite work made way for gorgeously animated, higher detailed pixel art and 3D backdrops, and in Dream Team we were back to the simplified duo of the two brothers. That isn’t to say it was back-to-basics, however, as the game not only continued the side-scrolling perspective of Bowser’s guts for Luigi’s dream sequences but there were also the lavishly produced, fully 3D battle scenes, as a Giga Luigi faces off against gargantuan foes.

The final new Mario & Luigi game was something that no one saw coming, but it made perfect sense — a crossover with Paper Mario titled Paper Jam. This time around, Mario’s thinnest self joined the party, bringing with him multiple copies of himself for some intensely satisfying combos. The unique feature this time around followed in the footsteps of giant Luigi by having the trio hop on board giant papercraft mechs and clear out swathes of enemies and opposing cardboard creations. 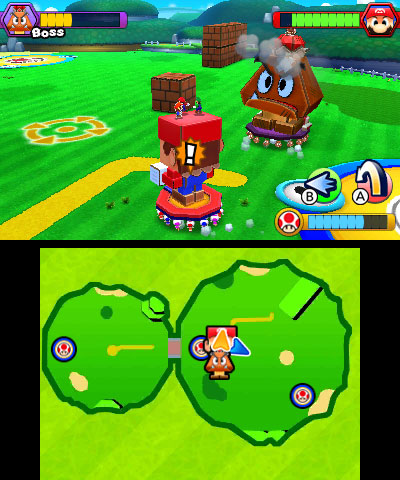 AlphaDream’s last two Mario & Luigi games released towards of the 3DS’ life, and were remakes of both Superstar Saga and Bowser’s Inside Story, with Partners in Time seemingly being confined to history. These have proven somewhat controversial updates, though even these remakes saw substantial new content in the form of Minion Quest and Bowser Jr.’s Journey, two side games that were essentially strategy titles with storylines that take place concurrently to the main game. It just goes to show that AlphaDream was always experimenting with new content, even when the studio didn’t really need to.

With almost two decades of Nintendo handheld appearances, it’s likely AlphaDream’s games reached a lot of people, delighting them with their colorful worlds and ever-inventive spirit. It’s a shame we’ll never get to see Mario & Luigi take advantage of what the Nintendo Switch has to offer, but we can always hope the people behind those classic adventures get to play with even more worlds in the years to come!