It’s not often that a game’s marketing can get you single-handedly interested in an entire genre, but thanks to my anticipation for Daemon X Machina, I’ve spent the better part of 2019 thinking about big robots. Ever since playing the initial demo back in February, I’ve just been wanting more and more. With the game finally released, my thirst for mechas has finally been quenched.

Daemon X Machina has you playing as an Outer, a human being with the ability to pilot a mecha called an Arsenal in an apocalyptic world where pieces of the moon fell to earth, devastating the entire ecosystem. Your Arsenal is designed to fight robots whose AI has been corrupted by substance that appeared alongside the fallen pieces of moon, called Femto. You’ll fight these corrupted machines through a very wide cast of characters over the course of several missions. These missions also have what could loosely be called a story connecting them, but it took a long time for that narrative to really get off the ground and interest me.

There isn’t a single character in the game that I can say I wholly enjoyed; in fact, there are a few characters that are equal parts well-written and cringey-anime tropes. There were plenty of times I was lamenting having to deal with one-note characters spouting nonsense about being in it for the money or how all they were born to do is fight, only to have them hit me with some pretty well-written lines that humanized them, if only for a moment. Overall, however, most of the characters that populate the world of Daemon X Machina seem to be present only for the reason of trying to fill in as many genre tropes into the game as possible. 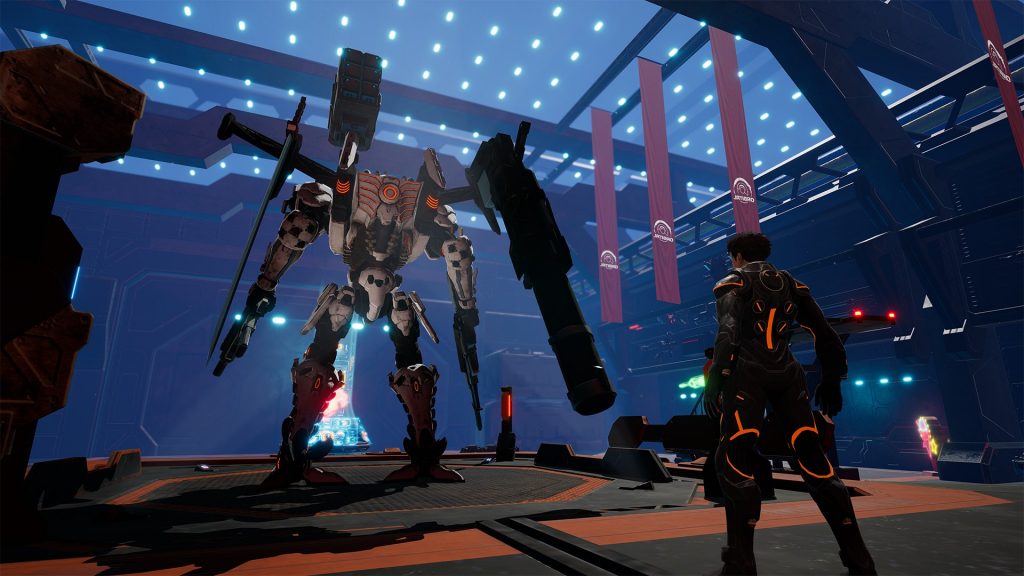 The combat of Daemon X Machina is where the insanity of fighting in a mech suit really shines through, and it works incredibly well as the backbone of this game. Everything about fighting feels great, especially since you can tweak the controls exactly to your liking. There is plenty of speed and power behind your movements, and choices of weapons range from standard gunfare like machine guns, shotguns, and bazookas, to flamethrowers, acid cannons, and laser swords. Zooming around the battlefield destroying opponents is fast-paced, fluid, and is exactly as fun as mech-fighting should be.

Most missions are filled to the brim with smaller enemies like drones, tanks, and cannons, but most offer the chance to fight other Arsenals, and a few offer the chance to fight colossal mechanized monsters. Fighting something so much bigger than yourself definitely takes some time, but it’s incredibly satisfying to zip in and out of range of a giant opponent’s attacks to do damage to crucial weak spots around their body. 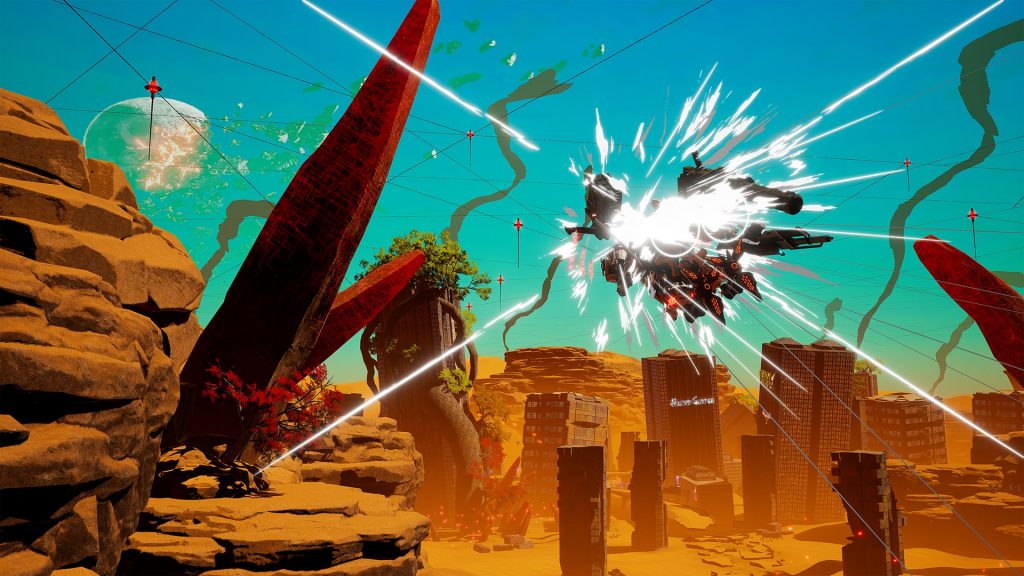 There are only two scenarios where I don’t enjoy the combat in Daemon X Machina — the first is when fighting other Arsenals. They’re a small target that moves very erratically, which made fighting them more frustrating than fun, every single time. The second scenario happens more infrequently, but still enough to make not of it here — when your mech gets destroyed you’ll be forced to fight as your Outer, which makes you feel very small, frail, and highly immobile compared to fighting in the Arsenal. Every time I was required to do it, I felt like a rag doll getting thrown around by explosions, barely getting time to get my feet under me and get any shots off. But when I did, it felt like those shots did far too little damage.

Despite how great almost all of the combat is, what really started to get to me after awhile was how repetitive so many of the missions felt. Too often I’d start a mission, get either most or all of the way through it, only for some opposing mech pilots to show up and exclaim that they were on a mission that was the exact opposite of mine. At this point, I’d have to fight them, and, as stated before, get frustrated by it. There also wasn’t enough variety in the standard enemies in several of the missions, meaning that you can easily work your way past wave after wave once you learn their patterns. Several times in the early game I felt like I was simply too powerful, zooming around destroying everything in sight with little opposition — before an enemy mech had the chance to show up, that is.

Though the great combat is the backbone of Daemon X Machina, the amount of customization options available really helps flesh it all out. Right off the bat, there are plenty of options for customizing your Outer, and you’re able to go back to the character customization at any time to change whatever you want — nearly everything, including your gender, can be changed later on, with the exception of your name. The game also gives you full control of customizing your HUD, you can reposition, resize, or get rid of every single element to suit your needs. Alongside HUD customization, the controls are also entirely remappable, including the ability to set two different buttons as function keys, allowing you to hold them down to give every other button a second function if you so desire.

It wouldn’t be a mech game without being able to customize your mech, however, and I’m happy to report that your Arsenal is probably the most customizable element of the game. You can scavenge Arsenal parts and weapons from other Arsenals once you defeat them, and you can also craft new Arsenal parts and weapons, using other parts and weapons as material, in the game’s factory. On top of this, beating bosses will grant you blueprints to build special weapons with as well. All parts come with their own set of stats and abilities, and can be mixed, matched, and individually recolored to create your dream Arsenal (which you can then give a custom name).

I’ve spent far too much time trying to create the perfect-looking Arsenal, without any regard to the abilities involved. I could probably create a stronger Arsenal by matching together parts with cohesive abilities, but I’m having plenty of fun just by making cool robots — and that’s what really matters.

Overall, Daemon X Machina has come a long way from the Prototype Demo released back in February, with a lot of improvement in the combat department. Everything feels more put-together than it did back then, and it really seems like a lot of the player feedback was taken to heart, which I appreciate. The combat is entirely enjoyable for fans of the genre, though the story and characters hold the game back a little. Thanks to the combat and the customization, I know I’ll be coming back to Daemon X Machina — at least for short bursts — for a long time to come, especially when I’m in the mood to blow up giant robots with a laser sword. 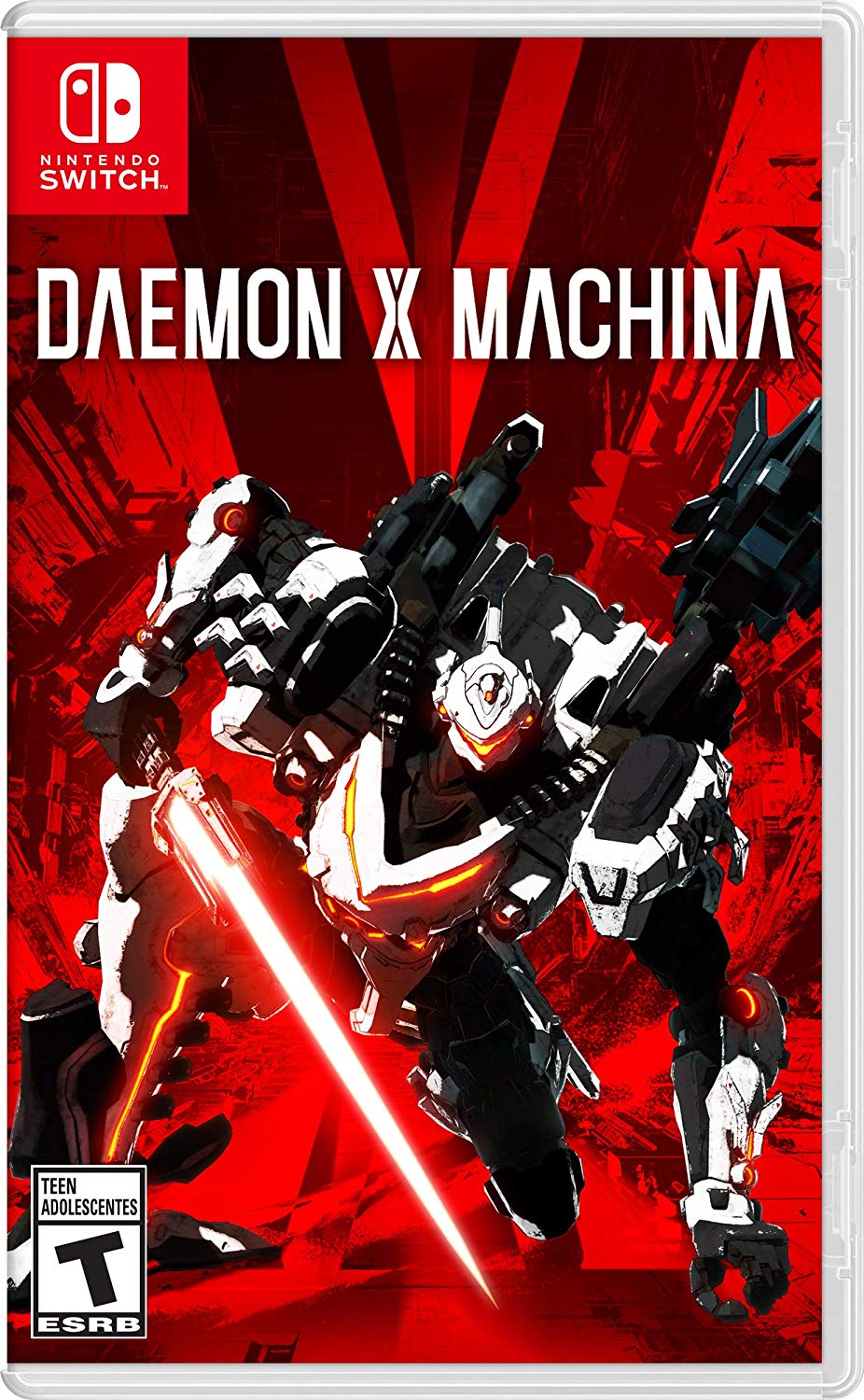