With a fond Farewell, Celeste cements itself as one of the greatest platformers of all-time

It can be difficult to tell just how much a piece of art will resonate with an audience — or even just one person — shortly after release. There have been plenty of books, movies, tv shows, and comics that I finished feeling dazzled and amazed, only to forget about a week later. The greatest metric by which we can measure the quality of a work is time. If you’re still talking about, thinking about, and re-experiencing a piece long after it’s been put out into the world, then it has captured that rare distinction of quality that makes it impactful.

It’s admittedly hard to quantify when, exactly, that longevity is established. But in the year and a half since Celeste’s release, and with the drop of a recent free downloadable bonus level, one thing has become clear: it stands at the pinnacle of its genre, and has established a mastery of form, design, and execution that few — if any — games can dare to achieve.

I’m not sure it’s possible to comprehend every level on which Celeste works. Every part simply gels together so organically and effortlessly that you assume it’s the product of some wizardry. Every aspect, from level design to gameplay mechanics to soundtrack to dialogue, coheres to a central theme of failure and perseverance, gently encouraging you to push forward in spite of seemingly impossible odds. Much of Celeste’s beauty has already been detailed both by myself and in our original review (penned by the picture-perfect prose expert Matthew Weidner), but the new content released just a few days ago — Chapter 9: Farewell — has only reminded me of just how flawless this game truly is. 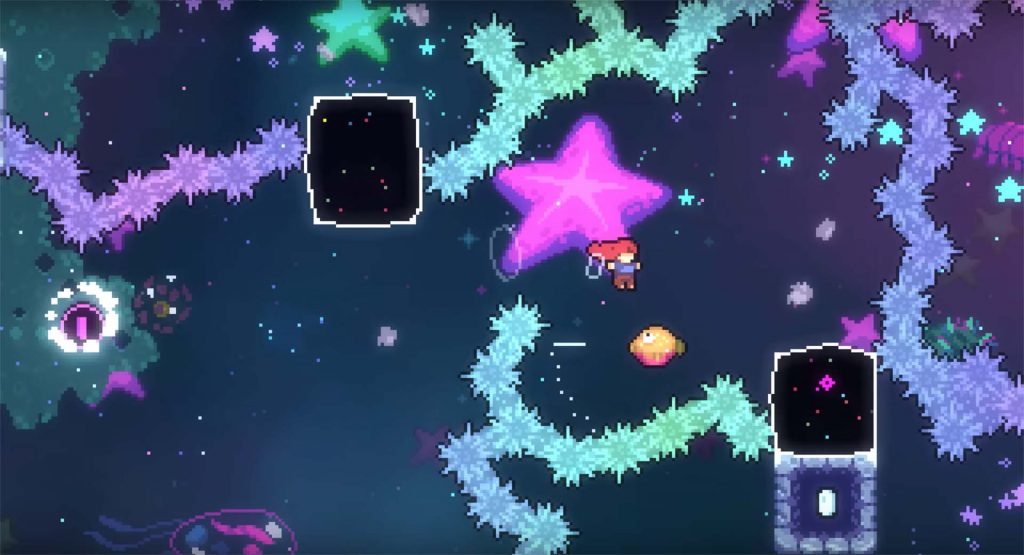 Farewell takes place in a dream state, as an epilogue that continues the game’s narrative and themes in an extensively personal way, as Madeline — rejecting her other self — seeks to make one last goodbye to someone precious to her. It builds beautifully on its previous depiction of struggling with mental health, showcasing that even after climbing the mountain, Madeline’s fight is ongoing, and that she may not always be her best self. It’s a notion that’s very realistic, and the writing threads the needle around delicate lessons with great finesse. Even if the ultimate message isn’t the freshest I’ve ever heard, the execution of how it displays that message is wonderful.

Celeste, of course, excels in just how it conveys that struggle through its game design. It’s the apotheosis of the idea of (if I may use a Serious Game Critic term) ludonarrative resonance, where the mechanics are a proponent of the game’s overall message. So it is in Farewell, where Madeline faces arguably her toughest slate of levels yet, and you’ll have to flex your fingers with finesse if you want any chance of succeeding.

The beauty of Celeste’s difficulty is that it never feels cheap or aggravating. Death comes often and quickly (I died over 2800 times playing Farewell, and I feel like that’s a lowball), but it takes no time to get back into the action and give the level in front of you another shot. There is little AI or randomness — the movement and behavior of almost every object within Celeste is dictated by the player’s actions rather than the sporadicity of an algorithm. The controls are tight and fluid. The challenges are precise and varied. Every failure feels like a direct consequence of the player’s action — but so too does every success, making every cleared screen a thousand times more satisfying than potentially otherwise. 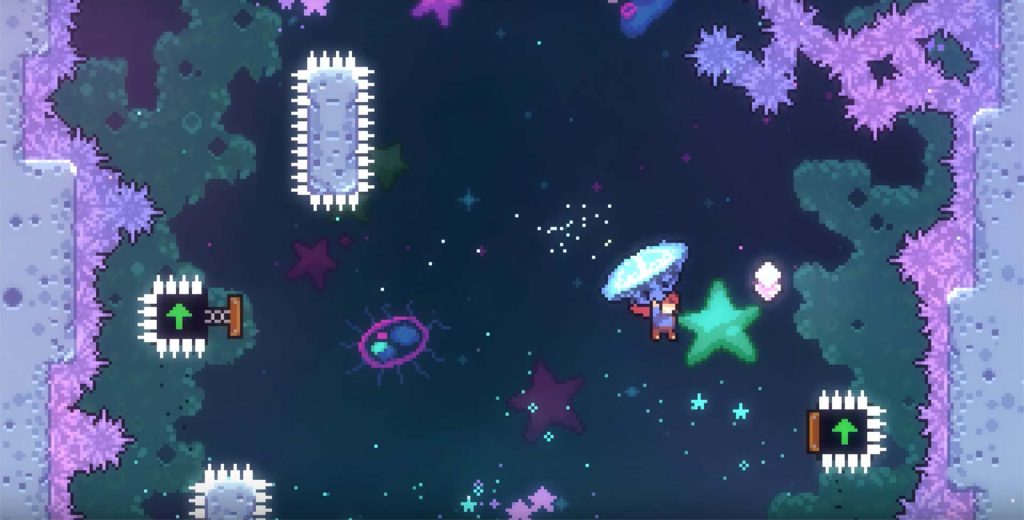 Even the game’s aesthetic is suited to this gentle push of difficulty. The game’s art direction is vibrant, and the pixelated style allows for a greater sense of precision with obstacles and movements. Lena Raine’s ambient soundtrack can range from soothing to haunting to downright inspiring, but things are never so high-octane that you get caught in the heat of frustration. Celeste certainly has its share of tense moments (look at the Mirror Temple, where nightmarish psycho-monsters hound you at every turn), but on the whole it goes for the subdued, letting you soak in the atmosphere at your own pace.

What makes Farewell stand out from the rest of the game is a sensation that I’ve only felt from one other 2D platformer — Donkey Kong Country 2: Diddy’s Kong Quest, which was, prior to Celeste, my favorite example of the genre. That game’s Lost World serves as a sort of gold standard for bonus levels — taking simple ideas implemented throughout the game and mixing, matching, and cranking them up to absurd levels while somehow tossing in new ones. If Object A tests your timing, and Object B tests your precision with jumping, then putting them together will test both in tandem. That’s what makes Chapter 9 in Celeste pop: taking a scattershot of level mechanics from throughout the game and tossing them in a chop suey along with new ingredients, while also demanding that you master new movement techniques (such as the wavedash, previously required in only one other level) to succeed.

The end result is a vivid, emotional trudge through over a hundred new screens, each more daunting and puzzling than the last. Some play out like puzzles, where you have to understand precisely how to operate your precious supply of dashes in order to achieve your goals. Others require lightning quick reflexes and learned patterns. And yet more require every ability you possess in order to execute the needed maneuvers properly. 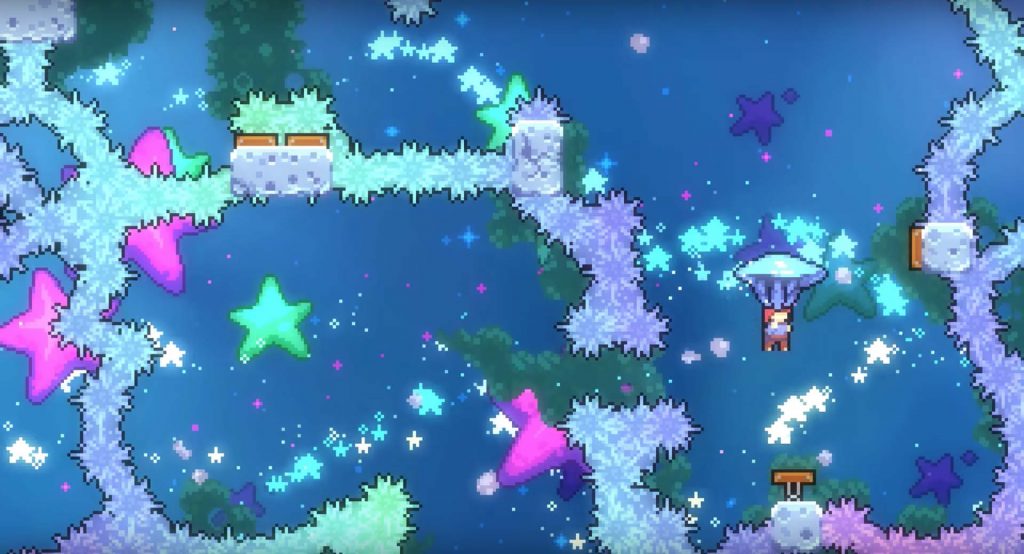 But what really makes this epilogue chapter so sweet is simple: it’s more Celeste. For absolutely free. It’s bigger, harder, and loftier than the rest of the game, but it carries the same genius throughout. And playing through it, I was only reminded of just how positively stellar that base game is. Beating Chapter 9, I wasn’t filled with a sense of “finally, I can move on to some other game” — I wanted to reboot from the beginning and go through it all over again.

There are several games from the past five years that I know we’ll be talking about for a long time — The Legend of Zelda: Breath of the Wild, NieR: Automata, Undertale — but even among that throng, Celeste stands out as something special. It stands at the apex of its craft: perfectly polished, divinely designed, beautifully built. It operates within the constraints of its medium to impart something that only video games can. It’s warm, and assuring, and inspirational. It is the best 2D platformer I have ever played.

And I know that whenever I feel frustrated, or discouraged, or unsure of myself… that the mountain will be there, just waiting for me to climb it.