That’s just one instance of the comic chaos that can unfold in Marvel Ultimate Alliance 3, and it is glorious.

Out of all the retired franchises for Nintendo to revive, none could have assumed they’d pluck Marvel Ultimate Alliance out of the pile, and fewer still would have guessed they’d hand the development reigns over to Team Ninja.

Yet the combination is almost perfect in hindsight – Nintendo’s Switch is well suited for such a co-op friendly game, while Team Ninja has made a name for itself with frantic action games like Ninja Gaiden the co-development of Hyrule Warriors with Omega Force. Combine those strengths with the massive IP potential of Marvel, and it’s hard to go wrong. 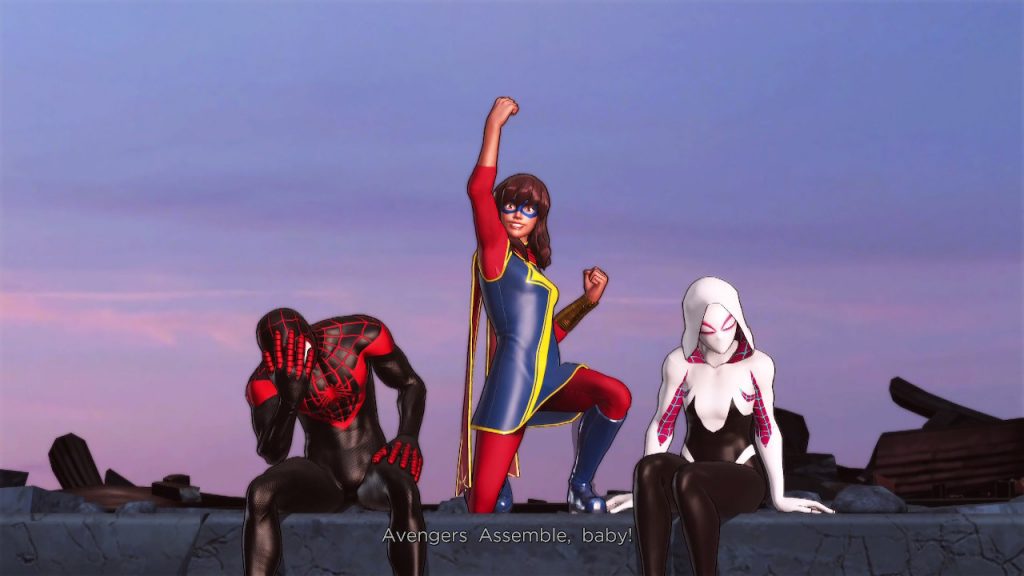 Unfortunately, there are a few missteps, but we’ll get to those in time. Read on, true believers, for the full rundown.

Like its predecessors, Marvel Ultimate Alliance 3 is a top-down action adventure RPG. For the most part you’ll be busting up enemies, and while there are occasional puzzles to break up the pace, the fisticuffs really are what you’re there for, because they’re a blast.

Each character has their own combo strings with light and heavy attacks, plus a variety of special moves you unlock and upgrade. At first I assumed there’d be a lot of overlap, and while certain moves share utilitarian similarities, every character feels distinct. Nowhere is this more noticeable than with Spider-Man, Miles Morales, and Spider-Gwen having distinctly different playstyles when they could have easily been palette swaps. 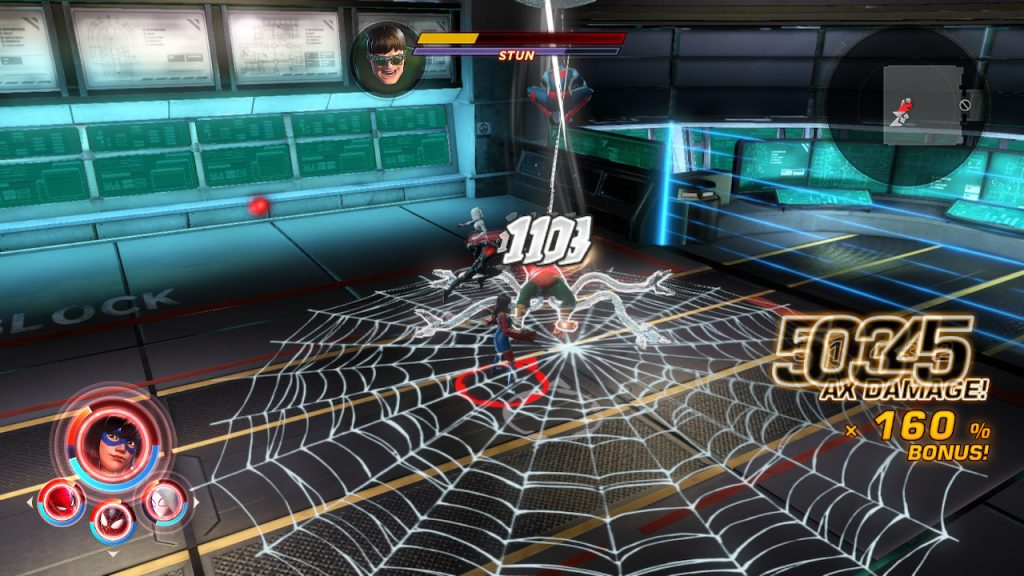 The sheer variety of heroes is also amazing. While the well-known legends like Spidey and Iron Man bust onto the scene early on, you’ll soon recruit lesser known, but still beloved, characters. Ms. Marvel is an early standout star who never left my group, and I had no idea who Elsa Bloodstone was, but after her brilliant debut in the game, I want to start reaching into the back issues.

Don’t worry if you think you’ll be left in the dark, either. The Extras menu features a wide variety of humorous bios written by Rocket Raccoon and commented on by the other Guardians of the Galaxy. If you wish the most recent Avengers movies delivered more meta commentary on how absurd the Marvel universe really is, you’re in for a real treat. 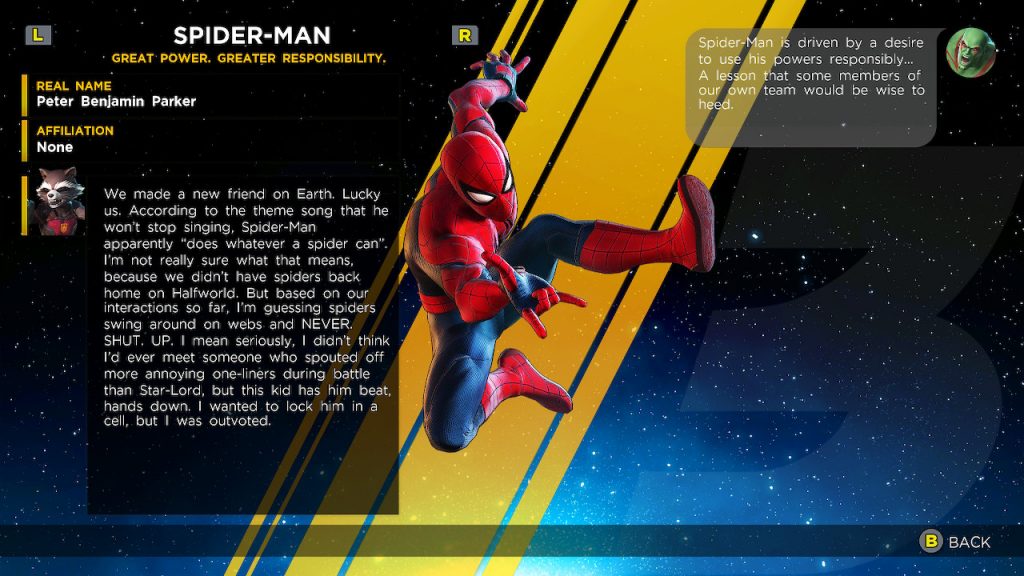 At all times you’ll be rolling with four heroes, each accessible in single-player with a tap of the D-pad. While you can just roll with whatever random crew you have in mind, you’re lightly encouraged to do some theming thanks to the team bonuses, which include the obvious Avengers, Guardians of the Galaxy, Defenders, and X-Men line-ups, alongside more conceptual groupings, like the younger fighters being under the “Generations” umbrella. These are rarely stifling, but dedicated players will likely find some ideal combinations to boost important stats. 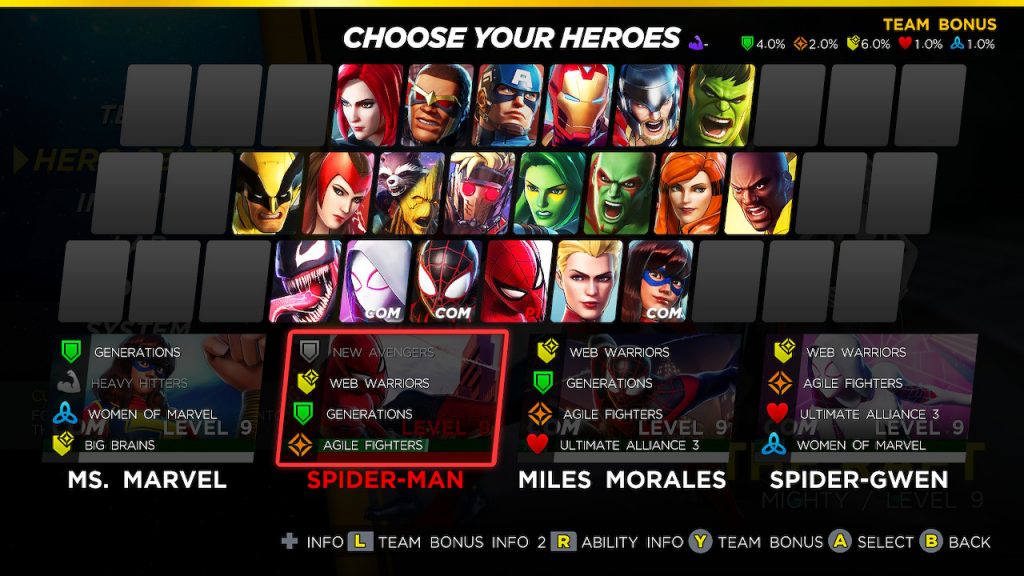 It is worth noting, however, that you’ll have a hard time keeping every character leveled equally. Characters who aren’t in your party won’t receive any experience, so it’s in your best interest to pick your favorites early on, swapping in newcomers as they crop up, as their levels match the surrounding area. That’s not to say the characters you leave behind will languish at level 8 forever, though. Throughout the story you’ll come across XP Cubes that you can spend to boost anyone’s level up without having to grind too much.

That said, you might want to save some of those XP Cubes for your main team, as on the normal difficulty setting – “Mighty” – the game can be quite brutal. In the early chapters you’ll find even the average enemy can give you a hard time, chipping away at your health and busting you out of your combos, and it’s only when you unlock the Alliance Enhancement chart that you get to mitigate these risks. Filling it out will be no easy feat, however, and you’ll often find yourself coming toe-to-toe with some genuinely challenging fights. If you’re expecting a mindless button mash brawler, you might be pleasantly surprised, though some of the difficulty spikes are still ridiculous.

Yet with AI assistance, the difficulty can be a curse. Expect to see your partners frustratingly run into attacks time and time again, and, more rarely, they may be on the other side of the arena when you’re desperately trying to unleash a Synergy attack, where you combine your specials into one powerful, stunning blow. With enough experience these issues can be bypassed with sheer brute force, but it does mar the experience if you’re playing solo.

The main story of Marvel Ultimate Alliance is a fun ride, but most of the game’s content lies is within the Infinity Trials. Anyone familiar with Koei Tecmo’s Warriors’ games will feel right at home here, as areas, enemies, and bosses from the story or mixed up to form new challenges. Some will have you beat up Doctor Octopus when the only viable attack method is your abilities, while others are timed affairs where defeating enemies adds some more seconds to the clock.

The most common unlocks from Infinity Trials are the orbs and cubes necessary for leveling up your heroes, but you’ll also gradually unlock bonus costumes. Unfortunately, these are simple palette swaps, and while they can contain cute references to the heroes’ other appearances, it feels like a missed opportunity to cover more of the history behind these beloved characters. We can only hope the DLC introduces more elaborate outfits. 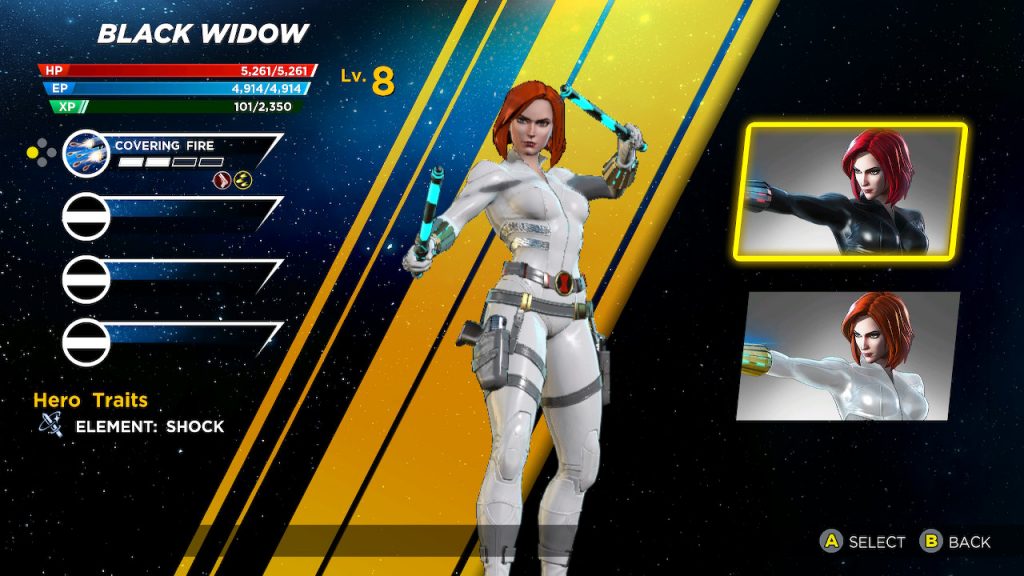 While aesthetic customization of your party is somewhat limited, there are way to change up their stats thanks to ISO-8. These crystals can imbue your characters with stat changes, such as Vitality +20, as well as increase the rate at which you gain experience and expendable credits. This lets you make the characters your own – want to make the Hulk even more of a tank? Go for it.

Marvel Ultimate Alliance 3 is a real treat for anyone with any passing interest in Marvel’s many, many super heroes. Rather than simply basing itself fully on a single adaptation like the movies, it picks and chooses the most iconic depictions of the characters. That means you’ll have Captain America and Iron Man rocking distinctly MCU duds, while the X-Men are a fantastic throwback to the beloved ‘90s cartoon, with vibrant blues and yellows.

Despite these potential discrepancies, the story makes it work. After the Guardians of the Galaxy stumble upon the Infinity Stones and manage to pull them from The Black Order’s grasp before their leader Thanos shows up (so far, so MCU), they’re warped to the Raft prison complex, where you quickly meet Spider-Man and face off against his iconic rogue’s gallery, one by one. This does wonders for the game’s pacing, as in one chapter you’ll be battling ninjas and the next, Ultron drones. 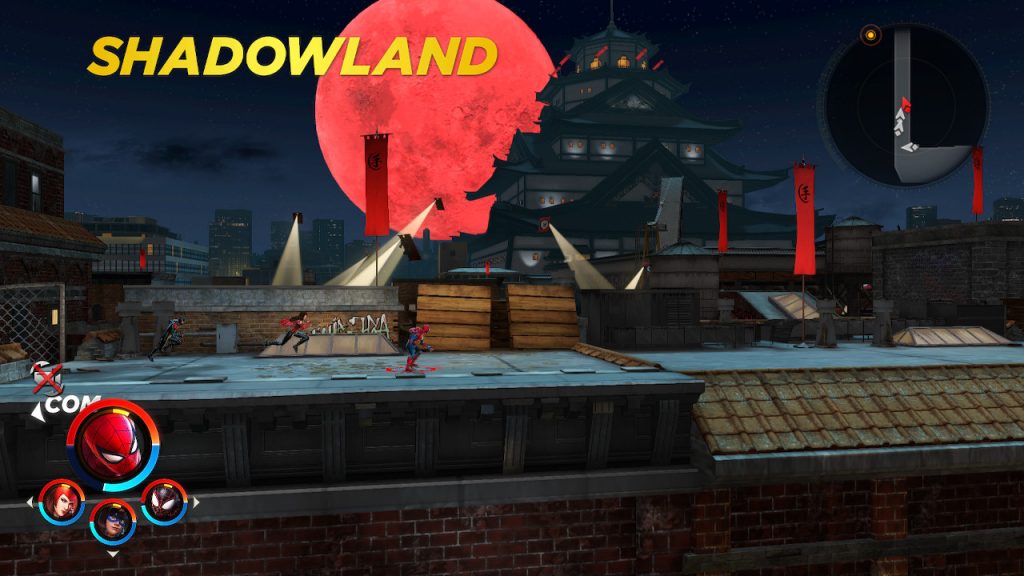 The characters each get their moment in the spotlight, too, with fantastic voice acting from some familiar faces, like Yuri Lowenthal as Spider-Man, reprising the role after just starring in the brilliant PS4 game. While these introductory cutscenes do wonders for introducing characters at their best, it’s also fun to see them pop up around checkpoints, where you can get the chance to initiate some one-sided dialogue with them to get some lore and quips.

Marvel Ultimate Alliance 3 is a game built on screen-filling chaos, and that naturally takes its toll on the frame rate, but not as often as you might expect. Chances are you’ll find the camera more frustrating, as it can find itself behind foreground elements, obscuring your vision. When controlling one character on one screen you can change to an alternate camera system, named “Heroic,” which zooms in. This introduces its own issues, however, as you may not know where enemy attacks are coming from when things are so up-close and personal.

While these choices are unfortunate, my biggest issue with the game is one I couldn’t have foreseen: the audio balancing. Contrasting the game’s bombastic presentation, the music is frequently far too quiet if not outright nonexistent, and hits can land with unsatisfying thwacks. This is despite the individual audio settings being set to max by default.

The audio issues are made even more frustrating considering the snippets of music that you can hear are genuinely great, similarly calling back to the characters’ most iconic appearances. The X Mansion is backed up by some shreddin’ guitars reminiscent of the amazing cartoon opening, while the Avengers are given an orchestral score not unlike their movies. If only the tunes could be listened to more reliably.

Marvel Ultimate Alliance 3 is a game for any kind of superhero fan, whether you were introduced to its characters through the comics, the movies, the TV shows, or the classic cartoons. But that’s not to say its appeal is only skin deep. With so much content to dive into and characters to master, there’s plenty to keep coming back to, and we already know the game is set to grow even more with both free and paid DLC.

Then again, the Wasp can summon a giant fidget spinner, and that might just mitigate everything I just said.