Since the early ’90s, the Puyo Puyo series has been a popular staple of Japanese competitive play. A cursory glance at YouTube will bring about plenty of tournament footage, and it can be a little intimidating knowing there are people who can regularly pull off huge chains of Puyo pops. Maybe you had fun recently with Puyo Puyo Tetris’ mix of puzzles, or maybe you have memories of Kirby’s Avalanche or Dr. Robotnik’s Mean Bean Machine back in the 16-bit era, or maybe you’ve never played Puyo in your life but like the look of the game and it’s cute cast of characters. Whatever the reason, a new and perfect (re)entry point to Puyo has just dropped into the eShop at a super affordable price. Now it’s on you to take that first step towards becoming a Puyo Puyo Champion yourself.

The most important thing to note about Puyo Puyo Champions (known as Puyo Puyo eSports in Japan) is that this isn’t a “full” entry in the series. Comparing this to older titles when it comes to content wouldn’t exactly be fair. There’s no story, not a lot of variety in play modes, and not a hint of Tetris. While that sounds like a step back, this game is also only $9.99 by default, and with that low entry price you get access to the two most popular types of Puyo gameplay both for local and online multiplayer, along with an already-present community of players courtesy of its earlier Japanese release. 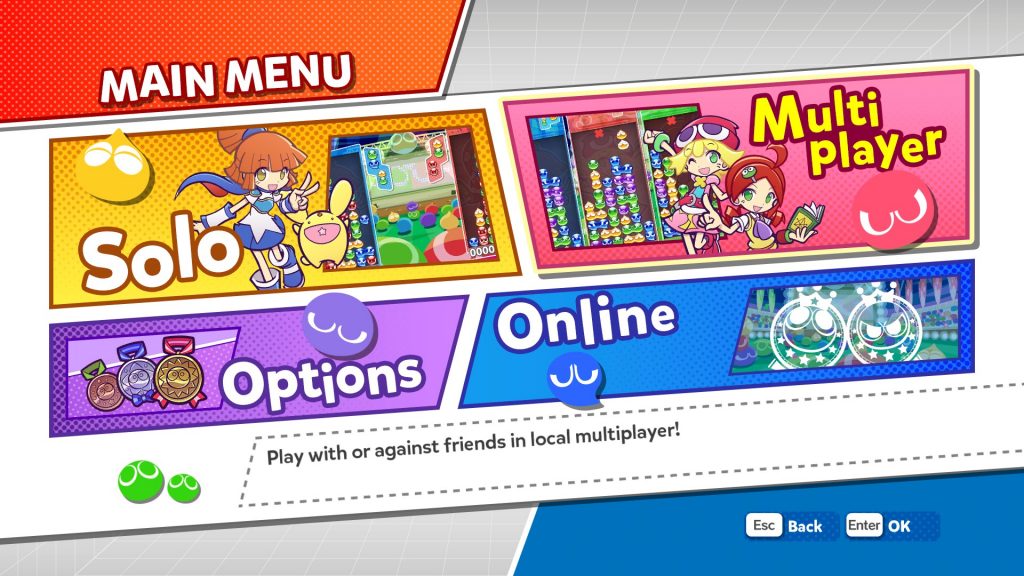 These two modes are Puyo Puyo 2 (or Tsu), and Puyo Puyo Fever. Both represent turning points in the series’ lifetime and make for the perfect sampling of what makes this match-four so addicting and long-lasting. Puyo Puyo 2 is the “default” mode and the one that made the series a puzzle mainstay. By connecting like-colored Puyo together you’ll send obstructive, colorless Garbage Puyo to your opponent’s board. By arranging them in a way where one match triggers another match, making a chain of triggers, you can send more Garbage at once to overwhelm and block off access to Puyo on your opponent’s board. Even better, if they’ve sent an attack at you and you set off a Chain that’s bigger than their attack, you’ll offset their combo and send it right back at them!

The other mode, Fever, was pioneered when Sonic Team took over production of the Puyo series, and it might look familiar to anyone who got on board with the series back on the GameCube when it was localized as Puyo Pop Fever. It plays similarly at its core, still requiring you to match four and produce chains, but a few key differences make for a unique experience altogether. For one, different arrangements of Puyo can come along, like “L” shaped groups of three Puyo or square-shaped groupings of either one or two colors. It’s also possible to hold off attacks by making a single match at a time here, meaning you aren’t completely out of luck if your board’s a little scattered. What really defines the mode though is its namesake: Fever. 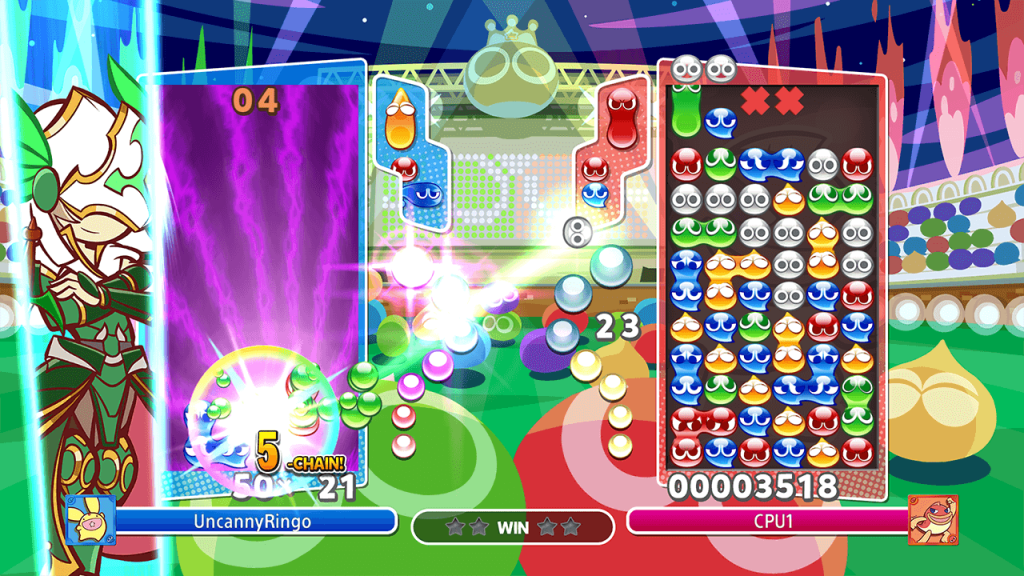 By attacking and offsetting you’ll build up both a meter and a number. Once the meter is filled, your board will flip into pre-set chains that you can easily trigger, making for massive attacks that reward reflexes and observation more than planning. The number you’ve built up is how long you stay in the mode, sometimes giving you a whole half a minute of Fever to work with. All this together both makes Fever more complex (thanks to its differing systems at play), yet more accessible by giving beginners a little taste of what they can build towards. It’s a welcome part of the experience and one that I’ve put the most of my time in Champions into.

This pattern of building chains and knowing when to trigger one for either offense or defense is what gives Puyo Puyo its rhythm. It takes time and practice to know what patterns to build to make really big chains, but even at an entry level of play the game is fun and fun to watch. A lot of that comes down to its character roster, a grab bag of colorful designs and enthusiastic voices that add some personality to these puzzle fights. They even determine your drop order of Puyo when playing in Fever, giving them notable differences in that mode beyond sights and sounds. There’s also dual audio this time around, letting longtime fans use the voices and lines they’re more familiar with while others can stick with the newly recorded and still well-done English voices. 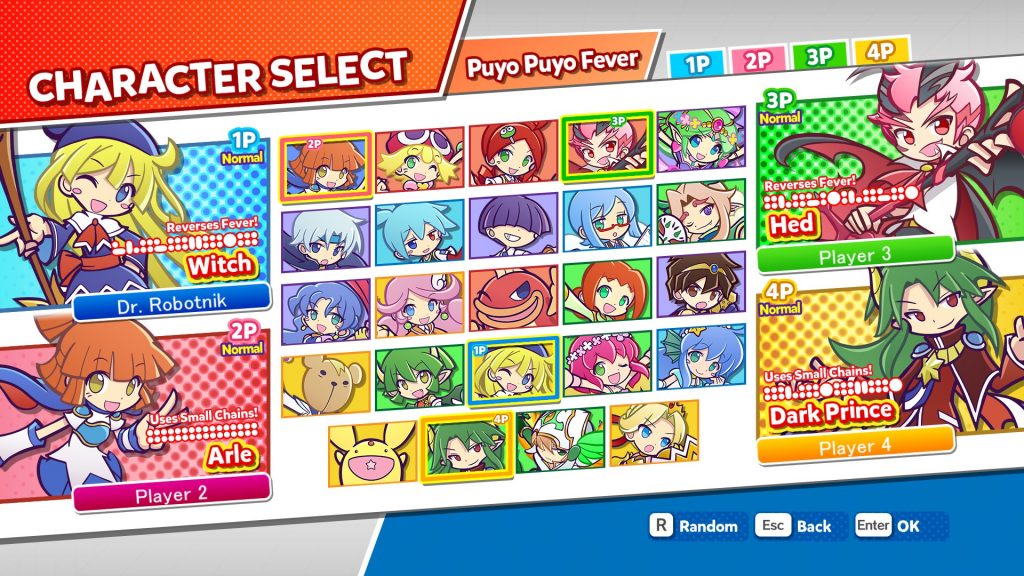 While it’s possible to play around with Battle (take on opponents in single matches) and Endurance (see how many opponents you can defeat in a row) modes in single-player, you’re going to get the most out of Puyo Puyo Champions by playing with others. Multiplayer lets you set up matches and tournaments easily, and online has been solid so far — even when playing against Japanese opponents. While there are currently no tutorials or practice modes in the game to warm up with and learn a little from, there are plenty of resources and communities already existing for the game to help in that department. Some greater in-game integration would help for novices or those returning to the series, though.

There are just a few overall gripes with Champions. Assets and menus are lifted pretty much wholesale from Puyo Puyo Tetris itself, which is admittedly a more fully featured game with unique and varied gameplay opportunities. If you know you’re a fan or think you’re not going to get much mileage out of Fever, then PuyoTet might be the better option. The game’s also dropped both the Tetris based characters and some longtime favorites from the roster to make way for ones from Sega’s mobile hit Puyo Puyo Quest instead. It’s sad to see Lemres and Ecolo gone, but it ultimately gives the game a bigger character lineup and brings back some even older faces.

Puyo Puyo Champions is an interesting game in that it’s perfect for beginners and longtime fans, but maybe not those “in the middle.” The game’s affordable for newcomers, not too overwhelming with rule sets and features, and it gives the purest dose of Puyo available. For those who love the series, it’s a chance to revive the online scene and get that Fever going again. I’d still recommend it to pretty much anyone as it’s a series with a lot of heart, depth, and thrills going on beneath those cute characters shouting spells at each other. If you want the most Puyo on Switch you should turn to Puyo Puyo Tetris, but if you want to dive right in on the cheap and show the world what you got, then make no mistake — Champions was made for you.