We all know the classic Nintendo antagonists — Bowser for Mario, Ganon for Link, and capitalism for any Animal Crossing villager. But it’s clear that for one green dino, his greatest foe is not Bowser Jr. or any of his cronies — it’s the United States Government. Previously we thought the prehistoric purloiner was the villain, committing tax fraud as an open (and now verifiable) secret. But now, black and white becomes gray, as new shocking evidence has emerged that may implicate the Stars and Stripes as the one who cast the first stone. 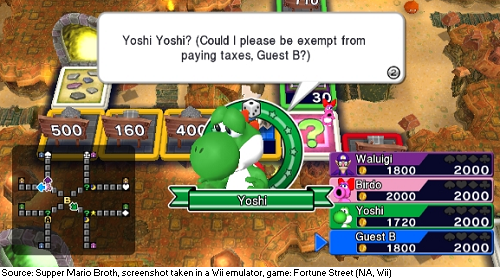 It goes like this: the Environmental Protection Agency has a flash game on their website called Recycle City Challenge. Discounting the… outdated aesthetics (I’m 99% sure the game is from 1999, yet there’s no way it was made before the mid 2000s), the game had until a short time ago a music track accompanying it… ripped straight from Yoshi’s Island DS. Meaning the EPA was using Nintendo’s music without permission.

But who was the instigator? Was the music usage retaliation for the vile velociraptor’s illicit tax forms? Or was Yoshi framed in order to cover up bureaucratic incompetence and outright thievery? Who tells the truth, and who lies? Only time — and the truth — will tell who is right and who is wrong, and who justice shall be served to.

Thanks to @forestillusion for the info. Story via Game Informer.